CHARLOTTESVILLE, Va. — Today the Charlottesville Buffalo Bills Backers will gather on the second floor of Trinity Irish Pub, where picture windows look out onto the red-bricked, white-columned grounds of the University of Virginia.

That’s a fitting view for Bills fans. Ralph Wilson, the team’s late founder, was a UVA grad, Class of 1941.

The pub will be packed when the Bills play at Houston this afternoon in search of their first playoff victory in 24 years — since they beat Miami 37-22 at Rich Stadium on Dec. 30, 1995.

“That’s a long time ago, isn’t it?” muses Bob Sweeney. “We are a long-suffering fan base, but we’ve had our glory days, too.”

Sweeney, 69, is senior vice president for advancement emeritus at UVA, where he orchestrated more than $5 billion in giving — yes, that’s billion with a B — during a 25-year tenure there. 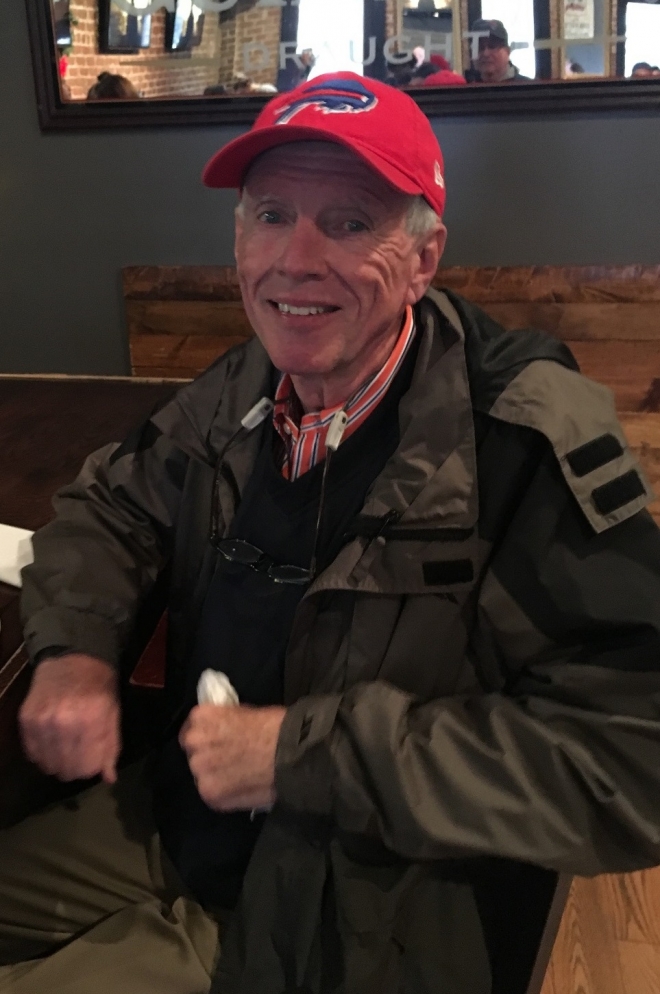 Charlottesville, Va., Bills backer Bob Sweeney grew up in the Town of Tonawanda and has never given up his allegiance to the Bills.

Sweeney grew up in the Town of Tonawanda and graduated from Cardinal O’Hara High School and Niagara University and has never given up his allegiance to the Bills.

And so on NFL Sundays he blends in with the rest of Charlottesville’s Bills backers. This motley crew is a mix of erstwhile Western New Yorkers who hang on to their hometown allegiances and Central Virginians who root for the Bills for reasons even they can’t explain.

Will Owens is a 16-year-old student at Monticello High School who knows the Bills’ roster by rote. His bedroom walls are chockablock with Bills memorabilia. He comes to watch games at Trinity sporting his No. 17 Josh Allen jersey. And his father, who brings him, is mystified by it all.

“I’m from Denver and a huge Broncos fan,” Lewis Owens says. “He’s a Bills fan and I don’t know why. He knows every stat they have. What can I say? He’s a Bills freak.” 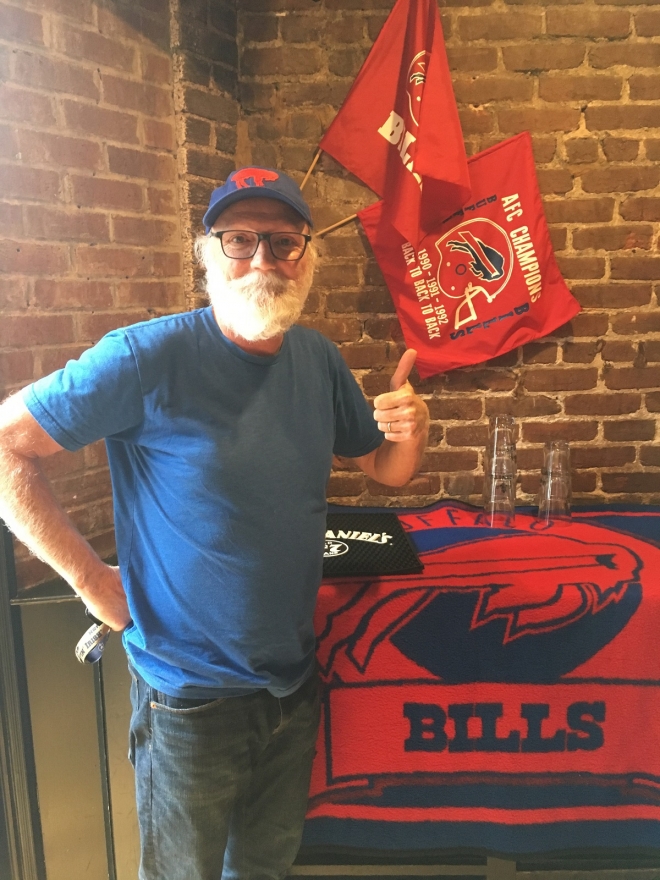 Phil Pfeifer  grew up in East Aurora and remembers when the original Bills held training camp there on the Knox family polo fields.

Erik Brady
Is the White House in Buffalo's future? On HBO, it is.
Author has Buffalo to thank for his latest book – and his grandsons
Jan Stenerud's journey to NFL immortality started in Buffalo – with a lift from Larry Felser
If you thought Deion Sanders was amazing, you never heard of Luke Urban
More Stories

Phil Pfeifer, 68, grew up in East Aurora and remembers when the original Bills held training camp there on the Knox family polo fields. Pfeifer is professor emeritus of business administration at UVA’s Darden School of Business, where he started teaching in 1980.

He’s at the pub with his wife Donna and his niece Adriane Neumeister, all in their Bills attire. Everyone in the place seems to know everyone else. The Bills are their bond.

“Hey, have you talked to Patrick Webb?” Pfeifer says. “He’s the guy who got this started.”

Webb moved to Charlottesville in 2006 and built a Myspace page to find other Bills fans. He wanted a place to watch the games with other Bills fans, like McFadden’s in New York, where he’d been going for years.

He’d heard there was a Bills bar at the local Holiday Inn, but when Webb got there, decked out in his Bills finery, he was the only Bills fan there. Then the bartender gruffly informed him they only showed Washington games.

Eventually Webb found other Bills fans and they gathered for several years at a joint called the Lazy Parrot before moving a few years ago to Trinity, where today they’ll eat wings and weck and drink draft beer in heavy Bills pint glasses.

Webb grew up on Long Island and latched onto the Bills when the Jets and Giants moved to New Jersey. “The Bills,” he says, “are New York’s team.”

“Just because many are not right,” Webb says with a laugh, “does not make me wrong.”

Eric Hill is polishing off a plate of passable wings and drinking a Labatt Blue. He’s from Bath, in Steuben County, where his parents were big Bills fans during the Super Bowl years. Hill didn’t care for the Bills. 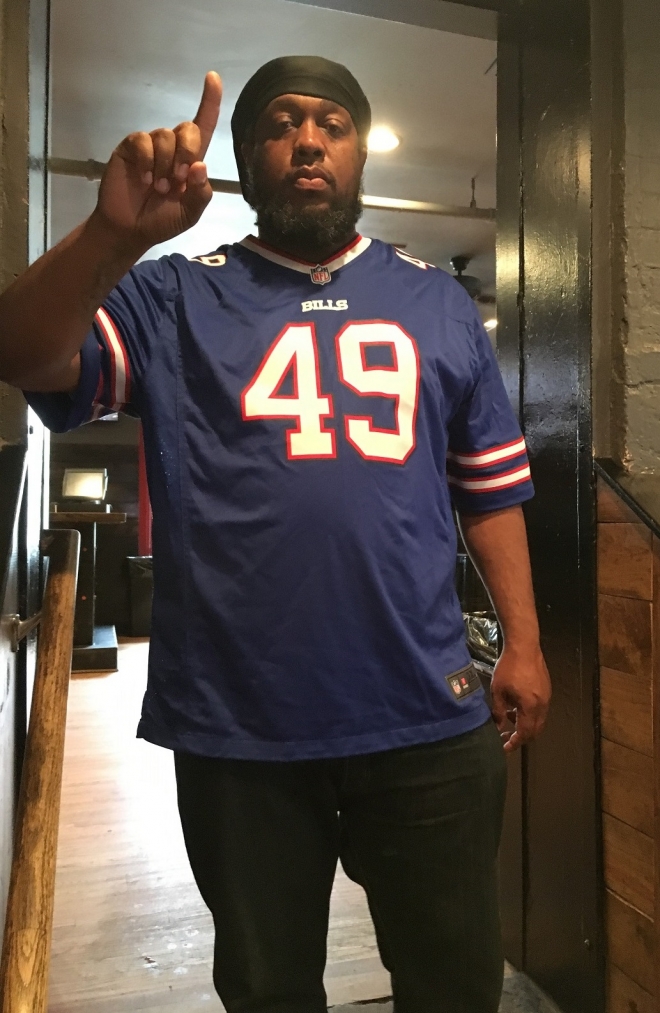 Thomas Gray roots for the Bills because he loved Bruce Smith, the Hall of Famer out of Virginia Tech.

Thomas Gray is having the wings as well. He has lived in Charlottesville all his life. He roots for the Bills because he loved Bruce Smith, the Hall of Famer out of Virginia Tech.

Well, sure, but the Bills have suffered tough times since Smith played his last season in Buffalo. That was 20 years ago. Why would Gray stick with a losing team from a far-off city to which he has no ties?

“Loyalty,” Gray says. “That’s it. All you got is your word and what you stand for.”

His son Tytavius was born on Dec. 29, 1995. The Bills won that long-ago playoff game against the Dolphins the next day — and, as we know, none since. Gray opens his wallet to show three Virginia Pick-4 lottery tickets. He’s picked the same numbers on each: 1995.

Hey, from Buffalo to Charlottesville, maybe this, at long last, is our lucky day.