HOUSTON – Veronica Borjon has stayed busy offering a few surprises. She and her kids drove nine hours from Dallas not long after Christmas to show up on the doorstep of her delighted mother and her family, in El Paso. Her grandfather, Margarito Esparva, is now 95, and Veronica wanted her kids to have the chance to really spend some time with him.

Certain opportunities are fleeting and precious. It is a lesson she carries with her today, to Houston.

Borjon was the longtime companion of Ezra Castro, the Texas-raised Buffalo Bills fan known as “Pancho Billa” who achieved a beloved stature not quite like anything else in team history. In an April 21 text message exchange, he predicted the team would make the playoffs, with an exclamation point, but also offered these words:

He died at 39 in May from cancer. It remains unbelievable to Borjon, and to so many who loved Castro, that he will not be here for what would have been one of the great moments in his life. His Bills, with their finest team in years, will take on the favored Texans on Saturday in a game with so many emotional levels it is difficult to know where to begin. 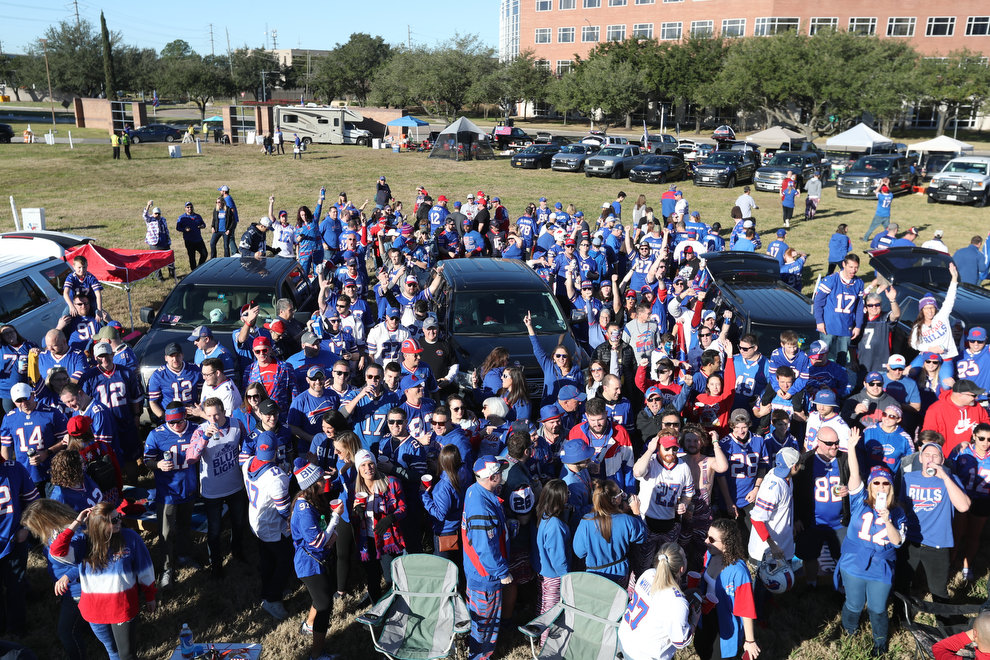 For Buffalo, it is yet another moment of franchise destiny involving Texas. There is Castro, the Texas-born legend whose tale is a second soul for the whole season.

There is Houston, a city that was part the original American Football League and whose teams have been involved in several threshold games in Buffalo football history, including the Bills first playoff win in more than 23 years on New Year's Day of 1989 and a Buffalo comeback that is now iconic within the sport.

There are the players who come home today, like Jerry Hughes, who grew up near Houston and is one of only a handful of active Bills experiencing a second playoff game.

The setting is NRG Stadium, the gleaming arena next to the crumbling Astrodome. That fabled landmark – built in 1964 and the template for what became an acrimonious Buffalo stadium debate – was the scene of many great moments in a Bills-Houston rivalry that dates to the 1960 birth of the old Oilers, now the Tennessee Titans.

Athletics at their best involve echoes, and this game reverberates with them. Don Beebe, a Bills wideout on the Super Bowl teams of the 1990s, has his own reasons for a passionate reaction to Houston. He can take you almost step-by-step through his first touchdown reception as a rookie in 1989, a 63-yard bomb in the Astrodome that quarterback Jim Kelly basically turned into a playground play:

Dishman came in tight. Beebe, now head coach at Aurora University, broke hard and simply flew. Kelly, who had been a record-breaking quarterback for the old Houston Gamblers of the United States Football League, dug in and threw.

“It was the first pass that ever went my way,” Beebe said of his NFL career, describing it as “a really high ball, like a punt, that I lost in the lights.” He managed to find it and keep going without tumbling over.

Touchdown. The Bills won, 47-41. That pass, in itself, felt like a message: That team had the nerve and skill for striking deep. The franchise was only a few years beyond consecutive 2-14 seasons, and every win was a statement of trajectory.

In that sense, there is a compelling parallel between those Bills and these ones.

Where there is not yet a parallel, Beebe said, is in the level of mystic chemistry that happened next. He was there for all four Buffalo Super Bowls, and he was a principal in the impossible playoff comeback from a 35-3 hole against Houston, in 1993. 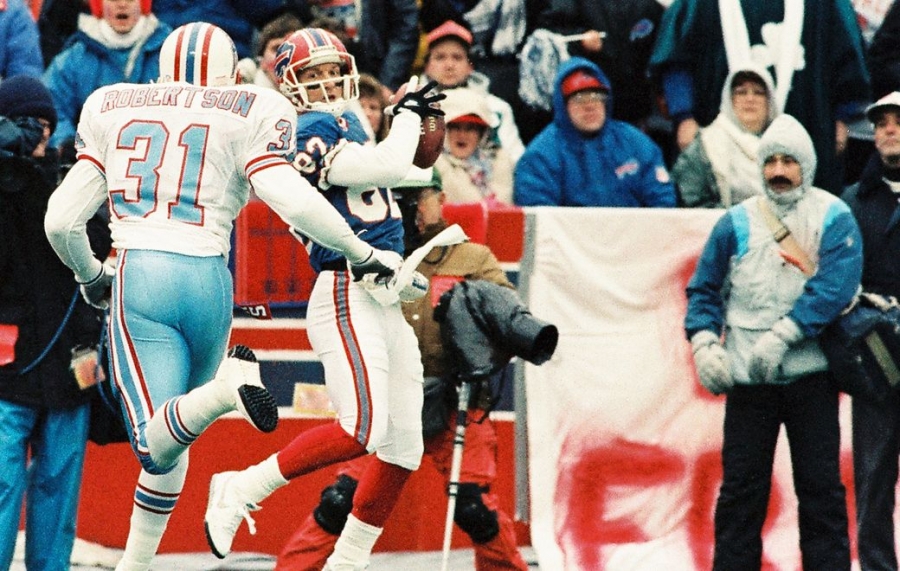 When he sees players from that Oilers team who are now old friends, they still – half-joking and half-grieving – always remind him he stepped out of bounds and no call was made when Frank Reich hit him on a critical 38-yard touchdown route.

To Beebe, who carries those comeback memories like treasure, it all spins off an almost indefinable romance between a city and its team.

“What was so special was the camaraderie and brotherhood,” he said, “how everyone – every janitor and security guard and maintenance guy and receptionist – was totally involved, the way every Tom, Dick and Harry just loved the Bills.”

Beebe has a son, Chad, who signed with Minnesota, a franchise whose devoted followers have also endured four Super Bowls defeats, yet Beebe is willing to say point-blank:

“Buffalo is the most hungry city in America, by far.”

All of that pours like lava into Houston today. What is at stake – what separates this game from the miracle playoff appearance of two years ago – is the hope that this team is on the cusp of renewing the feeling of those years when Bills flags rippled from wooden duplexes amid cold January winds, when the Yuletide rolled into playoff runs that felt like extended holidays.

Borjon, with her kids, will be in Houston to watch as the team steps toward that crossroads. 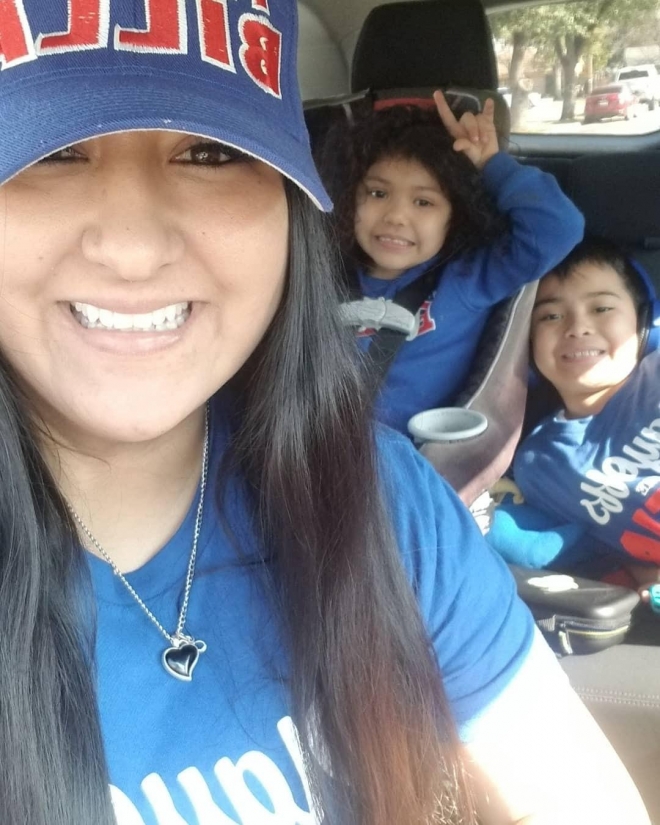 On the road to Houston: Veronica Borjon with Gino, 7, and Lourdes, 4, her children with Ezra Castro, or "Pancho Billa." (Family photo)

“I promised Ezra, if the Bills made the playoffs, I’d bring Gino,” she said, speaking of her 7-year-old son, and she believes 4-year-old Lourdes is now old enough to enjoy the game, as well.

She also arrives as a means of gentle healing. Houston is where Castro was hospitalized last year in the hardest weeks of his illness, with the Astrodome and NRG Stadium on the horizon. She wills herself to focus less on his hard days and more on all the gifts for which she feels such gratitude.

Everyday fans of both the Bills and Texans visited Castro, a kindred spirit, in the MD Anderson Cancer Center. Ed Oliver – the first round draft pick from Houston who quickly made an impact with the Bills – came up to see him. So did Joe Webb, a former Buffalo quarterback then on Houston's active roster and hero of the Bills “Snowvertime” victory of 2017.

Borjon thinks of Katie O’Brien, the Bills fan, neuropsychologist and cancer survivor who supported the family during those long weeks, and how O’Brien’s friend, Stuart Renfro, allowed Borjon to crash at his apartment. She thinks of the overwhelming and continuing waves of support from #BillsMafia members, around the nation.

And she thinks of Harrison Phillips, which explains why a gesture she plans for this weekend will say as much about what she values as the game itself.

Almost two years ago, in another Texas surprise when the NFL draft was held in Arlington, Castro – fully masked and in Pancho Billa gear – was invited to the stage to make a third-draft pick for the Bills, after the team had already taken Josh Allen and Tremaine Edmunds. Stunned, Castro called the name of Phillips, a defensive tackle, shouted “Yeah, baby! Viva Los Bills!” and found himself in a national spotlight.

He and Phillips became good friends. They routinely texted back and forth throughout Castro’s treatment. Over Christmas, Phillips sent presents to the kids, who call him "Uncle Harry." 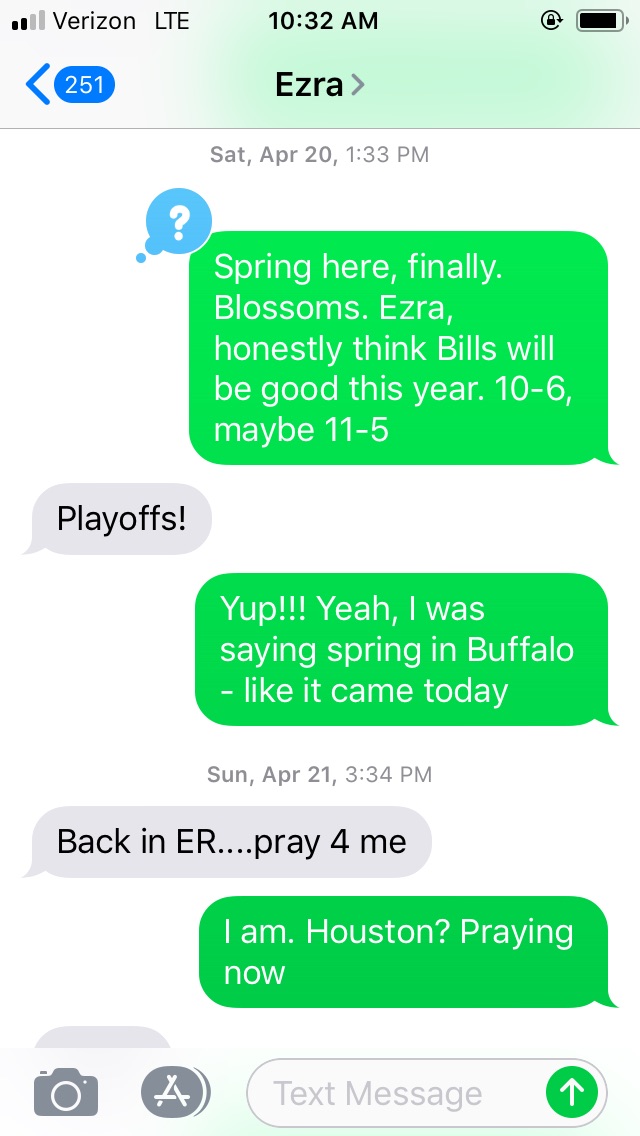 Not long ago, at a tailor’s shop in Dallas, the family discovered that Castro – months before his death – had brought over a Bills jersey with the number “99” that he wanted emblazoned with Phillips’ name, for little Gino.

Borjon is coming to Houston, in part, because she believes in fate. “Ezra helped to make this happen,” she said about the playoffs, knowing how thrilled he would have been to see so much come together for Buffalo. But she also plans a quick family meeting with Phillips, sidelined with an injury, and she offers few hints as to what it is about.

She told him only that she is bringing a gift that goes to the soul of everything she appreciates in Houston, to the bond she sees as mortar at the core of this whole game.

It will be another Texas surprise, raised from the echoes. With the Bills themselves, she hopes Ezra's team might bring home just one more.