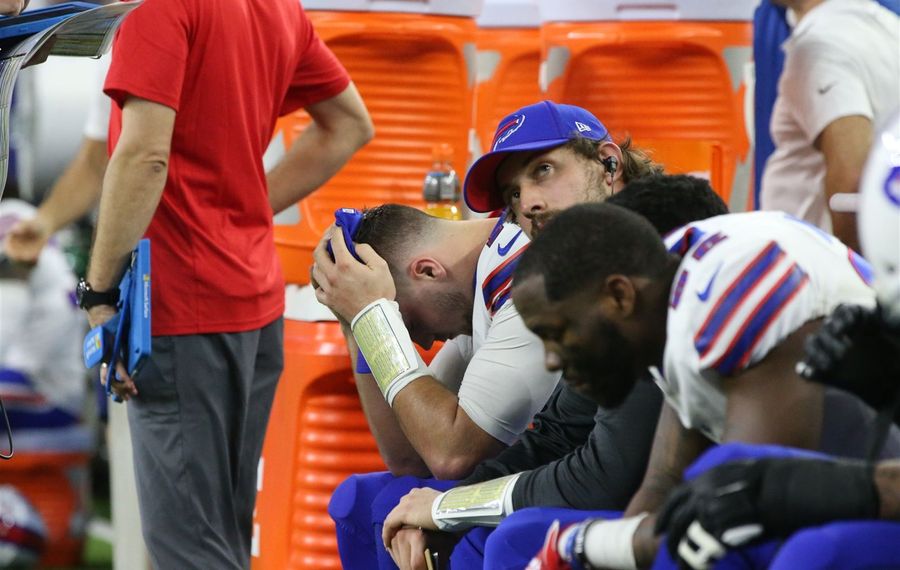 Buffalo Bills coach Sean McDermott told his players that he loved them after a playoff loss to the Houston Texans ended their season, much as he has told them throughout the season.

“There’s nothing I can say that will take away the pain,” McDermott said. “We’ve worked really hard all offseason and during the season. Guys gave it everything they had.

That was evident as the Bills were seemingly out of the game after turning the ball over on downs in the final minutes, but the defense held and the offense was in position for Stephen Hauschka's game-tying field goal.

"We talked about punting and using timeouts, but we wanted to be aggressive," McDermott said. "It  ended up working out with going down and tying the game and going to overtime."

Allen took an intentional grounding penalty and then was sacked on fourth down, giving the Texans the ball.

"I've got to know the situation and be smarter in that aspect," Allen said. "I was trying to make a play for the team, and do whatever it took. There are some plays I’d take back and some plays I wouldn’t … "

The Bills’ defense, which had allowed 19 unanswered points, answered by holding the Texans without a first down. Star Lotulelei and the Bills’ defensive front stopped Deshaun Watson on a keeper, giving the Bills the ball at midfield with 1:16 remaining.

Buffalo got a first down with 34 seconds remaining on a 10-yard pass to Cole Beasley. After three incompletions, Hauschka tied the game at 19 with a 47-yard field goal with five seconds remaining.

The Texans scored on their second possession of overtime.

"Every loss is personal," Allen said. "Hindsight is 20/20. There are some things we should have hit it and I’ll put that on my shoulders. … Teams go as their quarterbacks go. … It’s a bitter taste. You don’t want to lose that way. You don’t want to lose anyway. Hats off to the Texans. I'm going to take this into the offseason and use it as fuel."

On Allen's play in general, McDermott said, "He was trying to do too much and getting a little bit extreme with what he felt he needed at the time, the one lateral or whatever it was. ... But overall, we didn’t make a lot of plays."