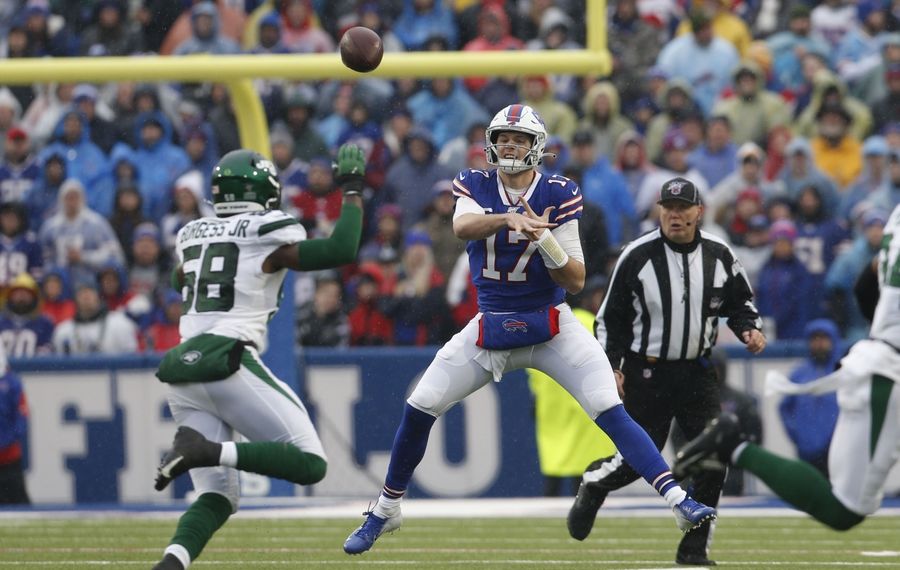 There was money to be made this NFL season if you were willing to bet the under in Buffalo Bills games.

Twelve times in 16 games, the Bills and opponents were under the number, a tribute to the defensive prowess of this Buffalo team and a product of its sputtering offense. In eight of their 10 victories, the Bills held the opposition under 20 points. The two exceptions were the Miami games, and they were the Bills' two highest scoring outputs of the season. In two "over" games, the opponent did most of the scoring, 31 by the Philadelphia Eagles and 24 by the New England Patriots.

The handicappers caught on to the Bills in the second half of their season, setting the over/under number in the 30s for five of last eight games. If our research is correct, Bills games twice hit the NFL season low, 36.5 points in two of the final three weeks of the regular season. Saturday, you expect a wild offensive show by Bills' standards if the handicappers have judged the Buffalo at Houston wild-card game correctly. The over/under line is 43, fourth highest this season for a Bills game.

Much is made of home field and the benefit of the bye week in the NFL postseason. Home-field advantage seems overrated. Since the present NFL postseason format began in 2002, home teams are just 36-32 in the wild-card round. Only twice in 17 seasons (2006, 2011), did the home teams score 4-0 wild-card sweeps and once (2015) the visiting teams swept the four games.

Six of the last 17 Super Bowl teams went through the wild-card round. Super Bowl winners Pittsburgh (2002), New York Giants (2007) and Green Bay (2010) started the playoffs as wild-card entries on the road. Only seven No. 1 seeds have won the Lombardi Trophy.

The scoop: The Bills won their first three wild-card games, including the 41-38 overtime victory over the Houston Oilers in the 1992 season, the greatest postseason comeback in NFL history. However, they have lost the last four, including the Music City Miracle to the Tennessee Titans in 1999. ... The Bills finished second in the NFL in total defense (298.3 yards) and points allowed (16.2) and were a plus-four in turnovers, led by six interceptions by Pro Bowl cornerback Tre'Davious White, who will be challenged by Houston's DeAndre Hopkins, who had 104 receptions and is one of the NFL's toughest and most determined pass catchers. ... Buffalo's offense has been inconsistent all season, probably due to the inconsistency of second-year quarterback Josh Allen. When the Bills get a spark, it's usually by Allen passes to John Brown and Cole Beasley, but there is no constant deep threat. ... Houston QB Deshaun Watson passed for 26 touchdowns and ran for seven in the regular season. With Watson's athletic ability and the work of Carlos Hyde and Duke Johnson, Houston has a rushing attack that averages a healthy 4.6 yards per attempt. ... A lot of attention will be devoted to the return of Texans defensive end J.J. Watt, a two-time NFL Defensive Player of the Year. Watt has not played since he tore a pectoral muscle and underwent surgery after the Week 8 game against Oakland. He had five sacks in eight games. Whitney Mercilus on the other end has 7.5 sacks.

Outlook: The Bills have the advantage defensively, that is offset by the Texans' offensive threats, the receiving of Hopkins, tight end Darren Fells, who was a basketball player at UC Irvine which does not have football, and the elusiveness of Watson. Texans, 20-10.

The scoop: In a matter of weeks, the Patriots have become perhaps the most disrespected 12-4 team in NFL history. Critics say Tom Brady looks old, the offense is dead and time and tide have finally caught up to the New England dynasty. Overlooked is the fact that New England's defense ranks No. 1 in the NFL, allowing 275.9 yards per game, lowest for the Patriots since the 1977 and only 13.9 points per game. The Patriots have shortcomings, but coach Bill Belichick has been overcoming talent gaps his entire career. ... Many believe the Patriots are susceptible to a power running game and the Titans have NFL rushing leader Derrick Henry (1,540 yards). New England allowed only 95.5 yards per game on the ground. How many problems will New England schemes cause for Titans quarterback Ryan Tannehill, whom the Pats know well from his years with Miami? Tannehill had a career year with 22 TD passes, 6 INTS and 117.5 passer rating after taking over for Marcus Mariota after a Week 5 loss to the Bills. The Titans' defense ranks in the bottom half of the league and allows 4.8 yards per rushing attempt, but they are a physical unit. Ball-hawking safety Kevin Byard has 17 interceptions since 2017, and linebacker Harold Landry leads team with nine sacks.

Outlook: Nobody has coached and won more postseason games than Bill Belichick. Mike Vrabel, a former Patriot, learned his lessons well with New England, but this is his first postseason game as a head coach. New England doesn't look ready to crumble against anybody but the Ravens or Chiefs. Patriots, 17-13.