HOUSTON – Melanie Stewart helped to set up the lines of tables in Pierce Street. She is a manager at Christian's Tailgate Bar & Grill, a home away from home to Buffalo Bills fans in Houston, and she fully expected the street to be packed with celebrants after Saturday's playoff showdown with the Texans.

Instead, a solemn guy in a Josh Allen jersey, Steve Kammermayer of Toronto, sat there alone.

"It's sad," said Stewart, who wore a Bills cap as she surveyed the scene. "It was just so exciting to feel all the energy around here, and now look at everybody."

[Vic Carucci: Bills find the 'billsiest' way to lose in overtime to Texans]

She said working in close proximity to the Buffalo faithful for so long was enough to make her understand their love for the team. The place was completely packed during the game, following a giant party Friday night in which Bills fans crowded the street and basically took over the neighborhood.

Saturday, Stewart gestured at a group of silent fans in Bills gear, walking shoulder to shoulder toward the door of Christian's.

"They're coming back," she said, "but they just look so upset."

The Bills lost a seesaw game Saturday to Houston, 22-19. They opened up a 16-0 lead, fell behind 19-16, tied it up to force overtime and were finally defeated by a field goal. 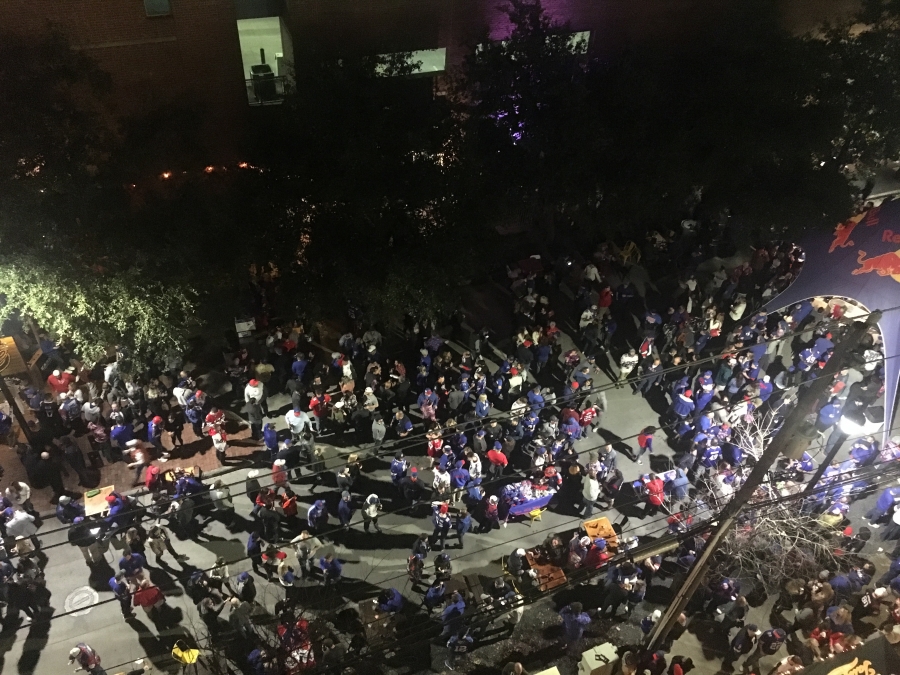 Kammermayer, a stock analyst, was joined outside the bar by Matt McGloin, an entertainment journalist from Lancaster. The hardest part, they agreed, was watching Buffalo lose a game in which it seemed to have such complete control.

"We should have had it," Kammermayer said. He and McGloin questioned the play-calling, maintaining the Bills were too quick to settle for field goals when they had silenced Texans fans and had a chance – after a fast start – to knock Houston out of the game.

Both men said next season's schedule will be tougher, and the game raises questions about poise and decision-making that the Bills must address if they want this year's progress to carry over.

Will and Krissy Corman, of Philadelphia, said they became fans while living in an Eagles hotbed because Will's father, a Rochester native, passed down his deep allegiance to the Bills. They predicted the defeat will only be a step in the continued improvement of the franchise.

"Josh Allen is the real deal," Will Corman said, contending Allen will learn from his second half struggles. "I'm disappointed, yes, but the future will be great. They're going to win the division next year."

As for Kammermayer and McGloin, they said the greatest part of the weekend – as it often is for Bills loyalists – was the instant sense of kinship. They both traveled to the game alone, and their friendship was cemented among more than 100 people with solitary tickets who – through the Houston Bills Backers Facebook page – came together in a spontaneous and joyous tailgate.

"It's community," said McGloin, noting how that bonding factor is the one quality, no matter what, that seems to carry over.

A haunting last line for a Bills season of high hopes