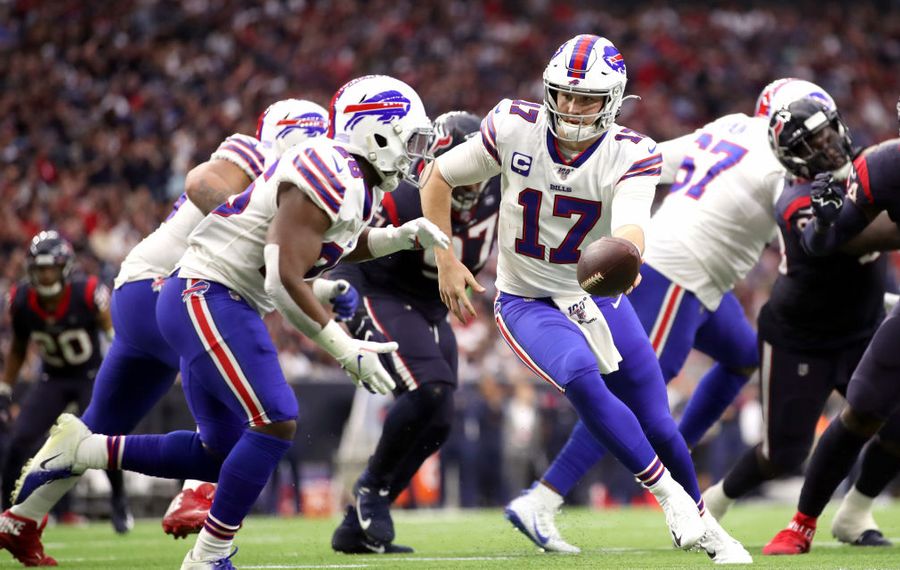 Here's my summary of the Buffalo Bills-Houston Texans game, quarter by quarter.

Key gain: On the fourth play from scrimmage, Allen ran 42 yards on a designed quarterback sweep to the Houston 20. It was his longest run of the season and second longest of his career.

Texans lineup: Houston was without its fastest receiver, Will Fuller, who runs a 4.32-second 40-yard dash and caught an NFL-best nine passes of 30-plus yards this year. Also missing was No. 2 tight end Jordan Akins, who caught 36 passes and played 65% of the snaps.

Zebra watch: The Texans challenged a third-down incompletion with 7:09 left, arguing Taron Johnson had his arm around DeAndre Hopkins on a crossing route. Video review ruled no foul.

Theme: Bills defense brings the heat. The Bills had four sacks in the first half, two by Jerry Hughes and two by Trent Murphy.

Domination: The Bills outgained the Texans, 247-81.

Duuuuuuke: That was the loud chant that rung through NRG Stadium when Bills receiver Duke Williams caught two third-down passes for first downs. The latter, a 15-yarder, kept a field goal drive going at the end of the half.

Zebra report: Video review saved the Bills points with 11:55 left when a fumble by Allen was correctly overturned. His knee was down just before Bradley Roby punched it out. The Bills kept possession at the Houston 22 and produced a 40-yard Stephen Hauschka field goal.

Boos: The Texans were booed off the field at halftime. Houston has been shut out in the first half at home, three times in the last five postseasons. That’s as many as the rest of the NFL combined. All three instances have come in the wild-card round.

Second guess: Not sure why the Bills handed off to Frank Gore from a power formation on first down from the Texans 23 with 30 seconds left. It gained 1 yard.

Great athleticism: Watson showed his playmaking ability by running 20 yards on a quarterback sweep late in the third quarter for a touchdown. Fullback Cullen Gillaspia led the play. Then Watson used his speed to beat the Bills’ defenders to the right pylon for a two-point conversion.

Prime target: Tre’Davious White followed receiver DeAndre Hopkins on the first series of the game. But for most of the first half, the Bills played zone coverage and did not match up White when Hopkins was in the slot. In the third quarter, White shadowed Hopkins and forced a fumble by the receiver that Tremaine Edmunds recovered.

Agent 99: J.J. Watt saw limited snaps but beat Cody Ford for a sack on a third-and-8 play at the Texans’ 12. Ford got a bad jump off the snap, probably due to crowd noise.

Zebra report: The opening kickoff was eventful. Officials initially ruled the Bills’ Jaquan Johnson recovered a fumble in the end zone after return man DeAndre Carter tossed the ball to the official. After a huddle, the officials correctly ruled Carter had “given himself up” and it was a touchback.

Theme: The Bills let it slip away, blowing a 16-0 third-quarter lead.

Play of the game: Deshaun Watson slipped out of the arms of two Bills blitzers to pull a completion out of the jaws of a near-certain sack. The Texans’ QB escaped the pocket to the right side and threw to Taiwan Jones, who completed a 34-yard catch and run to the Buffalo 10.

Momentum shift: With the Bills leading, 16-8, Allen fumbled at midfield with 14:11 left in the game on a scramble up the middle. It set up the Texans for a short-field field goal.

Long pass: A 41-yard completion from Watson to Hopkins was the key play that led to the Texans’ go-ahead TD in the fourth quarter. The Texans beat a blitz on the play.

Under 20 again: The Texans are 35-2 under Bill O’Brien when holding foes to fewer than 20 points, which ranks second in the NFL only to New England (53-3). The Bills had their chances to get to 20 points but couldn’t finish drives.

Still waiting: The Bills now have gone 24 years without a playoff victory, since the 1995 season.