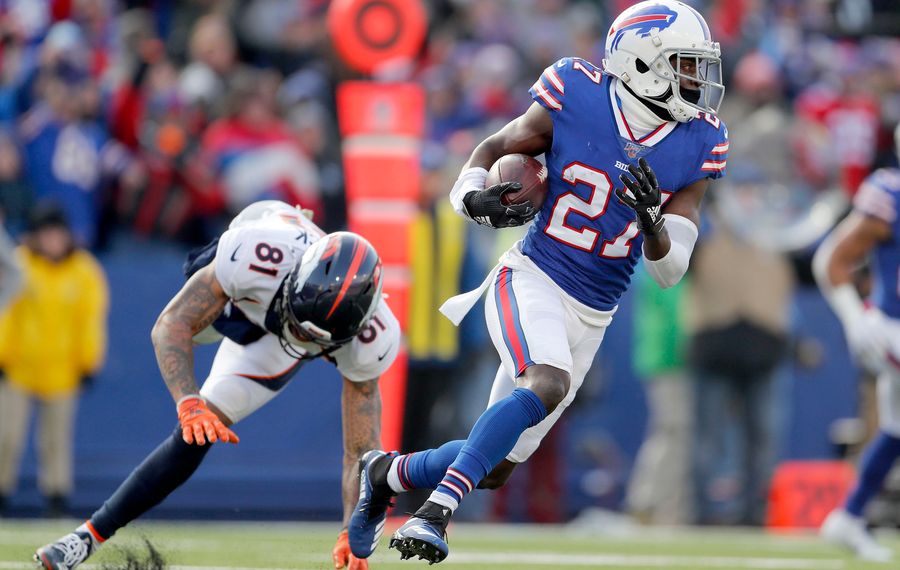 Cornerback Tre’Davious White was named a first-team All-Pro, becoming the first Bills player to do so since defensive tackle Marcell Dareus and defensive end Mario Williams were on the team in 2014.

White, in his third season, was selected to the first team along with the New England Patriots' Stephon Gilmore. Gilmore, a former first-round draft pick of the Bills, was a unanimous choice, appearing on all 50 ballots from a national panel of media members who cover the NFL. White was on 38 ballots.

According to analytics website Pro Football Focus, White is the only cornerback since 2006 to have played 500-plus coverage snaps and not allow a touchdown while leading the NFL in interceptions. Gilmore allowed one touchdown, to the Bills' John Brown, in Week 16.

White also was voted to his first Pro Bowl this season.

That leads us to this week’s Bills Mailbag …

x-Mark Martin asks: 1. Can you put your GM hat on and give an early opinion on which free agents you pay in 2020 and what it costs to keep them? 2. Including the 2020 salary cap increase, what percentage of the total cap space available do you put to each of these categories: re-signing free agents, adding external free agents, drafted rookies, and amount you keep in reserve?

X-Paul #BillsMafia asks: Will most of the cap space be taken up this offseason by trying to re-sign Tre’Davious White, Jordan Phillips, Shaq Lawson, etc.?

Of that group, the biggest contributors are Phillips, Lawson, Spain, Johnson and Gore. Because of their age and production, Phillips and Lawson can expect to land the biggest deals. General Manager Brandon Beane can easily afford to pay both if he chooses. Spain, who signed a one-year deal, played basically every snap for the offense and did not allow a sack. He put himself in a good position. Johnson gave the team much-needed depth at outside cornerback, while Gore was a valuable mentor to rookie running back Devin Singletary.

Beane has talked about how he wants to draft well and re-sign his own. While Phillips was an addition off waivers and Lawson was picked by the previous regime, it’s safe to say the locker room will be watching to see if he follows through on taking care of the players who performed well. After the season, we’ll take a much closer look at the team’s free agents, and what might happen with each.

As for Mark’s second question, last year the Bills cleaned up their cap situation, which allowed them to be aggressive in free agency. The team committed about $60 million on the 2019 salary cap to free agents from other teams. I would not expect that number to be that high in the upcoming offseason, because the team does not have as many needs.

If I were Beane, the bulk of my money would go to re-signing my own free agents (even though Matt Milano still has one year left, I’d prioritize him first), then adding external free agents, then money kept in reserve for future classes of free agents, then drafted rookies.

For what it’s worth, White is under team control for two more seasons, assuming the Bills pick up the fifth-year option on his rookie contract, which seems like a no-brainer. It doesn't happen often for players with two years left on their contracts, but it might even be worth looking at offering him an extension now. The cost for a first-team All-Pro cornerback is only going to go up, so the Bills might be able to sign White to a deal now that looks pretty team-friendly in a few years.

Kramer asks: Do you know 35 different quarterbacks have passed for more than 300 yards in a game this year? Last year it was 33 quarterbacks. Who’s that on – Josh Allen or Brian Daboll?

Jay: This season, there were 132 instances of a quarterback throwing for 300 or more yards in game. As you all know, none of those came from Josh Allen. My response to that is – does it really matter? The Bills went 10-6. They clinched a playoff spot with two weeks left in the regular season. They have a very good chance to win their first playoff game since 1995. Wins and losses aren’t measured by how many 300-yard passing games a team’s quarterback has. If that was the goal, Daboll would just call more passes until Allen got there. I’d rather see the team do what is necessary to win rather than worry about a number that ultimately may have little to do with the outcome.

Michael Hayes asks: Josh Allen has great tangible and intangible qualities. He’s made impressive progress in many categories this year, including completion percentage. It seems that each game he makes throws that only one or two other quarterbacks can make. The problem is, he misses a half dozen throws that the other 31 make. I think you can win games in the regular season under this model, but the playoffs are a stretch. Those games are too tight. Missed, basic throws result in too many plays and points left on the field and too many drives stalled. Tell me the Bills wouldn’t have won 12 or 13 games and contended for the Super Bowl if he could perform the basics. He’s made progress this year, but can this be fixed?

Jay: This, to me, is the more important question about Allen. Simply put, the offense left too many points on the field because Allen missed throws deep down the field that were open. He would be the first to tell you that. I hate to give you a non-answer, but the truth is I don’t know. I’m optimistic since Allen was able to improve his short and intermediate accuracy from year one to year two, but until he demonstrates that he can do the same with the deep ball, it’s impossible to say yes or no with 100% certainty. Allen appears to have the work ethic and desire to be great. We’ll see if he can get there.

Ontario Hardaway asks: Here’s a question for your mailbag – where did those jerseys go before jersey swaps? For sale somewhere? Donated to charity to auction off?

Jay: This question is in response to the story I wrote last week about players exchanging jerseys after the game, which was fun to write. Game-worn jerseys are auctioned off frequently at nflauction.nfl.com, with proceeds benefiting a number of charitable causes. After that, I’m sure players kept jerseys that were significant to them, while teams did the same. Some game-worn jerseys make it to the Pro Football Hall of Fame. I’m sure plenty of others simply got lost through the years, too.

Edwin Goetz asks: What are your thoughts on Matt Barkley’s performance Sunday? Did he hurt his chances of coming back next season? I wasn’t impressed. In addition, with the play of Tommy Sweeney and Dawson Knox, is Tyler Kroft expendable?

Jay: I agree that Barkley struggled against the Jets. The weather wasn’t great and he had backups playing around him, but those sound like excuses after Barkley went 18 of 35 for 232 yards and two interceptions, a quarterback rating of 48.8. Barkley is under contract for 2020 and one poor showing against the Jets doesn’t mean I think that should or will change. It was probably not easy to get up for a meaningless game, although it would have been nice to see him perform better. Obviously, the Bills need him if something happens to Allen. As for Kroft, he’s absolutely expendable. Knox has established himself as the starter and I think the Bills could get the same thing from Sweeney as they would from Kroft, who is scheduled to count more than $6 million against the salary cap next season. That’s way too much for a backup tight end.

Robert Chapman asks: If an NFL team roster totals 53 players, why are they not all allowed to dress and be active on game day? If the owner is paying them, I would think they would want them available to play in the event of injuries. Do we have a third quarterback on the team? Who would serve in that role?

Jay: I’m with you, Robert. The reason teams are only allowed to have 46 active players is because of injuries. In almost every game, a team will have a player or players who are unable to play because they are hurt. By having seven inactive players on both sides, the playing field is “leveled” to a degree. It’s possible, of course, that a team has more than seven injured players, but the point remains. So what’s the answer?

The league could just say that teams can have their entire 53-man roster active, although that would create the imbalance mentioned above. One potential workaround could be to allow teams to call players up from their 10-man practice squad on a per-game basis, ensuring both sides have 53 active, healthy players. There would be issues in regards to the salary cap that would have to be worked out, but that seems like a worthwhile discussion.

Joseph Marks asks: With Tom Brady near the end of his career, do you think the Patriots will use their first pick in the draft to go after the best quarterback available?

Jay: Predicting what Bill Belichick will do in the draft is next to impossible. The Patriots’ backup this season is rookie Jarrett Stidham, who received a lot of praise for his play in the preseason. If Brady does indeed move on, it’s possible Stidham gets the first chance at replacing him. Thanks for all the questions this week!