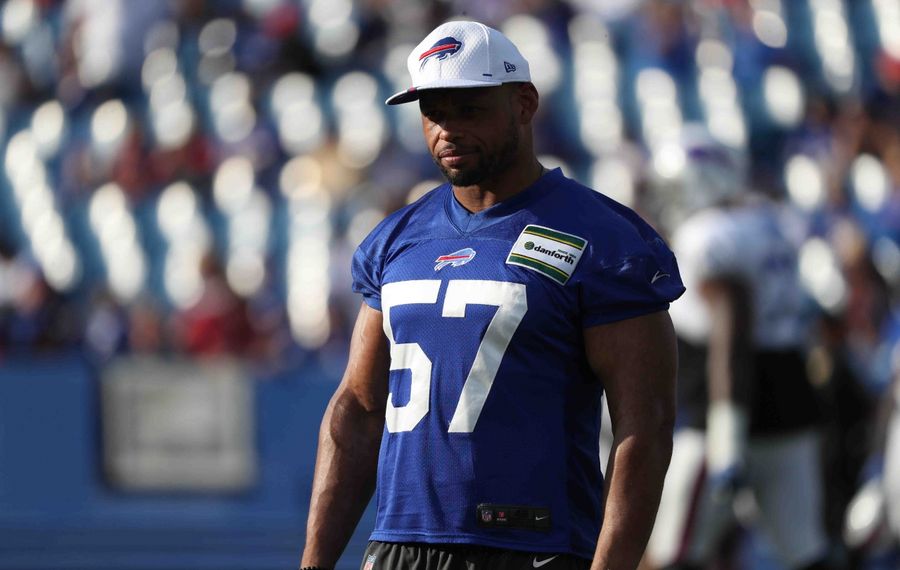 "I'm done," the Buffalo Bills' linebacker said in the visitors' locker room at NRG Stadium following a 22-19 loss to the Houston Texans in an AFC wild-card playoff game. "I made the decision a while ago, and so I'm at peace with it. It's more about choosing my family than not choosing football. ... It's been a great ride. I have no regrets. I've loved every minute of it."

Alexander had said he intended to make this his final season when he re-signed with the Bills on a one-year contract, but he had said it would be disrespectful to his teammates to discuss his plans until the season was over.

[RELATED: If this was Lorenzo Alexander's last home game, Bills send him out in style]

Alexander made two tackles in the final game of his NFL career. He said afterward the painful nature of the Bills' loss would not sway him.

"I'm 100% sure," he said of his decision to hang up his cleats. "I'm not going to allow a game like this to factor into a decision that I made with my wife a while ago. Like I said, it's about my family. I'm a man that holds my family in high regard. They've been with me the last 11 years of my career. It's time. ... Be a father, be a husband full time and be able to do it at a high level, because I am 36. This game is brutal, and the more I play, the more debilitating it will be on my body the older I get."

Alexander said he decided in the middle of the season that he knew he would walk away whenever the Bills' season ended. He took satisfaction in being part of turning around the direction of the franchise. After ending a 17-year playoff drought in 2017, the Bills have now made the playoffs twice in three seasons.

"It's been great, to be a part of something special. I think we have started to set this organization on a track to where it can be a perennial playoff team and a contender every single year. There are a lot of great young men and women in that building. Hopefully I've impacted their lives in a positive way."

Alexander's retirement will leave a hole in the Bills' starting lineup defensively, but the bigger loss might be in the locker room. He's perhaps the most respected leader on the team. It's now two straight years that the Bills have seen a premier leader retire, with Alexander following Kyle Williams after the 2018 season.

"I'll still be around," Alexander said. "I'm part of this community in Buffalo, so hopefully I can do something like Kyle Williams is doing, Eric Wood, still engaged and coming around and still being a Buffalo Bill."

Bills fans are special to him and his family, he said.

“I appreciate everybody out there. I obviously made a lot of great friends and really people that I would call family. And I just want to say thank you for all the support on and really off the field, through my foundation, the community work, people volunteering.

“Bills Mafia has been special because it’s been more than just a fan base, but really a community where you can intimately get to know people. People know my kids, help them out and do different things, so it’s really been cool to be a part of the Buffalo Bills community. So again, thank you.”