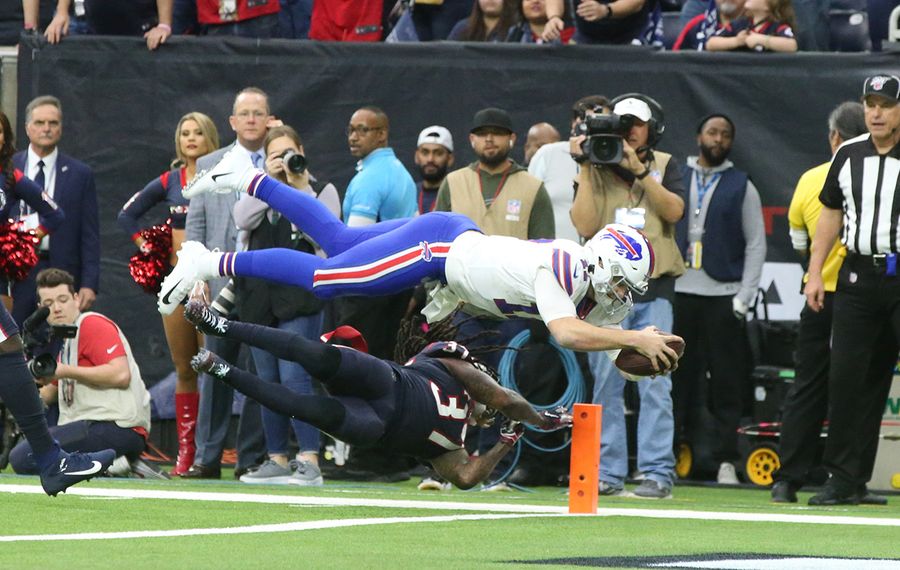 HOUSTON – It took a while for the expected showdown between Tre’Davious White and DeAndre Hopkins to heat up.

When it did, the Buffalo Bills’ All-Pro cornerback got the early advantage. Eventually, though, the Texans’ All-Pro receiver – and his quarterback – got the last laugh.

Hopkins beat White for a 41-yard completion in the fourth quarter Saturday, setting up the Texans for a go-ahead touchdown in what ended up as a 22-19 overtime win over the Bills at NRG Stadium. The Bills blew a 16-point, second-half lead in being denied their first postseason victory since 1995.

“It's going to haunt us for sure in the offseason, but we'll be back,” White said. “It's just going to make us stronger going forward.”

The Bills’ defense could do no wrong in the first half, starting with the job it did against Hopkins. Lining up mostly in the slot, Hopkins was targeted twice, but did not make a catch. White didn’t follow Hopkins into the slot, which he called in the week leading up to the game.

“I don’t think it’s gonna be a one-on-one matchup because there are 11 guys on the field,” he said. “Whenever he comes to the left side, I gotta be on my best game. … It’s gonna take all 11 of us to try to limit him. We know (Hopkins is) one of the best in the league.”

While White wasn’t in the mood to get into a war of words with Hopkins, the Texans’ receiver didn’t mind doing so in an interview with NFL Network that aired before the game.

Hopkins told Hall of Fame receiver Michael Irvin that White hasn’t “earned my respect yet” because he hasn’t played him one-on-one.

"He's a good defender," Hopkins said of White. "Ignorance is bliss. He doesn't know that he plays in a zone defense, I think. … Not like (Darrelle) Revis and those guys played you back in the day on that island when you see a safety all the way on the hash on the other side. I give respect to the guys who can come out there on the island and look me in the face and not play outside because they have safety help."

In the third quarter, Hopkins finally made his first catch. White promptly knocked the ball away, with linebacker Tremaine Edmunds making the recovery for the Bills’ defense.

“We’ve been in situations like that before. We knew we were playing against a good team today," Hopkins said after the game. "We knew we came out in the second half and do what we had to do and execute on some things that we didn’t execute on in the first half. We knew we were going to have a shot to come out and win this game and that’s what we did.”

Hopkins, though, bounced back to make a couple of catches against White on Houston’s touchdown drive that cut the Bills’ lead to 16-8.

After that came the bomb from quarterback Deshaun Watson with just under 9 minutes to play. That got the Texans to the Bills’ 28-yard line. Six plays later, Watson found Carlos Hyde for a 5-yard touchdown reception to give the Texans the lead.

“It's football. People adjust,” White said. “They were able to put their players in position to make plays. A couple plays got away from us and they capitalized. They were running the plays that we watched on film. They just did a good job executing.”

That included when Hopkins, who finished with six catches for 90 yards, got open against White’s coverage for a crucial two-point conversion following Hyde’s touchdown. That gave the Texans a three-point lead, which meant the Bills’ 47-yard field goal at the end of regulation only tied the score.

“It's tough, man, just to know how hard we work and just how together this group is,” White said. “It's one that is very bitter, but it's only going to make us better, for sure. We just look forward to next year.”

2. The Bills wasted an amazing start. Quarterback Josh Allen dazzled on the Bills’ opening drive, completing a pair of passes for 11 yards, taking a designed quarterback run for 42 yards and capping things with a 16-yard touchdown reception – yes, you read that right – on a trick play thrown by John Brown.

Allen, whose last receiving touchdown came in 2016 in college at Wyoming, became the first Bills’ quarterback to catch a touchdown pass in the postseason. He also became just the third player since 1975 to have at least one 25-yard pass, one 40-yard rush and one 15-yard reception in a single game, joining Hall of Fame running backs Marcus Allen (Week 2, 1982) and Walter Payton (Week 3, 1983).

Brown became the Bills’ first wide receiver to complete a pass in the postseason. During the regular season, Brown threw a touchdown pass to running back Devin Singletary against the Cowboys on Thanksgiving.

3. Duke Williams earned a promotion to the game-day roster. The Bills’ receiver had been a healthy inactive for eight straight games before the Week 17 game against the Jets. In that game, which was meaningless in the standings for the Bills, Williams made six catches for 108 yards.

That was enough for the coaching staff to make Williams active against the Jets. He took the place of Robert Foster, who was a healthy inactive.

Williams rewarded the Bills in the first half by making a pair of first-down catches, both of which came on third down. On the second of those, Williams appeared to suffer a lower-leg injury. Trainers taped Williams’ left foot and he was able to return to the game.

He nearly made a huge play late in the second quarter, but couldn’t pull in a pass from Allen in the end zone. Williams couldn't make another contested catch on the Bills' final drive. He finished with four catches for 49 yards on a team-high 10 targets.

4. A 47-yard field goal at the end of a playoff game ... what could go wrong? As it turns out, nothing. Stephen Hauschka drilled a field goal from that distance in the dying seconds of the fourth quarter, tying the game. That doesn't exactly exorcise the demons of that distance in Bills history, but it at least prevents a whole bunch of bad jokes.

5. The Bills almost scored one of the unlikeliest touchdowns in franchise history. At the start of the second half, Hauschka boomed a kickoff into the Houston end zone. Texans returner DeAndre Carter caught the ball, but never took a knee. Carter then flipped the ball to referee Tony Corrente, who had failed to blow the play dead. The ball was then picked up by Bills rookie safety Jaquan Johnson in the end zone and the play was ruled a Buffalo touchdown.

After a lengthy discussion among officials, however, it was ruled that Carter had given himself up for a touchback and the Texans got the ball at their 25-yard line.

6. Veteran right tackle Ty Nsekhe, who had to be carted off the field last week against the Jets because of an ankle injury, was able to play against the Texans. Rookie Cody Ford got the start and was in the game for the Bills’ first two possessions. Nsekhe came in for the next two as the two players continued the rotation that had been common in the first half of the season.

Ford and Nsekhe both took penalties in the first half – Ford for illegal hands to the face and Nsekhe for a false start.

Ford was beaten cleanly by Texans star J.J. Watt in the third quarter, leading to a sack of Allen on third down with the Bills in the red zone. Buffalo had to settle for a 38-yard field goal by Hauschka because of it. Ford was called for a 15-yard penalty in overtime, hurting what turned out to be the Bills' final offensive series of the season.

7. Allen once again showed poor ball security – a seasonlong problem. The Bills’ quarterback narrowly avoided a fumble that was recovered by Houston in the first half when his knee touched down an instant before the ball was poked out by Texans cornerback Bradley Roby. The play was initially ruled a fumble before being reversed after a video review.

Allen wasn’t so lucky in the fourth quarter, when Texans pass rusher Whitney Mercilus forced and recovered a fumble at midfield. The Texans were able to turn the good field position into a field goal.

8. Slot cornerback Taron Johnson was injured in the first half. Johnson went down to one knee before trainers came out to assist him. The Bills never announced the nature of Johnson’s injury, but when the third quarter started, Siran Neal was in Johnson’s usual position. Neal dropped what should have been an interception on the first play from scrimmage in the second half. Johnson’s injury left the Bills thin at cornerback. That’s because …

9. The team was also without starting cornerback Levi Wallace. He missed the game because of a sprained ankle suffered in Week 17 against the Jets. Without Wallace, former Texans first-round draft pick Kevin Johnson got the start for the Bills. The Bills’ other inactives were all healthy. The group included tight end Tommy Sweeney, running back T.J. Yeldon, guard Ike Boettger, offensive tackle Ryan Bates and defensive tackle Vincent Taylor.

10. The Texans had a pair of starters on their inactive list. Wide receiver Will Fuller V and cornerback Johnathan Joseph missed the game. Fuller has a groin injury, while Joseph was out because of a hamstring injury.

Fuller, who made 49 catches for 670 yards and three touchdowns in the regular season, is a key part of the Texans’ passing offense. In 11 games with him, Houston averaged 296.8 passing yards per game. In five games without him, that number dropped to 158.3 yards. Houston scored 26.3 points per game and went 8-3 with Fuller in the regular season. Without him, they averaged 19.6 points and went 2-3.

Additionally, the Texans’ No. 2 tight end, Jordan Akins, missed the game with a hamstring injury. Akins had 36 catches for 418 yards and two touchdowns during the regular season.