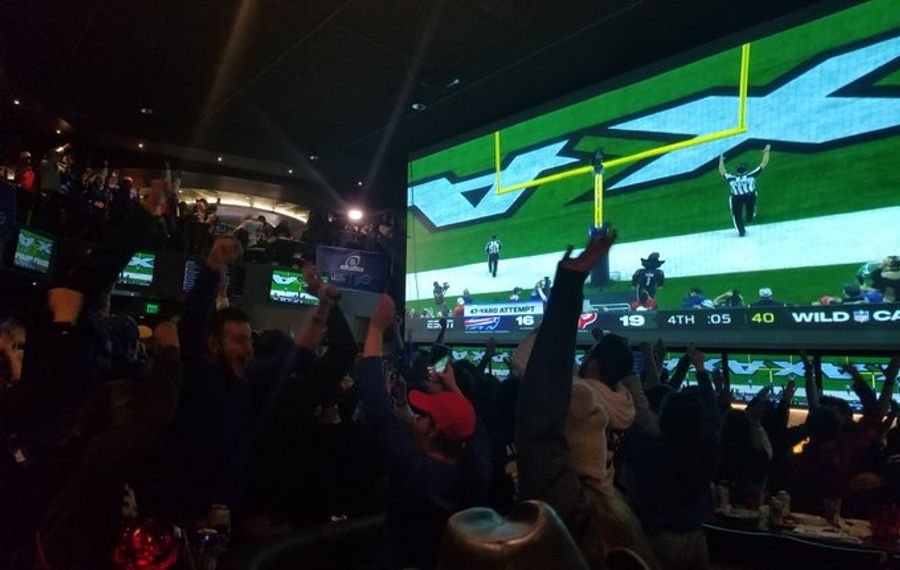 It was a happy evening for Buffalo Bills fans – until it wasn't.

When the Bills had a 16-0 lead over the Houston Texans during the third quarter of Buffalo's wild-card playoff game Saturday, the crowd packing (716) Food & Sport in downtown Buffalo was whooping and hollering with every first down and tackle shown on the 38-foot high-definition screen.

But by the end of the game, a subdued crowd filed out with their heads hanging, as the Bills' streak of 24 years without a playoff victory will last at least another year, following a 22-19 overtime loss.

Whether it was Cody Ford's personal foul that cost the Bills a chance at a game-winning overtime field goal, quarterback Josh Allen's maddening combination of brilliant plays followed closely by inept blunders, or Siran Neal and Matt Milano's failure to sack Houston quarterback DeShaun Watson on a pass play that led to the final kick in the Texans' win, fans will have a lot to chew on until training camp opens in July.

"Very, very disappointing," said Bob Stoczynski of Lancaster, a season ticket holder from 1962 to 2000, as the depressed crowd walked out of the sports bar.

"They gave it their best. A couple of bad plays one way or the other," Stoczynski said.

"I don't think it should be going to overtime. I think we really dropped the ball," Spencer Naab of Rochester said as the captains headed to midfield for the overtime coin toss.

But when the Bills were building their lead, the crowd was almost beside itself with joy. When John Brown threw a touchdown pass to Allen on the first possession, the intense wall of noise in (716) left ears ringing.

"The first half was amazing," Carrie Ryder of Buffalo said.

Jennifer Fleming of Caledonia, Ont., made a 90-minute drive to Buffalo to watch a game at (716) for the first time.

"It's so much fun and it's my birthday, so it's even better," Fleming said at halftime.

"Our defense actually showed up, the offense got into a rhythm and Josh Allen's got nerves of steel. Coldblooded," said Mike Kelly of Buffalo.

"Duke Williams really showed up, too," said Liz Taylor of Batavia, praising the receiver whose addition to the lineup has been a constant demand of the Bills Mafia for the past two months.

Although the Sabres started the big Buffalo sports day with a 3-2 win over the Florida Panthers, it seemed like a lot of people at the hockey game in KeyBank Center had something else on their minds – even Sabres alumni who returned for a '90s Day promotion.

Former Sabres captain Michael Peca pulled off his No. 27 Sabres jersey during the pregame ceremony and showed that he was merely using the old black-and-red Sabres garb to conceal his No. 27 Tre'Davious White Bills jersey.

Intermittently during the hockey game, the crowd would break into the Bills "Shout" song. After the game, many hockey fans walked a block to (716) for the football game.

"Nobody really parties like Buffalo fans," said Emma Lonergan, a Massachusetts resident who attends college in Geneva and came to Buffalo to watch the hockey game followed by the football game at (716) – even though she's a New England Patriots fan.

But at the end, it was all for naught.

However, some were able to look on the bright side.

"We got a future," Stoczynski said. "This quarterback is a young kid. Jim Kelly, it took him a couple years to get where he got the team to go. It's the kid's second year. Did I think we were going to win? Yes. Is it a disappointment? Yes. But there's next year."