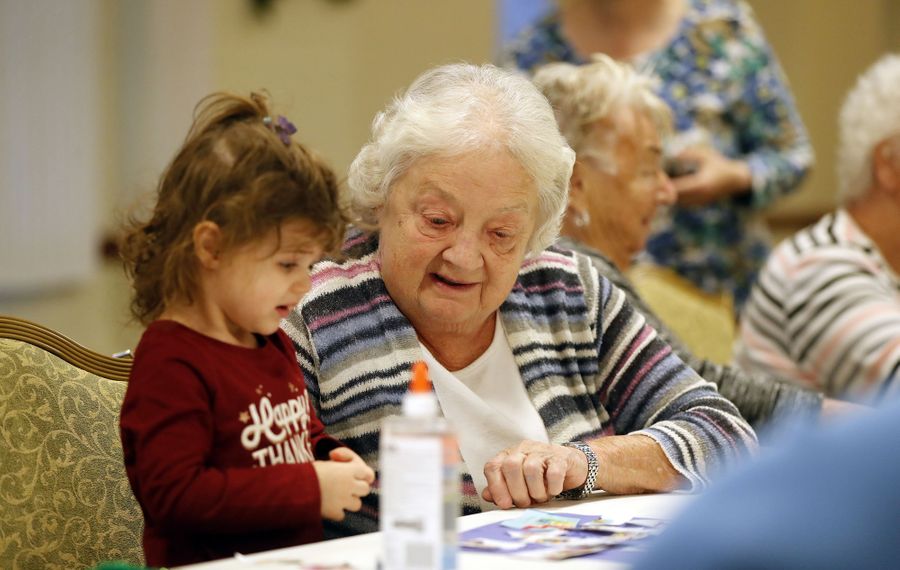 Regional Lutheran health care organizations followed a familiar path in elder care two decades ago when they joined forces, shuttered buildings across Buffalo, and set up a residential campus in the more pastoral suburb of Lancaster.

The new Niagara Lutheran Health System opened the GreenFields Continuing Care Community, which grew to include all stripes of senior housing, from independent living quarters to skilled nursing care.

In the years since, it looked a lot like thousands of elder living campuses across the country – until several weeks ago, when a child care center became part of the landscape.

Imagination Station Child Care & Preschool is part of a new 10,000-square-foot, $1.8 million building that also includes a wellness center for residents and staff.

The Lutheran Health System Board of Directors started studying the project 18 months ago as it looked for a novel way to attract and keep staff, add intergenerational programs for residents, and provide another child care option for the surrounding community.

“They saw it as a great benefit to the children just as much as we see it for our residents,” said Chris Koenig, GreenFields's president and CEO. “I think the buzz is starting to go around and others are taking a look at this.”

Instructors bring fitness to retirees who can't get to the Y

Care for the older population often becomes intensive, with its profit margins often thin, and many of its front-line workers laboring long hours with lower pay than their more educated co-workers.

That makes a child care center a conundrum for elder care providers who look to find and retain dependable workers.

“The problem is that there's an upfront cost, so when you're looking at operations, it adds costs but not revenue,” Koenig said. “Initially, it's difficult to comprehend until you start to analyze what you’re paying in overtime and recruitment costs.

“In terms of building the culture and keeping folks here,” he said, “I think the return is going to be huge on the quality of care.”

Operational revenues and donations from individuals and foundations buffeted the project expenses. They included a $100,000 grant from the Mother Cabrini Health Foundation, created in 2018 to focus on the health and well-being of New York State residents most vulnerable to poverty and joblessness. 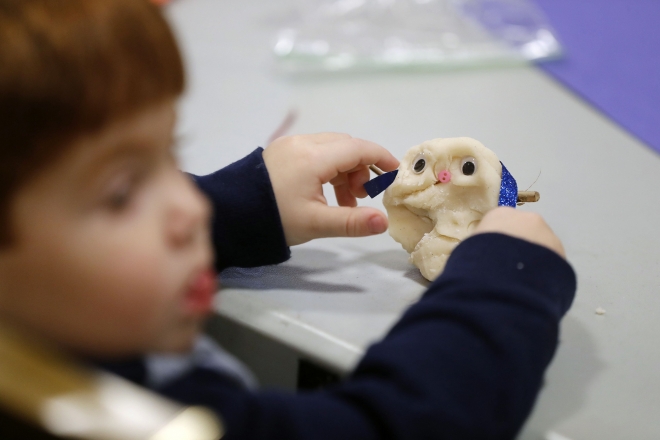 Logan Au works on a craft with residents at the GreenFields Continuing Care Community. Children enrolled in the Imagination Station Child Care and Preschool on the campus for seniors have had as many as two intergenerational programs each week since the childcare center opened in mid-November. (Mark Mulville/Buffalo News)

GreenFields has about 500 full- and part-time employees, including doctors, therapists, nurses, certified nursing assistants, nurses’ aides, housekeepers and laundry and maintenance staff. Roughly three-quarters of those workers are women.

“Almost all of our staff is at an age where either they're caring for kids or they're caring for parents,” Koenig said. “You can't just throw dollars at them. It doesn't work, especially with unemployment as low as it is. They have a bad day, they can just go somewhere else, so the thought process was, ‘How do we get people to come to campus to stay, to be invested? How do we make the staff feel part of the family?’ If we can keep them here for a couple of months, we'll have a better chance.”

The wellness center, which will open soon, will include cardio- and strength-building exercise equipment for employees and residents.

Imagination Station – which runs similar centers in Alden, Elma, Batavia and Le Roy – agreed to take social services subsidies from parents who want to use its services, which are provided from 6 a.m. to 6 p.m. weekdays.

That will help parents who work on the GreenFields campus, though many of the new center’s 80-plus slots also are available to others who live and work near the 54-acre property along Broadway, about three miles east of Transit Road.

“Our program is full of love, it's full of snuggles,” said Aileen Wells, director of the Lancaster center. “It's a nice environment that's designed to meet developmental needs.” 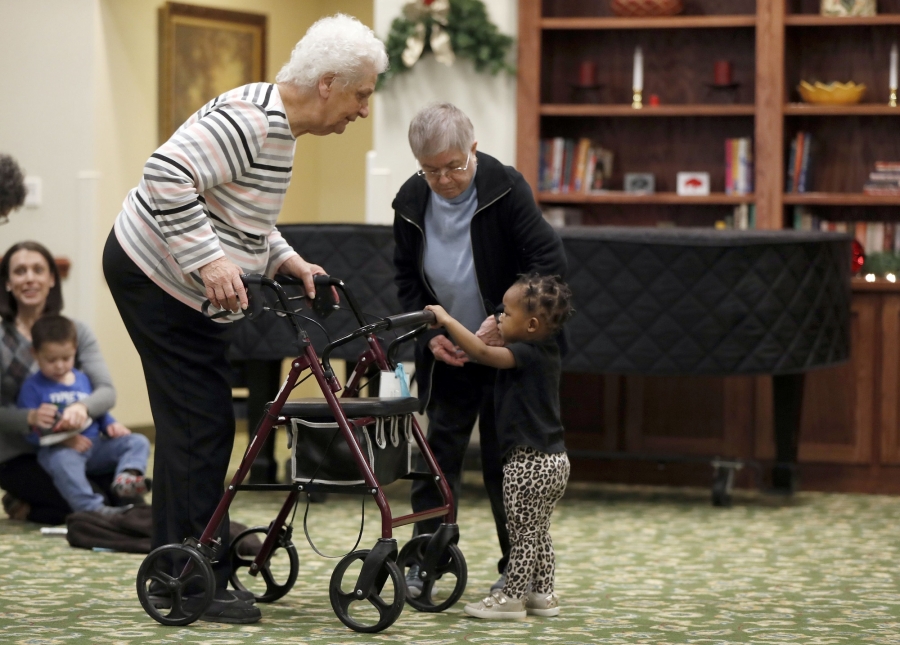 Imagination Station, which opened in mid-November, welcomes children up to age 12. Rooms are set aside for infants, toddlers, preschoolers and school-age kids. Parents can register children up to five days a week, before and/or after school, and during school breaks. The Lancaster school district can pick up or drop off children there.

Related intergenerational programs – as many as two each week – already have been a hit.

“When the kids get there, the residents light up,” the campus CEO said.

Joan Billittier and Paige Serio got together one day last month to paste shapes onto a purple sheet of construction paper as part of a collaboration Billittier couldn’t have imagined two years ago when she moved to the campus.

Her arts-and-crafts partner was 27 months old.

“I liked it very much and I love the children,” said Billittier, 85.

Research shows that such interaction boosts energy and memory retention for those who are older, helps build empathy, and future civic engagement and academic skills for the younger set, and can lower feelings of isolation and depression in both age groups.

Koenig said the intergenerational programs also have become a good way to expose staff – including doctors and nurses in training – to exciting parts of the geriatric field.

“I think it's going to enhance relationships between the staff and the residents,” he said, “and that always helps with job satisfaction.” 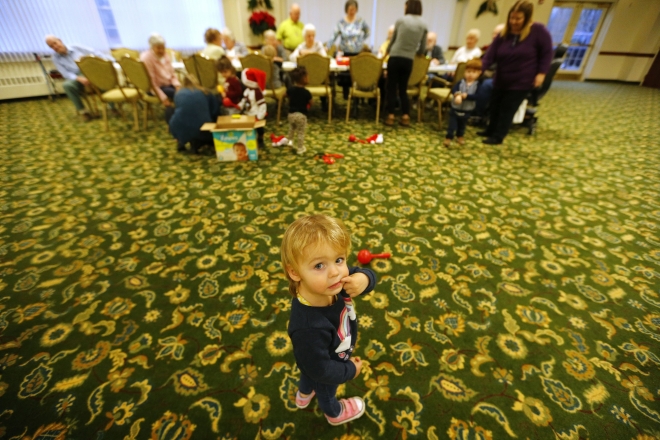 Logan Wysocki takes a break from making a craft with residents at the GreenFields Continuing Care Community. (Mark Mulville/Buffalo News)

It has taken an investment of more than $90 million over two decades to build the campus, which Koenig describes as a college atmosphere for the elder set, with hotel-style dormitory living that includes food, engaging social opportunities, and fitness programs. It's all designed for the best well-being possible, he said.

It also allows couples who age differently to stay as close as possible – even when one is in assisted living and another in skilled nursing care.

“We have a bus that goes around the campus and transports folks between the different buildings,” Koenig said, “so they can still spend time and eat meals together. Then, at the end of the day, they can go home and recharge, relax, have a little bit of a social life.”

To be sure, other regions have advanced more than Western New York in elder care. Pioneers have included college students who live in senior living facilities in Chicago and get free room and board in exchange for cooking, cleaning and regular support for their elder living mates. A growing number of elder campuses also have added single- and multifamily housing units for those of all ages.

“I can see that coming here,” Koenig said.