HOUSTON – At a difficult moment, Greg Kopacz knew where to find comfort. His family home was wrecked by flooding in 2017. He and his wife, Carrie, began rebuilding for their children, a slow and sometimes discouraging job, and Kopacz one day took a quick, familiar break.

On an autumn Sunday, he went to Christian's Tailgate Bar & Grill Midtown. It is home to the Houston Bills Backers, Western New York natives who routinely gather, at least 100 strong, to watch their team. Kopacz, a Niagara County native who is now a retired firefighter in greater Houston, was among the founders.

At the bar, weary, he told another regular he knew only as Terry about the struggles with the flood and the house. Terry listened, taking it in. Kopacz got up to use the restroom, and returned to a slip of paper by his seat.

“I’ve known Greg for a while, and I knew he had a wife and kids, and he was going through a hard time,” explained Terry Dole, a North Collins native who moved to Houston about 40 years ago.

The check illustrates the lasting bridge between the City of Good Neighbors and the Texas transplants. They will greet a cascade of Buffalo-happy playoff visitors this evening at Christian's for a welcome party so big that Katie O'Brien, president of the Houston Bills Backers, obtained a permit to close the street.

[Sean Kirst: For Niagara County native in Houston, family is stronger than flood]

Dole left Western New York for Houston at 19 or 20 “because there was nothing much going on in Buffalo,” during a hard economic era when thousands of young people looked toward booming Sun Belt towns. He built a life in a new city, retiring as director of operations for The Houston Chronicle.

Now 59, he said with good humor that he and his wife Tania, Texas-raised and a Houston Texans fan, “have agreed to divorce for a few days” until the end of Saturday's showdown between the two teams. 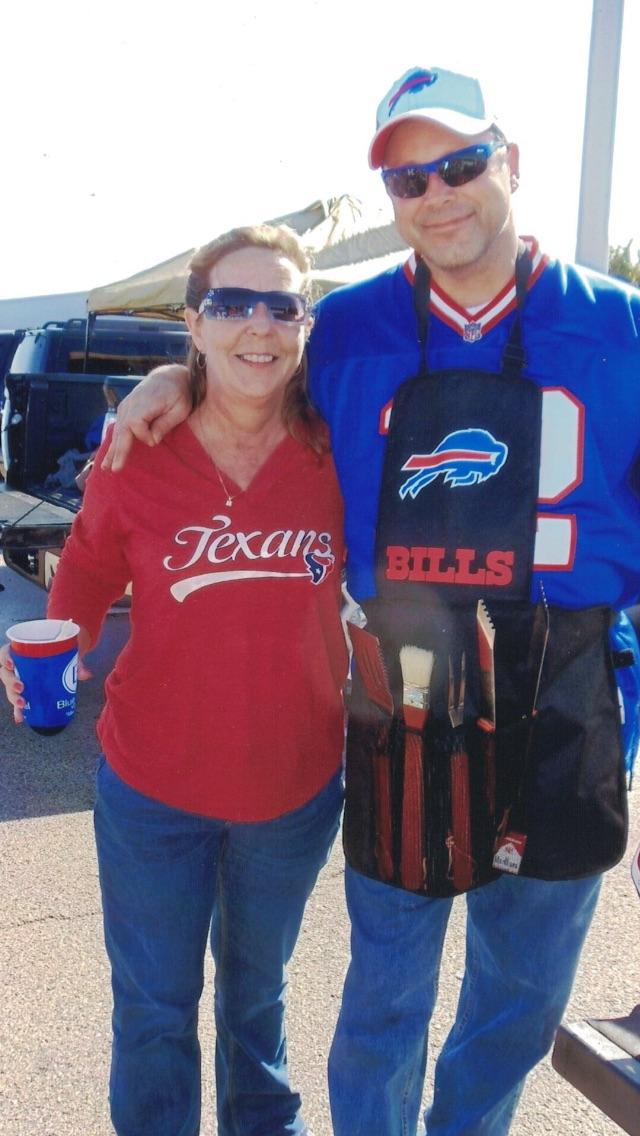 Terry and Tania Dole: Things are a little tricky this week. (Family photo)

As for Kopacz, he moved here as a middle schooler with his parents, who left Niagara County for better work and because they were sick of snow. While he and Dole are happy with how everything turned out, they speak of a wistful ache tied to the rhythms of Western New York life.

In a way far beyond even winning and losing, it all comes together in this football team.

“When you were a kid, whatever happened in your life, whatever worries, you had Sundays with the Bills,” said Joe Dotterweich, 62, a Hamburg native who is now in Houston. “That’s never left.”

Dotterweich has been thinking a lot of those transitions. A close friend, Robert Seufert, a Langford guy often called “Bubber,” died on Christmas Eve. Seufert wore a Bills cap in his casket, Dotterweich said.

The two youthful buddies were seriously hurt in a car accident in the late 1970s. Dotterweich, at the time, was tending bar, working at Republic Steel and utterly restless. The close call brought him to a decision. He left to visit friends in Texas, which became his home.

Dotterweich settled in Houston. A T-shirt operation started from the back seat of his car exploded into prosperity under the name "Bull Shirts," to the point where he holds season tickets for the Bills and Sabres – and often travels back to use them.

A year ago, he created a memorable T-shirt to honor Ezra Castro, often known as Pancho Billa, the Bills fan whose death from cancer last spring touched off mourning among the #BillsMafia. Dotterweich is thinking about something new for Saturday's game, while Bills Backers president O’Brien and a friend, Texas native Stuart Renfro, do their best to accommodate a deluge of incoming fans.

When the Bills played the Texans last season, O’Brien tried to set up a giant tailgate party in a lot at NRG Stadium. The Texans brass objected, to O’Brien’s frustration. This time she turned to Mazen Baltagi, a co-owner of Christian’s, who referred her to the operator of a private lot with 800 parking spots on Fannin Street, near the stadium.

The Buffalo faithful will gather there Saturday to tailgate. It will be bring-your-own-food-and-drinks, with the owner charging $40 a car and $10 for walkups in return for parking, portable toilets and the cleanup. Such legends of the #BillsMafia as Pinto Ron and Captain Buffalo are expected to be, well, on the active list.

“Katie is amazing," said Derek Kopacz, Greg's cousin and the guy who got the Houston Bills Backers rolling. "She's taken all of it up a notch.” 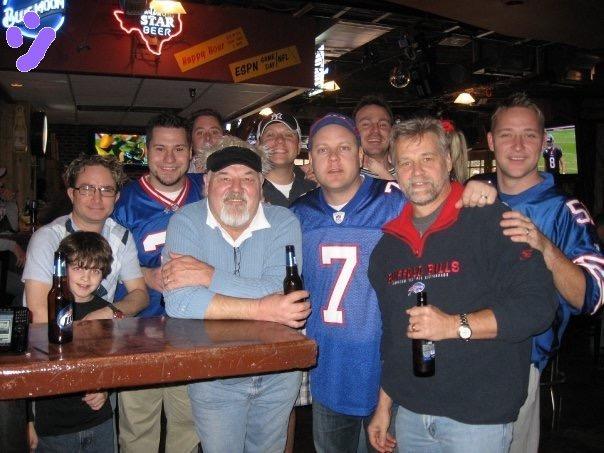 An early shot from the 2000s of the Bills Backers regulars at Christian's, many of them from Kopacz family; founder Derek Kopacz, in Yankee cap, is in back, left of center. (Kopacz family image)

The lore of Bills loyalists in Houston must include Sam Sansone, a Lockport native who came to the city after serving in the Navy. Photos of people crawling out upstairs windows into mountains of snow amid the Blizzard of '77 helped provide motivation for the move.

He founded a bar, Sansone’s, that was a regular stop for a couple of guys named Kelly, whose brother Jim moved on from the Houston Gamblers of the old United States Football League to lead the Buffalo Bills to glory. Soon, Sansone’s was a home away from home for those missing Buffalo.

Twenty-seven years ago, on the morning of a Bills-Houston Oilers playoff game at then-Rich Stadium, Sansone arrived to find his place plastered with signs reading, “This is an Oilers bar.” At halftime, with the Bills losing 28-3, the joyful culprits showed up to hand out tissues. 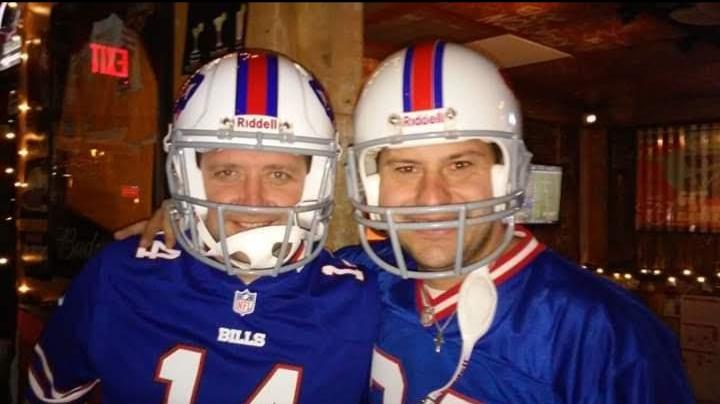 In a twist Sansone called "too good to be true," the Bills staged the greatest comeback win in National Football League history. “To their credit,” Sansone said of the Oilers pranksters, “they came back after the game to buy everyone drinks.”

In 2003, Sansone sold the bar. At roughly the same time, Derek Kopacz was telling his cousin, Greg, and others in their family how Christian’s might be a good spot to watch the Bills. “It started from basically nothing," said Derek, recalling how then-owner Steve Christian gave them a little space in back, where he stored kegs.

“Word got out,” Greg Kopacz said. Soon there was bleacher seating in the keg room for Bills fans, who began sprawling onto the main floor. Before long, you could watch the games on a main screen, but Christian – conscious of fans of Texas teams – told the regulars, “I still can’t give you sound.”

Today? Derek, long ago, added the group to the nationwide list of Bills Backers. Not only does play-by-play of Bills games ring throughout the bar, but customers drink Labatt and eat Sahlen's hot dogs while a disc jockey provides music tailored specifically toward the Buffalo crowd.

"If you're not a Bills fan and you walk in there on a Sunday," Derek Kopacz said, "you're going to turn around." 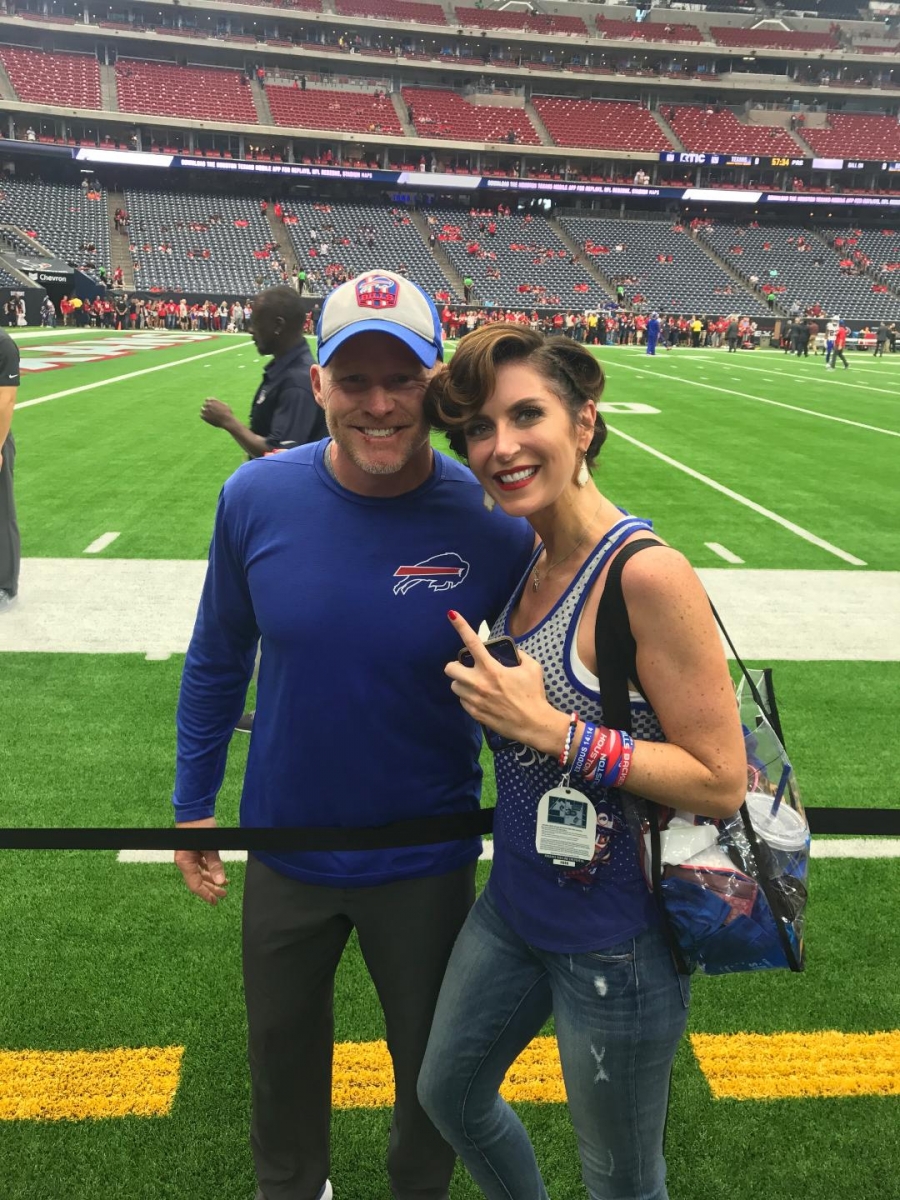 O’Brien, he said, took on the presidency once he left to work in Oklahoma City. She recalls being afraid Baltagi and his partners might turn away from that Buffalo theme in 2013, when they purchased the bar. There was zero cause to worry.

“I used to live around the corner,” Baltagi said. “I was familiar with Bills fans, the way they are so 'ride or die.' They were one of the reasons I bought it.”

Indeed, O’Brien – a 36-year-old neuropsychologist from Kenmore who moved to Houston for graduate work and never left – convinced Baltagi to join the Bills Backers on a Denver excursion, where he received a memorable taste of #BillsMafia euphoria.

Baltagi is a born-and-raised Texan, but he knows a phenomenon when it falls into his lap. After contemplating how this column will not necessarily be seen by, well, the eyes of Texas, he offered a confession bordering on full conversion.