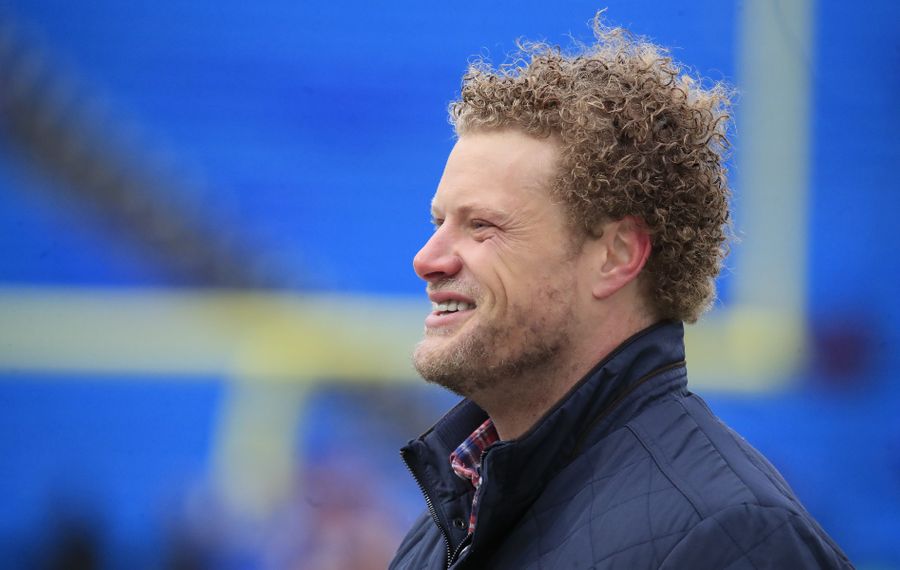 It was a year in which two local stations changed general managers, streaming changed the way Western New Yorkers watch television, and CBS changed evening news anchors much to the disappointment of fans of Kenmore native Jeff Glor.

The change in general managers at WIVB (Channel 4) and WKBW (Channel 7) late in 2019 could turn out to be the most significant news of the year.

Channel 4’s Dominic Mancuso left for Indianapolis and was replaced by Brien Kennedy, who was known for shaking things up when he was the GM in Philadelphia, a much bigger TV market. Time will tell if he does the same thing in Buffalo, a market resistant to change.

Channel 7’s Michael Nurse was let go by station owner E.W. Scripps after six years as GM and 12 years before that as station manager, and replaced by Marc Jaromin. Jaromin quickly cut some off-the-air, long-term staffers, which suggested Scripps is losing patience with the pace of the station’s attempt at a turnaround. The cuts included the GM’s personal assistant. A veteran director who is on medical leave battling cancer also declined to reapply for his job, apparently because he felt he might be terminated because of his age and salary.

Let’s quickly go to the highlights of the year in local media:

The TV Year of the Women: In a sign of the times, 22 of the last 23 reporters hired by the news departments of the three network affiliates by September were women.

TV Reporter of the Year: For the second straight year, WKBW investigative reporter Charlie Specht, whose coverage of the crisis in the Buffalo Diocese earned him a prestigious duPont Award, as well as being featured with his family on an edition of ABC’s “Nightline” reported by Buffalo native David Wright.

Best Trade of the Year: Eric Wood for Mark Kelso. The Buffalo Bills radio broadcast has improved with the former Bills center showing his expertise in a lot fewer words than Kelso ever did.

Worst Trade of the Year: New CBS News President Susan Zirinsky booted Glor off evening news and replaced him with Norah O’Donnell and called her a game-changer. In Buffalo, she has become a channel changer. Glor, meanwhile, has settled in nicely as one of the anchors on "CBS This Morning: Saturday," doing long-form features.

Complaint of the Year: Erie County Executive Mark Poloncarz filed a formal complaint to the Federal Communications Commission over a threat made by a caller to a WBEN-AM talk show whose remark went unchallenged by the show’s host.

Larry David Annoyance of the Year: Spectrum customers repeatedly were dealing with frozen pictures and blank screens while watching NFL games on WUTV, even after the station’s general manager said the issue was fixed. It better be resolved by Super Bowl Sunday, since the Fox affiliate is carrying the game.

Trend of the Year: The number of interracial relationships in series and commercials continues a trend, but is more noticeable now. The decline in racist complaints is a positive sign.

Ratings Story of the Year: Channel 4’s owner, Nexstar, dropped the Nielsen ratings service, which made it harder to get ratings in Western New York because the station’s rivals were prevented from sharing Nielsen information so Channel 4 wouldn’t get it for free. The highest-rated programs in Western New York by far were once again Bills games.

Commercial of the Year: Who doesn’t love the commercial in which a father is giving his daughter cooking advice remotely from a different location with the aid of Alexa before her date arrives?

Comeback of the Year: Season 3 of Amazon’s “The Marvelous Mrs. Maisel.” After the disappointment of Season 2, Season 3 with stand-up comedian Midge Maisel (Rachel Brosnahan) going on tour was back in style, even though its ending was a downer.

Snow Job of the Year: NBC’s “Today” sent correspondent Ron Mott to Buffalo to cover a Midwest snowstorm in November, even though the streets here were devoid of the white stuff.

Tradition Move of the Year: The Variety Club Telethon announced it is moving from Channel 7 to WGRZ (Channel 2) in prime time and to WBBZ on Sunday.

End of an Era: Must-see TV in Buffalo. With Disney+ and Apple TV+ joining Netflix, Amazon and Hulu in the streaming wars, network television viewership in Western New York continues to decline to the point few programs here hit a double-digit rating and new programs are considered hits with a live rating of 5.

Future Look: The local stations seem intent on capitalizing on the streaming phenomenon by hiring reporters to work primarily on digital content.

The Morning Show: After being let go by Star 102.5 apparently due to national financial problems that owner Entercom is experiencing, Roger Christian re-emerged as the morning host at WECK in place of Tom Donahue and Gail Ann Huber.

And the answer is Jason Zuffranieri: And the question is, who was the “Jeopardy!” star with Western New York roots this year? He wasn't in James Holzhauer territory, but he earned $532,496 from 19 wins.

Emotional Radio Story of the Year: WGR host Jeremy White gave an extended, heartbreaking account of the loss that he and his wife, Molly, suffered when they lost their quadruplets.

The Exodus of the Year: Channel 4 saw several of its reporters exit early in the year, most for bigger markets, including Marissa Perlman, Jenn Schanz, Rachele Mongiovi and Angela Christoforos.

Commentary of the Year: In the worst public relations move of the year, Specht was excluded from a Buffalo Diocese press conference in September. That led Channel 7 anchor Keith Radford to deliver a rare commentary blasting the diocese for trying to “manipulate the coverage” and calling it “a slap in the face to journalists everywhere, a fragrant attempt to muzzle the media.”

Best Career Switch: Steve Boyd, a former Channel 7 reporter who won awards for his coverage of sexual abuse allegations in the Buffalo Diocese in the 1990s, is now winning financial awards as a key advocate for people who say they are victims of the sexual abuse scandals enveloping multiple institutions in Buffalo and elsewhere, fighting for them in lawsuits against priests in the Buffalo Diocese, teachers and adult Boy Scout leaders.

Award Show Host of the Year: James Corden, the host of CBS’ “The Late Late Show,” hosted the Tony Awards with an amazing opening number on the CBS telecast that celebrated the joy of watching something live over all the recorded programs carried on streaming services and cable.

History Maker of the Year: After Joe Buscaglia left as the sports director at WKBW, Matt Bove replaced him and appears to be the youngest sports director on a local Buffalo affiliate in TV history.

Innovation of the Year: Channel 2’s “Most Buffalo” starring Kate Welshofer. It isn’t my taste, but Welshofer is perfectly suited for the new 4 p.m. news-oriented program and heaven knows WNY has enough conventional newscasts.

One of the Saddest Revelations of the Year: With the long-awaited “Deadwood” movie arriving on HBO, award-winning Buffalo native David Milch revealed he has Alzheimer’s disease.

Will the Real Ed Kilgore Please Stand Up: Someone in a parody Ed Kilgore account claimed to be the former Channel 2 sports director and started a war of words between the real Ed, who left Channel 2 in 2013, and WGR Sports Radio 550 sports reporter Paul Hamilton. The real Kilgore then got involved in a Twitter exchange with the fake Kilgore over which one was real and which was fake. Some people thought it was hilarious.

Locker Room Speech of the Year: One of the most famous speeches in Bills history was on display in a March episode of the CBS comedy “Mom,” in a scene written by Buffalo native Nick Bakay and performed by Western New York native William Fichtner. The scene reminiscent of the classic locker room speech by late Bills coach Lou Saban came as Fichtner’s character, Adam, a bar owner, delivered a pep talk to two waitresses before they had to work 12 hours at a sports bar during March Madness. Adam started by telling them to “keep pounding those fluids” as Saban did in his speech. Then he repeated Saban’s famous lines. “If we die, we die together. You can get it done, you can get it done. And what’s more, you’ve gotta get it done.”

Most Memorable Viral Moment: Buffalo’s “Singing Cops,” Michael Norwood Jr. and Moe Badger, parlayed a clip of singing at a downtown restaurant that went viral into an appearance on “Ellen” and a deal with a production company for a potential sitcom.

Local “SNL” Moment of the Year: Even Steve Barnes loved the Cellino and Barnes parody in March in which “SNL’s” Alex Moffat played Cellino and Kyle Mooney played Barnes in a skit called “Legal Shark Tank.” Cellino and Barnes were the guest lawyers on a panel show that included actors playing lawyers Michael Avenatti, Jeanine Pirro, Alan Dershowitz and Rudy Giuliani defending famous celebrities. The Buffalo lawyers were introduced as “the jingle-based attorneys” in a funny skit. In an email, Barnes clearly enjoyed the attention and the free advertising. “I thought it was hilarious,” wrote Barnes. “I thought that the guys playing us were very funny.”

Most Appropriate Title: The Netflix series “Unbelievable” was one of the best things I’ve seen all year. Based on a true story, it is about two female detectives who fought to discover the truth about a teenager who was raped and recanted her story under pressure from a disbelieving male detective.

Best in Show: Confession time: There is no way any critic can see close to everything, which may be why your favorite show isn’t on the list. I haven’t had time to see one episode of HBO’s “Watchmen,” but here is the best of what I have seen. “Fleabag,” “The Good Fight,” “The Loudest Voice,” “Succession, “Modern Love,” “Game of Thrones,” “The Big Bang Theory” finale, “Leaving Neverland,” “Free Solo,” “Blue Bloods,” “This Is Us,” “The Kominsky Method,” “Last Week Tonight with John Oliver,” "Dirty John," “Saturday Night Live,” “Unbelievable,” “Bosch,” “Dead to Me,” “Younger,” “Chernobyl” and “Quicksand.”