Nearly three dozen elementary school students of modest means have a brighter athletic and academic future, in part because a Buffalo native wasn’t quite sure what career path to take after she graduated a decade ago with a sociology degree from Vassar College.

“I thought perhaps a lawyer or maybe a teacher. I wasn't really familiar with the idea of having a career in the nonprofit sector,” Hope Blinkoff Lynch said.

Blinkoff Lynch landed a job as squash coach with Baltimore SquashWise in Maryland, an organization with a modest, though powerful opportunity for the families of modest means: Start with a small group of elementary school students, teach them squash while fostering their educational success, and help guide them through elementary and middle school, high school and college, and into careers of their own.

The program looks to add more students each year and is free to those accepted.

“They pay us with their involvement and their effort,” Blinkoff Lynch said.

She grew up in the Parkside District. She played three years of squash on the Nichols School team and another four years in college. She climbed the SquashWise organizational ladder during 7 1/2 years, becoming deputy director about the same time Western New York squash enthusiasts closed in on creating a similar program.

In 2017, those organizers asked Blinkoff Lynch to lead 716 Squash. Nardin Academy offered to lease space in its new Delaware Avenue athletic center, local fundraising efforts – spearheaded by an active board of directors led by Richard Lynn and Carrie Anderson – created momentum and Lynch helped secure a $375,000 matching challenge grant from the Ralph C. Wilson Jr. Foundation to get to work.

A year later, 716 Squash, like its sister organization in Baltimore, became part of the Squash Education Alliance, or SEA.

All members share the same mission. More than 2,500 students and young adults in 28 cities have benefited internationally as a result; 95% of program graduates in the U.S. go on to college and about 65% graduate within six years, compared to a national average of about 23% for all low-income students. 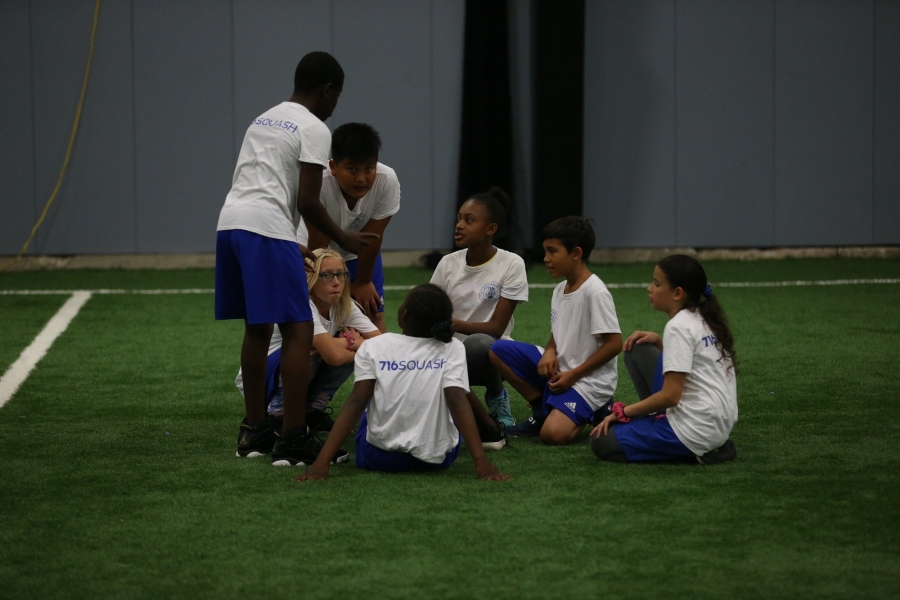 Students enrolled in 716 Squash work on strategy for a flag football game at Nardin Athletic Center. It's part of an overall strategy to improve teamwork, sportsmanship and better overall health. Elementary school students in the program come from two Buffalo elementary schools and have roots not only in Buffalo but on other continents. (John Hickey/Buffalo News)

This school year, 716 Squash is nurturing 33 students in fifth through seventh grades at two schools: West Hertel Academy and West Buffalo Charter School. The plan is to continue to bring elementary school students into the program as it ages.

The Baltimore program had about 24 kids when Blinkoff Lynch started and 75 when she left.

Town of Holland native Madison Hanel is the 716 Squash academic coordinator. The squash instructor is Lenard Puski, a top junior player in his home country of Hungary who graduated from St. Lawrence University in May. His duties include scheduling program participants for tournaments in sister SEA cities including Boston, Chicago and Detroit, and at colleges that have included Yale University in Connecticut, Williams College in Massachusetts and Kenyon College in Ohio.

Both work with Blinkoff Lynch to see that their young charges split time between class work and squash at summer camps and three-day-a-week after-school sessions.

“In my mind we’re an education-first program,” Blinkoff Lynch said. “I would prefer that our kids end up graduating high school and going to college or having a career and feeling that they got a good education with our assistance, more so than them being a top collegiate squash player or athlete.

“My hope is that the squash inspires them to be more physically active, to develop lifelong habits of health and wellness and fitness.” 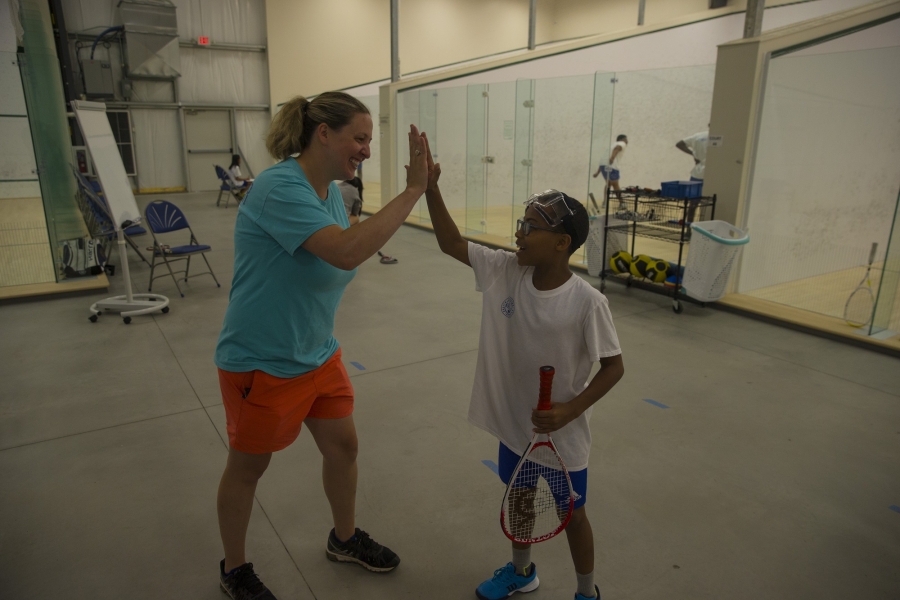 Hope Blinkoff Lynch, executive director of 716 Squash, high fives Dewitt Yomane, 9, after he won his squash match. Students in the program have participated in tournaments in several states and on several college campuses, including Yale University. (John Hickey/Buffalo News)

An aptitude for squash and academic excellence isn’t paramount for acceptance into the program, which starts with tryouts.

“We wanted this more than anything to be a safe and supportive environment where kids felt comfortable being themselves and for kids who were being positive and lifting each other up,” Blinkoff Lynch said. “It’s our job to build that sort of environment and that culture but we wanted kids who were on board with the idea of working hard and being kind to one another. That's what we look for in our tryout process.”

That process includes how committed students and their families are to regular program attendance. Volunteers make it more manageable by offering to pick up kids from school during the academic year.

Many students from the program are former refugees from Burma, the Congo and the Middle East. Others have roots in Puerto Rico. Many others are from families who have lived for generations on Buffalo's East Side.

“This is a great place for them to find some commonalities on the squash court and in the classroom,” Blinkoff Lynch said, “and be part of a team together.”

A small percentage of kids drop out along the way, for a variety of reasons, Blinkoff Lynch said. Some move with their families. Some transfer to other schools. Some lose interest or no longer want to live up to program expectations and are asked to leave to preserve a safe and supportive space for everyone else on the team.

“We’re very clear with students, parents and teachers about what our expectations are about working hard and being kind and treating everyone with respect,” she said, “and the students almost self-select themselves in some way.”

Blinkoff Lynch married Meg Lynch three years ago in Baltimore. She is from New England and also works in the nonprofit field.

“We’ve been really pleasantly surprised,” Blinkoff Lynch said. “Moving back after being away for several years, it's changed significantly. There's a lot more green space and parks than we had in Baltimore. Being so close to Delaware Park has been wonderful and being able to take hikes and walks and the waterfront downtown has been incredible. But I think the biggest thing for me and for her has really just been that people are nice here. For me, buy-in from people in the building and our board, and getting support from schools and teachers and the families of our students has been great. Everyone is just very engaged and very willing to help and go out of their way. They’re here to make sure that we know there are people who've got our backs. That's how we want the kids in the program to feel, like they have a ton of people in their corner supporting them rooting for them, wanting them to succeed.”