After the early start to wintry conditions in November, those signs of a long, harsh winter faded in December and stay faded at this time. After a day in the 40s on Friday, though, a little more winter is in the picture starting this weekend. Limited snow is on the way. It won’t work wonders on the slopes, and it will offer no assistance to snowmobilers, but it will provide some fresh cover and temporarily clean up a few paw prints … I hope.

What started as a mix of snow and rain will change to all snow early on Saturday, after sunrise.

The supply of steady snow won’t last long. Even by mid-Saturday afternoon, things are drying up.

Temperatures will be in the low- to mid-30s during the day, and some melting will be occurring. Odds favor plow drivers getting to stay put, though some salting may be necessary as black ice forms Saturday night. For a second opinion, even National Weather Service headquarters sees just a paltry 10% probability of any snow totals exceeding 4 inches.

In fact, model output is under 4 inches and probably at 2 inches or less at lower elevations. Some hills to the south and southeast could pick up 4 inches or so.

Some more snow showers will be arriving late Sunday and Sunday night, but I doubt they’ll be bringing any plows out on the roads. For skiers, snowmaking will be more of a contributor to keeping slopes in shape than will natural snowfall during this next week. Checking out the Holiday Valley webcam on Friday, there may not be fresh powder, but there is definitely skiing to be had.

Again, a few more inches of fresh snow will be arriving for Saturday. It won’t be cold enough for powder, but it will definitely help. At Kissing Bridge, similar bases exist on the open slopes.

Here are the latest listed conditions on WNY ski resorts as of the end of this week.

The good news for resorts during this next week is nighttime temperatures will allow for snowmaking. While readings will remain a little above average, we will be closer to normal for much of the upcoming week. As of this writing, the most productive snowmaking conditions may develop Wednesday night when readings in ski country drop into the teens.

No major snow is in sight this week. Some scattered snow showers may again return around midweek. However, by the end of the week, another pattern change will be evolving with the development of a warmer ridge of high pressure in the east and the cold air retreating to west. WNY will return to the 40s on Friday.

There is even some sardonic meteorological humor in my profession about this coming pattern. This year is the 100th anniversary of the American Meteorological Society, headquartered in Boston. When the AMS announced long ago the location and timing for its big conference, lots of meteorologists  (especially of the broadcast ilk) speculated on social media how “cool” it would be to get stranded in a classic Boston nor’easter the week of Jan. 13. A couple of days ago, Michael Ventrice posted the coming reality in the European model, and added a comment: “Well if you're hoping for a blizzard during #AMS2020 in #Boston next month, this isn't the pattern that you want to see...”

The renowned polar vortex will remain fairly strong, which bottles up the coldest of the cold air in the polar region. In this coming episode, what cold air does drop into the continental United States after next Thursday will be aiming for the West. That’s good news for Rockies resorts, and bad news in our part of the country. This is the new American GFS ensemble mean for days 11-15 out in time. Even to eyes unfamiliar with such graphics, the colors tell the story as to where the cold is and where it isn’t: 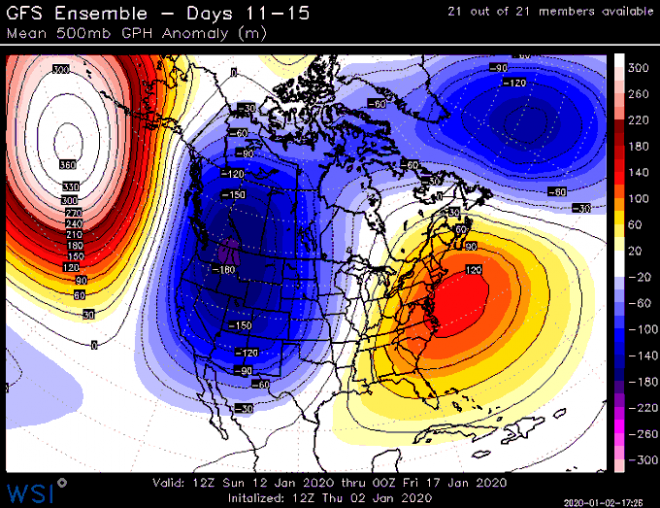 Long-range specialist Dr. Judah Cohen posted the upper level shape and location of the polar vortex in this animation through Jan. 18:

For the #PolarVortex (PV) 2020 is beginning just as 2019 ended with the PV centered near the North Pole and all the low heights confined to the #Arctic with no signs of polar warming. IMO hard to sustain #cold and #snow in the Eastern US & Northern Europe with a quiet & strong PV pic.twitter.com/VJFTOTI9Ea

Some of what’s driving the polar vortex to stay closer to the North Pole is a very complex oscillation with global impact known as the Madden Julian Oscillation/MJO. The MJO has eight shifting phases, each with global effects that change depending on the time of the year. The MJO phases are only predictable 2-3 weeks in advance, so if you think that presents a forecasting quandary, you are correct.

Somewhere beyond mid-January, there will be some kind of shift in the MJO phasing, and some changes will result. What those changes will be cannot be determined at this time. In the meantime, after a period of days in the 30s from Saturday through Thursday, here are the probabilities on above and below temperatures in days 8-14 from the Climate Prediction Center.

If you care to crane your neck with me out to the least-reliable part of an ensemble – the last part – the American GFS is still not showing signs of much pattern change heading into Jan. 19: 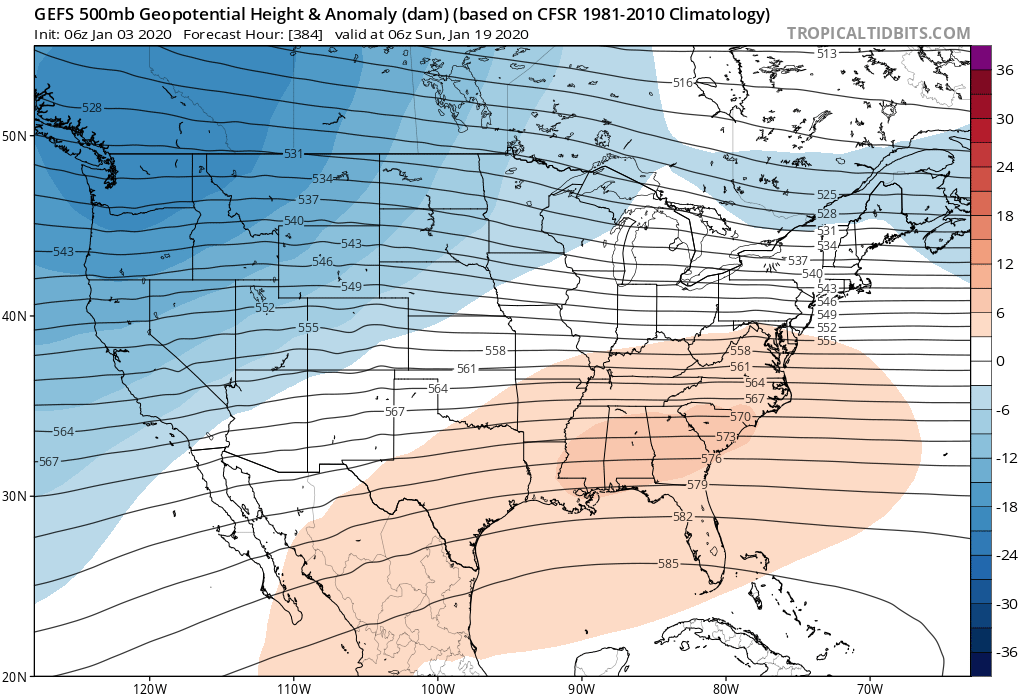 The one thing I can say with high certainty is Lake Erie will not be freezing up heading into the last third of January. Another might be dreaded paw prints will continue to ravage the floors of dog owners. With the number of paws in our house … oy!