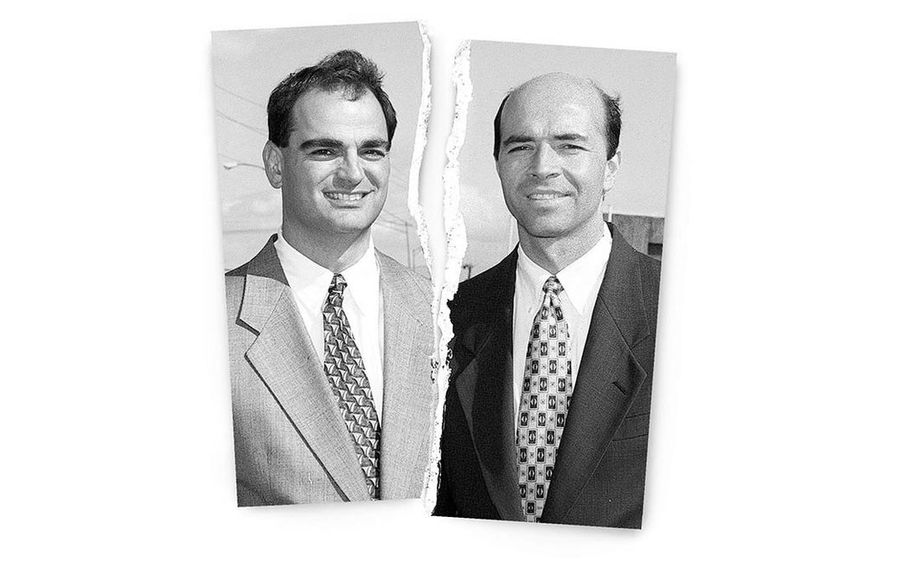 Personal injury attorneys Ross M. Cellino Jr. and Stephen E. Barnes have agreed to a breakup plan that will establish two separate law firms "in the very near future."

But they're still squabbling over the details – including whose IT guy can access files and whether a golf pro should be on the payroll of Cellino & Barnes.

The latest development of a lengthy and ugly breakup of the nationally known firm emerged Friday with new court documents in which Cellino stated publicly for the first time that the two attorneys were each making plans to open separate law firms "within the next 30 days."

Barnes, Cellino said, has told the court that he would agree to a dissolution of Cellino & Barnes – a move Cellino has been asking for since May 2017.

Terrence Connors, an attorney for Cellino, said: “Ross petitioned to dissolve and Steve opposed it but he now has agreed to it."

Cellino referred to “three years of needless wasteful litigation” in the document he filed Friday. Cellino went on to say that “Barnes has lost virtually every contested issue in this matter.”

“Respondent Barnes now accepts the reality of this situation and has advised this court that he will consent to a dissolution of Cellino & Barnes,” Cellino stated in the affidavit.

Barnes plans to unite his personal injury practice in Los Angeles, San Diego and the San Francisco Bay area with his practice in Manhattan, Long Island, Rochester and Buffalo, Barnes said Friday in an emailed statement. Barnes noted that Cellino has no ownership interest in any part of his West Coast practice, nor will Cellino be a part of the expanded national firm he will establish in the near future.

The two partners have been battling in court for years over the future of the firm. They have recently been in ongoing negotiations "regarding issues involved in the windup process" to open separate law firms, Cellino said in court documents. That includes getting technology and information systems ready for "day one," he said.

"The firm's clients need to know that there will be no interruptions to the prompt handling of their matters, and the efficient and secure transfer of all client information must be ensured," Cellino wrote in a court affidavit filed Friday. "Both respondent Barnes and I understand this and have separately made arrangements to have appropriate resources and personnel in place for our respective firms."

The 30-day dissolution timeline mentioned in Cellino’s papers is a goal, Connors said.

“A process will be put into place either by agreement or by Justice Chimes to address the cases that are still pending,” said Connors. “Once a dissolution occurs, the clients then have a choice. Ideally, they can go with Cellino, they can go with Barnes or they can go to a third party, but that has not been worked out yet.”

Negotiations have been ongoing with both sides working to dissolve the partnership, said Robert J. Schreck, managing partner of the law firm.

“During this process, cases will continue to be litigated without interruption,” said Shreck. “There will be no interruption.”

Those efforts, however, hit a snag in December over who has access to the Cellino & Barnes files, according to the court documents.

The division of the firm’s technology and information systems appear to be one of the more divisive issues, court papers indicated.

“There is a dispute now over access to the information technology, access to what is necessary for them to move forward with their own IT people,” Connors said.

A separate document filed on Friday by Barnes details some of his concerns over the dissolution and the access to the firm's information system.

Barnes, in court documents filed Friday, accused Cellino of giving his new IT director "unfettered access" to the Cellino & Barnes office and "confidential and proprietary information."

Barnes argued that the existing Cellino & Barnes firm "cannot continue to house the IT director of a future new Cellino Firm who has no connection or role" with Cellino & Barnes.

Barnes also objected in court papers to Cellino hiring a golf pro on the Cellino & Barnes payroll without consulting him – an expense Barnes did not deem "necessary."

Barnes is asking a judge to prevent Cellino's new IT director from accessing the files of the existing firm.

Cellino, in court documents, responded that he has been "uncomfortable" with the fact that several current Cellino & Barnes employees are "actively working on behalf of" Barnes' current California firm and Barnes' "soon-to-open New York firm" but has not objected because he thought the efforts would move the two closer to dissolution and establishing separate firms.

Cellino also said he asked his new IT director to back up various files, including his Outlook data files with email and contacts, because he did not trust he would have access to them once the firm split up.

"I wanted these files backed up because, frankly, I was concerned that Barnes would take action to shut off my access to the computer systems once the dissolution was ordered," Cellino told the court.

Sources told The News in November that the two sides were negotiating a settlement to the long-running court feud that has thrust the firm's breakup into the public sphere. At the time, the two sides voiced hopes that an agreement will be reached before Jan. 14, 2020, when the case was scheduled to go to trial before Judge Deborah A. Chimes.

When he filed his lawsuit in 2017 seeking to dissolve the nationally known law firm, Cellino said he could no longer stand to work with Barnes because of disagreements over finances, personnel, advertising and marketing strategies and other issues. According to court papers, Cellino was upset when Barnes refused to let the law firm hire one of Cellino’s daughters, a respected Buffalo attorney.

In July 2017, Cellino called the relationship between him and Barnes “toxic” and said it was impossible for the two men to work together.

Barnes responded by accusing Cellino of "reprehensible conduct," including efforts to "pirate" lawyers and cases from the firm with the intention of beginning his own. Both Barnes and Cellino denied any wrongdoing and blamed each other for all the problems.

Their firm, meanwhile, has continued to operate as one, with Barnes acting as president and overseeing the day-to-day management and operations.

Barnes remains confident that there will be no interruption in service provided to all firm clients, he said in the emailed statement.

Cellino vs. Barnes: Behind-the-scenes talks could lead to peaceful breakup