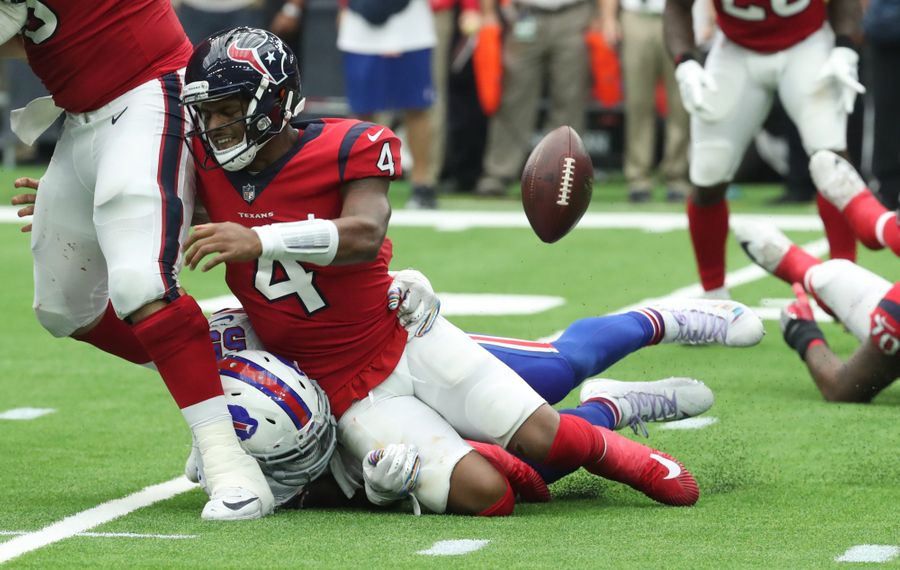 Deshaun Watson does not enter the playoffs on a big roll.

No one questions his standing as one of the dynamic, young star quarterbacks in the NFL. But the 24-year-old, third-year pro still is a young player.

Over the final six weeks of the season, Watson produced 201 yards passing per game, with eight touchdowns, seven interceptions and a pedestrian passer rating of 79.1.

He is spectacular at times, as in the 28-22 win against the New England Patriots in Week 13. But he has had ordinary moments of late, too. The Texans were upset by Denver, 38-24, and routed by Baltimore, 41-7. Despite getting five takeaways at Tampa Bay in Week 16, Houston only squeaked by (23-20), with Watson throwing for 184 pass yards and a pickoff.

“He’s actually not played that well over the past month,” analyst Greg Cosell of the ESPN "NFL Matchup" show said recently. “He has made the offensive line at times look bad. ... He doesn’t set and plant with a firm base, he drops his eyes at times. He’s not playing with a calm helmet. He’s leaving the pocket prematurely.”

Make no mistake, Cosell acknowledges Watson makes amazing plays. In the New England game, the Patriots played man coverage across the board. Watson's accuracy and the elusiveness of the Texans’ star receivers burned the Pats.

But if the Bills can keep him in the pocket and give him some muddy zone looks, they have a chance to contain the Texans’ offense. The Bills did it in last year’s regular-season game in Houston. The Colts did it with a zone-based scheme in last year’s playoffs. Sean McDermott’s old team, the Panthers, did it in beating the Texans, 16-10, in Week 4.

Watson, whose leadership traits are unquestioned, took responsibility this week for the Texans’ offense not scoring more points of late.

Watson does not have Josh Allen’s cannon arm. But he is a fantastic touch passer, better at dropping the ball “into the bucket,” over receiver’s shoulders downfield than Allen has been this year. And he is hard to bring down.

The Bills were stressing the need to keep him in the pocket this week. That’s not because he doesn’t make plays from the pocket, but because he’s so dangerous outside it.

“You see guys giving up pressures and opportunities to hit Deshaun, but he is shrugging guys off or scrambling,” Bills linebacker Lorenzo Alexander said. “He has an innate ability to make plays because he’s an elite athlete. Impacting him with our coverages, maybe make him pat the ball, corralling him in the pocket so you have not just one guy but a second and third guy coming in, that’s what we have to do.”

Run blocking: Winning the line of scrimmage will be critical for the Bills’ defense, especially because Buffalo should have matchup advantages at three spots. The Texans have good players in left tackle Laremy Tunsil and center Nick Martin. But left guard Max Scharping, right guard Zach Fulton and right tackle Chris Clark all are not that powerful in the run game. They’ve done better pass blocking.

The Texans will use a lot of misdirection in the run game, with jet and “orbit” motion (with a wideout cutting in a loop behind the back). They run split zones, with the tight end blocking, and pull guards in gap scheme runs.

“I see some tendencies incorporating a little bit of what the Ravens have done,” Alexander said. “It’s a copycat league so you’ll see a lot of similarities between offenses that have similar personnel. Lamar Jackson and Watson are similar in terms of their running skill set. You see some of the misdirection with the jet sweeps, bringing a tight end back across and maybe bypassing the defensive end and now trying to create leverage on the outside where Watson can keep the ball and have a lead blocker. They mix that in. Then they’ll do the same look, but he’ll hand the ball off and maybe an end will jump out of his gap. You really have to have gap integrity.”

The 30,000-foot view: The Texans have won the AFC South for the fourth time in five years. The future looks bright for the franchise, because of its QB advantage. The other three AFC South teams are searching at the position. Indianapolis might have an answer in Jacoby Brissett, but he’s not as talented as Watson. Winning the division again also probably cemented coach Bill O’Brien’s power as the top decision-maker in the football department. The Texans are likely to remain without a true general manager.

Tre’Davious White vs. DeAndre Hopkins. It’s the obvious marquee matchup. The Bills’ Pro Bowler has not allowed a touchdown reception in 84 targets this season, according to Pro Football Focus. Hopkins tied for third in the NFL in catches with 104. He’s not the greatest route runner, believe it or not. But he has incredible hands, a big catch radius and he’s great on the boundary. The Texans love to run the fade to him down the sideline.

Josh Allen vs. Romeo Crennel. The Texans blitzed on 35% of pass plays, which ranked 10th in the NFL, according to ESPN. The Texans’ defensive coordinator generally blitzed veteran QBs a little and young QBs a lot. QBs had 11 TDs and eight INTs vs. the Houston blitz, but four of those INTs were by pick-machine Jameis Winston. Look for Crennel to attack Allen.

J.J. Watt vs. Cody Ford & Co. Watt is a game-wrecker, and the Bills probably can’t count on him playing a poor game, even though he hasn’t played in two months due to injury. The issue is the Bills will have to give Ford help, which will take a receiver out of the pass pattern, or delay his route. If the Bills can keep Watt from forcing any turnovers, it will be a small victory.

Stats for the road: The Texans like to establish the run. In one-score games, Houston ran 60% on first down, sixth in the NFL, according to Sharp Football. The top five were: Washington (67%), Baltimore (66%), Oakland (63%), Tennessee (62%) and Denver (61%). Kansas City passed the most on first-down in one-score games (57%). Buffalo passed 51% in those situations. Unless you have a bad quarterback, running 60% on first down is too much.