Co-owner Joelle Garofalo said it best when describing the new Casey's Black Rock. "It's a party bar with fat kid food," she quipped.

That's a departure from the previous iteration of Casey's Tavern, a longtime neighborhood dive at 484 Amherst St., not far from Wegmans, that closed in June 2018. Vincent Garofalo, Joelle's husband and a Casey's bartender for nearly four years, purchased the business and spent the next year and a half rehabbing and freshening the dilapidated bar.

Casey's Black Rock delivers on its promise of a lively atmosphere, with four themed pinball machines (South Park, AC/DC, Wrestlemania and the Sopranos), bubble hockey, an old-school Pac-Man arcade game, a Buffalo-made Super Kixx Pro and even a pseudo-lighthearted "penalty box" for unruly customers who need a brief timeout.

Local graffiti/tattoo artist Mic Excel helped with the eye-catching game room, which also touts a few tables for dining in. Football memorabilia of the Kansas City Chiefs and Buffalo Bills – Vincent's two favorite NFL teams, in that order – is prominent behind the bar, as is a sign that reads, "No politics, no religion."

"We're not interested in being pretentious," Vincent said, describing his aim to run a neighborhood-friendly bar to suit any demographic. Casey's is essentially a sports bar with games, but with more character than others described by the same general traits.

The alcohol-free penalty box is a prime example, adding a layer of amusement while doubling as a chance for owners and bartenders to tame late-night cavorting (spilling a drink, causing a ruckus, starting an argument, any sort of mischief).

An oversized scoreboard in the main bar area counts down from 2 minutes, with an awkwardly loud buzzer sounding when the stay is over.

Silliness aside, given his history there, Vincent intentionally appealed to longtime neighborhood regulars – who took more than a year to win over, he remembers – in addition to the Garofalos' friends in the restaurant industry and whomever evolving Black Rock attracts. 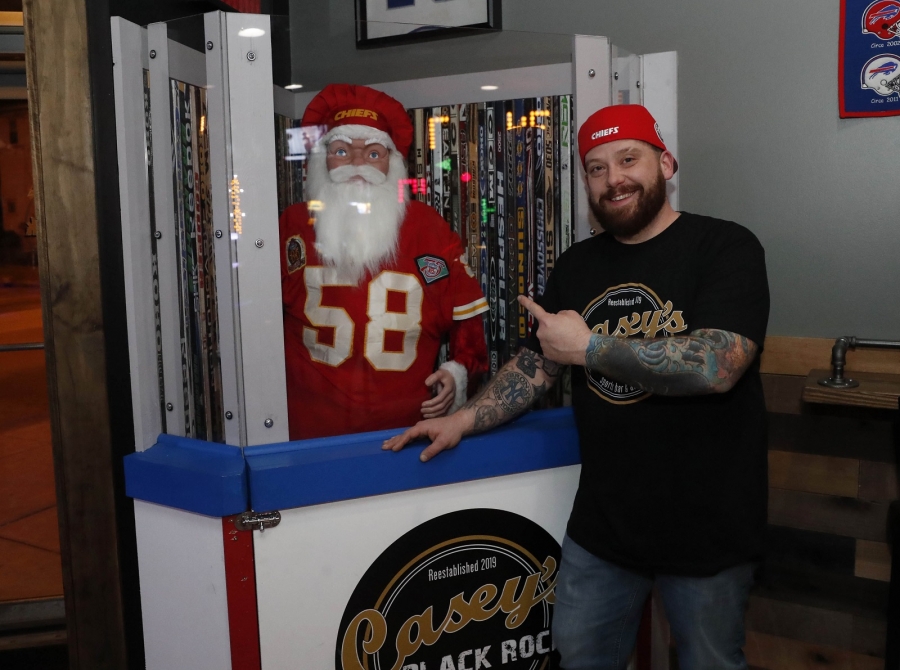 "When you have a customer base that good for 50 years almost, they deserve the upgrade as much as anybody," Vincent said. "They come in and I see the look on their faces, and [they'll say], 'You did good, you kept it, it's still Casey's.' "

Two former Dapper Goose employees tag team the bar and kitchen: Alex Wenzel heads a straightforward, approachable bar program – from $8 Manhattans, Old-Fashioneds and negronis to simple throwbacks such as Utica Club, Bud heavies, Miller High Life and Kessler whiskey – but you'll also find the owners frequently behind the bar, too. Many will recognize Joelle from Aroma on Bryant, where she still holds one shift a week.

A solid wine list, six beer taps – which included two local selections, Community Beer Works and Big Ditch – and a slew of bottles round out the drink options. 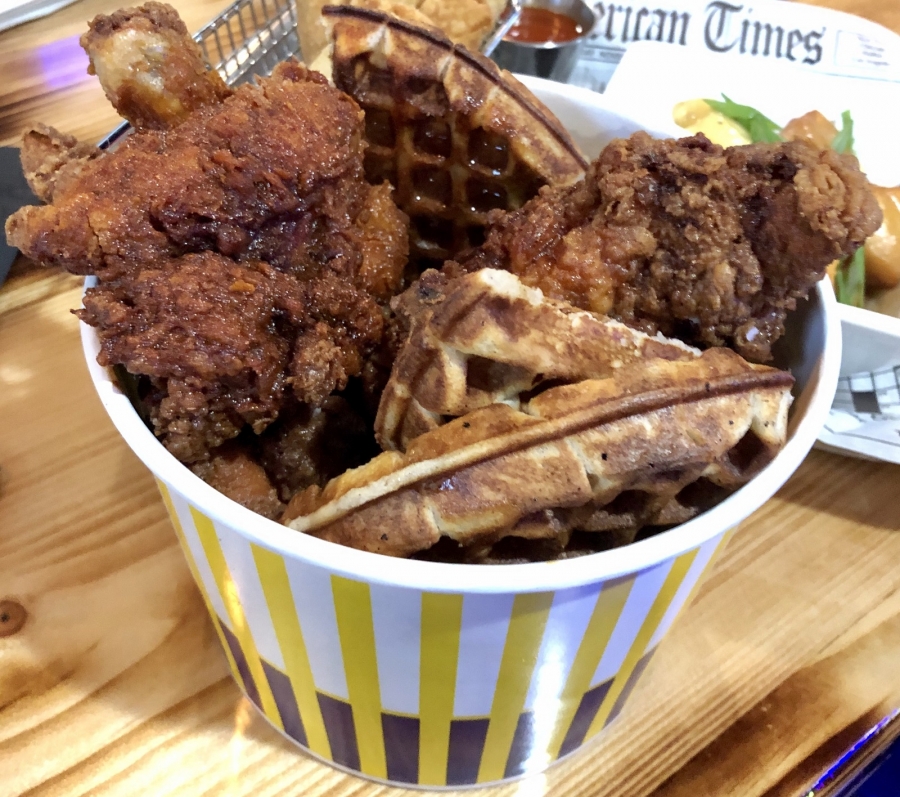 The chicken-and-waffles bucket ($15) is a massive helping with crispy, flavorful coating on the chicken, a pleasant sweet-and-spicy combo when paired with the freshly made waffles. You'll need a friend to help finish this.

Deep-fried housemade pickles (five for $9), a Blooming Onion ($10) and deep-fried Oreos (five for $8) complete the "Carnival Eats" section of the menu.

The pulled pork sandwich ($12, with hand-cut fries) stands out thanks to the pickles and roll, as well as a Carolina-style barbecue sauce that heightens the zesty flavor. Tater Tot poutine ($10) was fairly imaginative, with real cheese curds and gravy complementing girthy Tater Tots. 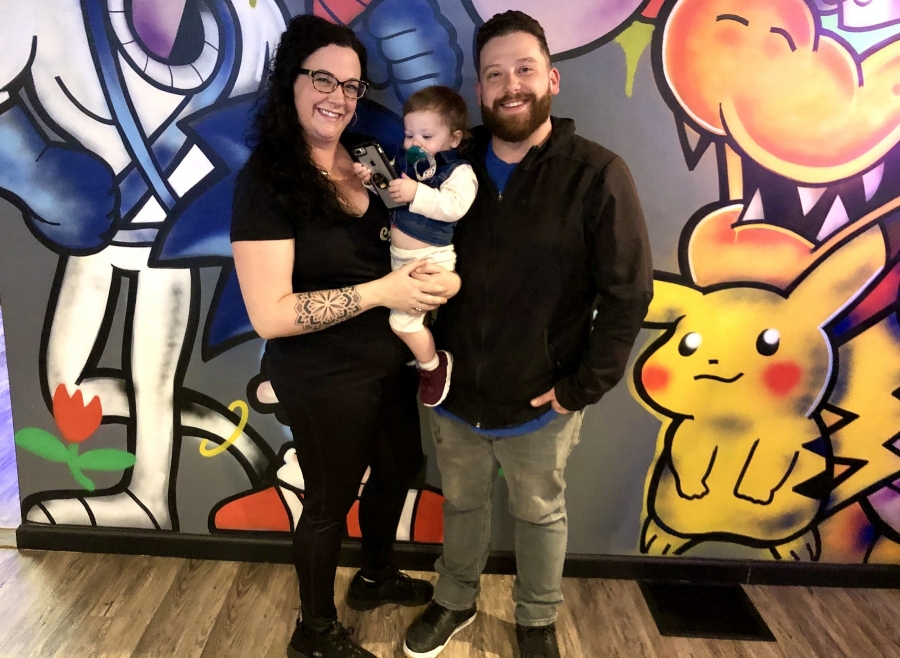 Casey's popular fish fry ($15) – Fridays only – is carried over from the previous regime and is available battered, broiled or breaded with a litany of sides.

With cool food-and-drink businesses such as Dapper Goose, Rohall's Corner and Spar's European Sausage all within a few blocks of Casey's – between Grant Street and Wegmans – the Garofalos' new venture is a strong addition to the Black Rock landscape. 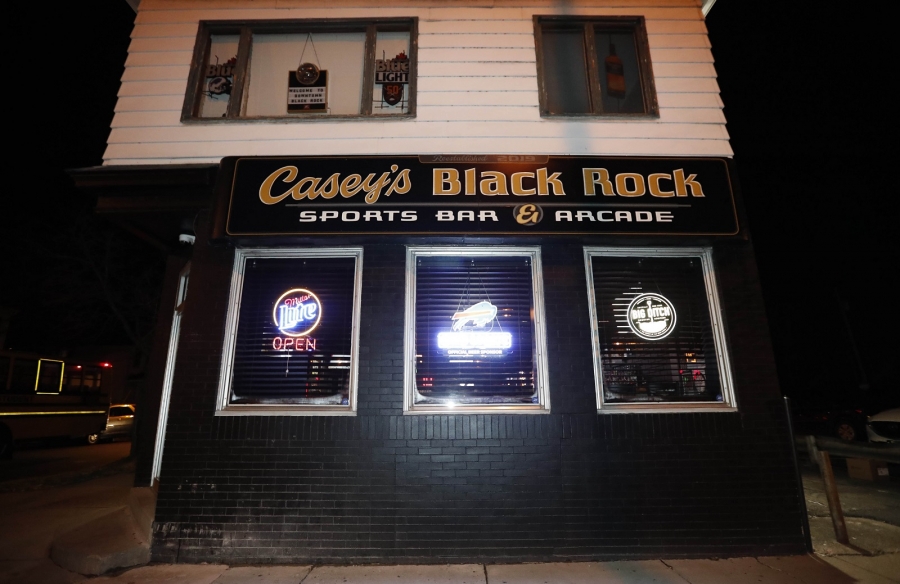