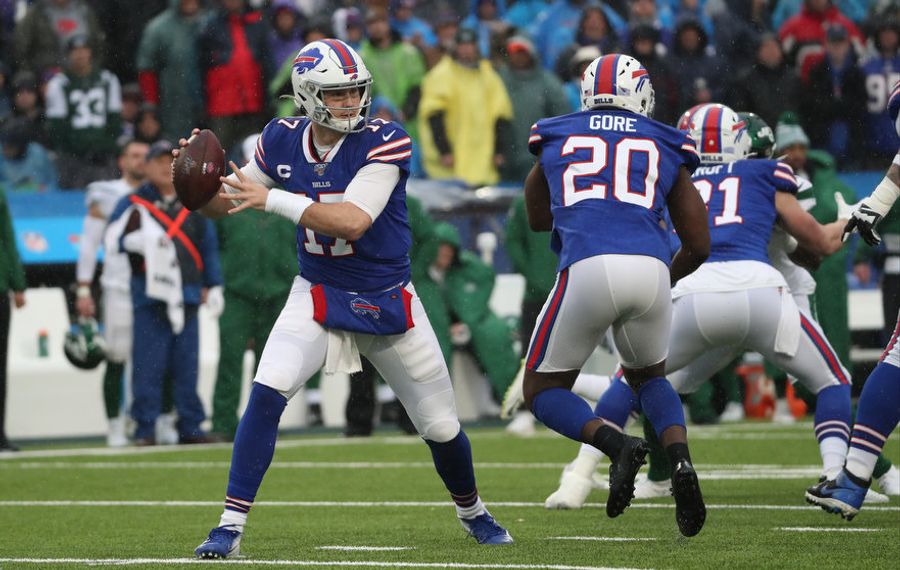 HOUSTON – Here are my five takes on the Buffalo Bills' wild-card playoff game Saturday against the Houston Texans at NRG Stadium.

1. Josh Allen plays to the standard of a franchise quarterback.

It doesn't matter that this is his first NFL playoff start or that he hasn't had two full seasons as a starter. The Bills moved up to the seventh overall pick of the 2018 draft for this very situation. They have every reason to expect they have the right person to lead them to their first playoff victory since 1995.

Now, it's time for Allen make the team's decision-makers look smart – or at least smarter than they've looked for having a quarterback who complemented a strong defense well enough to help the Bills to a 10-6 record.

The Texans' defensive struggles give Allen a good opportunity to do what he hasn't done often: generate big numbers. Houston's secondary has been hit hard with injuries, which should create openings for John Brown, Cole Beasley and Dawson Knox to make a fair amount of difference-making plays.

The Bills have done it before, sacking Watson seven times in the teams' previous encounter last season at Houston, a 20-13 Texans win. Coach Sean McDermott and defensive coordinator Leslie Frazier figure to have put together a game plan that will challenge Watson's ability to find his multiple game-breaking targets. The idea is to keep him contained and minimize throwing lanes.

The Bills have a solid enough defensive front to generate steady pressure, which they can enhance with the consistently tight coverage they've played for most of the season. The Texans have allowed 49 sacks.

It also is critical for the Bills not to allow the Texans to find the sort of success running the ball the New England Patriots found when they dominated time of possession in their AFC East championship-clinching win Dec. 22. Texans coach Bill O'Brien, a former assistant for the Pats, is likely to use a good bit of what happened in New England's game against Buffalo as a blueprint.

Perhaps the Bills won't sack Watson as often as they did in 2018, but making him uncomfortable and hurrying his throws would seem to be enough to reduce the effectiveness of the Texans' passing game.

3. Tre'Davious White does what he usually does against top receivers.

White became the Bills' lone Pro Bowl selection largely on the strength of shutting down Odell Beckham Jr. and other top receivers he faced during the regular season. DeAndre Hopkins easily ranks as the best.

White did mostly well against him a year ago. He'll need to lock him down even tighter this time.

The Texans have other receivers capable of making high-impact plays. One is Will Fuller, although he's listed as questionable with a groin injury and is expected to be a game-time decision. But their production figures to be dependent on how well White can handle Hopkins, thus forcing more targets in other directions.

Levi Wallace, the Bills' other starting cornerback, is questionable with an ankle injury, which means Kevin Johnson needs to be ready to pick up whatever slack there might be from Wallace's injury.

This should happen. The Texans' defense is soft up front. And that takes into account the return of all-everything end J.J. Watt.

Watt suffered a torn pectoral muscle in late October. It seems unrealistic to think he can be the unstoppable force he's capable of being when healthy. The Texans probably will try to limit the amount of Watt's playing time, which would seem to take away from his ability to contribute – assuming he isn't forced out of the game because of the injury.

The Bills should feed Devin Singletary as many carries as possible, and let the offensive line take control of the game by imposing its will. Frank Gore also should have more than a cursory role in the run game.

It's easy to say this in relation to Allen and those "pregame jitters" he has talked about, but it applies across the board.

The Bills match up well against the Texans. They're good enough to come away with a win that is potentially comfortable.

They just can't make matters unnecessarily difficult for themselves with silly penalties, especially on defense and specifically on third down. Extending drives can be particularly dangerous against the Texans, because they have too many offensive playmakers who can thrive with too many extra chances.

Here is what you need to know for the game Saturday.

Point spread: The Bills are a 2.5-point underdog at footballLOCKS.com.

Did you know?: The Bills gave up more than 25 points in a game only once this season, fewest in the NFL.

Next: A Bills win as well as a New England Patriots victory against the Tennessee Titans on Saturday night means Buffalo would face the Baltimore Ravens at M&T Stadium in the divisional round on Saturday, Jan. 11, at 8:15 p.m. A Bills win and a Pats loss against Tennessee means Buffalo would take on the Kansas City Chiefs at Arrowhead Stadium in the divisional round on Sunday, Jan. 12, at 3:05 p.m.

Of course, a Bills loss would be followed by players gathering at Orchard Park on Sunday morning for the dreary task of loading boxes for the offseason.