At the murder suspect's indictment hearing, Assistant District Attorney Stephen C. Earnhart read for the judge a long list of evidence he was turning over to defense attorneys. A thumb drive of video. A CD of a 911 call. The dead wife's autopsy report. Copies of grand jury subpoenas. Emails between police agencies. Old police reports.

It used to be that prosecutors had until the morning of jury selection to hand over evidence to the defense. But now, because of sweeping changes in criminal justice laws passed last spring in Albany, they must turn everything over within 15 days of a defendant’s arrest.

So the defense lawyers for Jose Ruiz Jr., accused of beating and strangling his wife in their home on the night of Dec. 9, learned what the prosecution knew at the time of his indictment last week.

And they'll get more.

“We are looking at voluminous amounts of bodycam footage,” Earnhart told Erie County Judge Kenneth Case, assuring him the District Attorney's Office will turn over the footage as soon as possible.

Turning over evidence faster is just one of the changes that police, prosecutors and judges are dealing with under the rules that took effect Wednesday.

The other major change involves bail. With some exceptions, judges will not be permitted to set monetary bail for those charged with most misdemeanors and nonviolent felonies.

More than a year and a half ago, Erie County District Attorney John Flynn told his prosecutors to stop asking for bail for most misdemeanors and low-level felonies.

So police are handing out more appearance tickets. Report technicians at police departments are scrambling to gather documents. Prosecutors are poring over video. And court personnel are figuring out ways to remind defendants to come back to court for their hearings.

And defendants? Fewer are spending the night in jail or posting monetary bail. And their defense attorneys now have access to a trove of information about their cases a lot quicker.

“We have totally changed the way criminal justice works in this county,” Flynn said.

Moving away from cash bail

Advocates for the changes say they are long overdue and will help create a fairer criminal justice system, especially for communities of color that are more heavily policed.

Bail, the money a defendant must pay to be released before a trial, is intended to make sure the defendant will come back to court. But those who pushed for the changes say it was too often used to keep people behind bars before they’re convicted – especially people who couldn't afford to post bail.

It’s a myth that people released without bail will flee and never show up for their court dates, said Andrea Ó Súilleabháin, executive director of the Partnership for the Public Good, which describes itself as a community-based think tank that builds a more just, sustainable and culturally vibrant Buffalo Niagara through research, policy development and citizen engagement.

“For a lot of people,” she said, “an arrest – and a court date – is a really serious event in your life.”

What’s more common is people who simply forget their court date or run into an issue getting to court, such as not having transportation or child care arrangements, she said.

In a Facebook Live discussion about bail reform, Orlando Dickson, a civic educator with the Partnership, talked about a study of the impact of eliminating cash bail in Washington, D.C., which did away with bail more than 20 years ago.

“Ninety-four percent of people were released without cash bail and 88% of those people returned,” he said.

But law enforcement leaders here and across the state say the new laws go too far.

James Voutour, who retired as Niagara County sheriff Tuesday, outlined the kind of suspects who could be released with just an appearance ticket: a person selling heroin to a minor, a drunken driver who hits and kills someone, a burglar.

More than 400 criminal charges are no longer on the books for which a judge can impose bail, with some exceptions, he said.

"Yes, there's a lot of work that can be done with bail reform," Voutour said. "We just want an opportunity to sit down at the table. We're the one in the streets. We go into dark alleys and catch bad guys. Give us a say in what you're going to do."

One recent morning, the bail debate played out on the second floor of Buffalo City Court. Among the cases on the docket: a 46-year-old Buffalo woman charged with stealing a purse from a woman’s cart in a grocery store. That same day she was also charged for two other incidents that happened five days earlier involving stolen credit cards. The defendant also was wanted on two bench warrants for failing to appear in court.

At her arraignment, the woman’s public defender asked City Court Judge James A.W. McLeod not to set bail, noting the charges against her were not designated as violent offenses.

To McLeod, the defendant already had demonstrated an unwillingness to return to court.

“January’s not here yet,” the judge told the public defender, setting the woman’s bail at $5,000. 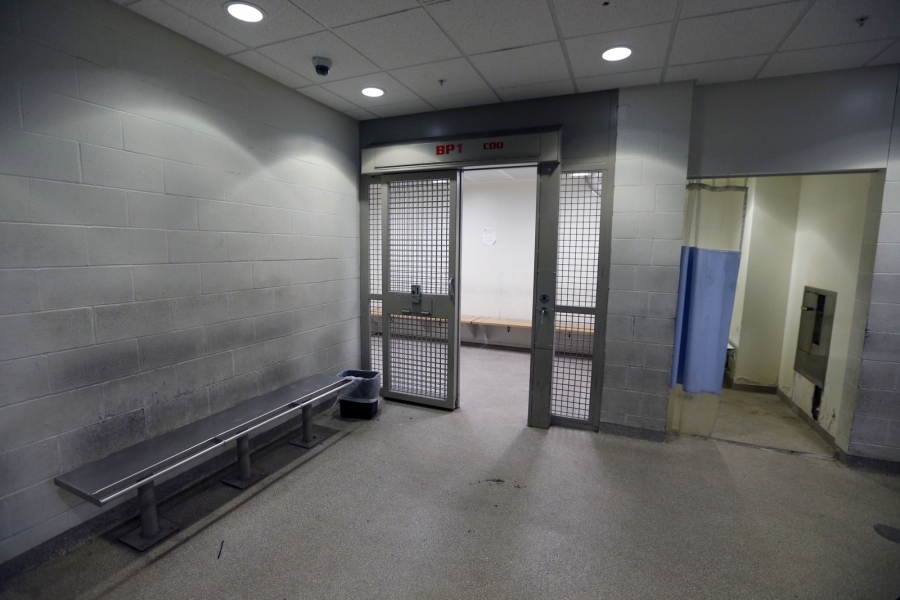 One of the group holding cells at the Buffalo Police Central Booking, at the bottom of the City Court building in downtown Buffalo. (Robert Kirkham/Buffalo News)

With Thanksgiving a little more than a week away at the time, McLeod, who retired on Christmas Eve, did not appear to be in a charitable mood that morning.

Thirty-one cases were called over about 90 minutes. A majority of cases were arraignments, and some were appearances of individuals wanted on bench warrants.

The public defender asked the judge to release at least seven of the defendants on their own recognizance, meaning no bail would be set, but McLeod did not grant any of those requests.

'No way to comply'

Sharing evidence with the defense – called discovery – within 15 days has proved to be a monumental task, Flynn said.

He said his office didn’t “play that game.”

But 15 days isn’t enough time to collect all the evidence and share it with the defense, he said.

“Fifteen days is ridiculous,” he said. “There’s no way to comply.”

The Buffalo Police Department formed a new unit of report technicians to deal with the new rules.

“Their sole task is to help the Buffalo Police Department comply with discovery requirements as a result of this new legislation,” said Capt. Jeff Rinaldo. “So their job, on every arrest, is to act as a clearinghouse for any and all required documents, photos, videos and other evidence to be presented to the DA’s Office.”

And it all needs to be done within 48 hours of the arrest.

“Additionally, we are now producing things we have never, ever had to produce before,” Rinaldo said.

That includes all video footage taken of defendants while they’re in custody – video from police body cameras, booking cameras and from homes and businesses that police obtain.

“We have 88 cameras in cellblock,” Rinaldo said.

Those cameras produce 144 DVDs worth of video each day.

“Currently, I don’t have the staff to produce all of that video,” Rinaldo said.

The department added two new positions to the Records Management Unit, and Rinaldo expects he may need as many as 10 more.

Flynn and other law enforcement leaders have expressed concerns about the kind of evidence that's now being shared. That could include names and addresses of witnesses and confidential informants.

"I don't want some witnesses identified before trial," Flynn said.

On the night of Dec. 13, Officers Jake Giarrano and Ron Ammerman sat down with Lindsey Hair, a report technician, in Central Booking to go over the details of the arrest they just made of a man in a bubble coat they spotted in the middle of Genesee Street going up to people in cars. He appeared intoxicated and had an open can of beer on him, the officers said. When they patted him down, the officers found substances they believed to be crack cocaine prepackaged in small containers in his pockets.

He was booked on multiple charges, the most serious being criminal possession of a controlled substance with the intent to sell. That’s a B felony.

Under the new bail reform laws, he would spend the night in jail but would most likely be released the next morning after his arraignment without having to post any bail.

Unlike other police departments in the region, Buffalo police bring virtually all people they arrest – even if they're only getting a desk appearance ticket – to Central Booking.

"We're here at least once a night," Giarrano said. His arrest would be one of 31 between 8 p.m. to midnight that night.

Just a week earlier, Buffalo police began implementing the new rules on appearance tickets and discovery, said Capt. Derrick R. Banaszak, who heads the Central Booking Bureau. That means those arrested in Buffalo on a misdemeanor charge or the lowest level nonviolent felony count will be brought to Central Booking to be fingerprinted, photographed and processed and then be handed a court appearance ticket and released. That generally takes an hour or two, Banaszak said. There are some exceptions.

Those charged with higher level nonviolent felonies will stay in lockup until arraignment before a City Court judge. Under most circumstances, they will be released at that point without bail.

A big change that Banaszak sees involves all of the information police officers must now provide.

The report technicians go over a long list of information and documents they need from the arresting officers. 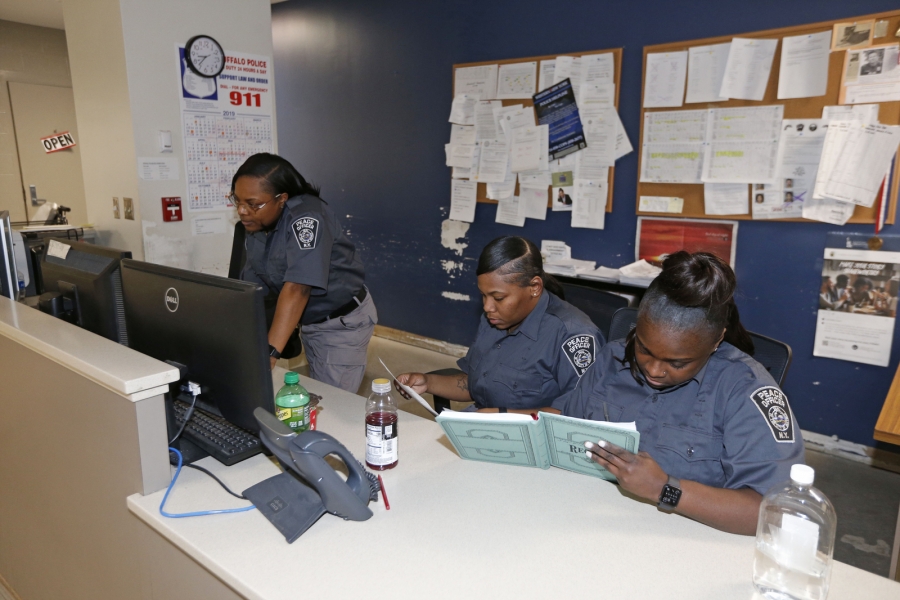 From left, Amani Martin, Brianna Craig and Deja Purdue are cellblock attendants in the female side of Buffalo Police's Central Booking in the City Court Building in downtown Buffalo. (Robert Kirkham/Buffalo News)

Flynn has been leading an effort to make sure the county complies with the new laws, and he serves on several statewide committees dealing with criminal justice.

With budget talks about to begin in Albany, Flynn said he plans to spend time pushing for amendments to the new bail and discovery rules.

He hopes A level drug felonies and crimes such as second-degree robbery and second-degree burglary are again made eligible for bail.

He also hopes for more time for prosecutors to provide information and for better ways to protect the identities and whereabouts of witnesses and confidential informants.

And he's going to ask for more money.

His new hires are costing the county $1.2 million, he said.

Those backing the new rules say the additional costs will be offset at least in part by savings from jails housing fewer people.

Flynn said that may be the case but he remains skeptical.