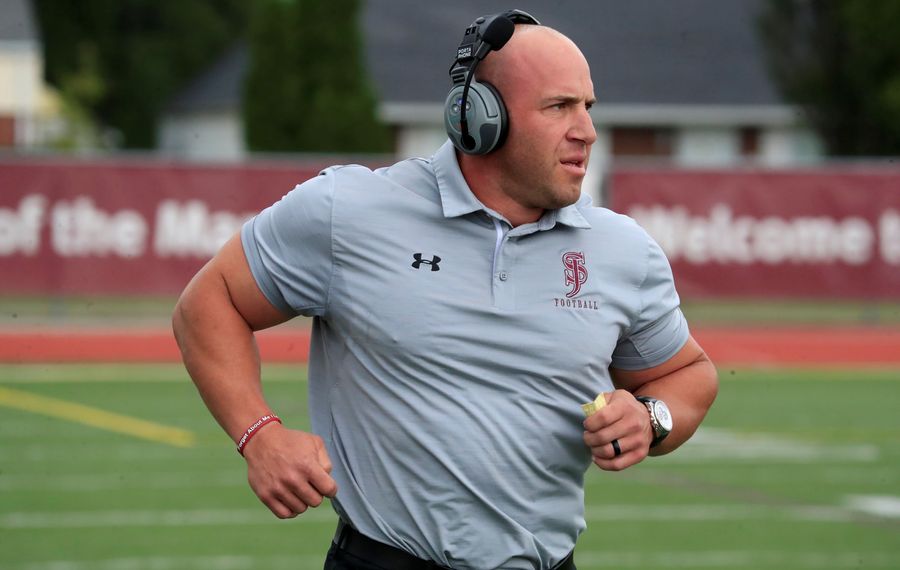 St. Joe’s is in need of a new football coach.

That’s because the school and Derek Landri have parted ways after four seasons – a tenure in which the program made noticeable improvement but not to the point where it returned to the top in the Monsignor Martin High School Athletic Association.

St. Joe’s posted a 22-21 record during Landri’s tenure but went just 1-4 during the postseason, including a loss to rival Canisius in the 2017 Monsignor Martin championship game. The Marauders last won the playoff title in 2010. This past season ended in the semifinals with a 15-6 loss to eventual state Catholic champion Canisius.

St. Joe’s Athletic Director Brian Anken said he respects Landri’s work but added sometimes it’s just time to go in a different direction. The school has begun a search for his replacement, with some prospective candidates already inquiring even though it hasn’t officially been posted as being open.

“St. Joe’s is grateful to Coach Landri for his dedication and expertise over the past four seasons,” Anken said in a statement.

The new coach will have to address the number of players in the program. Four years ago, St. Joe’s had an estimated 110 players. This past season, the Marauders had just 51 total for the junior varsity and varsity teams and 17 seniors are expected to graduate in the spring.

“I can tell you it’s a concern for everybody,” Anken said of the numbers. “I’m not going to sit and tell you you have to have a certain number to do this or that, when you look at it there are things on at both ends of the coin. We’re far better off than we were (four years ago), but there are some things that haven’t developed as we would have liked.”

Landri played seven seasons in the NFL after his college career at Notre Dame and his high school career at renowned De La Salle High School in Concord, Calif. He was a St. Joe's assistant in 2015. He took over as head coach in 2016 when Dennis Gilbert stepped down due to health reasons – guiding St. Joe’s to a 4-7 mark. That was Landri’s only losing season as the Marauders followed with campaigns of 6-5, 6-5 and 6-4. He inherited a program coming off back-to-back losing seasons.

Though Landri said more could have been done to support the school’s football athletes and his vision of building a winner, he still has fond memories of his tenure driven by the work ethic of the players. He’s proud that St. Joe’s has graduated at least three players to Division I college football. Cole Gambino signed at Stony Brook last year, Tyler Doty enrolled at the University at Buffalo in January and Jason Walker signed with Fordham during the early period in December. More players could sign in February.

“We beat McDowell (Pa.) for the first time in school history two years ago. … Canisius this year,” he said. “We’ve put more kids in college to play football the last two years than (in previous two years). If nothing else to be able to teach kids a little bit about football and to help them become great young men and help them go to college for free, I think it’s worth it.”

Landri, who is married to a Williamsville South alumnus, wants to coach next season but isn’t sure if he will be with another high school team or if it’ll be at the college or pro level.

Anken is expected to address the team Friday and said he hopes to have a coach in place by mid-February.