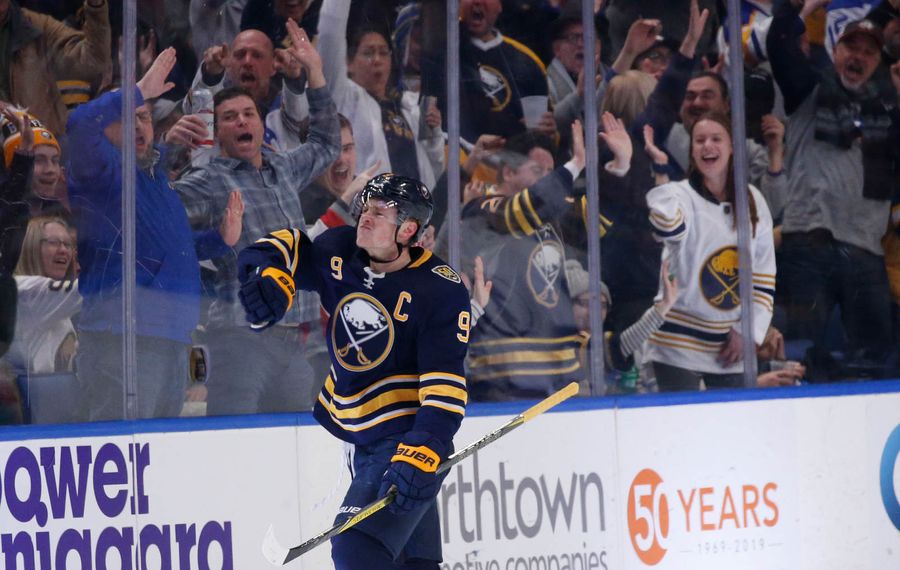 How the Buffalo Sabres respond to their 41st game could determine the outcome of their first season under coach Ralph Krueger.

The Sabres capped their first half by allowing five consecutive goals to blow a three-goal lead Tuesday night against the Tampa Bay Lightning. The 6-4 loss dropped the Sabres to 17-17-7, six points out of a playoff spot, and they are on pace for 82 points.

The season's first half included Jack Eichel's dominance, a surprising resurgence from several players who struggled under former coach Phil Housley and an injury that will likely sideline Jeff Skinner until after the All-Star break.

Krueger's ability to coax more out of players who have not performed up to expectations could help the Sabres snap their eight-year playoff drought.

"Maybe New Year’s is coming at the right time," Krueger said Tuesday night. "You’ve got an opportunity psychologically to try to cut the halfway mark and say, ‘This is where we are today and here is what we need to do second half,’ and work with the guys together the same way we always have where quickly we digest results and look at processes. Whether they’re good or bad, that’s what you have to do in the National Hockey League and that’s what we need to learn to do if we want to be a competitive team in this league."

Here is a look at how each Sabre performed during the season's first half.

Jack Eichel: The Sabres' 23-year-old captain finished the schedule's first half ranked third in the NHL with 25 goals, and his 53 points were seventh. He had a league-best 17-game point streak that ended with his upper-body injury moments before puck drop Dec. 17 in Philadelphia, and he was named to a third consecutive All-Star Game.

Marco Scandella: After posting a minus-28 rating over his first two seasons in Buffalo, Scandella has emerged as a steady presence on the blue line. Entering Tuesday, the Sabres had a 52.99 shot-differential percentage at 5-on-5 with Scandella on the ice, the second-highest mark on the team, and he's among their most trusted defensemen.

Henri Jokiharju: The 20-year-old has far exceeded anyone's expectations, at least defensively. Jokiharju has been strong in front of his own net and rarely makes mistakes in coverage. He's been used on the penalty kill and power play, in addition to helping close out tight games in the third period.

Johan Larsson: Perhaps no player benefited more from the coaching change than Larsson. He's no longer relegated to only taking defensive-zone faceoffs, and his performance without the puck has sparked an offensive resurgence. The 27-year-old has become the Sabres' second-best center, and his line has become a model for how Krueger wants the team to forecheck in the offensive zone.

Zemgus Girgensons: Like Larsson, Girgensons is showing he can contribute some offense in a checking-line role. He has surpassed his goal total from last season and is on pace for his highest point total since 2014-15.

Rasmus Ristolainen: The 25-year-old defenseman is finally starting to realize his potential. Ristolainen has four goals among 19 points with a plus-2 rating through 41 games in his seventh NHL season. More impressive, Ristolainen has been reliable in the defensive zone with puck management and coverage.

Victor Olofsson: Sabres fans had high expectations for Olofsson after he scored 30 goals in Rochester last season. However, no one could have predicted he would lead all NHL rookies in points with 34 and goals with 16 through the Sabres' first 41 games. The 24-year-old has also been strong defensively.

Linus Ullmark: Ullmark has emerged as the Sabres' No. 1 goalie, starting 10 of their last 11 games and posting a .909 save percentage in 15 starts since Nov. 24. He is on pace to appear in a career-high 50 games.

Rasmus Dahlin: Dahlin has improved his 5-on-5 play since returning from his eight-game concussion absence, and entering Tuesday, he was on pace for the best offensive season by a Sabres defensemen since Gary Galley had 54 points in 1995-96. Dahlin quarterbacks the Sabres' top power-play unit and has two goals among 21 points in 33 games.

Jake McCabe: McCabe is averaging the second-most ice time among Sabres defensemen and has a minus-2 rating in 39 games. There have been some mishaps in the defensive zone, but McCabe brings leadership as an alternate captain and often plays against the opponents' top forwards.

Sam Reinhart: Reinhart is on pace for 24 goals among 62 points and is amid a nine-game scoring drought. He's improved defensively and has been a more consistent threat on the forecheck. A strong second half could earn Reinhart a significant raise in restricted free agency this summer.

Brandon Montour: The 25-year-old is playing his fewest minutes per game since his rookie season with Anaheim in 2016-17, and he hasn't ignited the Sabres' second-power play unit in the way you would have expected. Montour has 10 points in 27 games, and he's used his elite skating to make a significant impact in the defensive zone.

Rasmus Asplund: One could argue Asplund has exceeded expectations because he's remained in the NHL since making his debut Nov. 16 against Ottawa, and he has emerged as one of the better options on the penalty kill. Asplund, though, has just one goal among three points in 23 games, and he's seen his ice time dip to less than 10 minutes in each of the past three games. It's time to wonder if he's better off having a significant role in Rochester

Curtis Lazar: The Sabres signed Lazar as a depth option, and he's filled the role admirably. The 24-year-old has brought a physical presence to the lineup and appears more comfortable playing center. It's likely he'll remain with the team through the second half.

Kyle Okposo: Expectations have changed significantly since Okposo arrived. There's no question he's not performing up to his $6 million salary. After all, he has four goals among eight points in 30 games. However, he's been effective in a checking-line role, and the Sabres' 53.29 5-on-5 shot differential with Okposo on the ice leads the team.

Did not meet expectations

Jimmy Vesey: The Sabres are still waiting for Vesey to break through. Vesey has just five goals among 12 points in 38 games. That's a far cry from the 50 goals he scored over three seasons with the New York Rangers. The Sabres traded a second-round draft pick to acquire Vesey in July, and they need more from the pending unrestricted free agent in the second half.

Colin Miller: The 27-year-old was expected to have a prominent role with the Sabres upon being acquired from Vegas in exchange for a second-round pick in the 2021 draft and a fifth-round pick in the 2022 draft. However, he's been a healthy scratch 12 times, including five times in the past eight games.

Conor Sheary: The move to Buffalo hasn't gone well for Sheary. There are games he reminds Sabres fans why Botterill acquired him from the Pittsburgh Penguins. Sheary, though, has been prone to scoring droughts throughout his career, and he has struggled to make a consistent impact with the Sabres. He has only three goals in his last 30 games, though he's played better as of late.

Evan Rodrigues: Bad luck has played a role in Rodrigues having zero goals in 24 games. Remember, he was on the wrong side of two of the best saves this season, first by Boston's Tuukka Rask and second by Ottawa's Craig Anderson. The Sabres need Rodrigues to contribute in other ways if he's not scoring, though advanced metrics indicate he's performed above his production.

Marcus Johansson: A few factors are to blame for Johansson's offensive output, or lack thereof. He was forced to play out of position for most of the first half and missed seven games with an upper-body injury in November. He seems to be gaining traction, but the Sabres need him to contribute more with and without the puck.

Jeff Skinner: The Sabres' 27-year-old winger is out for the next three to four weeks with an upper-body injury and is amid an 11-game scoring drought. He has only 11 goals among 19 points in 39 games and is unlikely to match the career-high 40 goals he scored last season. Skinner has been affected by being removed from the top power play, and he was no longer on a line with Eichel.

Casey Mittelstadt: Perhaps expectations for Mittelstadt were too high when he arrived in the NHL in March 2018. He was not ready to become a second-line center and struggled with the nuances of the positions. His lack of progress this season resulted in an assignment to Rochester, where he'll stay until he shows he's ready to be a consistent threat with the Sabres.

Zach Bogosian: Bogosian, a pending unrestricted free agent, played in 10 consecutive games upon returning from hip surgery in November, and he reportedly requested a trade upon being scratched Dec. 12 against Nashville. Bogosian has been scratched in seven of the past nine games.

Carter Hutton: The 33-year-old experienced the biggest shift in performance of any Sabre this season. He went 6-0, including back-to-back shutouts, with a .943 save percentage during his first six games, only to go 0-6-4 with a .867 save percentage in his past 10.