We finished up 2019 with a hefty precipitation surplus. About 47 inches of liquid fell in Buffalo, more than 7 inches above average. Snowfall is tabulated for the entire cold weather season, so we can’t give you a yearly snowfall total, though it is around 10 inches below average for December despite a last minute burst on Dec. 31, and 6 to 7 inches for the season thus far.

That rainfall surplus was not unique to Buffalo. A good deal of the rain fell in the soggy spring months not just here but across the Great Lakes. Green Bay is a whopping 19 inches above average; Chicago is +13 inches; Marquette, Mich., is +14 inches with lesser surpluses across nearly every Great Lakes reporting station.

This rainfall surplus didn’t begin with 2019, and is the reason Lake Ontario has been running high and producing shoreline damage. All of the Great Lakes have been running high, some at record levels. All of the Great Lakes flow downstream and have to drain out through Lake Ontario. This is why political pandering to residents with threatened lawsuits about the controlled outflow into the St. Lawrence River has no science behind it. If Lakes Superior and Huron are near record levels, those levels will have large impacts on the other three lakes.

The heavy precipitation likely is tied, at least to a limited extent, to the warming climate and increased water vapor in the atmosphere that  were predicted by climate models decades ago, though climate change is not the sole cause.

The year 2019 also brought two destructive windstorms to the area. The first occurred on Feb. 24, producing flooding and property damage from huge ice floes being driven onshore by high winds. Here is a YouTube video from CB Photography of that incredible event.

The Halloween night windstorm also wreaked havoc that had been predicted well in advance across the region, including in Canada at Port Colborne.

On Nov. 11 and Nov. 12, Western New York experienced an unusually early general snowstorm, with 11.6 inches recorded at the Buffalo Niagara International Airport. Due largely to the excess precipitation and cloud cover, only five months this year have been warmer than average, unusual in the last decade. Western New York escaped the devastating flooding that occurred last spring over much of the Midwest and Plains. We also dodged the dangerously oppressive heat wave at the beginning of October over parts of the mid-Atlantic and Southeast states.

Prior to this decade, most meteorologists and many climate scientists were reluctant to tie individual extreme weather events to the warming climate. In recent years, more and more evidence-based, peer-reviewed papers have been published finding the climate signal in many extreme events. The stalling and resulting devastating and deadly flood damage of Hurricanes Harvey, Florence and Dorian were well predicted by tropical and conventional weather models because these models now include the climatology of weakened upper level winds linked to the extraordinary warming in the arctic. The warmth in the arctic, which is proceeding at twice the rate of mean global warming, lessens the temperature contrast between the polar latitudes and mid-latitudes. The smaller contrast weakens the jet stream. With weak upper winds occurring more often come more frequent “blocking” patterns in which systems stall or slow to a crawl, as was the case with these three tropical cyclones. Now it has become more likely that even after the storm winds have died down, stalled tropical storms and depressions will produce disastrous inland flooding more often.

These established links are a part of a new subdiscipline in climate science, called attribution science. The attribution between warming and increased coastal flooding is undeniable. Melting glaciers and freshwater ice on Greenland and Antarctica contribute to rising sea levels. In addition, the warming of the oceans causes water to expand in volume, increasing the rate of rise in many parts of the globe.

Of great concern is the acceleration in the melting of freshwater ice, now far beyond melt rates earlier in the century. “Sunny day flooding” is becoming more common in Florida and many East Coast locations at high astronomical tide with no tropical storms involved. The coastal flood plains and islands around the world are becoming more threatened at a faster pace.

Confidence is extremely high human activity underlies the warming. Past glacial advances and retreats in the Earth’s history have been linked to predictable eccentricities in Earth’s orbit over many tens of thousands of years, as well as changes in the axial tilt of the planet, along with high carbon dioxide levels from natural sources. Those sources are not now a primary greenhouse factor. CO2 levels are now known to be at their highest level in at least 650,000 years, demonstrably due to combustion of fossil fuels since the industrial revolution. 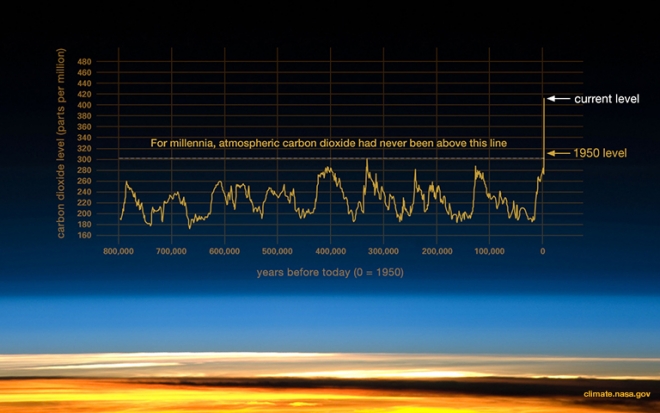 Attribution science, now accepted by the National Academy of Sciences, will continue to grow in the new decade without stagnation. Twenty-five years ago, prevailing opinion was that global warming would cause more hurricanes. Many studies later based on both theory and real-time data show the number of hurricanes will probably not increase. But global warming has led to a greater likelihood of more intense to extreme hurricanes, such as Dorian.

While denialists still cling to the idea this warming is really no different from past warming periods, we know that idea is fundamentally wrong. When any one of the many climate models are initialized with carbon dioxide levels found around the year 1900, along with all natural warming mechanisms cranked up, those models show the world would have been cooling since that time. If there were ever much doubt, this last decade in research and applied science has proven the vast majority of the ongoing warming is directly tied to human activity.

The previous link to a NASA feature is a decade old. Just to add a little more evidence, in this last decade it has been determined solar input not only isn’t increasing, it has been slightly decreasing on a small scale for some time. This skepticalscience.com graphic is based on NASA data.

I have a Facebook colleague who used to sign all his posts, steeped in denial, with “It’s the SUN, stupid.” He has since quietly deleted the signature.

As a new decade begins, it’s true we are steeped in pessimistic news concerning the warming climate. Despite that context, I took a lesson, aided by Penn State climate scientist and meteorologist Michael Mann last summer.

Climate crisis is upon us, but 'doomism' doesn't help