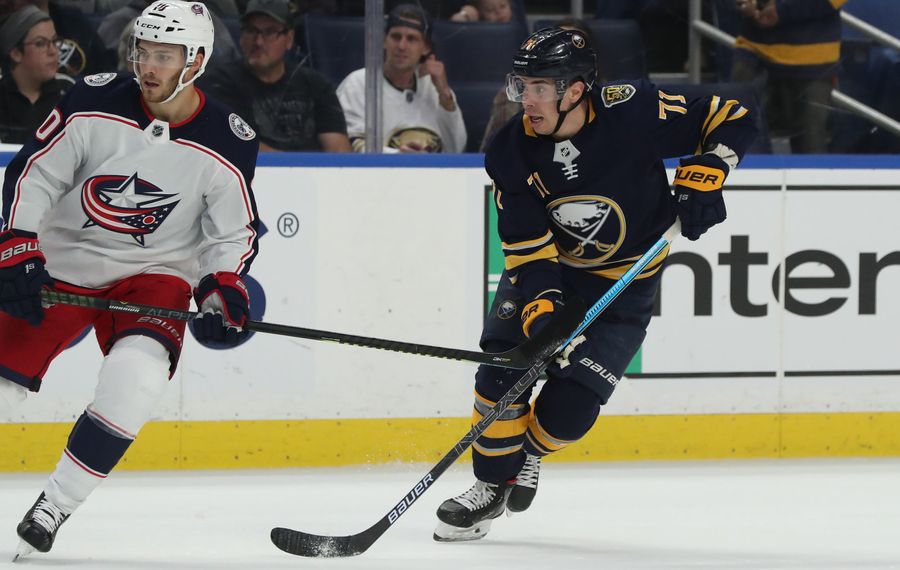 Evan Rodrigues did not deny he wants a fresh start after spending four-plus seasons with the Buffalo Sabres. However, the 26-year-old forward acknowledged to reporters Wednesday that he's unhappy with his role under coach Ralph Krueger and wants more ice time.

"I’m a hockey player who wants to play hockey," Rodrigues said outside the Sabres' dressing room in KeyBank Center. "I think that’s pretty much, anyone out there will tell you the same thing. It’s a job, it’s a career. Just want to play hockey."

Rodrigues, a pending restricted free agent making $2 million, was scratched Tuesday for the 17th time this season. Two hours before puck drop against the Tampa Bay Lightning, TSN's Darren Dreger reported that Rodrigues, like defenseman Zach Bogosian, expressed a desire to be traded by the Sabres.

Krueger declined to say whether he was frustrated by another report of a player wanting out, but he made his stance clear.

Rodrigues has zero goals in 24 games and only one in 51 games dating back to last season. He was scratched Tuesday in favor of forward Dalton Smith, who played only 1:26 and received a two-minute penalty for roughing. Rodrigues played less than 10 minutes in six of the Sabres' previous 10 games.

Rodrigues is averaging a career-low 10:42 of ice time while recording three assists with a minus-5.

"Yeah, I’m not going to say I’m happy with that," Rodrigues said of his production. "I expect more from myself. Just getting those chances and playing, it will come. I don’t doubt myself, but obviously it’s not the result I wanted."

His role is different than the one he had last season under former Sabres coach Phil Housley.

Rodrigues, who signed with the Sabres as an undrafted free agent in April 2015, set career highs in goals (9), assists (20) and points (29) while averaging 15:49 of ice time. He emerged as their second-best option at center and was a key cog on the team’s penalty kill while solidifying himself as a full-time NHL player. The performance resulted in him being awarded a one-year, $2 million contract through arbitration in July.

However, Rodrigues struggled in his first training camp under Krueger and was a healthy scratch in seven of the Sabres’ first 11 games. He has played only 12:53 on the power play this season and remained in a bottom-six role when the Sabres were in need of a second-line center. While Rodrigues denied that playing in a new system slowed his progress, Krueger views the situation differently.

"What happens is the competition in the group has been hard and some players will profit from it and some of them will struggle," Krueger said of Rodrigues. "It’s also the principles and concepts we’re looking for. I told you early on that some players who play a different way, they’ll have to give up some of themselves to become part of a group dynamic, which gives us a chance to win every night here. If all five guys on the ice are connected then we have a chance and if we’re not we won’t.

"What would happen is often players will give up or lose on the offensive side, and it’s possible with him that’s the pathway that’s been difficult for him. Not for everybody does that come as easy, and he just needs to continue to work on his game, and we’ll make decisions on lineup for lineup and look at the facts. Again, we’ll deal with that inside and internally with what the truth is of the situation. Not everybody evolves at the same pace within the concepts or principles of a team."

This is the third time in less than 12 months a Sabre has reportedly requested a trade. Defenseman Nathan Beaulieu did so before he was dealt to the Winnipeg Jets shortly before the deadline last February, and Bogosian allegedly made his intentions known after being a healthy scratch Dec. 12. Bogosian has been scratched in seven of the Sabres' past nine games.

Rodrigues recorded a season-high six shots on goal with one assist in 13:54 during a 3-1 loss in Ottawa on Dec. 23, only to play 6:29 against the Boston Bruins four days later.

"I think you always believe in yourself and always have that confidence," Rodrigues said. "Yeah, a game like that kind of gives you a little boost, and it’s frustrating for myself to not see myself do that consistently. That’s kind of what I see myself as and what I want to be doing. I just want to be playing and getting those chances."

Rather than practicing or dissecting their latest loss, the Sabres gathered Wednesday morning for a team meeting where Krueger summarized their first 41 games, and they went over what’s possible during the season’s second half. He also wanted to evaluate how they were affected by having to play 21 games in 39 days.

The Sabres host the Edmonton Oilers in KeyBank Center on Thursday night to begin a stretch of 18 games in 46 days. Krueger also spoke about how the Sabres are forming the habits necessary to be consistent, and he explained why their play has started to slip recently.

“What’s happening is the mental fatigue of sustaining those habits over and over and over again for 60 minutes, it’s still not there,” Krueger said. “It’s still not there. We still don’t have the mental wherewithal to stick with those habits. As soon as we are plus-35 seconds in a shift, as soon as we’re four games in seven days and it’s tough time, we have individual breakdowns still in those situations. And those will go away because the hearts are in the right place.”

Krueger spoke to the media for approximately 15 minutes following the team meeting in what could be called a state-of-the-Sabres address. Though Krueger wanted his players to not dwell on the negative aspects of the 6-4 loss to Tampa Bay, he emphasized the importance of learning from what went wrong.

“What winners are able to do is bring themselves into constructive processes quickly,” Krueger said. “That’s what processing pain in life is all about. So, if you stick with the pain and you stick with the process too long, it will eat you up. There’s no room in this National Hockey League to feel sorry for yourself. … So, pain is there to test you and for you to learn and grow from is you use it properly. Otherwise, all it does is eat you up and turn you into a loser. So, it’s making those winning decisions is what we need to learn to do better.”