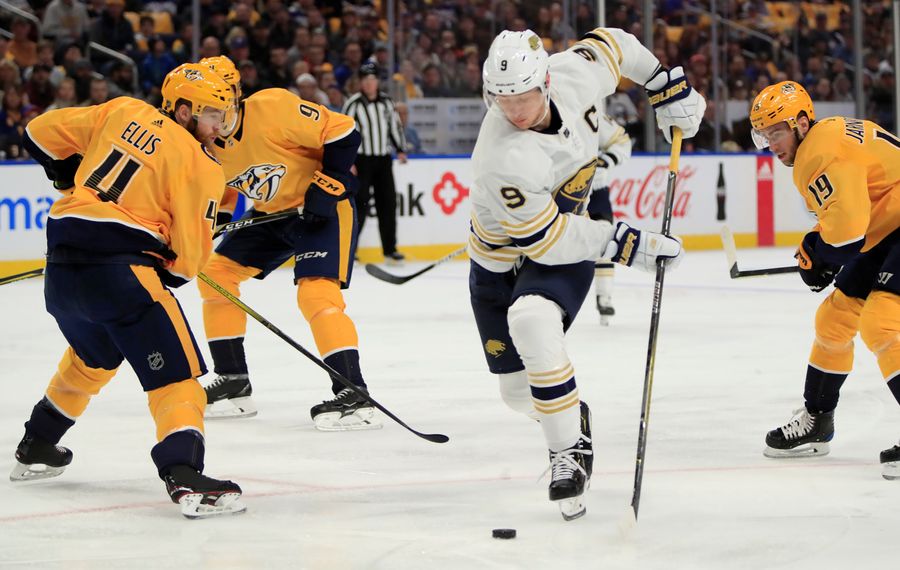 When the 2015 NHL Draft started to take shape, observers around the National Hockey League knew that Connor McDavid and Jack Eichel would forever be linked. McDavid, taken first overall by Edmonton, was billed as hockey’s next superstar – a generational talent in the same vein as Sidney Crosby or Alexander Ovechkin.

Eichel was taken second overall by Buffalo. Eichel, a talent worthy of being first overall, was available at the time when Buffalo had the No. 2 pick by random chance – the random chance of McDavid being draft eligible the same year as Eichel and the random chance of the lottery. But neither Edmonton nor Buffalo would complain.

With a bona fide superstar down the middle of the lineup for the foreseeable future, the teams and their fans expected playoff hockey and perennial Stanley Cup aspirations would return to two vintage hockey markets.

But hockey remains a team sport – you can have weapons like McDavid and Eichel in your lineup, but asking them to unilaterally pull a roster to a postseason finish line is the tallest of orders. And that’s why Oilers and Sabres fans have been so frustrated for so long.

Since entering the league (and prorating the expansion team in Vegas), these two franchises are 24th and 31st respectively in the win-loss column.

It is mind-boggling how difficult it has been for these organizations to build around their stars. And it’s on full display again in the 2019-20 season, where after hot October starts, the Oilers and Sabres have emphatically regressed to the middle of the pack.

McDavid is having a Hart Trophy caliber season, and Eichel isn’t far behind. But with little to no help around them, it’s starting to feel like nothing will change. The two superstars will be on the ice together Thursday in KeyBank Center for the Oilers' annual visit.

Edmonton did little to improve the roster around McDavid this season – mostly because of terrible cap management under the prior regime, but some because of new General Manager Ken Holland’s “wait and see” approach. Buffalo was the opposite: The Sabres targeted the trade market and free agency to improve at both the forward and defensive positions, bringing in a litany of new names.

The forward position specifically was supposed to be an upgrade: Marcus Johansson, Conor Sheary and Jimmy Vesey were supposed to give Buffalo more juice in the middle six of their lineup, as were new faces Victor Olofsson and Rasmus Asplund. Olofsson has produced admirably. The rest of the group? Not so much.

To understand just how top heavy these teams are, I plotted out each team’s scoring contributions from its forward group as a percentage of total goals scored by forwards this season. Skaters of similar usage are measured against one another, so the most commonly used forward on Buffalo’s roster (Eichel) is compared to the most commonly used forward for the other 30 teams, and so on. 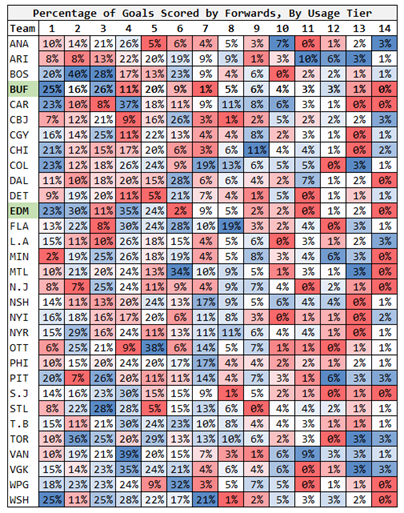 For the Sabres, you can see that the middle six is crushing this team. Outside of Jeff Skinner – who curiously is playing the fifth-most minutes on the team and is now out for three to four weeks – the Sabres' middle six pales woefully in comparison to the rest of the league. The group of Marcus Johansson, Johan Larsson, Vladimir Sobotka, Jimmy Vesey, Zemgus Girgensons, Conor Sheary and Casey Mittelstadt have a total of 33 goals in more than 3,500 minutes. Eichel and Sam Reinhart alone, the team’s top two forwards by usage, have 36 goals in less than half the time.

In Edmonton, the issues are really with any forward who hasn’t played with one or both of McDavid or Leon Draisaitl this season. The Oilers have the least productive bottom six in the league – forwards six through 14 by usage total 24 goals, which would mean four forwards (David Pastrnak, Auston Matthews, Eichel and McDavid) have met or exceeded Edmonton’s entire depth scoring.

When you are thinking about the resumes put together by the likes of Eichel or McDavid through the first few years of their careers, it’s important to keep this context in mind.

Both organizations have failed to build around their stars, and at least for this season, it’s hard to see where help will come from.