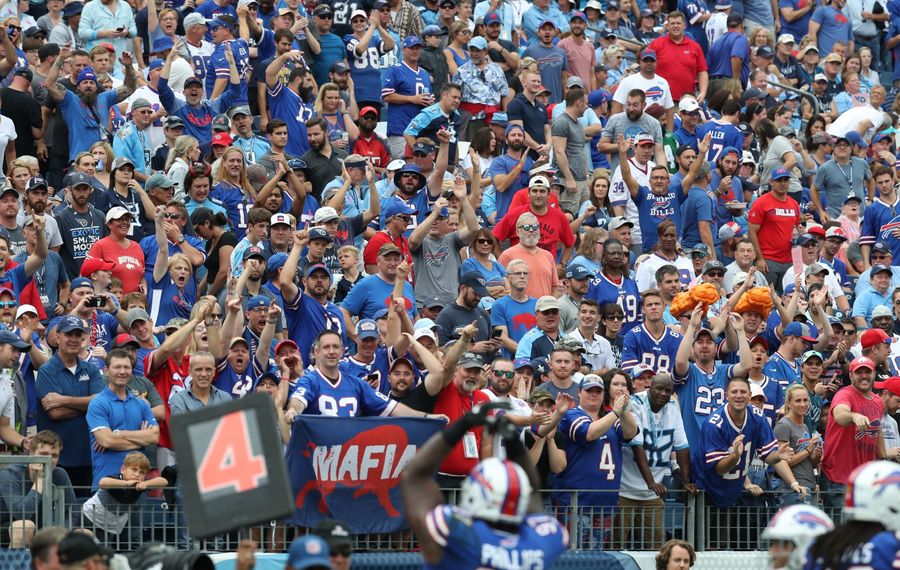 The day after the Buffalo Bills lost to the New England Patriots more than a week ago, North Tonawanda resident Dave Stone hopped on his computer and spent roughly 10 hours plotting the cheapest, fastest route to Houston.

As a season ticket holder since 1984 who made it to all four Super Bowls and the Jacksonville playoff game two years ago, he wasn't going to miss this one.

"It's huge," said Stone, after explaining the travel logistics that would take him through two countries and four states.

"I feel like I have to be there to watch," said Krista Prentice, a 30-year-old pharmacist from Amherst. "How could you not? It's such an important game."

Bills coach Sean McDermott and some of his players seem regularly surprised and impressed by how many fans will travel to see the team away from home, but they are looking forward to the support.

"I didn’t know how many Bills fans were traveling to Houston, but it’s going to be dope," said cornerback Taron Johnson. "Hopefully, we can make it close to, like, a home game." 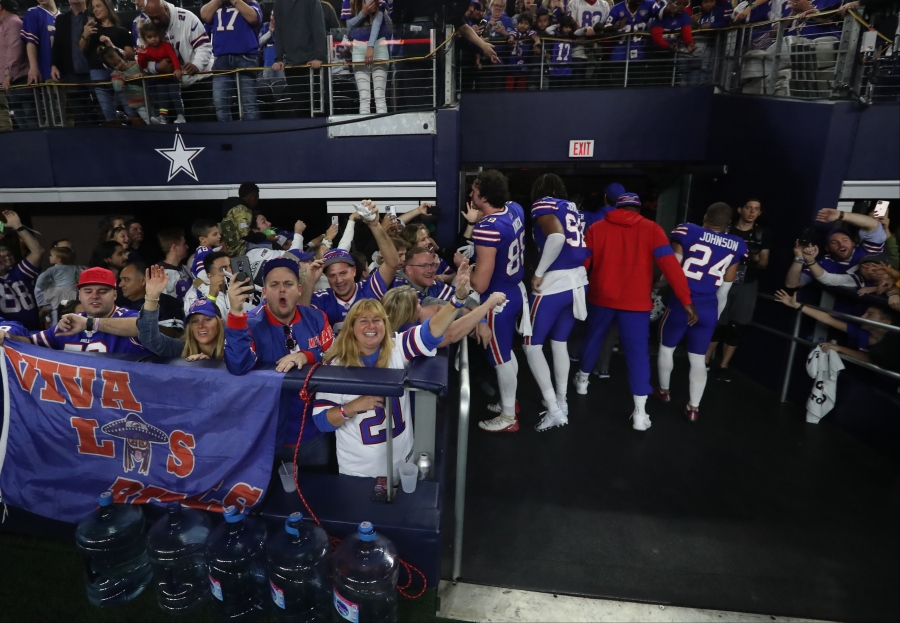 There were plenty of Bills fans helping to cheer on their team on Thanksgiving Day when the Bills beat the Cowboys 26-15 at AT&T Stadium in Arlington, Texas. (James P. McCoy/Buffalo News)

"Houston, you have a problem"

Prentice will be meeting up with her two sisters in Houston for the game.

Like so many other fans, they gambled on the Bills' chances of a matchup with the Texans and bought airline tickets to Houston before the game was official. They almost bought tickets to Kansas City, too, to be safe, but backed off. Prentice had airline reward points to cover part of her ticket, and ended up paying about $180 each way. Southwest is now charging more than $1,000 round trip for the same flight.

Prentice has Friday off, so she'll fly earlier than her sister Jamie Prentice, who is also from Amherst and will leave later that day. Their sister Lauren Prentice, who lives in St. Petersburg, Fla., will meet them in Texas. The sisters are meeting another five friends there, and the group will share an Airbnb outside Houston.

They have plans to attend a block party organized by Houston Bills Backers Friday, then tailgate at the game Saturday, Krista Prentice said. She knows of about 20 other friends who also will be attending the game separately and expects to find even more people she knows once she gets there.

She is packing her Zubaz leggings, her luckiest away-game Bills shirt, and drink koozies she'll customize to say "Houston, you have a problem." She has tickets in the 100-level next to the Bills tunnel.

As important as it is for the Prentice sisters to experience the game together, they feel their presence means just as much to the team, Krista Prentice said.

"I think it just creates a good atmosphere for them to play in and hopefully get us the win," she said.

"Just soaking it all in"

Despite being a season ticket holder for years, Michael Mumbach has never experienced a Bills playoff game in person. He vowed that if the Bills made it to the playoffs this time, he was going to be there to see it firsthand, no matter what.

The 37-year-old from Orchard Park grew up during the Bills' heyday. As an 8-year-old, he thought it was normal for a fan's hometown team to go to the Super Bowl three times.

"They were amazing my entire childhood so I kind of took it for granted," Mumbach said. "Until they stopped going."

After the New England game, he booked one-way flights to Houston for himself and his wife, bought game tickets, booked a hotel, and then waited for the game to be scheduled before booking return flights home. If the Bills ended up in the playoffs against Kansas City – which he didn't expect – he figured he wouldn't be out too much.

There would be no fees if he had to cancel the hotel reservation, and he expected the football tickets would be easy to re-sell since they were for the playoffs. He would just have to pay the a penalty to transfer the ticket to Kansas City – something he was undoubtedly prepared to do.

There was just one hitch: Mumbach had trouble finding a babysitter. So the couple will fly in Saturday morning and out Sunday afternoon. It's going to be a tight schedule, he said, but he's OK with that. 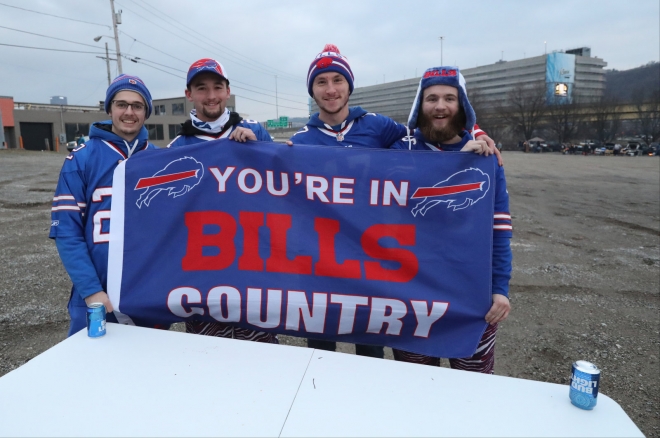 Bills fans made their way to the game against the Pittsburgh Steelers at Heinz Field in Pittsburgh on Sunday, Dec. 15, 2019. (James P. McCoy/Buffalo News)

McDermott and some of the players got a taste of how far Bills fans are willing to go when the Bills traveled to Nashville to beat the Titans in October. He opened up his postgame news conference by acknowledging the fans first.

"Unbelievable," McDermott said. "I don’t think I have ever seen it like that at an away game. Fans, great job. As we pulled in on the bus as I looked to my left, a couple of parking lots away from here, and it was all Bills fans and it was awesome. I really appreciate that. The players felt it, the staff felt it.”

Houston is even farther than Nashville, but it's also a playoff game, not a regular season game. So the Bills Mafia are likely to be out in force.

The Houston Bills Backers Facebook group already has more than 1,900 members, a designated Bills bar location, a map of tailgate locations and numerous posts about where out-of-towners are staying and how they can efficiently track down their favorite tailgate foods.

Stone, 66, drew on his background as a retired truck driver when it came to plotting his route to the game.

After the loss to the Patriots, he saw the cheapest flights from Buffalo to Houston were more than $400 and included one or two stops. So he began searching for flights out of Pittsburgh, then Cleveland.

He hit the jackpot in Detroit – a one-way, nonstop ticket on Spirit Airlines for $82. Sure it's a 4½ hour drive to get there, but he's cutting out the layovers and splitting a one-way rental car with his nephew and his nephew's two sons. So he figured it was all good.

He found an Airbnb with two bedrooms in Houston for $100 a night and got quite reasonably priced aftermarket tickets to NRG Stadium. Houston fans must not care as much about their team as Bills fans, he said.

Stone has been a Bills season ticket holder since 1984. He remembered when the Bills made it to the playoffs in Jacksonville two years ago. Bills-designated bars and parking lots were overrun by Bills fans hours before they were even supposed to open. Lines were out the door. Cars were stacking up on main roads.

"It's huge," he said of the opportunity to see the Bills' second playoff game in three years.

Flying back through Detroit would have been much more expensive than the flight down. So after the game, he and his contingent are taking a dirt cheap nonstop flight to Orlando on Sunday, spending the night to enjoy the warmer weather, then flying Allegiant nonstop to Niagara Falls.

His combined airfare total down and back: About $250.

It pays to be savvy, he said, especially if you have even bigger playoff dreams.

"You know what I’m really looking at?" Stone said. "Miami."

The Super Bowl might be a long shot, he said, but it could happen. And he'll be ready.