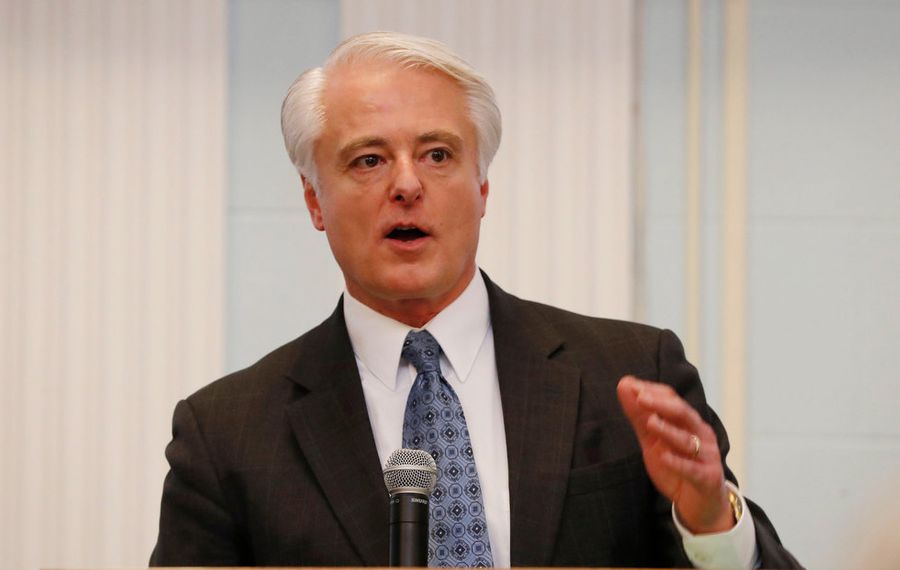 The 60-year-old Democrat also urged city officials and residents to work together to make Niagara Falls a more livable and prosperous city.

"Today marks a new beginning," Restaino said at the start of an 8-minute address inside a packed City Council Chambers.

"Now is not the time to be complacent or malignant, to continually tear each other down without offering viable alternatives, or to simply seek influence without responsibility," Restaino said shortly after taking the oath of office.

Restaino, who beat three other candidates to win the mayoral election in November, was sworn in as Niagara Falls' 31st mayor by his daughter, City Court Judge Danielle Restaino.

Dyster's predecessor, Vincent Anello, was under investigation for most of his term by federal authorities on allegations of corruption and went to prison for pension fraud after leaving office. 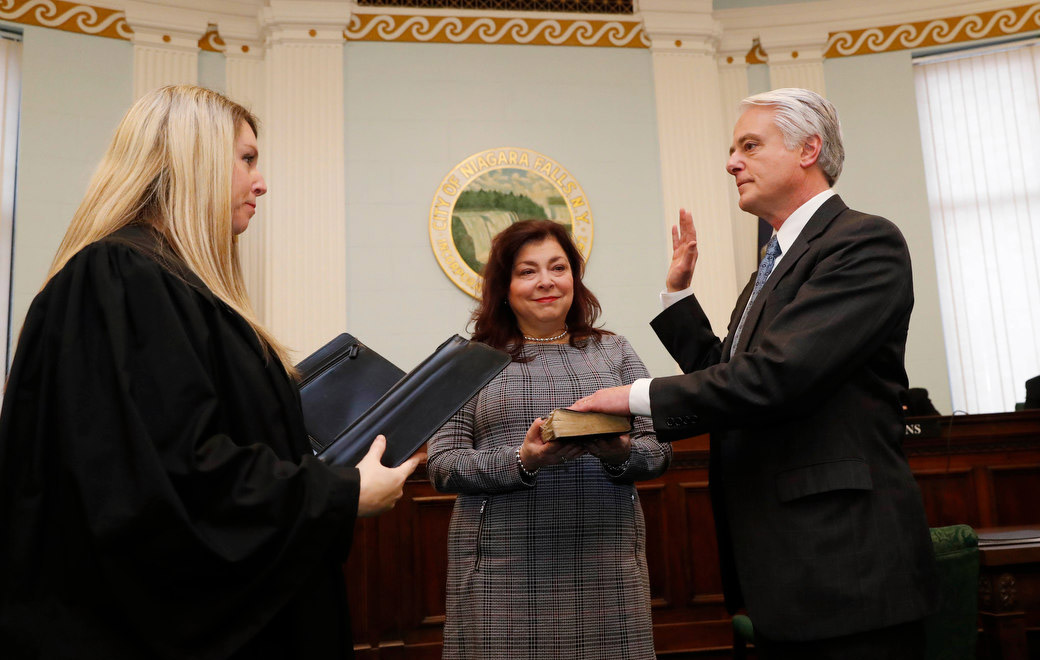 Robert M. Restaino takes the oath of office as mayor of Niagara Falls in City Council Chambers at Niagara Falls City Hall on Wednesday, Jan. 1, 2020. He was sworn in by daughter and City Court Judge Danielle Restaino, left, with his wife Diana, center, holding a bible. (Sharon Cantillon/Buffalo News)

The new mayor holds a bachelor's degree from Niagara University and a law degree from the University at Buffalo School of Law, and has held a number of public-sector positions.

Restaino has been an assistant attorney with the Niagara County Department of Social Services, a special assistant in the county examining Medicare fraud, a city court judge, assistant public defender and school board president.

The big blemish on Restaino's resume was his removal as city court judge in 2007. That occurred after he locked up all 46 people in his courtroom two years earlier, when a cellphone went off and no one claimed responsibility. Restaino's ouster was upheld by the Court of Appeals in 2008.

Lt. Gov. Kathy Hochul referred to Restaino's government service when she said he was well-positioned to lead Niagara Falls.

"You are ready for this," Hochul said. "You have been primed for this position your entire life. And this city is ready for your leadership as well."

"We need to approach private industry in an open and inclusive way," Restaino said. "I truly believe we live in one of the most beautiful cities in the country, and it has so much to offer. We need to do a better job of communicating that to businesses and investors."

Creating new jobs will expand the city's tax base, cultivate new revenue sources and strengthen communities, including those most hard hit, Restaino said.

"It will give people a chance to pull themselves out of poverty, which is at the root of so many challenges that Niagara Falls faces," he said. "Combating poverty through job creation is how we address the crime that we see in the streets and read about in the news.

"The Niagara Falls Police Department does good work every day for us, but that department alone cannot eradicate the crime we see," he said. "Changing the nature of this community by giving our residents hope and opportunity to build and sustain a livelihood is how we decrease criminal activity and change the reputation of our city, and how we are perceived."

Building alliances with surrounding local governments and county officials will be another priority of his administration, he said.

"We need to accept the fact that we are part of a larger network of cities, towns and villages," Restaino said. "While we may not all have the same needs or agree all of the time, there are a number of areas where we can find common ground and strike agreements that will benefit residents in a cost-effective manner."

Restaino said he also wants to see more transparency by city employees, saying there was a lack of mutual respect that needs to be rebuilt with city residents.

"There needs to be a renewed commitment by those who hold public-sector positions of service to community," Restaino said. "Central to that commitment is letting the people of this city know what goes on in City Hall and its adjacent departments."