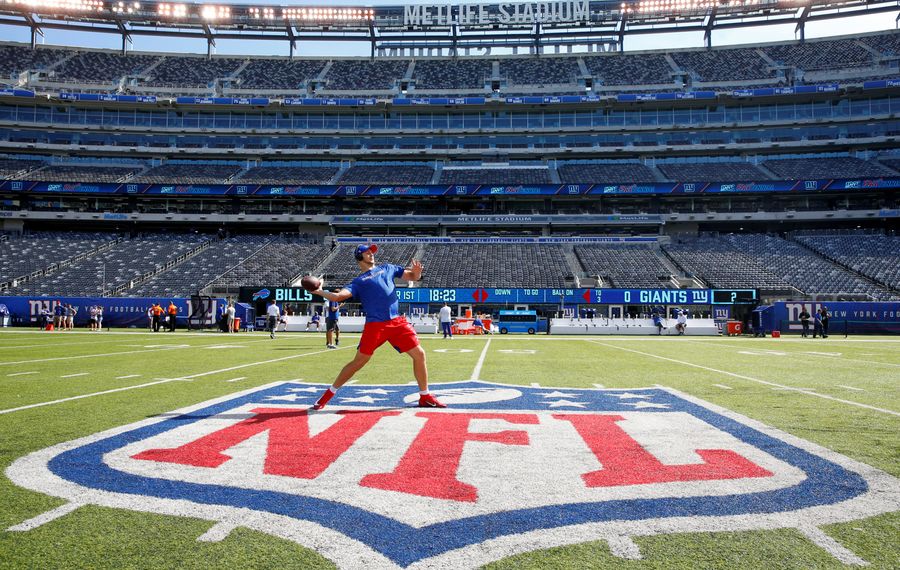 The Buffalo Bills' 2019 regular season mercifully ended Sunday with a meaningless 13-6 loss to the New Jersey Jets. The game did not count, outside of a countdown to next weekend.

Josh Allen only played two series, but he looks clearly better than good friend Sam Darnold, selected a few slots ahead in the draft. Matt Barkley was Matt Barkley and not the aberration that was the 2018 Jets game. He is not the guy many Bills fans thought he was. Extremely limited arm and mobility is a double whammy in today’s NFL.

Duke Williams repeatedly flashed why he should be active despite a drop, a poor down-and-distance pattern/awareness, and an excessive celebration that cost a timeout. Robert Foster looked lost all afternoon in a lost season and could be replaced by Duke in the playoffs.

The Bills ended the season with only one player recording a receiving touchdown in both 2018 and 2019: left tackle Dion Dawkins.

Isaiah McKenzie remained dynamic on jet sweeps and practically stealth against the Jets the rest of his time. Ageless Frank Gore reminded us he is one tough OG. T.J. Yeldon showed some sparkle and juice in reserve.

Seventh rounder tight end Tommy Sweeney outplayed high-priced, oft-injured free agent Tyler Kroft — despite an inexcusable late gaffe by not stepping out of bounds, which caused an inexcusable spike by Barkley, which led to an inexcusable FG decision by Sean McDermott. Brian Daboll remains a mystery as a play caller and cause for many in the Bills Mafia to want to go to war with him.

On defense, Ed Oliver is developing nicely. Trent Murphy had his best game as a Bill. The bend but don’t break approach applied to all reserves, as well as a few notable and blatant missed tackles, including a late pathetic effort by usually reliable Jordan Phillips. They played and hit hard and only gave up 13 points.

As a team, the Bills only gave up 25 points once all year.

Le’Veon Bell never got loose the whole game or campaign. Adam “Basket” Gase again appeared wild-eyed and witless, and we should all feel fortunate this holiday gift-giving season that he will likely return as Jet coach next one.

Injuries became a factor as the Bills lost Levi Wallace on a seemingly harmless interception, and Ty Nsekhe’s ankle turned the wrong way again. The Bills cannot complain much, however; they have been extremely blessed.

The announcers, referees and elements were horrific for both teams, and opposing kickers continued their inexplicable, pitiful performance, especially in gangrene uniforms.

Lorenzo Alexander’s daughter sang the national anthem, a fitting tribute to an unsung career for her dad, at potentially his last Bills home game.

The embodiment of the culture change designed and instituted by McDermott and General Manager Brandon Beane, Lorax was taken out to a standing ovation on a nice touch by the Bills head cheerleader, er, coach.

But Week 17 of the 2019 NFL season was most notable for being pointless in the good way. The Bills were locked into the No. 5 seed, and everything about last Sunday was about next Saturday in Houston.

The different Bills teams that have been appearing at various times during the year will get a chance at showing and, perhaps, shocking the football world.

Allen has his chance to show off his remarkable skill set, physicality and intangibles. Both previous nationally televised games, against Dallas and Pittsburgh, were wins and solid performances under the brightest of lights on the biggest stage.

Buffalo has become Allentown and he is us, even wearing a retro Braves uniform.

The defense is peaking and should be ready, even sans Wallace if need be.

Bill O’Brien could and should be outcoached. Deshaun Watson is a heck of a player with one of the top 2-3 WR in the game in DeAndre Hopkins, but this is a very winnable game.

Stages one, two and three of the Bills revival plan were methodically put in place when McDermott and Beane took over in 2017 and have already been accomplished.

One: Changing a losing culture into a winning one. Two: acquiring a franchise QB who can take them to the promised land. And three: reaching the playoffs where anything can happen.

The fourth, fifth, and sixth stages — four: winning in the playoffs; five: fielding a consistent contender for years to come; and finally, six: winning the Super Bowl — all seem to be on the right trajectory at least, and maybe even on the horizon in the next two or three years.

The New Era Bills will be on display for the whole football world to see at 4:35 p.m. in NRG Stadium. The Bills are right on schedule and the Texans are ripe for a good ol’ Texas whoopin.’

Houston, we have a problem.