Facing heated criticism of its proposed five-story residential apartment building on the edge of the Fruit Belt, Symphony Property Management is coming back with a series of revisions to its Michigan Avenue project.

Among the biggest changes is a reduction in size to four stories, dropping the height by 11 feet, without losing any parking.

The developer and architects worked to revise the building to add more glass to the facade and incorporate more of the parking in the planned underground garage instead of above ground, where it pushed the height up.

That makes the building less imposing from the street, which was one of the neighborhood complaints.

"The new design is better sized to blend with the character of the neighborhood and improve the transition from medical campus to residential neighborhood," said project spokesman Adam Croglia.

Symphony is also working to line up enough additional parking off site so every apartment has at least one space. That's up from 74 garage spaces in the prior plan, and exceeds the recommendations of an updated transportation demand management study.

The developer is committing to "prohibit residents from parking on Fruit Belt neighborhood streets at all times," Croglia said, even opting-out of the city's street parking permit program that is available to Fruit Belt residents.

This is the previous version of The Lawrence, a proposed apartment complex on Michigan Avenue and Maple Street on the edge of the Fruit Belt. (Courtesy of Symphony Property Management)

Croglia said the changes are being implemented based on input from the community, and he said the developer is "grateful for our working relationship with the community and the City of Buffalo."

But the true test will come when the changes – which have now been submitted to the city – come before the Buffalo Planning Board and Buffalo Zoning Board of Appeals next month.

The developer, led by Timothy LeBoeuf, initially proposed a five-story complex across Michigan from Roswell Park Comprehensive Cancer Center, in the first major incursion into the historic neighborhood of streets named for fruit trees. Plans for the $25 million project – dubbed "The Lawrence" after well-known Harlem Renaissance artist Jacob Lawrence – call for 131 units of market-rate housing, plus enclosed parking, that would be aimed a medical professionals, students and service workers.

The jagged, polygon-shaped complex would feature three sections totaling 29,716 square feet, with the main building along Maple Street, a second building on Michigan, and a small connector building between them, with patios alongside. Plans by Stieglitz Snyder Architecture feature a mix of market-rate apartments, including 36 studios, 52 one-bedroom units and 42 two-bedroom apartments. A fitness center is also planned. Second-floor residents will also have private rooftop patios above the center section.

However, Symphony ran headlong into a storm of opposition from neighbors and other city residents, who criticized the project as too big and out of scale with the community. 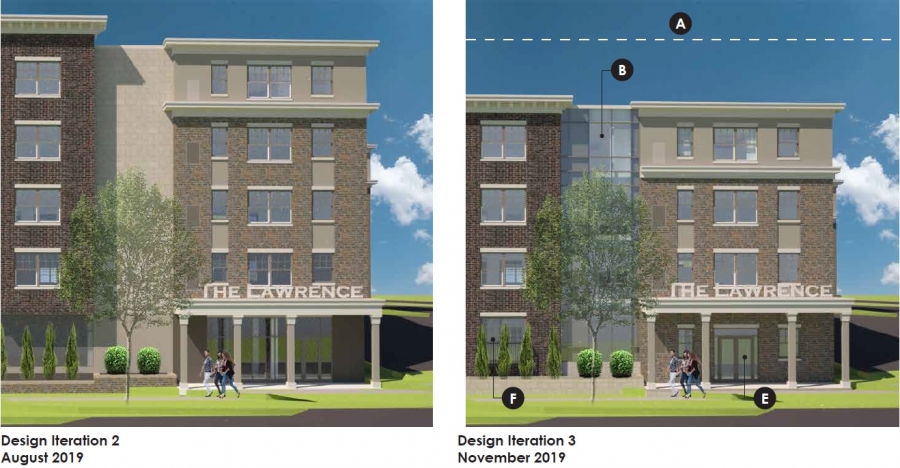 A side-by-side comparison of the height of the previous version with the new version of The Lawrence apartment complex. (Courtesy of Symphony Property Management)

They complained that the developer hadn't done enough to work with or consult them in advance, and ridiculed the proposed rents as unaffordable for those who live around it. And they worried about the effects of gentrification on the Fruit Belt.

Planning Board members echoed the neighborhood concerns, and tabled the project when it came before them in late October, sending Symphony back to the community for more discussions that resulted in the revisions. 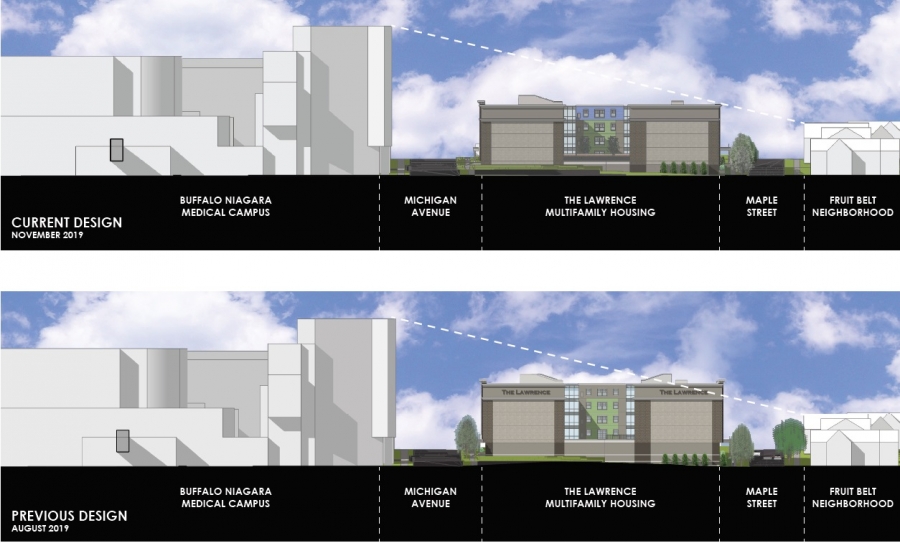 Another look at the height comparison of the previous version with the new version of The Lawrence apartment complex. (Courtesy of Symphony Property Management)

The developer also agreed on a series of actions to work with and support the Fruit Belt community, in an added bid to appease concerns.

Symphony will team up with Heart of the City Neighborhoods, a nonprofit, to help preserve existing homes and develop vacant parcels in the neighborhood. The nonprofit will use the developer's funds to support affordable renovations of homes and create affordable housing for first-time homebuyers and renters.

The firm will also provide funding and technical support to Alex Wright and the African Heritage Food Co-op's efforts to bring more fresh food into the community at the Carlton Street store. And it pledged to offer job and contractor training and to hire local women- and minority-owned businesses during the construction process.

Finally, Symphony is partnering with Wajed LLC to include local artwork in the project, by commissioning art, bringing rotating exhibitions, putting up murals and creating "artist-in-residence" programs – even after the building is completed.