Watching the Buffalo Bills backups lose their regular season finale Sunday to the New York Jets, 13-6, was good practice for what I’m doing early this morning: having a tooth pulled – and replaced with an implant.

I’ve been told by the dentist that the surgery isn’t going to be as painful as it was listening at times to CBS play-by-play man Tom McCarthy and analyst Jay Feely Sunday.

This isn’t meant as harsh criticism of McCarthy and Feely. Jim Nantz and Tony Romo couldn’t have made Sunday’s game exciting.

After getting Nantz and Romo, Al Michaels and Cris Collinsworth and Mike Tirico and Kurt Warner for the last three games, anyone calling Sunday’s finale would have been a letdown.

In hindsight, I wish WIVB-TV had carried the end of Miami’s upset of New England led by former Bills QB Ryan Fitzpatrick rather than the fourth quarter of the Bills game.

'Different' Bills team poised for longer playoff run than in 2017

McCarthy and Feely weren’t as good as they were earlier in the season when I praised their work in the Bills’ 21-17 victory over the Cincinnati Bengals.

They both said Sunday’s game had a preseason feel, which made me half-jokingly suggest CBS should have re-signed Steve Tasker for one game and had him work Sunday alongside Bills preseason partner Andrew Catalon.

McCarthy is easy to listen to. He has an excellent voice and can get excited when a play calls for excitement. Since there was only one touchdown and four field goals in Sunday’s game, there was little need for excitement. 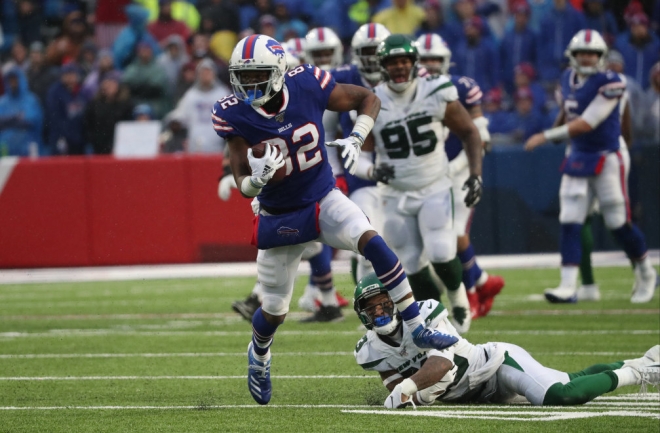 The play-by-play man also misjudged a few things visible to the naked eye, including a Bills first down that he thought was short and an incomplete pass directed at Bills receiver Duke Williams.

I’ll give McCarthy some allowance because it may have been difficult to see from the booth across the field because of the constant rain.

Feely, meanwhile, gets a lot of credit for being opinionated.

He undoubtedly spoke for Jets fans when he was surprised by coach Adam Gase’s decision to try a 51-yard field goal early in the game rather than go for it on a fourth down and one or two in what really was a pretty meaningless game.

Feely also spoke for Jets fans when he was baffled by the replay ruling that Bills quarterback Matt Barkley’s obvious fumble was called an incomplete pass.

But some of Feely’s opinions were head-scratching.

He gave a lot of credence to the importance of the Jets winning their sixth game in their last eight even though they were struggling against numerous Bills defensive backups; quarterback Sam Darnold easily could have had three or four passes intercepted; and Barkley was leading a Bills offense lacking their top skill players.

“They flipped the narrative in New York,” said Feely. “They’ll be able to go into the offseason with so much confidence.”

Feely also seemed to feel the Bills’ confidence might have been shaken because they lost three of their last four games. He didn’t mention two losses were against two of the AFC’s top teams, Baltimore and New England, and the third came Sunday when winning was secondary to staying healthy.

Feely also seemed to put undue credence on the employment status of Jets kicker Sam Ficken making his last field goal to give the Jets a 13-3 lead. Feely was as inconsistent as Ficken, who missed two kicks, including a 34-yarder earlier that led Feely to say “he may be kicking himself out of a job.” May be? It would be surprising if the Jets didn’t consider looking at a new kicker next season.

The analyst also seemed to feel Williams harmed his case of playing in the playoffs by dropping a pass before the receiver later redeemed himself and ended up with more than 100 yards receiving. Receivers drop passes, especially Bills receivers. You would think Williams’ status would be determined by his overall performance.

Now on to more highs and lows of CBS’ performance: 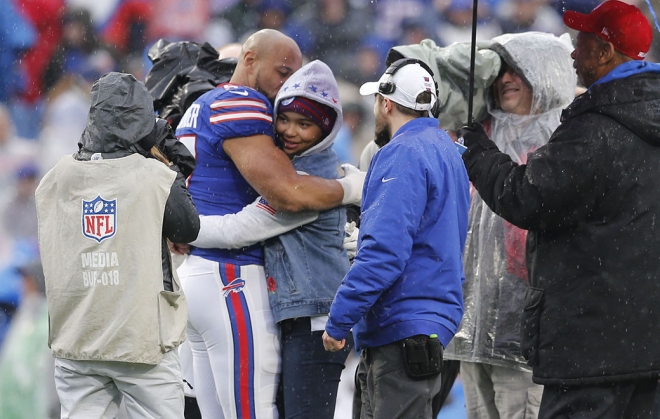 Bills linebacker Lorenzo Alexander hugs his daughter Zoie after she performed the national anthem before the start of Sunday's game. (Derek Gee/Buffalo News)

Singin’ In the Rain: CBS doesn’t often show the national anthem singers, but it twice ran clips of Zoie Alexander, the 11-year-old daughter of Bills linebacker Lorenzo Alexander, surprising him by singing it Sunday. It was a nice moment. Feely added that Lorenzo was “one of my favorite teammates.”

The Sound of Silence: Feely oddly was silent when the Jets threw two passes when they were inside the Bills' 1-yard line rather than run. They did get a touchdown on the second pass.

No Argument: Feely was surprised Allen played at all and said before he was pulled for Barkley: “Buffalo Bills fans will be very happy when he is off the field.”

Get a Grip: Feely told viewers that Jets quarterback Sam Darnold has a special grip for the ball when he passes in the rain.

Cue up Simon and Garfunkel’s 'At the Zoo': CBS showed a shot of animals at the Buffalo Zoo, with McCarthy playing historian and noting it is the third-oldest zoo in the country. McCarthy also noted that the Edward M. Cotter Fireboat – which was shown during a break – was originally built in 1900 and rebuilt in 1953.

Greatest Comeback History: CBS showed some clips of the Bills greatest comeback victory over Houston, 41-38, in a 1993 wild-card playoff game in which they trailed 35-3.

Relationship Issues: When McCarthy noted that the relationship between Darnold and Gase is a topic, Feely said: “I think it is much better than people think.”

Waterboy: CBS’ cameras caught a shot of Bills quarterback Josh Allen getting three water cups for his teammates while he was on the sidelines.

Billy Joel Plug: When CBS showed a shot of a sign denoting “Allentown,” McCarthy noted that it was a district in Buffalo and not just a sign of the love for the Bills quarterback. He added that Billy Joel – whose library of songs includes “Allentown” – is coming to Western New York for a concert next summer. 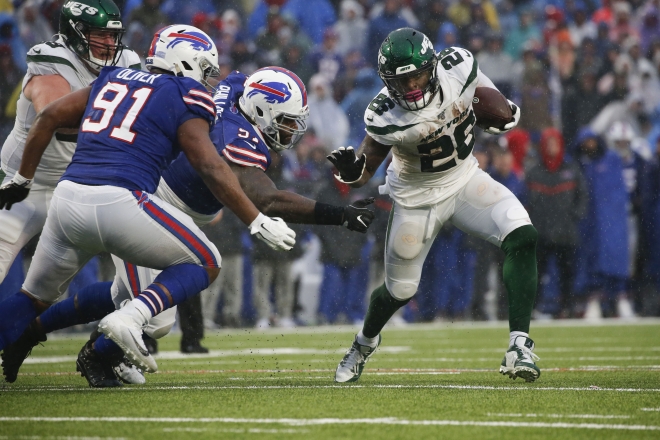 That Rings a Bell: After a nice run by the Jets’ Bell, Feely said that using Bell more often was something that the Jets and Gase “should have done more often.” After another Bell run, Feely said: “This is what they thought they were getting.”

Clarification: After saying Jets defensive coordinator Gregg Williams planned to go after Allen if he played, Feely came back and said he wasn’t suggesting that it would be in a “dirty way.”

Jet Fan Moment: Just as the camera focused on a Jet fan wearing Joe Namath’s No. 12 and wearing what looked like a fake fur coat, the guy spit. It was a metaphor for the Jets season.

Define “Almost”: As the play clock clearly went to zero before a Jets play proceeded, Feely said it “almost” ran out. In that case, the Jets “almost” made the playoffs.

Houston, We Don’t Have a Problem: Most Bills fans likely don’ t have a problem with Feely saying in the second quarter: “If I’m the Bills, I want to play Houston.” They will get their wish.