Jim Kubiak has been analyzing the play of the Buffalo Bills quarterbacks for BNBlitz.com. He is the all-time leading passer at Navy, has played in the NFL, NFL Europe and the Arena Football League, and has been a coach and executive in the AFL. He spent eight years as the radio analyst for the University at Buffalo and runs the Western New York Quarterback Academy to help develop the next generation of quarterbacks.

Bills coach Sean McDermott made the decision to protect as many valuable players as possible in the regular-season finale Sunday against the New York Jets.

While the Bills have lost three of their final four games, including losses to Baltimore, New England and the Jets, there is a feeling of hope and resiliency as the Bills take their lessons from the regular season into an AFC wild-card game at the Houston Texans on Saturday.

Quarterback Josh Allen was 3 for 5 for five yards in his limited time in the first quarter against the Jets to wrap up his second regular season with 3,089 yards in 16 games, an increase from 2,074 in 12 games as a rookie.

The Bills and Allen have come a long way in a short period of time. The combination of impressive defensive consistency, new offensive weapons and their ability to stay healthy has paid significant dividends.

Allen, who was not the starting quarterback at the beginning of last season, is one of the most-improved talents around the league and should be considered an elite playmaker.

He has had 20 weeks of game plans and the valuable experience that goes with playing against different opponents that have tried different ways to stop him. His growth has been impressive. He has improved his completion percentage from 52.8% to 58.8% and trimmed down on his interceptions from 12 to 9 in 102 more attempts. Allen has thrown 20 touchdowns compared to his 10 from last season. He has become the team leader making better decisions with the football, and is comfortable utilizing his powerful running ability on quarterback sweeps and game-changing quarterback sneaks.

Few of those traits were on display Sunday as Allen watched most of the game from the sideline.

Barkley's effectiveness and efficiency were hampered by steady rain and a lineup that was missing most of the Bills' top offensive options, including Devin Singletary, John Brown, Cole Beasley and Dawson Knox. Barkley looked rusty at times and posted an overall performance grade of 80%.

Allen played the first two series. Offensive coordinator Brian Daboll was cautious as Allen completed a base screen to Frank Gore, a wide receiver screen to Isaiah McKenzie, followed by a rollout to his left and subsequent throwaway on the third play.

The next Allen series was another three-and-out, and included a Gore run, an incompletion to Duke Williams and a 5-yard completion to Tyler Kroft in the flat. It appeared that every throw was designed to get the ball out of Allen's hand as soon as possible to protect him from any contact.

Barkley entered the game with two minutes remaining in the quarter and was hit from his blind side on his first play as Tarell Basham beat Bills left tackle Ryan Bates. 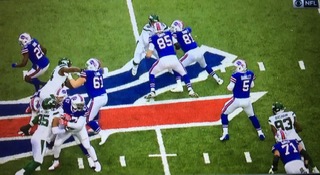 Barkley had no idea that Basham had beat his man and was bearing down on him. Bates was responsible for the hit and fumble that was overturned to an incomplete pass by replay. In Barkley's mind, Basham was accounted for in the protection scheme.

Barkley: 4 for 7 passing for 29 yards with one interception.

Barkley, who is a smart and a very capable backup, was fooled by a corner blitz in the second quarter. 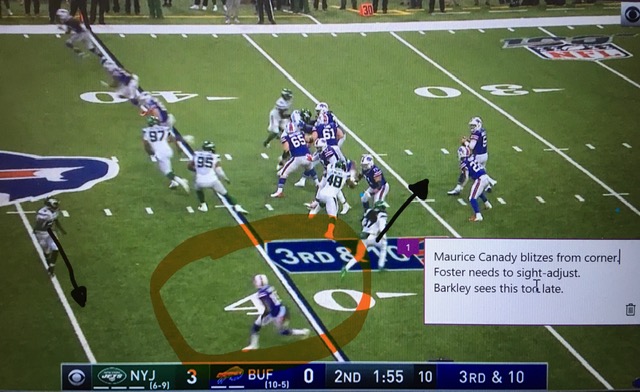 Jets defensive coordinator Greg Williams blitzed cornerback Maurice Canady from the weak side. Corner blitzes are difficult to handle because cornerbacks are not generally accounted for in protection schemes. Offenses handle such problems in two specific ways:

Barkley should throw the sight adjustment to Robert Foster, who is seen here looking for the quick throw.

The big difference between Allen and Barkley is Allen possesses amazing athletic ability, which could have allowed him to make an athletic play to escape the free-rush corner blitz. Barkley does not possess that kind of ability and must function in the framework of a sight adjustment throw to counter the blitz.

This is among the reasons that many teams are drafting quarterbacks with traits such as those possessed by Allen, Lamar Jackson and Patrick Mahomes. They can make unblocked rushers miss and change the outcomes of games with their legs.

Another turnover cost the Bills on the first drive of the third quarter. 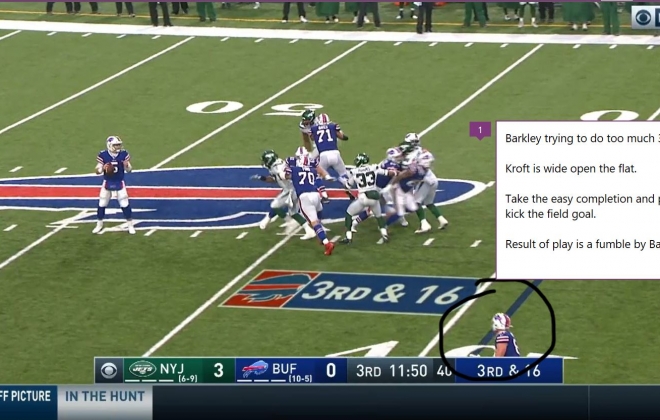 Barkley led the Bills on an impressive eight-play drive. Rather than taking what was given underneath the Jets' coverage, he focused down the middle of the field, looking for the big play.

An easy completion to an open Kroft could have resulted in a field goal attempt, but instead was a turnover that ended what had been a productive drive.

Perhaps Barkley has been watching too much Allen film, as it appears that he was looking to force the ball into coverage. The difference is that Allen could have bought himself more time or taken off and run. Barkley's skill set is built upon timing, reading, being decisive and early with his decisions. In retrospect, he will see that he should have completed the ball into the flat immediately rather than risk the negative play that occurred.

On the next drive, Barkley shows off terrific anticipatory skills on an out route versus a Jets blitz.

This is what Barkley does best, and perhaps what Allen lacks the most. At his best, Barkley plays with a great sense of anticipation. He reads and releases the football into the weakness of coverage on time and sometimes before the break of the wide receivers. Too often, Allen waits for players to flash open and then lasers the ball to them.  Two entirely different styles of playing the same position in the same offense.

Here the Jets bring a five-man pressure with safety Jamal Adams, who was missed in the protection. Barkley felt the pressure and threw to McKenzie on the break of his route. This takes skill, knowledge, accuracy and trust and was Barkley's most impressive play of the day.

Barkley: 7 for 15 passing for 138 yards, one interception. Two kneel-downs for minus-4 yards rushing.

Barkley played better as the game wore on as you would expect from a player who hasn't played in a while. He grew more comfortable as Daboll used play-action on first down to help the offense with easier throws. On the first play of the fourth quarter, on first-and-10, Barkley fakes to running back T.J. Yeldon. This makes the Jets' linebackers react to the run, allowing Williams to come across the middle behind the linebackers. 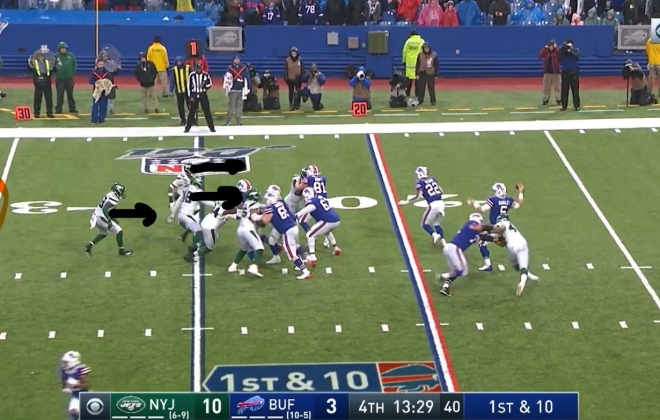 This type of action allowed Barkley to easily identify and throw to open receivers. The Bills and Daboll have done the same with Allen in order to make decisions and throws simpler as there are less defenders to navigate.

Two plays later, Barkley gets the ball out into the flat to Williams on a whip route. Barkley's throw and read were perfect if not for the unfortunate drop by Williams. 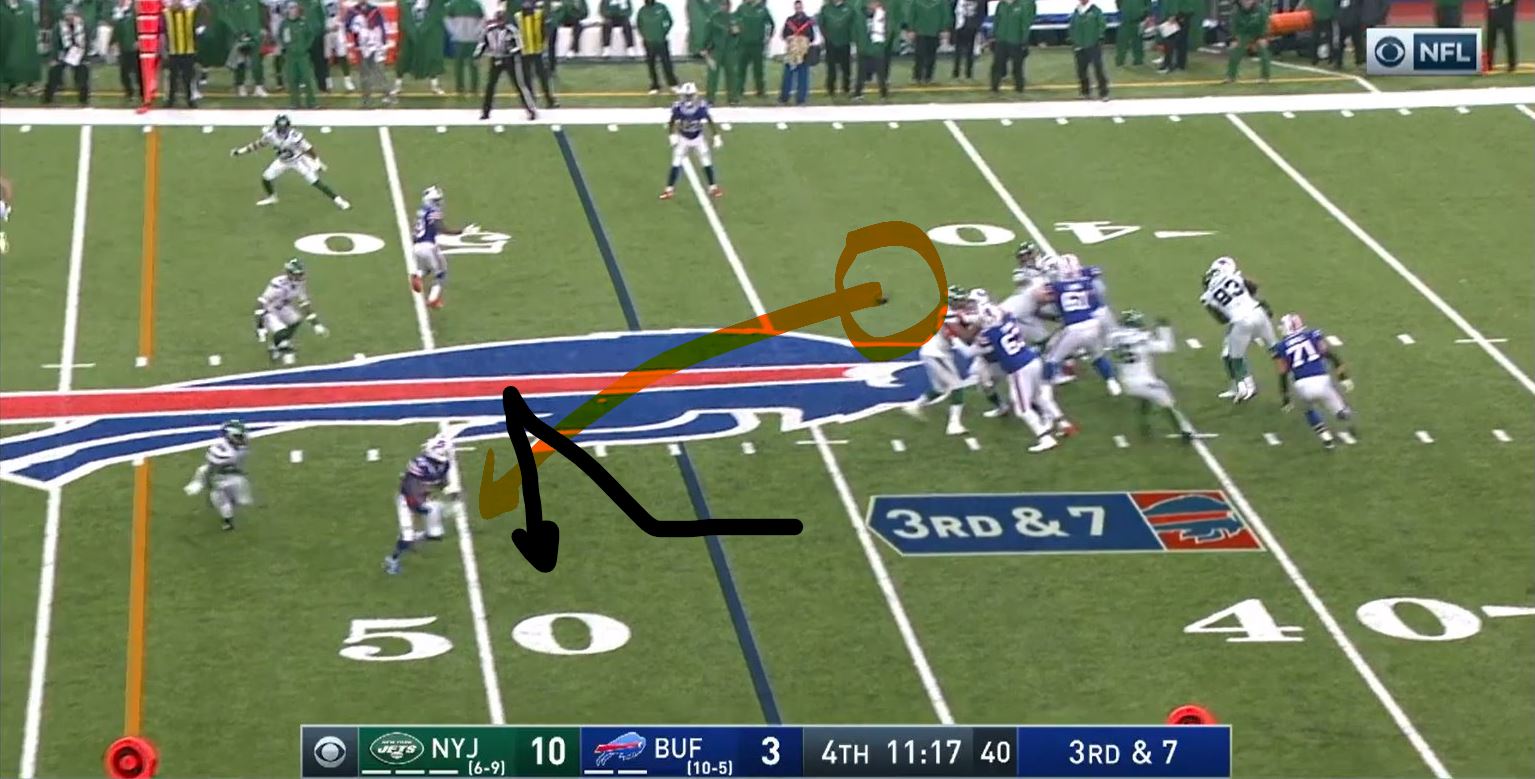 Barkley again showed anticipation, reading the man-to-man coverage and attacking the outside flat with a whip route. He gets the ball off just in time before Basham arrives.

However, movement and throwing on the run are not a natural strength for Barkley and his final interception demonstrates this weakness as Barkley play-action fakes to his left as he begins to roll right. In these situations, quarterbacks are taught that they must have enough depth to get outside of their tackles without the defensive ends putting their hands on them. Barkley was just deep enough but is forced to throw before he was ready, resulting in the early attempt being off target and uncatchable. 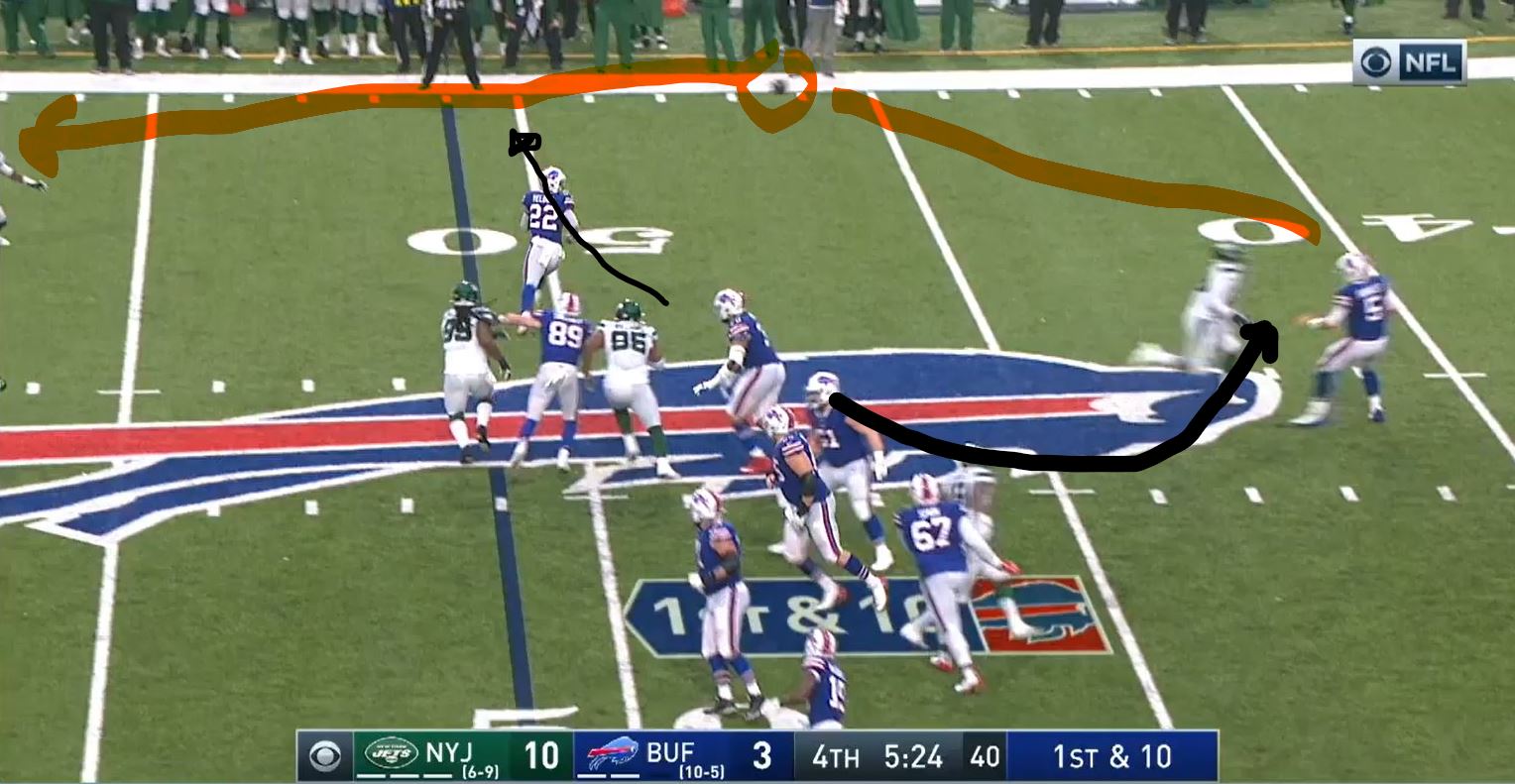