Mamie Lang Kirkland was 111 years and 116 days old when she passed away Saturday in her Buffalo home.

She was the second oldest person in New York State, according to Gerontology Wiki.

"She lived a long and fruitful life, and witnessed many of the world's miraculous transitions," said a son, Tarabu Betserai Kirkland. "In her older life the world began witnessing her and her courage and strength and quiet wisdom."

Born Mamie Lang in Ellisville, Miss., about 25 miles north of Hattiesburg, Kirkland was the second of five children born to Edward and Rochelle Lang.

She maintained she died and went to heaven at age 5 after coming down with typhomalarial fever, but was revived with a tea brewed by her grandmother, a midwife and herbalist. It took her a year to learn to walk again.

Kirkland's family fled Ellisville when she was 7 after her father, a Baptist minister, and his friend were threatened with lynching. She vowed never to set foot in Mississippi again.

“My dad came home at 12:30 in the morning,” Kirkland told an interviewer from Equal Justice Initiative in 2015. “And he said, ‘Rochelle, I got to leave. Get the children together, then you leave early in the morning.’ ” 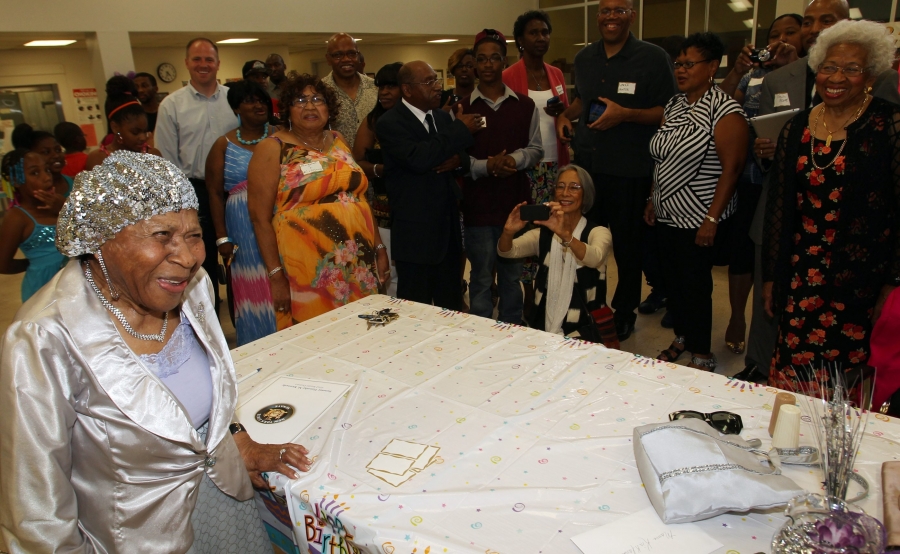 Kirkland's father told them that the friend returned several years later and was hung to death in a public lynching in Ellisville in 1919.

Kirkland's family arrived by train in East St. Louis, Ill., where they spent two years before the violent East St. Louis Race Riots of 1917. They resettled in Alliance, Ohio, where her parents ran a boarding house. They were threatened again, this time by the Ku Klux Klan, whose members burned a cross in their front yard. German neighbors fond of Mrs. Kirkland's father came to the family's defense, hoisting Lugers and rifles to ward off attackers.

She married one of the boarders, a railroad worker named Albert Kirkland, when she was 15 and they moved to Buffalo in 1924. They raised nine children.

After Kirkland's husband, a steelworker in Buffalo, died in 1959, and with only an eighth grade education, she became a sales representative for Avon. A Buffalo News story on centenarians in 2016 noted that Kirkland was still selling Avon products at age 107.

Kirkland was convinced to return to her birthplace in 2015 by her youngest son, Tarabu Betserai Kirkland, a writer and filmmaker in Los Angeles. His documentary film, “100 Years from Mississippi,” told the story of her family's flight. A New York Times reporter chronicled her visit in a front-page story.

She was honored by the Equal Justice Initiative in 2016, traveling to New York City to receive its Lynching Legacy Award.

At the ceremony, Kirkland declared, “I left Mississippi a scared little girl of 7 years old. Now I’m 107, and I’m not frightened anymore.”

She was honored again in 2018 as the oldest lynching survivor at the opening of the Legacy Museum and the Peace and Justice Memorial in Montgomery, Ala. The museum displays photographs and an oral history of her story.

She was known for her jewelry and fondness for the color purple.

Kirkland was an active member of First Shiloh Baptist Church for more than 85 years.

Retired attorney Greg Brown wasn't a blood relative, but he said Kirkland was like a "second mother" to him.

"Although she didn't have letters, she had a common sense and an ability to talk and relate to people," Brown said. "She was a very devout Christian but she wasn't just a Sunday Christian. She practiced it all the time and with people in a helping way. She was like a counselor or a mentor or helper to people. She also did this as an Avon delivery lady, where she came upon people who needed not only their beauty products but her wise counsel."

She also rarely missed a chance to vote.

Kirkland's life encompassed 20 presidents, including the first black president, something she never expected to happen in her lifetime.

“People died so I can vote. Years ago, people didn’t have a chance to vote,” Kirkland told The Buffalo News in 2014, when she was interviewed at her polling place at Canisius College. “I’m 106 and I get out to vote. The young and old should do the same, because it means a lot to everyone.”

Attorney and artist LeRoi Johnson recalled the guidance Kirkland provided when he and Tirabu Kirkland, then known as Albert Jr., were seeking to improve educational opportunities for minorities at Canisius College as freshmen in 1967. The two co-founded the Afro-American Society, and they pushed the administration to admit more minority students, add black history courses, provide a scholarship program for minority students and to offer tutorials to incoming freshmen to better prepare them for the rigors of college.

"She spoke to us about the need for doing things for others, not just for yourself, and also about the value of education," Johnson recalled. "She said to set your goals high and understand what you're doing and what you want to accomplish, and not to settle for less.

"Everything we planned at her dinner table – along with the good home-cooked food she fed us – happened," Johnson said.

Services will be held at 11 a.m. Friday at First Shiloh Baptist Church, 15 Pine St. Burial will be in Pine Ridge Cemetery.