There was no shortage of fun in Buffalo sports during 2019 sprinkled, of course, with the requisite disappointment we've all become used to. But the biggest takeaway from the year might be what it could give us for 2020.

The Bills and Sabres have both raised the hopes of fans to the point where the flip of the calendar could bring a rarity – postseason play for both teams in the same year for the first time since 2000.

The fun during the first year of the new century, of course, was short-lived as the Bills lost the Music City Miracle playoff game in Tennessee on Jan. 8, 2000, and the Sabres were eliminated by Philadelphia that April in a five-game, first-round series.

The Bills didn't play another playoff game until that dreary loss in Jacksonville in January 2018. By then, the Sabres had entered their post-tank drought that continues to this day.

But the Bills are headed to the postseason this year and the Sabres are having an optimistic ride through the first half of their season under new coach Ralph Krueger, seem to be in a weaker-than-expected division and have lots of home games remaining.

So what does it mean could be ahead? An interesting January combined with an interesting spring around here for the first time in a long time. When the decade began, Jack Eichel and Josh Allen were both 13. Now they're the great hopes for the future.

1. Bills make another playoff run: Quarterback Josh Allen and the defense came of age and coach Sean McDermott's process has led to the first 10-win season since 1999. Lots of skepticism nationally because of a weak schedule but aside from a Week 10 stumble in Cleveland, it's a team that's simply taken care of business when it needed to.

That's two postseason trips in three years after that 18-year drought. A Thanksgiving Day win at Dallas. A Sunday night win in Pittsburgh. Who knows what might be next? And imagine what super fan Pancho Billa, lost to cancer in May, must be thinking in that great stadium in the sky. Viva los Bills, indeed. 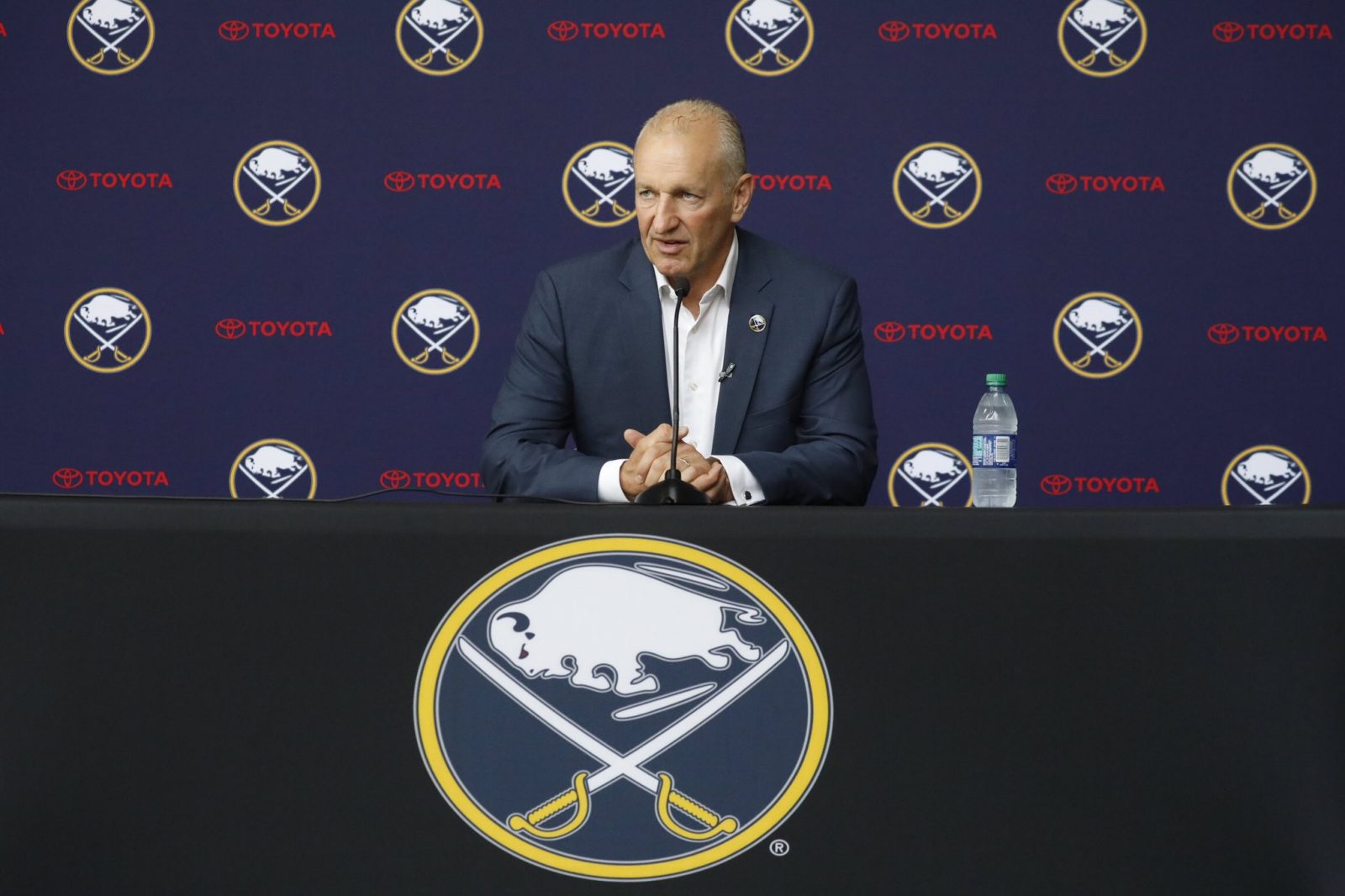 2. Sabres change coaches again, get back into playoff hunt: The Phil Housley era ended with a thud, with a terrible 1-13-2 slump in March ruining any playoff hopes and extending the club's postseason drought to an NHL-high eight years.

GM Jason Botterill, under fire for the Ryan O'Reilly trade the previous summer and lack of movement until getting Brandon Montour at the trade deadline, went outside the box in May by hiring Ralph Krueger and giving the 59-year-old another NHL chance six years after he was fired in Edmonton. So far, so good. The Sabres started 8-1-1, slumped in November but came back in December to get themselves into playoff position behind the best season of Jack Eichel's NHL career to date. And even though they lost both games to Tampa Bay, the Sabres reveled in their first international trip in eight years when they spent a November week in Stockholm.

3. Bullish on hoops: The UB men's basketball team had the greatest season in modern Big 4 history, posting a 32-4 record. The Bulls became the first Big 4 club to earn a ranking in 47 years when they cracked the Top 25 in mid-November – and held a spot for the rest of the season, finishing at No. 15. They won the Mid-American Conference regular-season title at 16-2 and won the conference tournament for the fourth time in five years with an 87-73 win over Bowling Green.

Holding a No. 6 seed in the NCAA Tournament, UB won a game for the second consecutive year by rolling Arizona State and former coach Bobby Hurley, 91-74. But the season ended with a 78-58 loss in the second round to eventual national finalist Texas Tech. C.J. Massinburg was named MAC Player of the Year and Nate Oats was named MAC Coach of the Year for the second straight year. On March 27, Oats resigned to take the job at Alabama and was later replaced by top assistant Jim Whitesell.

4. From Newfane to the NBA: Newfane native and former Canisius coach John Beilein pulled a stunner in May, leaving Michigan to become the head coach of the Cleveland Cavaliers. Beilein, 66, spent 12 seasons in Ann Arbor and was Michigan's all-time victory leader, twice taking the Wolverines to the national championship game. He coached Canisius to an 89-62 record and three postseason berths from 1992-97. That included the Griffs' 1996 NCAA trip, their only once since 1957. 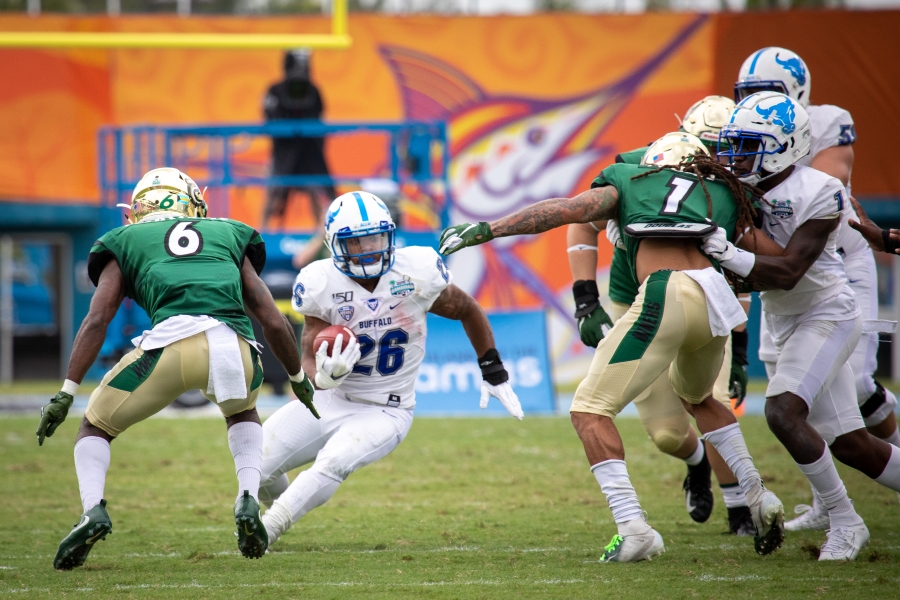 Jaret Patterson (26) runs the ball during the first half play at the Makers Wanted Bahamas Bowl at Thomas A. Robinson National Stadium. (Special to The News)

5. Going bowling: The UB football team won seven games and earned a second consecutive bowl berth for the first time since turning Division I, a trip to the Bahamas Bowl. With a win against Charlotte, UB had its first bowl victory in program history. After a 2-4 start, coach Lance Leipold's Bulls turned their season around with a 5-1 flourish that saw them explode for four 40-plus point outings. With Jaret Patterson (1,843) and Kevin Marks (1,078), the Bulls have two 1,000-yard rushers in the same season for the first time in school history.

6. Worst to nearly first: The Buffalo Bandits hired legendary players John Tavares and Rick Kilgour to serve as co-coaches and enjoyed a massive turnaround, going from 8-10 and out of the playoffs to a 14-4 mark and a trip to the National Lacrosse League finals. The Bandits took the league's best record into the postseason and beat New England and Toronto to advance to the best-of-three final but lost that in two straight to Calgary (10-7 and 14-13 in OT). Matt Vinc was named MLL Goalie of the Year while Tavares and Kilgour shared coach of the year and Steve Dietrich was named GM of the year.

7. UB women go dancing again: Coach Felisha-Legette Jack's team made the NCAA women's basketball field for the third time in four years after winning the MAC Tournament and posted an 82-71 first-round win over Rutgers as a No. 10 seed before losing to Connecticut, 84-72, in a second-round game. UB finished 24-10 and Cierra Dillard was named MAC Tournament MVP in a whirlwind spring that saw her get drafted by the Minnesota Lynx of the WNBA. Legette-Jack had suitors for bigger jobs but opted to stay at UB under a new contract.

8. Upheaval in women's hockey: With former Olympians such as Getzville's Emily Pfalzer and goalie Shannon Szabados on their roster, the Buffalo Beauts went 11-4-1 and reached the National Women's Hockey League's Isobel Cup final for the fourth consecutive year but lost to Minnesota. After the season ended, the Pegulas turned ownership of the team back over to the NWHL and the league moved out of LECOM Harborcenter and into the Northtown Center of Amherst. Most of the top players boycotted the 2019-20 season while waiting for a new league to form, whether run by the NHL or not, that would have better benefits for players.

9. Gridiron glory: Canisius and Clymer/Sherman/Panama finished atop The Buffalo News polls after winning state football championships. Canisius won its first state Catholic title since 2016 with a 25-24 victory over Cardinal Hayes on C.J. Ozolins' two-point conversion on the final play. Meanwhile, CSP capped an 11-1 season by clubbing Moriah, 47-6, in the Carrier Dome for its second-straight Class D crown. CSP has won 24 of its last 25 games for coach Ty Harper.

10. Two for the future: Williamsville South junior basketball star Amari DeBerry signed her letter of intent to play under legendary coach Geno Auriemma at UConn starting in 2021. Meanwhile, 12-year-old Jada Kenner of Tapestry Charter School set a world record for her age group in the 300 meters indoors at 39.24 in the state meet in March on Staten Island.