I'm not a big Hall guy or a small Hall guy.

You can vote for up to 10 players every year on your Baseball Hall of Fame ballot and that's what I've done each of the first three years I've had a ballot.

I don't feel obligated to do that. It's simply worked out that way. It's been a crowded ballot with a lot of candidates.

Then we got this year's ballot. Derek Jeter is the only obvious first-time choice. Do we really need to use up newsprint and web space to discuss why Derek Jeter is a Hall of Famer? Sure, he spent the last few years of his career not playing a very good defensive game at shortstop, but what about the first 15 or so years of his career and all those World Series rings?

From the time he showed up as a regular in the Bronx in 1996, Jeter was a winner and so were the Yankees. Between Jeter this year and Mariano Rivera last year, it's hard to imagine easier choices.

Once you got past Jeter, however, things are very, very muddy. The ballot has to be mailed in -- yep, still on paper through the U.S. Postal Service -- and postmarked by Dec. 31. I mailed it Friday, the longest time I spent mulling my choices.

Results will be announced Jan. 21 on MLB Network and for the first time, I didn't get to 10 or even close to it. I only cast six votes this year. No patterns to my voting really. Every year really stands out on its own. Maybe I'll get back to 10 some year. Maybe I'll only pick two.

Here's a look into my ballot:

First off, I broke my own rule this year. Generally, I have a hard time believing how you can vote someone into the Hall one year and take their vote away in another. You might do some research and come to a new conclusion that a player deserves to be in after you haven't voted for him, but to suddenly decide he should be out after you've already deemed him Cooperstown-worthy?

Normally, I can't say how you can do that but I did it this year. More on that in a minute. It leaves four players remaining on my ballot from previous years to get the vote again this year.

* Barry Bonds and Roger Clemens: I think everyone has made their decisions on them, pro and con. They keep hovering around 60% of the vote. I doubt they hit the 75% they need to get inducted. But I don't vote on a guy based on if I think he's going to get in. There's no need to belabor the argument either: They were great long before the PEDs forever marked their careers, and they weren't in the testing era anyway. Put asterisks on their plaques if you want. But put them in.

* Curt Schilling: Some people want me to invoke the "character clause" here. I did it to him for one year for that infamous T-shirt about lynching journalists. That was my statement. He's the greatest clutch postseason starter of our generation. He had more than 3,000 strikeouts and the highest strikeout-to-walk ratio in history. He should easily be in. Might happen this year if he can jump from last year's 60.9 percent.

* Larry Walker: Sure, he gets helped by playing a lot of years in Denver's Coors Field and his career was marked by injuries. But he was a three-time batting champion and seven-time Gold Glove man in the outfield. He was a star in Montreal and Colorado and a beloved teammate at the end of his career in St. Louis. Last year he went from 34.1 percent of the vote to 54.6. This is his final year and is it possible to see him jump another 20 percent?

Sure it is. Recent history has been kind to last-year-on-the-ballot guys like Tim Raines and Edgar Martinez. At 72.7, Walker's Wins Above Replacement figure is surpassed on this year's ballot by only Bonds, Clemens and Schilling. He had 2,160 hits, 383 home runs and 230 stolen bases. He got crowded off the ballot in the past. Hope that doesn't happen this year.

* Andy Pettitte: I know the arguments against him, specifically a lot of run support, a 3.85 career ERA, only three top-10 ERA finishes, a high win total (256) fortified by having Mariano Rivera preserve games. And there's PED chatter. I discount that one. First off, Pettitte was forthright in describing two uses of HGH to rehab an elbow injury in 2002. That's not performance-enhancing. Secondly, there was no testing then anyway.

Pettitte had 19 wins in the postseason, the most in history. Again, stat hounds say you can't consider wins. But why else do we keep score? He was the guy the Yankees turned to in key spots over and over again. As starting pitchers go, that era of greatness in the Bronx is defined as much by Pettitte as anyone else. He got 9.9 percent of the vote last year. Let's see where he goes from there.

Thought hard but not yet

* Omar Vizquel: Welp, here's the guy I broke my rule over. Got the vote last year, doesn't this year.  He's probably going to get over 50 percent this year and I watched and talked with him extensively while covering the '90s Indians playoff runs. He was a wizard at shortstop, a glue guy on the infield and in the clubhouse on a club often filled with chaos. He had 2,877 hits in his career but had a career slugging percentage of .352 and an OPS of .688. But by playing 24 years, is he just a compiler of numbers? And a deeper look at defensive metrics isn't as complimentary toward him. He's off for now. He could easily come back. He's not going to get 75 percent so there's lot of time to study him.

* Paul Konerko: I bet he's going to not get 5 percent and falls off the ballot like Carlos Delgado, Jim Edmonds and Kenny Lofton all did. That's an injustice really. Konerko is an icon for the White Sox, belting 432 home runs over 16 years and leading them to the 2005 World Series title, their only one in the last 102 years. But he only has two top-10 MVP finishes, no batting titles, no Gold Gloves.

* Scott Rolen: Voters I talk to and read love him. Never once did I think about him as a Hall of Famer while watching his career. Same thing with Konerko really. It's not hard to find web sites calling him a top-10 third baseman of all time. Settle down. He had eight Gold Gloves but just one top-10 MVP (when the Cardinals were swept by the Red Sox in '04). Not this year.

Will get votes, just not this one

Jason Giambi, Todd Helton, Andruw Jones, Jeff Kent, Manny Ramirez, Gary Sheffield, Sammy Sosa and Billy Wagner all have some legitimate Hall arguments to make. They all strike me as Hall of Very Goods or, in the case of Sosa, pure PED frauds.

Props for making the ballot but ...

So recapping the Class of 2020 on my ballot, it's Barry Bonds, Roger Clemens, Derek Jeter, Andy Pettitte, Curt Schilling and Larry Walker.

An early look at 2021 shows absolutely no first-time locks in the recent vein of Jeter, Mariano Rivera, Ken Griffey Jr., Randy Johnson, Pedro Martinez, Chipper Jones or Jim Thome. That's a heck of a five-year run right there with all those guys.

It leaves voters already pondering the Class of 2022, when decisions will have to be made on prominent first-timers Alex Rodriguez and David Ortiz. And that will be the last year for Bonds and Clemens if they don't make it in the next two votes. That's going to be an interesting ballot. 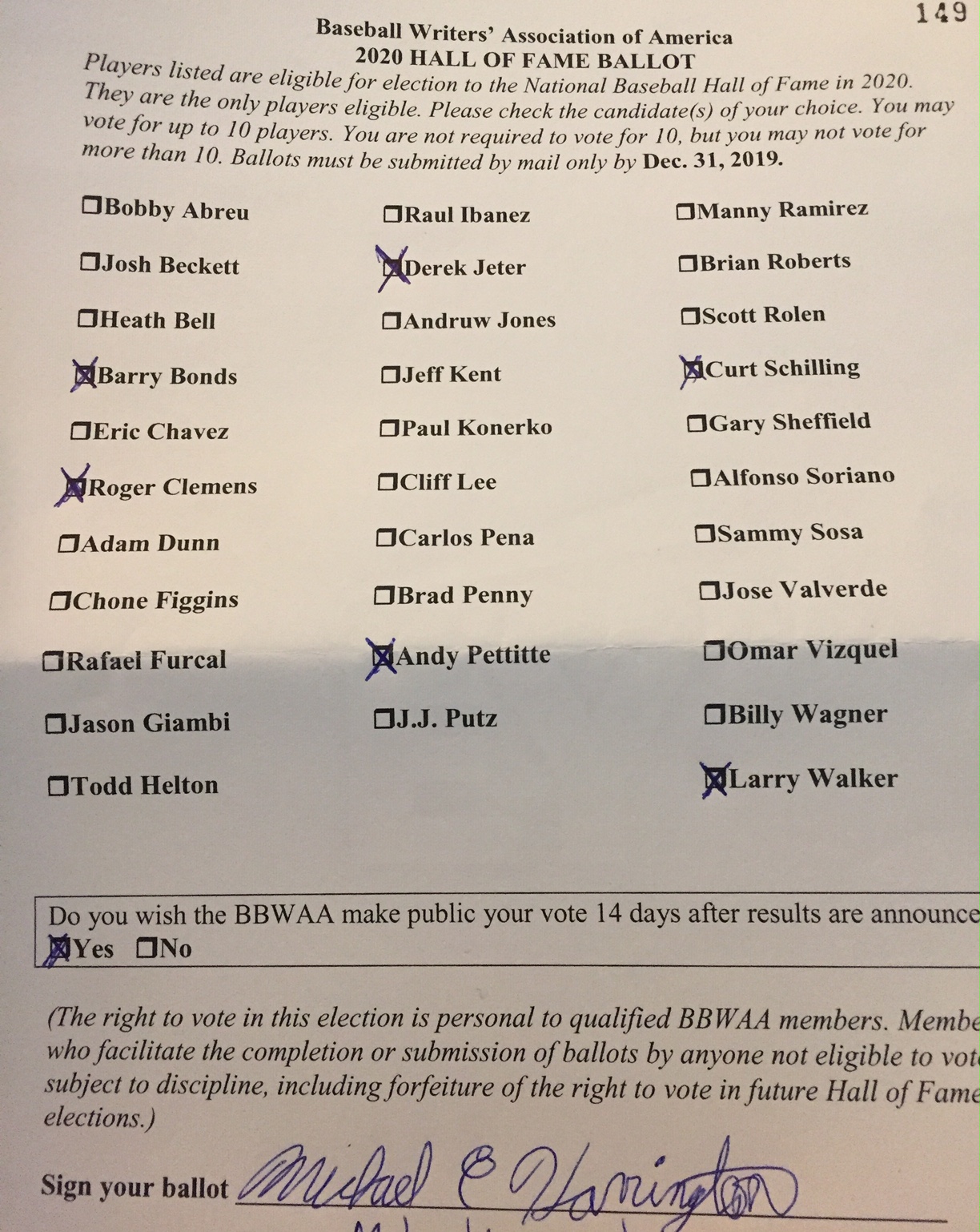