It is not exactly a game that sticks in memory. On Nov. 30, 1969, a Buffalo Bills team coached by John Rauch – hired with the hope he could take the Bills to the same heights he once enjoyed with the Oakland Raiders – defeated the Cincinnati Bengals, 16-13, at the old War Memorial Stadium at Jefferson and Best.

Joan Hoak was there. She was deep into her final month of pregnancy, so close to the point of giving birth that her husband, Don, did not want her to go. Family legend has it that she experienced labor pains at the place often called "The Rockpile," but Joan says that is not so.

What is indisputably true is that on a cold and windy day, she stayed put for the whole game between two struggling teams. She saw defensive back Booker Edgerson turn a third-quarter fumble into the only Bills touchdown, and then she hung around as Buffalo held on to win.

“You’ve always got to stay until the end,” Joan explained.

Eleven days later, at Millard Fillmore Hospital – on a day sandwiched between season-closing Bills road losses to Kansas City and San Diego – Joan gave birth to her daughter Donna, the fifth and last of her five girls, who in a sense had already spent an entire autumn doubling up on her mother’s season ticket. 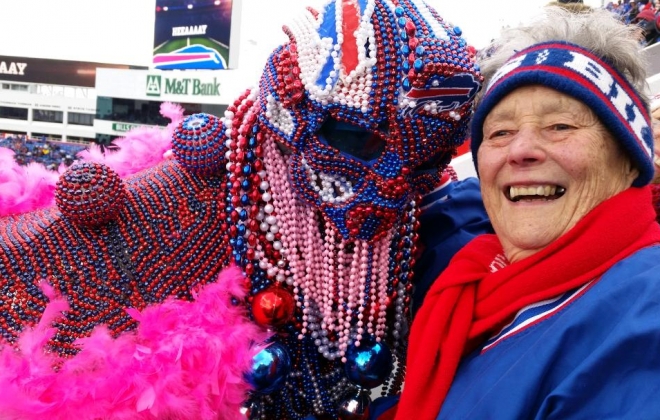 Joan Hoak enjoys a bit of the flavor at a Bills game. (Family image)

Sunday, as the Bills celebrate fan appreciation day in their regular season finale at New Era Field against the New York Jets, Joan and Donna will be watching the game together, as they nearly always do.

Joan, a Buffalo native who now lives in Wheatfield, has been attending Bills games for 55 years, and mother and daughter have shared season tickets since the early 1990s. Joan, now 83, has painful back problems that cause her to use a wheelchair. Donna is there to help as they go to their seats, and she is always aware of the larger symmetry.

“She carried me in 50 years ago, and now I’m grateful to be pushing her in 50 years later,” Donna said.

While they do not see themselves as extraordinary in any way, they are emblematic of a fan base in greater Buffalo and beyond that has managed to help keep a National Football League franchise here – despite many frustrations on the field – when teams and owners have deserted much larger American cities.

Joan said she and her husband first bought season tickets in 1964, knowing the Bills were on the brink of winning an American Football League championship. They both loved the team, and the moment that triggered such longtime allegiance was the day a friend invited Don to a game.

Sean Kirst
At the Cave of the Winds in the winter, new descent to ice and wonder
Farewell to Fantasy Island: Always fun for kids, maybe even more wow
A Southtowns guy gets a Super Bowl ring, thinking of his grandfather
For young pupils at Buffalo String Works, music as shared language
More Stories

"If you were a good wife," Don said in good-natured needling, "you wouldn't care if I go."

What a coincidence. Joan felt the same way about good husbands.

That was their epiphany: Why not buy season tickets? They would soon be raising five daughters and were always on a budget – Don was a telephone company worker who became president of a Communication Workers of America local, while Joan drove a school bus – so the expense of following the Bills often meant shuffling around bills of a less exciting sort.

They briefly gave up the seats amid the bleakest years of the mid-1980s, but they had them back – section 333, upper deck – in time for the electrifying breakthrough later in that decade, when it became evident that the Bills in a top-to-bottom way were truly good.

There is more than a little of the same feeling around Buffalo right now. Joan likes watching Josh Allen play quarterback, especially those third or fourth down plays when it seems as if he is smothered by tacklers. She relishes how he desperately claws and stretches just to come up with a first down, an attitude this young team seems to share collectively on both sides of the ball.

It is a bit like the way Joan sees life herself – you do everything you can for those who count on you, whenever you need to do it – a philosophy that again encompasses tens of thousands of others in the stands.

At 83, she is grateful for the devotion of her daughters. One of them, Sue Lopez, surprised her this year by making it back from Tucson for Christmas, meaning Joan spent the big day with all five of her kids - Joan, Sue, Kim, Shelley and Donna - for the first time in 30 years.

There is no  way of explaining how Donna became Joan's regular game day companion, except by marking it up to destiny. In the 1980s, Donna's boyfriend of the time was a big Bills fan, so the teenagers often bought end zone seats and then rode along to the stadium with Donna's parents and Pat Daboll, an aunt who also had a season's ticket - and is no relation to Brian, the Bills offensive coordinator.

They were all there for the great 32-point playoff comeback against the Houston Oilers in 1993, when Joan never even contemplated joining the thousands who left early. By the end of that decade, Don's health had caused him to stop going, and Donna became Joan’s usual companion. 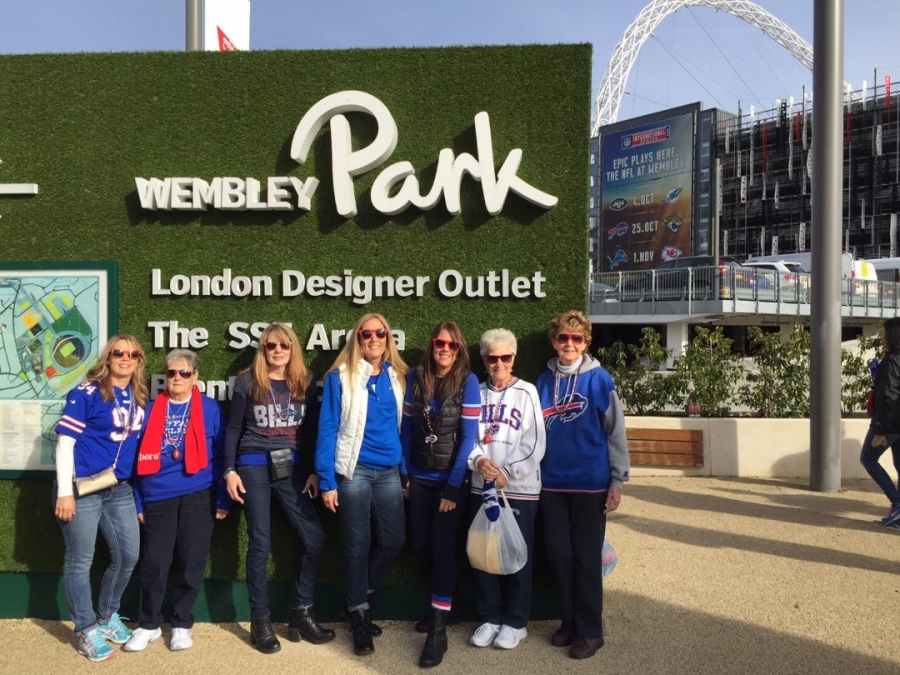 In London for a Bills game: Joan Hoak (second from left) with daughters Donna, Kim, Shelley, their aunt Pat and a friend, Irene. (Family photo)

Since then, she estimates they have attended 90 percent of home games together. Donna was there when her mom had the unexpected chance to meet Hall of Fame quarterback Jim Kelly, and she and several others in her family joined Joan in London when the Bills played Jacksonville there.

Donna, a manager at Excelsior Orthopedics, gives up her seat only when her daughters, Kerstin and Riley, have some event she simply cannot miss. A Bills game is an all-day deal, and she said her husband, Joel, has always been supportive because he understands:

There is something precious in a you-never-can-get-it-back way about spending this kind of stadium time with your mother.

Donna's voice cracks when asked what a Bills championship would mean to Joan. “Honestly, if my mom could see them win the Super Bowl?” said Donna, who had difficulty finishing the thought. 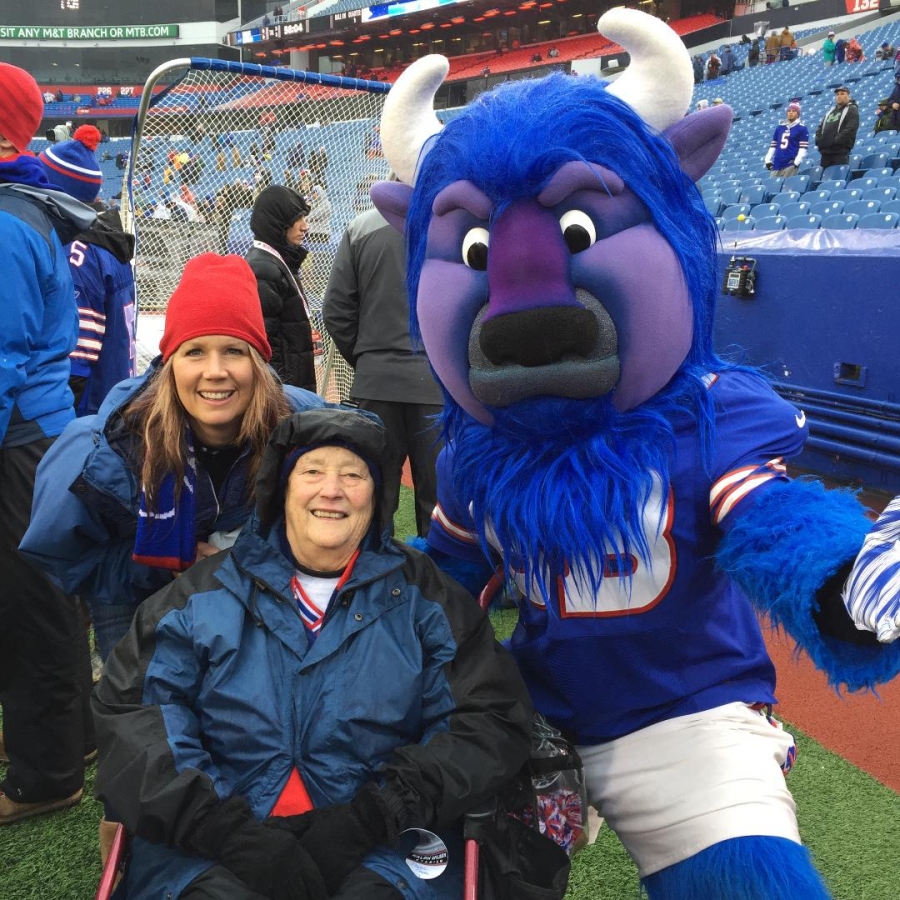 The vision makes mother and daughter think of Don Hoak, who died 15 years ago without seeing it happen. It would be a feeling in the gut beyond description, yet Donna said – even if that Valhalla moment never comes to pass – she has experienced plenty of peaks just through all the journeys to the stadium.

“She always guts it out,” Donna said of Joan, whose philosophy is simple. If you fail to stay for the entire game, you never know what you might miss.

With her husband, Joan put together enough money to journey to the Rose Bowl in 1993 for the Super Bowl. After jumping off to a quick 7-0 lead, the Bills ended up getting buried by the Dallas Cowboys, 52-17.

Joan was not going anyplace. She was there in the fourth quarter for one of the memorable you-never-quit plays in Super Bowl history, when Bills wideout Don Beebe sprinted down much of the field to save a touchdown by knocking the ball away from Cowboy defensive tackle Leon Lett, even though any chance of a Buffalo win was long gone.

In that effort, Beebe reinforced the family rule, the reason Donna and her mother already plan on being there next season.

"It's in my blood," said Joan, never one to surrender to the clock. 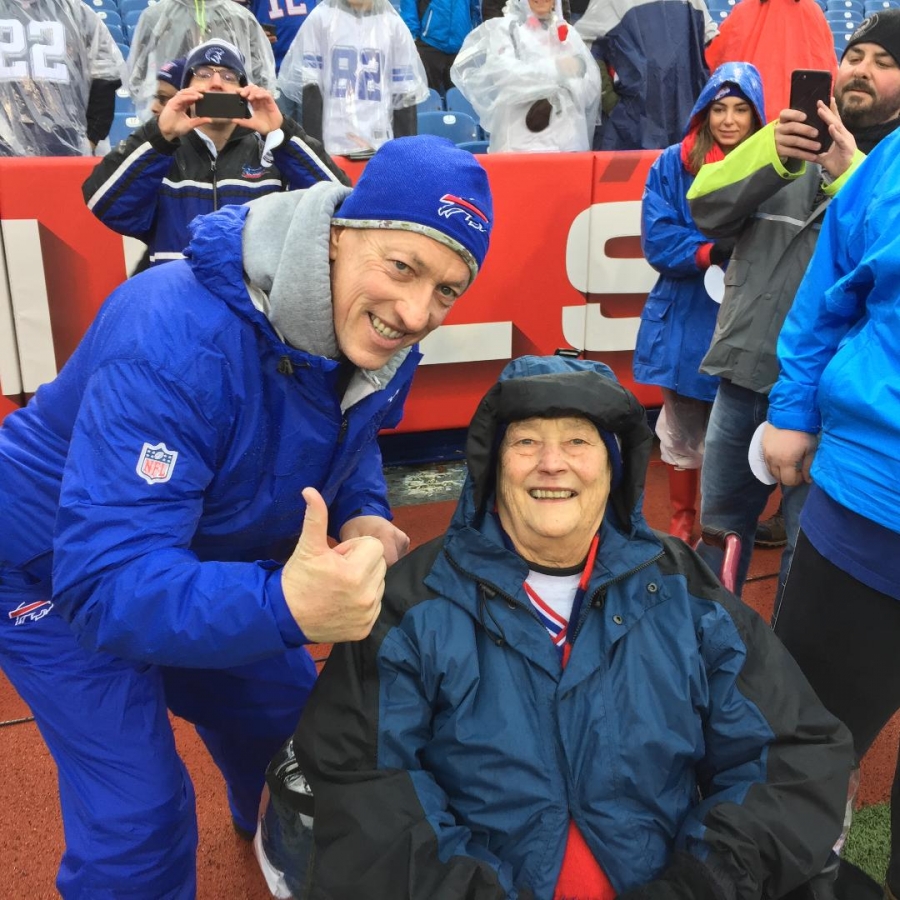