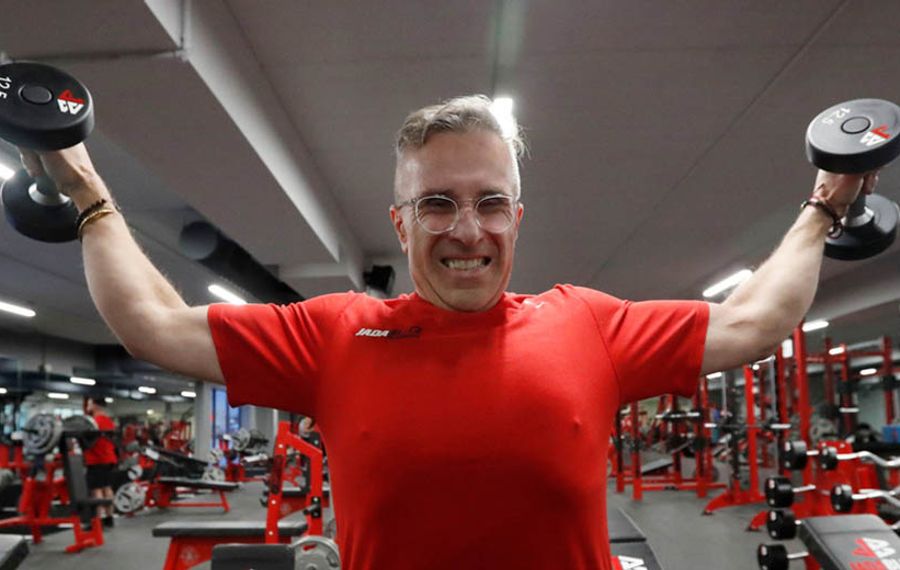 Persistence and understanding can help you boost the odds of following through on a resolution any time of year – including goals you make for the new year to improve your health and well-being.

A comprehensive approach also is key, according to three people who’ve successfully met goals so many of us would like to achieve.

A third stopped smoking – 36 years after she started.

It wasn’t enough to resolve to do those things. All three shared the key steps they took along the way. Get help. Share your goal with others, and welcome encouragement. Create, follow and track a plan. Treat setbacks as temporary – and get extra help and encouragement if they become more routine.

Each also underlined the reality of their successful resolve: Change is difficult and is a process, not an event.

“To invite change, specifically at a pace you can handle, your life will change,” said Marissa Biondolillo, who has learned to overcome stress that once overwhelmed her. “Positive change doesn't mean painless change, but it will be meaningful. If you think of what you want for yourself and you are willing to back it seriously, it can happen.” 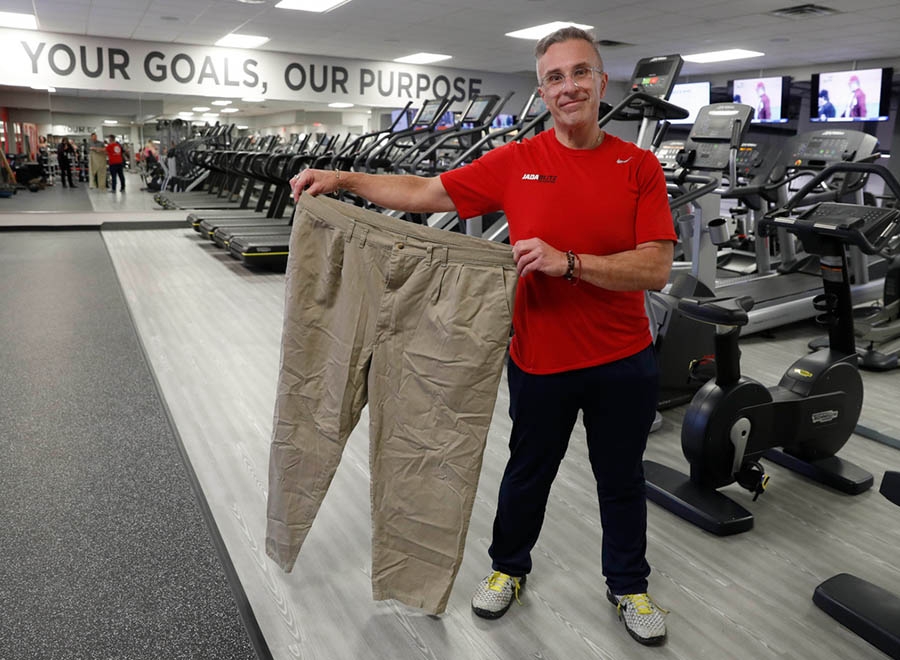 John Prisaznuk used to eat a fairly standard Buffalo diet before his weight climbed to 353 pounds. Last week to a workout at Jada Blitz Fitness in Clarence, he brought a pair of size 56-inch waist pants he used to wear. (Sharon Cantillon/Buffalo News)

John Prisaznuk was in a challenging marriage when he ramped up his desire to find comfort in a companion he had known since childhood.

Pasta and sugary treats that satisfied his sweet tooth also were routine fare.

He never thought much about exercise, either, not with a wife who had a serious mental illness, a busy teaching job at Cleveland Hill Middle School and three young kids at home.

The 5-foot-6 Prisaznuk wore pants with a 56-inch waist and weighed 353 pounds by late 2000, when he decided gastric bypass surgery was the best way to jump-start what he knew would be a massive undertaking: getting to a healthy weight.

“I couldn't move,” he said. “I couldn't climb stairs. I couldn't play with my kids. My classroom is on the third floor and I had a really hard time getting there. My blood pressure was high, and I was on a pill. I'm not anymore.”

He was able to maintain his weight loss but a busy life and his wife Beth’s progressively worsening bipolar disorder complicated matters. She died from the disease in early 2012.

Most members looked stronger, thinner and healthier than Prisaznuk. He was terrified. He still weighed about 250 pounds. He pushed through the fear of being imperfect with help from his trainers, Gaige Hoot and Adam Gutierrez.

Those in the fitness field have dedicated themselves to better health and want to share their knowledge without judging others, Hoot said.

“I think there is no better investment than investing in yourself, your health and wellness,” he said.

“I always eat protein first because that fills me up,” he said. “Then a mix of fruits and vegetables and healthy carbs. I love brown rice. I love jasmine rice. There's a grain called farro that was in one of the Balanced Body meals that I recently bought, then I found it at the Lexington Food Co-op.”

Prisaznuk finds the fitness part easier than the healthy eating part. He recently placed a greater emphasis on drinking 3 liters of water every day and weaning off Diet Coke. He also has learned that moderation is key.

“The food part is all about finding the right balance,” he said. “I'm not going to give up my dark chocolate but I’m going to eat only a little bit … not 29 pieces.”

His muscle mass has improved. He continues to add to his weight loss – and maintenance – repertoire.

He took his first high-intensity interval training class this week and recently took a Zumba class with Shahna Markman, his girlfriend of nearly a year. Both are committed to healthy habits, including long walks near Prisaznuk’s Cheektowaga home and in Delaware Park.

“If others think they can do it on their own, that’s great,” he added, “but if it was that easy, we wouldn’t have the obesity problem we have in the country. There are tons of resources out there, but you have to be patient with yourself and you have to know that it’s not going to be fast and it’s not going to always be easy. It gets easier over time, because you form habits.” 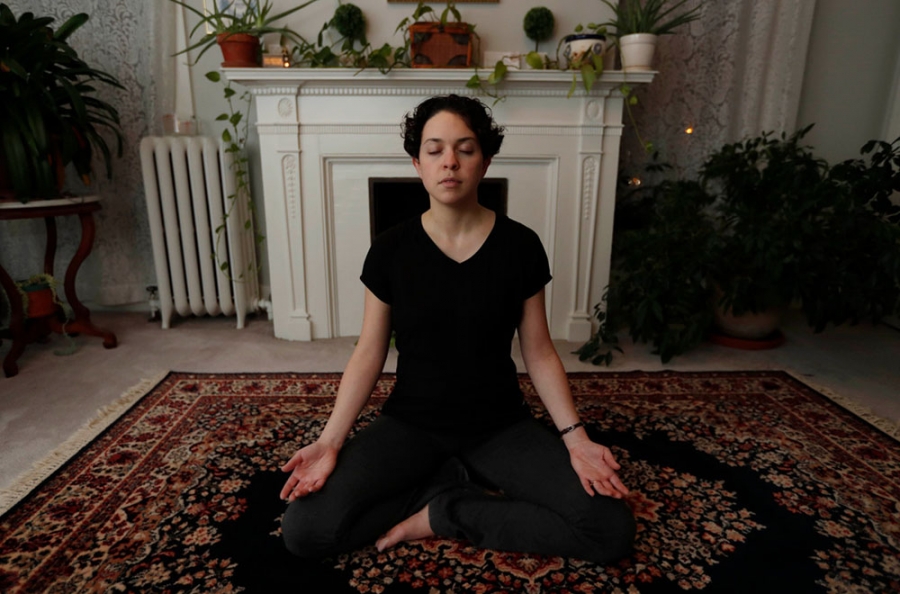 Marissa Biondolillo reduces stress by meditating regularly, including at the Himalayan Institute Buffalo, where she learned to become a yoga instructor. (Sharon Cantillon/Buffalo News)

Marissa Biondolillo was built for busyness.

She double-majored in sociology and women’s studies at William Smith College in the Finger Lakes before heading to Ithaca to forge a life filled with retail jobs, community theater and vague ideas about the future.

“I ran from my problems for a good amount of time,” said Biondolillo, 30, a Hamburg native who now lives in the Buffalo University Heights neighborhood.

She moved back to region about 3½ years ago, several months after a falling out with a creative organization in Central New York triggered crisis of confidence.

“I was used to stress, that constant spiraling of thoughts and the weight of things,” she said. “I knew how to handle it. But it came to a point where I just sort of froze. I couldn't make a decision. I couldn't get myself out of bed.”

Biondolillo decided in February 2016 to try new ways to break her rut. Friends suggested she start by taking a meditation class at an Ithaca integrative health clinic. She tried – and soon discovered that her goal to improve her mind should start with a focus on her body.

“Meditation taught me how to feel my body from the inside out,” she said, “and that, for me, was the shortcut to being present and being mindful.”

Biondolillo made a commitment to go to the meditation class at 6 p.m. each Monday. In the months to come, that changed to two weekly classes, then yoga.

Two books – “The Four Agreements,” by Don Miguel Ruiz; and “The Artist's Way,” by Julia Cameron – helped her gain understanding as she continued to add classes to her schedule. She saw a behavioral health counselor. She kept a journal to note when and how stress got the best of her.

She also used a smartphone app, Insight Timer, to assure that meditation would be part of each day, and if and when anxiety mounted.

“From there, the doors kept opening,” Biondolillo said.

She started acting in Shakespeare in the Park performances, joined the Ujima Company and acted with several other companies.

She and Benjamin Turchiarelli, a fellow part-time actor, got engaged. She also took the 200-hour yoga instructor training at Himalayan Institute Buffalo and started teaching, first to her mother, Annalise, and then to several of the parents of her former Hamburg High School friends.

These days, Biondolillo rarely fixates on things she wished hadn’t happened in her life, or lets her mind run through scenarios she fears will end badly.

The skills she learned through meditation and yoga – breathing exercises, stillness, the ability to control more of your body as the practices become meaningful parts of your life – have given her greater awareness.

“The whole point of mindfulness isn't just to notice things,” she added, “but to accept them.”

The process has helped her design a different future. She completed her first semester earlier this month toward her master’s degree at the University at Buffalo School of Social Work. She works part time as a mental health technician at BryLin Hospital. She continues to act.

“Now, when I'm teaching yoga and teaching lessons about mindfulness,” Biondolillo said, ‘I usually say, ‘Go to your senses. What do you feel is happening right now?’ If you develop that skill, it throws a spoke in the wheel of the stress and anxiety spiral.” 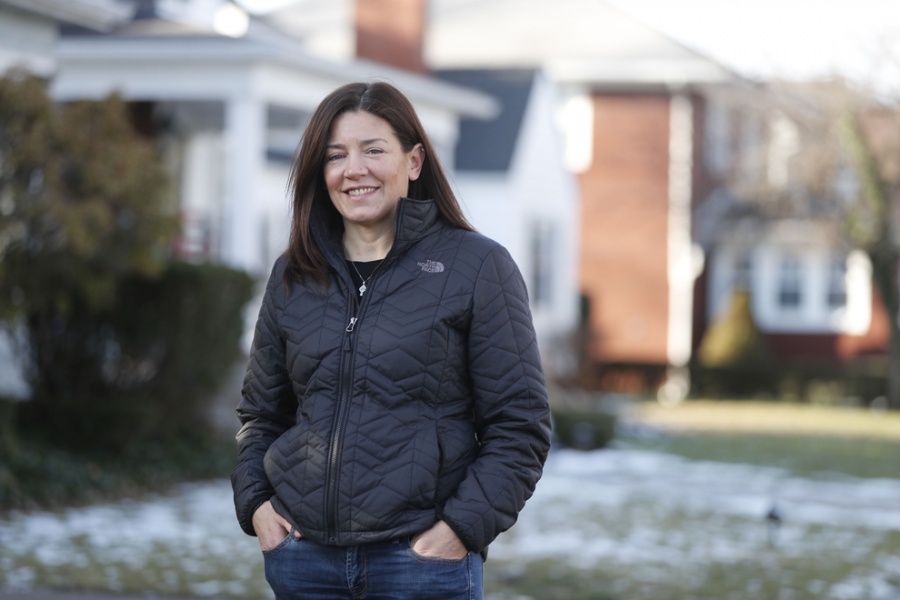 Registered nurse and former cigarette smoker Deborah Lipinski, 49, of Kenmore, who has worked out regularly and sold natural cleaning products for years, says its been easier to reconcile her choices since she quit smoking Jan. 31. (Mark Mulville/Buffalo News)

Deborah Lipinski used to be one of the nurses people see standing outside a hospital smoking a cigarette. The image – all too familiar and perplexing – is a testament to the power of nicotine.

Lipinski started smoking when she was 12. She quit several times during her life – including while she was pregnant with her four children, ages 7 to 17 – but kept returning to the deadly habit.

That changed last January, the week her mother was diagnosed with breast cancer.

“I needed to be done,” Lipinski said. “I wanted to be there to help my mother. I'm a nurse. I know that smoking is bad for you. I just needed to figure out how I was going to deal with stress differently.”

Lipinski, of Kenmore, has been a registered nurse almost all her adult life. She’s mostly worked in surgical settings and has seen the damage smoking has caused others. She has worked the last four years as a clinical auditor at Independent Health in Amherst, slipping out of the office at least once a day during the first three of those years for a mile-long round trip to Tim Horton’s. She told co-workers it was for coffee, too embarrassed to say she needed a smoking break.

During one of those breaks, she called the New York Smokers’ Quitline (nysmokefree.com; 866-697-8487) from the Tim Horton’s lobby.

Lipinski tried an oral medication in the late 1990s and quit for three years. She also tried vaping. “That didn’t work,” she said.

Checking in with a Quitline smoking cessation coach kept her accountable. So did tell friends and acquaintances she had quit. Some of her co-workers were shocked because she’d hidden her habit so effectively. She put an app, Smoke Free, on her smartphone, which reminds her about specific dangers of smoking, how long she’s been smoke-free and how much she’s saved since she quit.

Lipinski used nicotine patches that diminished in strength over about three months. Yoga, meditation and deep breathing have become healthy tools to ward off urges to smoke, which grew far less frequent as months passed.

“Honestly, I don't even think that that's going to be an issue at this point,” she said.

Her husband and kids are much happier and Lipinski no longer has to step outside her house or her office – including in the dead of winter – to light up. She’s also saved about $75 to $100 a month, and stopped visits to Native American territory to buy cheaper cigarettes to support her half- to full-pack-a-day addiction.

Her mother, Sharon Rott, is now cancer-free, and taking steps to help her stay that way.

Lipinski is nicotine-free. She said a life without cigarettes fits much more comfortably into a life that also includes a career in health care, her Beach Body on Demand workouts and her side job selling Norwex.

“Norwex is a microfiber way of cleaning to get rid of the chemicals in your home,” she said, “and so here I was telling people to get the chemicals out of their home yet I'm smoking. It just didn't make sense.”

It took Lipinski several times to stop smoking, so her final message to others who still do is to keep trying to quit. It's worth it.