'Twas the day after Christmas,
And all through the Rockpile,
All the Bills fans were stirring
In their seats aisle by aisle.

When out on the turf
There arose such a clatter
At the sight of a Charger
Left flatter than flatter.

'Twas a tackle dished out
By the peerless Mike Stratton —
A hit heard ’round the world!
(Not just ’round Manhattan.)

Lying flat on the field
Was the speedy Keith Lincoln:
Soon the Bills would be champs!
(Now let THAT fact sink in.)

'Twas the day after Christmas,
Nineteen-Sixty-Four:
A date to remember
In pro football folklore.

The Bills trailed 7-0 in the 1964 American Football League championship game at War Memorial Stadium when Stratton’s perfectly timed tackle knocked the wind out of Lincoln and the Chargers. The Bills went on to win that game, 20-7. A year later, they’d beat the Chargers 23-0 in the 1965 title game in San Diego.

That’s 43-0 over two title games across two seasons following one hit. It’s not too much to think that its impact could still be felt a full year later. Heck, echoes of it can still be heard around Buffalo more than five decades on.

Stratton, for one, is stunned that one tackle is still be celebrated a lifetime later.

“It greatly surprises me,” he says by phone from his home near Knoxville, Tenn. “I feel honored and blessed by it. It certainly has had a life of its own.”

Erik Brady
Is the White House in Buffalo's future? On HBO, it is.

If you thought Deion Sanders was amazing, you never heard of Luke Urban

He didn’t recall that the hit came on the day after Christmas.

“I think of it as the championship game, and that’s really all,” Stratton says. “If you had asked me at the beginning what day that happened, I couldn’t have told you.”

Usually when football plays get their own nicknames — think Immaculate Reception or (heaven forbid) Music City Miracle — they occur toward the end of big games. Stratton’s tackle came in the first quarter.

Its nickname — the Hit Heard ’Round the World — is modeled after baseball’s Shot Heard Round the World, which was itself taken from Ralph Waldo Emerson’s poetic take on the opening salvo of the Revolutionary War.

Baseball’s version came 13 years before Stratton’s. Bobby Thompson hit a historic home run against Ralph Branca that gave the New York Giants the 1951 National League pennant in a playoff against the Brooklyn Dodgers.

Thompson and Branca, over the years, made a cottage industry of their mutual moment, often appearing at autograph shows and banquets. Stratton and Lincoln had only one such dual appearance; it came at a Bills alumni event in 2011.

The Bills got Lincoln in a trade in 1967, and he and Stratton studiously avoided talking about the hit when they were teammates in 1967 and 1968. But at the 2011 event, they signed photos of the play, which sold for $99 to benefit the Wounded Warriors Project.

Paul Maguire, the former Bills punter and linebacker, was emcee of the alumni event and got the two men on stage to talk about the play that pairs them in posterity.

“I asked Keith the obvious question: ‘How did you feel after that hit?’ ” Maguire says. “And he just said, ‘I was in a whole lot of pain!’ ”

Stratton, who is 78, can still see that tackle in the replay machine of his mind. He was backing up to cover a curl-in by a wide receiver when he saw Lincoln open in the flat.

A year earlier, Lincoln had turned one of the greatest championship game performances in pro football history: 206 yards rushing on just 13 carries plus 123 yards receiving and — the cherry on top — 20 yards passing on a halfback option. That added up to 349 all-purpose yards in the Chargers’ 51-10 win against the Boston Patriots in the 1963 AFL title game.

Then, on the first play from scrimmage of the 1964 title game, Lincoln ripped off a run of 38 yards to set up the Chargers’ first touchdown. That was the context when San Diego quarterback Tobin Rote threw that fated swing pass to Lincoln in the left flat. 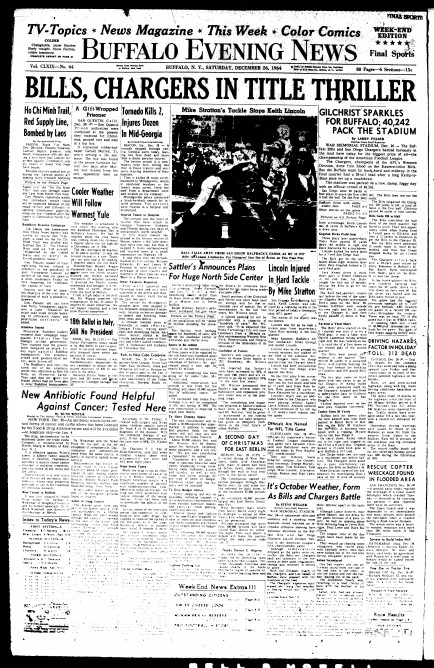 Stratton arrived at the same instant as the ball and he hit Lincoln in the midsection with his right shoulder. If he’d arrived a moment sooner, Stratton says, it would’ve been pass interference — or, a moment later, a long gainer. As it was, the pass fell incomplete. Stratton got up; Lincoln didn’t, for several long minutes.

History shows the Chargers’ spirit was broken, along with Lincoln’s ribs.

“It was brutal,” Maguire says, “just a perfect tackle.”

Lincoln died over the summer of congestive heart failure. He was 80.

“That put a long face on me,” Stratton says.

Lincoln talked to the Spokesman-Review in Spokane, Wash., for a 1995 story. It was mostly about his brilliant career at Washington State, but the story also made mention of his bravura performance in the 1963 AFL title game — and the 1964 Hit Heard ’Round the World.

“Buffalo still loves that hit,” Lincoln said with a laugh, according to the story. “They say it’s one of the top plays in the history of the franchise.”

That it is. And now, after all these years, Stratton is reminded that it came on the day after Christmas.

50 years ago, the Bills won it all