ALBANY – New York State had lined itself up to become a key player among states jockeying to lure automakers and high-technology companies engaged in developing and conducting real-life experiments with driverless vehicles.

So far, it’s been a bust, and auto industry executives say a half-dozen or so other states have whizzed past New York to embrace what the industry calls autonomous vehicles.

The reasons? Like autonomous vehicles, they are complicated, but mainly boil down to two explanations: a test-drive law that’s not working and a 52-year-old law meant to improve safety on New York roads.

First, from the industry’s perspective, an existing autonomous vehicle road testing state law contains enough uncertainties and regulatory hoops that a chilling effect has been created. As a result, only two car companies have signed up with the state Division of Motor Vehicles to have a driverless vehicle operate – briefly – in the state since the testing law was adopted 33 months ago.

Both of those applications – by Audi and Cadillac – did not involve anything close to rigorous testing. They instead were public relations efforts lasting only a couple of hours designed to showcase their fledgling products to politicians in Albany and media in Manhattan within a few months of the 2017 law being signed by Gov. Andrew M. Cuomo.

The autonomous testing law is not permanent. It was to expire this year, but Cuomo and lawmakers extended it in April until 2021. The sunset provisions have played into whether automakers and tech companies such as Google and Apple – which have their own autonomous vehicle programs – have not rushed to test their products in the Empire State.

Buffalo officials plan for a future where cars drive themselves

“This uncertainty is a strong disincentive to any company that’s thinking of setting up a testing program, and the jobs that come with it, in a state," said Wade Newton, a spokesman for the Alliance of Automobile Manufacturers, a Washington, D.C.-based trade group that represents the major domestic and foreign car makers that sell three-quarters of the cars in the United States.

New York also requires autonomous vehicles to have a State Police escort – with a hefty hourly and per mile rate – and a $5 million insurance policy and agree to provide, in advance, specific routes that will be tested.

“But it’s more than just any one requirement. Testers want to feel welcomed, and when testing programs are full of hoops to jump through and administrative hurdles to navigate, it just kind of sends a message to the tester that they are not as welcomed there," Newton added.

While there are plenty of cases where autonomous vehicles are on roadways in some manner or another around the world, the industry is a long way from having a driverless vehicle navigating the Thruway or back country roads in upstate.

Still, the lethargy shown by automakers about testing in New York comes from the second big reason: the "one-hand-on-the-wheel" law.

That is the 1967 statute, pushed for obvious safety reasons, requiring drivers to always have at least one hand on the steering wheel when a vehicle is in motion. Today, it is the only one like it in the nation.

Autonomous car testing in the state can be done hands-free by licensed testers who are required to physically be in such vehicles during their experiments, but the one-hand-on-the-wheel law sends a chilling effect to car makers about New York’s autonomous intentions.

It is just one reason why states like Michigan, California, Pennsylvania, Texas, Nebraska and others are seen as far more aggressive in attracting the autonomous industry.

Brad Stertz, director of government affairs for Audi, which brought one of its driverless cars to the state Capitol in 2017 for a show-and-tell demonstration, said the automaker is encouraged by autonomous research being done at places like the University at Buffalo, Syracuse University and the Rochester Institute of Technology. But Stertz said "meaningful development" has been blocked by the law.

New York limits autonomous vehicle testing to carmakers that get approved by the state DMV. The last approved such test was Sept. 25, 2017, by Cadillac, which showcased an autonomous model on a drive across the country that began in Manhattan.

Autonomous vehicles are being routinely driven, however, at UB’s North Campus and at the Brooklyn Navy Yard, where driverless cars on a continuous loop transport passengers from a ferry stop. 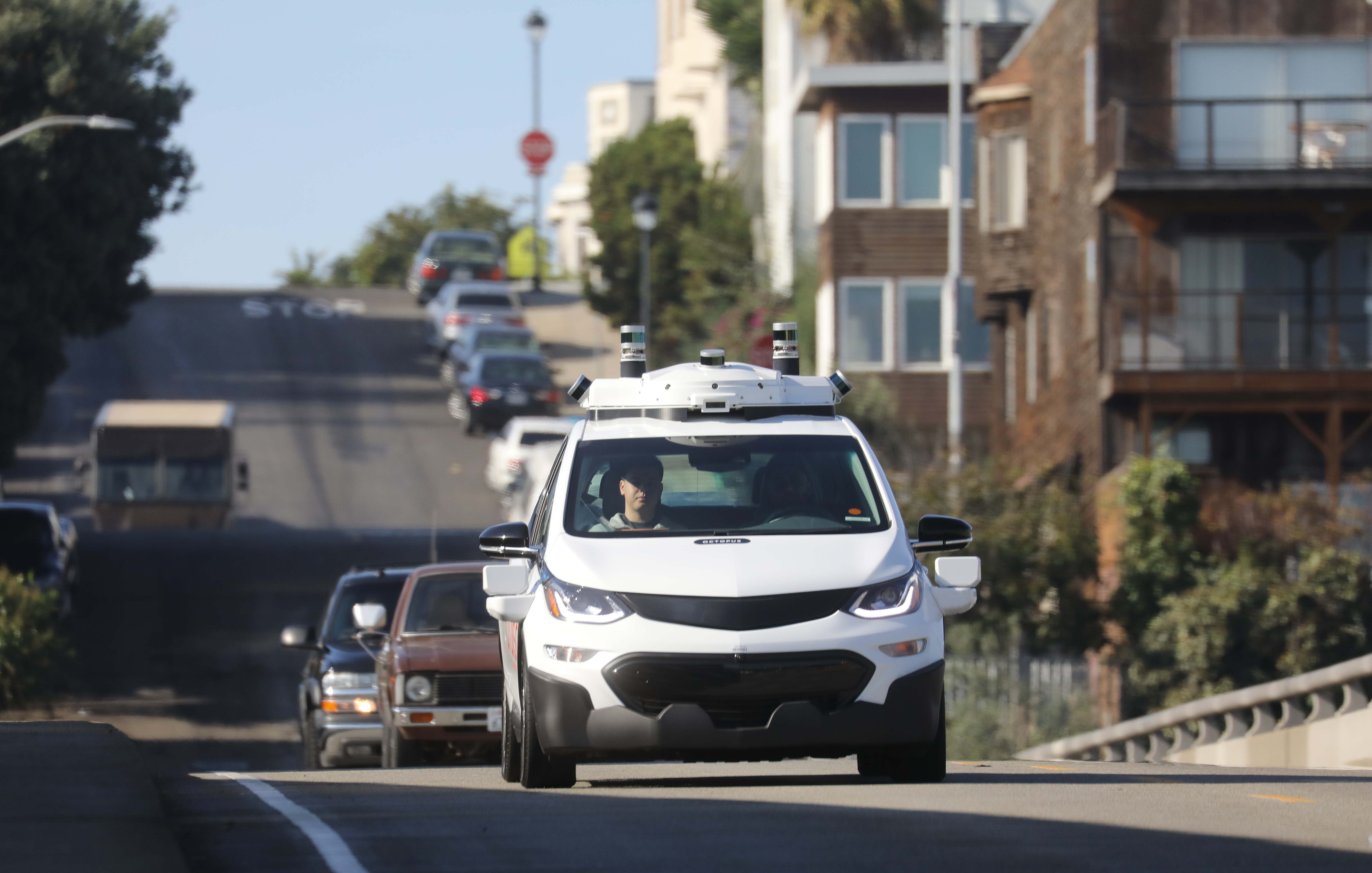 Tim O’Brien, a DMV spokesman, said the agency is not aware how those two testing programs are being run because they are not part of the DMV’s pilot program.

UB is able to bypass the DMV requirements because, a university spokesman said, the two autonomous vehicles on campus operate on what are considered private roadways and parking lots and the vehicles do not transport students or faculty but contain only researchers running experiments.

Asked if the Cuomo administration has a position on what might be needed to encourage more autonomous testing, O’Brien said: “We are committed to being as open to testing autonomous vehicles on public roadways as may be permitted under New York State Law."

One influential state lawmaker who helps make transportation laws is in no rush to relax autonomous driving rules. “There’s this cautiousness that we are trying to maintain as far as the safety of the public is concerned. That’s where we are. I don’t feel a real push to get rid of the one-hand-on-the-wheel law," said Assemblyman William Magnarelli, a Syracuse Democrat who heads the Assembly’s transportation committee.

The lawmaker made it clear automakers will be disappointed if they are seeking some major changes to laws governing autonomous vehicles in New York.

“I do believe the technology will be perfected in years to come. That’s not a question in my mind. The question is do we want New Yorkers to be the subject of those tests, and the answer is no. Not that we don’t want them, but we want precautions as well," he said.

Magnarelli was unfazed that automakers go to other states to test their products because the products – autonomous cars – will still have a big market in New York once the technology is perfected, he said.

Nine different bills were introduced in 2019 pertaining in one way or another to driverless vehicles. All of them died in the session that ended in June. Several involved setting up task force panels to study the various issues – a route that seems the most plausible in 2020.

Another bill would have relaxed rules affecting autonomous vehicles; that was only introduced in the Assembly and went nowhere. A bill providing for a study to possibly expand UB’s existing autonomous program beyond the campus to allow vehicles to travel on nearby Amherst streets – introduced by Democrats Senator Tim Kennedy of Buffalo and Assemblywoman Karen McMahon of Amherst – did not make it to the floor in either house.

There also was a bill, records show, called the “Save Our Jobs Act of 2019” – which called for a study to look at the impact autonomous trucks will have on trucking jobs. It went nowhere, too.

Tracking or lobbying on one or more of those bills, according to state lobbying records, was an assortment of interests: Toyota, Volkswagen, an insurance trade group, the big automaker trade group in Washington, the AFL-CIO, Farm Bureau, trial lawyers and auto dealers.

Kennedy, who heads the Senate transportation committee, said a balancing act is underway with the autonomous industry. Like Magnarelli, he raised public safety issues. “There’s certainly concerns about the safety of the technology. Our roads are general usage and when and if (autonomous) is implemented manufacturers have to be held to the same safety standards across the board," he said.

As for changing the one-hand-on-the-wheel law, he said: “There’s a fine line between advancing the technology and ensuring the public safety, and public safety comes first and foremost.’’

“Up to this point, New York State has lagged behind in the advance of autonomous research and development. My goal … is to allow for more research of this technology," Kennedy said.

Public safety will guide whatever steps lawmakers may take in 2020 with autonomous vehicle matters, lawmakers say. “But I believe we have to move quickly because we don’t want to fall behind other states,’’ Kennedy said.