In single-digit January temperatures, a pipe burst on the third floor of its Civil War-era building on Ellicott Street. Water cascaded through to the basement. Anti-mold efforts and renovations, including refinished floors, new furniture and a new first-floor bar top, shut down the operation – and cash flow – for two weeks. In October, Joseph Fenush left. He had led the kitchen from its 2015 opening, translating local vegetables and fruits into soulful, many-layered specials.

On Dec. 4, the building next door was condemned. Toutant closed while its neighbor was pulverized and hauled away. Five days later, I arrived for dinner, not knowing what to expect. But Toutant was not knocked off stride. From still-crackling pork rinds with pimento cheese to a dazzling rethinking of bananas Foster, Toutant has earned its place as a must-see Buffalo restaurant by delivering pitch-perfect Southern classics, elevated local produce and creative reimagining of dishes you know by heart.

Chef-owner James Roberts, who spotted me before the first plate, noted one bright side to the recent turmoil: post-demolition, his place has more tables with views of the Electric Tower.

Otherwise, Roberts has the place humming. Russ Whitfield, another original Toutant cook, is the new chef de cuisine, responsible for dishes such as Oles Farm carrots roasted and dressed in charred preserved green bean vinaigrette. Earthy roots with a punch of miso-like umami showed that the Toutant commitment to taking vegetables seriously continues.

More Oles Farm produce, asparagus, was pickled while plentiful this spring. With the snow flying, Whitfield is charring that asparagus and presenting it as a salad ($8), tumbled with smoked oyster mushrooms and over fresh housemade cheese, pointed up with a sauce husky with smoked (aquatic) oysters. 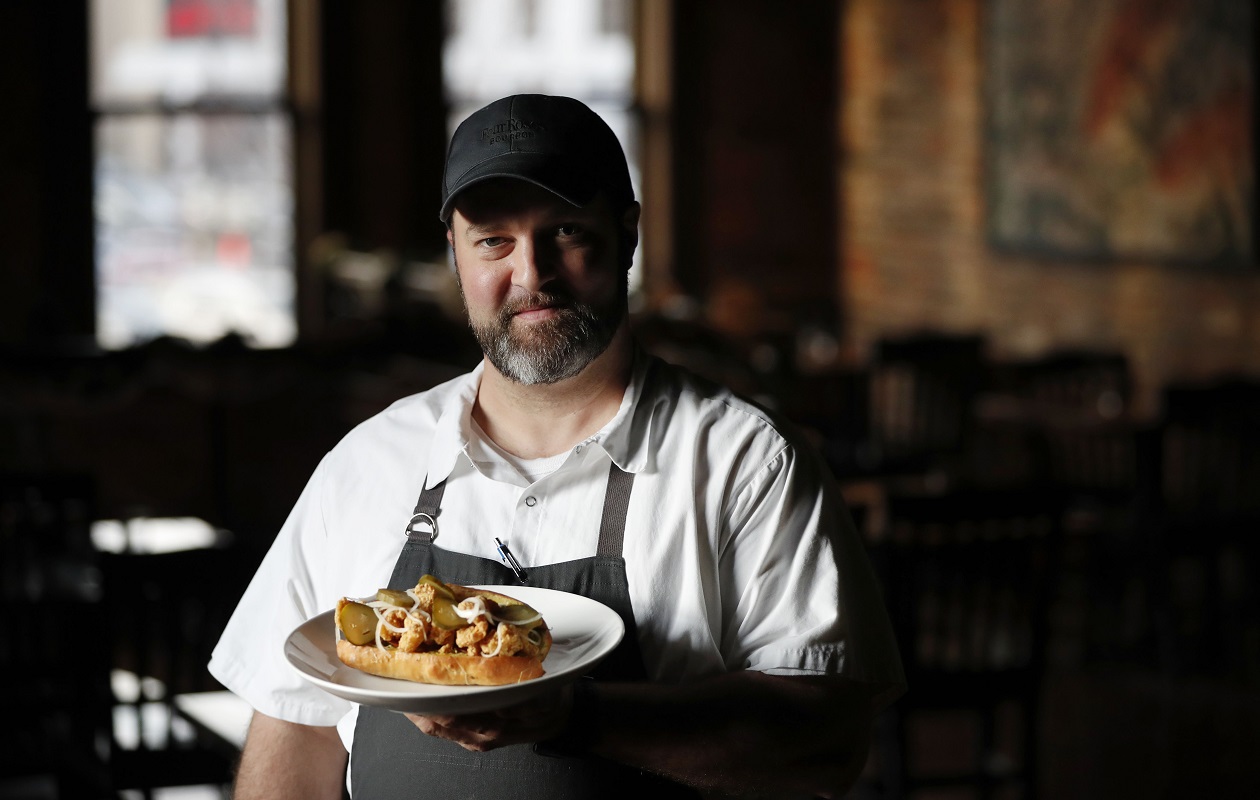 That’s a lot of work for an $8 dish. Toutant’s scratch kitchen roots run deep, contributing to some of its more extraordinary achievements.

Honey cornbread ($8) is baked to order from custom-blended cornmeal from two organic producers and is used as a fried shrimp coating and thickener in other dishes, leaving them all gluten-free. (The menu’s gluten-sensitive dishes are abundant and clearly marked.)

The house-baked po’boy rolls have a crackling surface and feathery insides that I have not seen outside of New Orleans and your better banh mi parlors. The shrimp po’boy ($16) loads a split roll with fat fried shrimp, housemade pickles, onions, tomato and just enough mayonnaise for a triumph of texture and flavor. 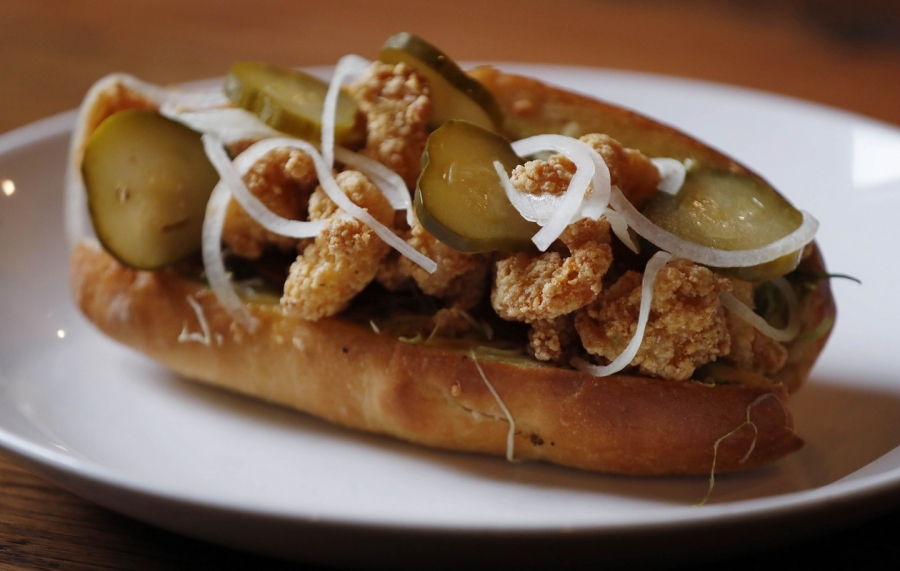 Grits are imported from a third source in South Carolina. My attention was drawn to their swoonfully resonant corn flavor in the catfish sauce piquant ($25), which is a thick tomato-based sauce alive with chile and diced bell pepper over a pan-sauteed catfish filet.

Sausage of the week ($12) is housemade, a perennial order. This one was smoked kielbasa, served with a sweet-and-sour Oles Farm squash agrodolce, flavored with housemade grapefruit preserve.

Pork rinds are fried to order and arrived still crackling. If you’ve never had pimiento cheese — a mixture of cheddar, mayonnaise, roasted sweet pimiento peppers, and more — get some with your pork rinds and learn why so many Southerners swear by the stuff.

Toutant’s take on Nashville chicken ($16) uses boneless thigh instead of bone-in chicken, but I can’t argue with the crunchy, moist-centered results. I would eat the sauce on copier paper. Slightly sweet, moderately spicy, suffused with the toasty flavor of browned chicken skin, it soaks into the slab of pickle-brine white bread underneath. 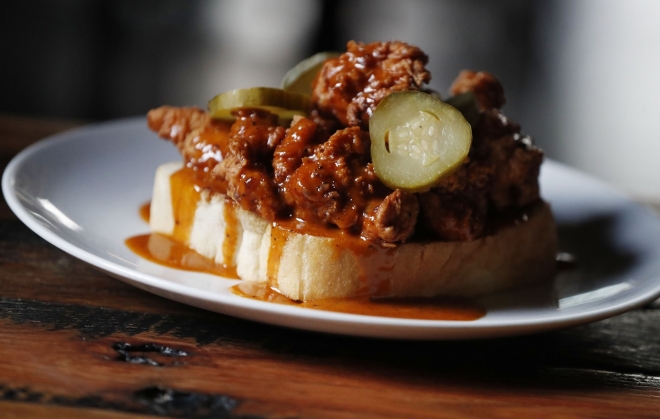 Steak lovers should note the Nieman Ranch ribeye ($34). It's nearly a pound of beef charred over applewood smoke and brushed with bourbon butter, served with smashed potatoes and vegetable of the day.

A limited late-night menu is offered after 10 p.m. On Sundays, brunch features shrimp and grits ($18), an outstanding chicken-fried steak and eggs ($16), and an overnight yeast waffle ($10) worth prying yourself out of bed.

The bar offers the full food menu, and a full suite of classic and custom cocktails, with housemade spins on New Orleans specialties like the Sazerac and frozen daiquiri ($10).

Service was friendly but polished, our server swapping out silverware and wiping the table between courses while chatting. A request for hot sauce brought two Toutant originals, Loup Garou, a jalapeno-and-citrus-centric heater, and Suzumebachi, a drop-at-a-time edible nitroglycerine. 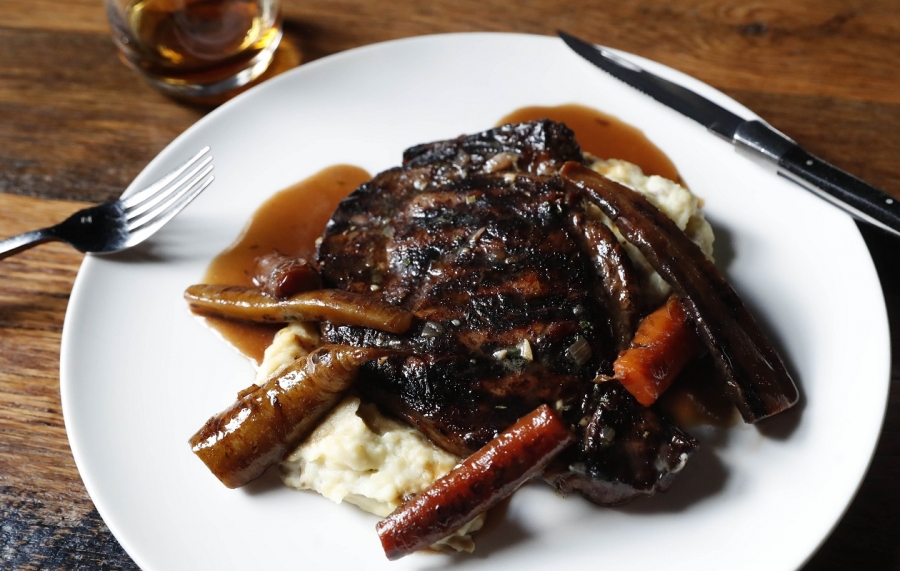 The star dessert was an ingenious bananas Foster upgrade ($8) that bridges the gap to banana pudding. A roasted banana semifreddo – an airy frozen confection doled out by the thick slice – was joined with disks of caramelized banana and housemade vanilla wafers in a rum caramel sauce. It was everything I love about bananas Foster, but better.

The one downside to the place is its ancient, elevator-less frame. There are limited seats on the first floor, so if you can’t climb stairs, make that clear at reservation.

In four years, Toutant has proven that a restaurant can become a can’t-miss Buffalo spot – and contribute to the city’s rise as a haven for food tourists – without selling a single chicken wing. 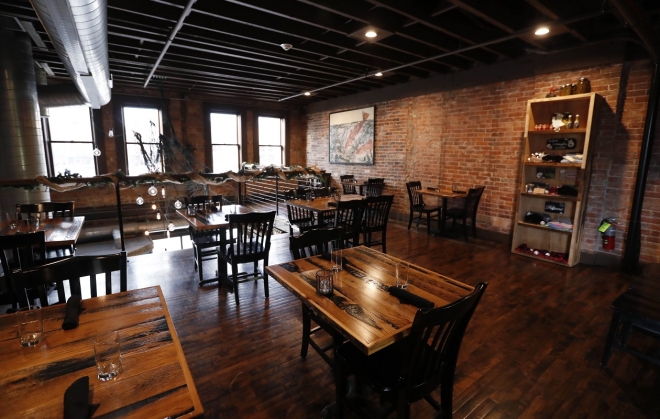