As a 23-year-old Army nurse just three years out of school, Mildred Speers danced with the French in the streets of Paris to celebrate the end of World War II.

“We French will never forget what those men and women did — what you did — to restore our freedom,” Soarès said.

“I want to pay a special tribute to Madame Mildred Speers, a nurse who, more than 70 years ago, risked her young life for the freedom of France and Europe,” he added.

Speers, then known as Mildred Budimirovich, served as a first lieutenant during World War II. The Lackawanna native enlisted as an army nurse in 1943 and deployed to Europe with the 96th Evacuation Hospital Unit soon after, landing at Normandy’s Utah Beach in June 1944. Speers went on to triage and stabilize wounded soldiers in a string of major battles, from the invasion of Normandy to the Battle of the Bulge.

Medical personnel themselves also became targets. In July 1944, as Speers’ unit began moving south through France, bombs dropped on the nurses’ quarters -- though no one was injured in the attack.

Five months later, at another posting, the unit was warned the Germans planned to bomb them — giving Speers and her fellow nurses an hour to evacuate their patients.

By the time the war ended in 1945, the 96th Evacuation Hospital Unit had handled almost a quarter of all American First Army casualties during World War II, according to statistics compiled by Rep. Brian Higgins’ office. Even then, Speers stayed on for another four months to provide medical care to displaced civilians.

“I know that she's honored. She was honored to serve,” Speers’ son Craig said during Monday’s event. “And she always told me that at the 96 they treated all people from all nationalities with equal care — everybody received outstanding care. And for that, I think they deserve a lot of credit.” 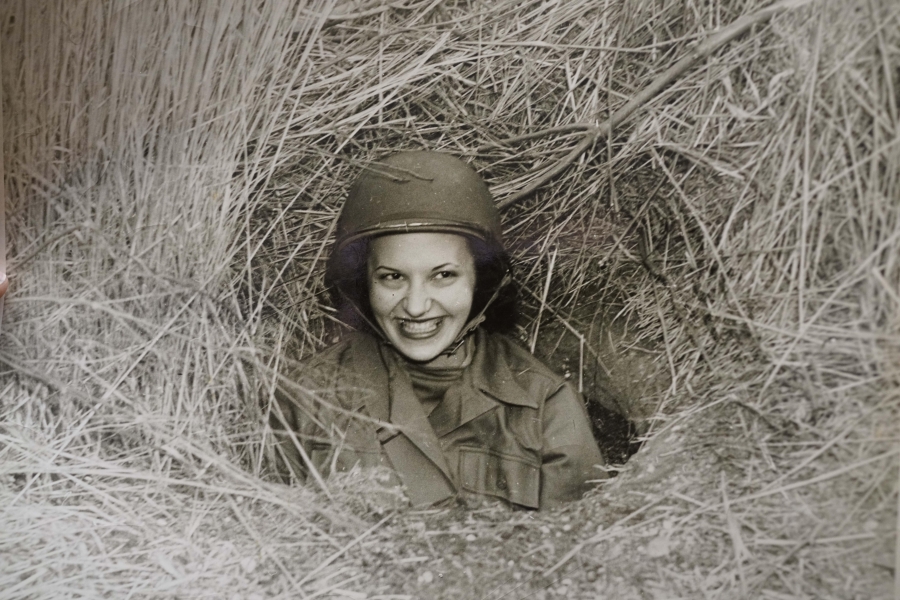 A family photograph of U.S. Army nurse Mildred Speers, then known as Mildred Budimirovich, in a foxhole in France during World War II. (Courtesy of the Speers family)

But Speers’ service almost went unrecognized, said Walter Koch, a senior caseworker for Rep. Higgins who assisted with Speers’ application paperwork. World War II veterans often don’t realize they’re eligible for honors like the one Speers received, Koch said, in part because many such awards were created in the decades after “the greatest generation” returned to their lives as civilians.

Speers, for her part, returned home in 1946, married and went to work. (Her husband, Harold, served in the South Pacific and got home first.) Speers went on to a 37-year career at Millard Fillmore Hospital before retiring in 1985. She now lives in the Blocher Homes nursing home, where Monday’s ceremony was held in a crowded second-floor auditorium.

A small woman in a white-and-black striped sweater, Speers sat stoically beside a display of old photographs while Higgins and Soarès lauded her service. As honorary consul, Soarès serves as the French government’s representative in Buffalo, and the Legion of Honor is France’s highest military decoration, typically awarded in the U.S. to veterans who fought for the country’s liberation. On Friday, Soarès also awarded the Legion of Honor to 95-year-old Charlie Brown of Olean.

In addition to the French honor, Speers received a number of American medals, including the Honorable Service Lapel Button WWII, the World War II Victory Medal, and the European-African-Middle Eastern Campaign Medal with a Silver Star attachment.

Greeting friends and family members after the ceremony, Speers said she felt both “good” and overwhelmed.

“I was floored by all the people,” she said. “I really didn’t expect all this.”

A story and headline that appeared in Tuesday’s City & Region section misstated the number of casualties handled by the 96th Evacuation Hospital Unit during World War II. The unit handled almost a quarter of all American First Army casualties during the war.