It's possible you'll want to spend every waking moment around family during Christmas week. But that kind of commitment is certainly not for everyone, so a small but plucky group of events can provide an escape from political debates, burnt cookies and out-of-town Grinches.

Once presents are opened and Christmas morning traditions are complete, sometimes people get bored. One antidote for that feeling is MNM Presents' annual Christmas Party, with four floors of electronic dance music and silent disco.

Buffalo expat Grabbitz is home for the holidays to headline the party, and the full music lineup is robust.

[Photos: Smiles at the Christmas Party 2018]

The entire day is dedicated to "Seinfeld," with two rounds of intense trivia preceding the official party. DJ Cutler, who will go by the moniker DJ Puffy Shirt for one night only, will spin some alt carols, with frequent intermissions for public airings of grievances.

Feats of strength will have a decidedly German theme: a stein-hoisting contest. Below is a look from last year's unadorned Festivus pole, which will again be unadorned. 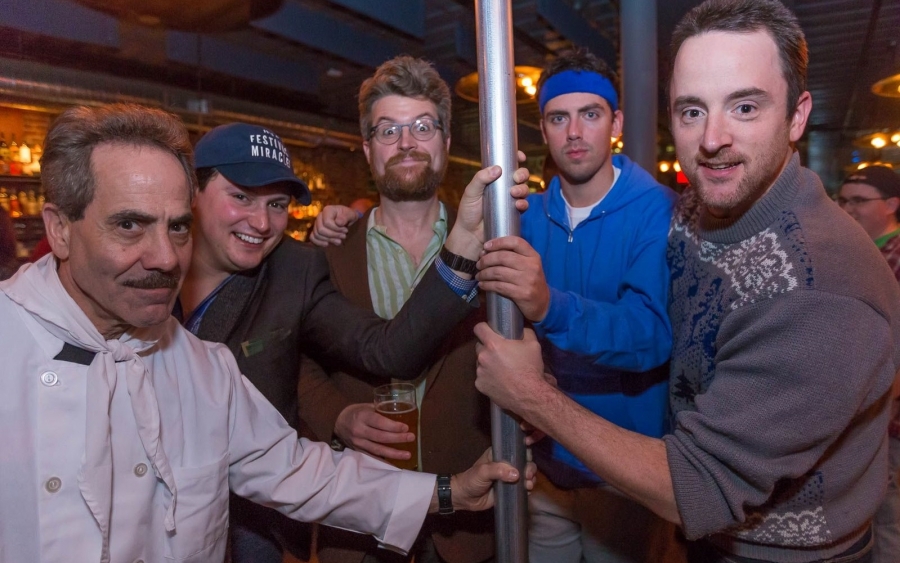 Festivus organizers pose around the unadorned pole in 2018. (Don Nieman/Special to The News)

Christmas Eve Day is the fifth and final time this season that Santa plops down at the Ice at Canalside. Before he packs his sleigh with magical efficiency, he'll oversee the skating, ice bikes, bumper cars and curling – and he might even hang out in your private igloo (although these are not free).

[Feature: How Canalside, once a wasteland, became Buffalo's pride]

Nothing says Christmas Night like a fiddle, mandolin and banjo. Leave the house with friends for a free Allentown show by the Erie Lackawanna Railroad, a local group that will roll through an acoustic bluegrass set.

Actor-musician extraordinaire Joe Donohue III – part of ELR himself – extends the night with Christmas carols on the piano, providing a melodic cap to Christmas Day.

Quebecois DJ Snails delivers a genre of music he dubs "vomitstep," which might be as grotesque as his stage name. (It's a blend of trap and dubstep that features "guttural bass gurgles," which sounds lovely).

But Snail-heads are plentiful, a new holographic stage is in tow, and he's decided to return to the same venue three of the last four years, so something is working.

Jaunt to the shores of the Erie Canal for a holiday gathering in Remington Tavern, with music by Buffalo Music Hall of Famer Geno McManus and friends, photo ops with Santa Claus and happy hour specials. Check out photos from Remington's party last year.

Indulge in holiday banter while enjoying drink and shot specials alongside complimentary hors d'oeuvres. Take in the tail end of Soho's 20th anniversary year, and look back at Smiles from that milestone summer party.

GRAB BAG OF OTHER CHOICES

SOLD OUT: The Strictly Hip – for the second straight year – at Hamburg Brewing.

BONUS TIP: Intersection Cafe, at the foot of Elmwood, is one of the few local coffee shops open on Christmas Day.

5 TO LOOK FORWARD TO THIS WEEKEND