The light-filled space at 612 Northland Ave., for now a temporary location on the fast-growing Northland campus, lacks a temperature- and humidity-controlled environment for preserving the seminal works of art in the Albright-Knox's collection. Plus, the sun's rays streaming through the windows could also do harm.

The Albright-Knox Northland location is a different experience.

The 130-feet-long and 62-feet-wide exhibition space – with numerous translucent wall panels, concrete floor, exposed brick walls and 24-foot-tall ceiling – offers an industrial ambience. It will host continuing exhibitions and other programming at least until 2022 as the Elmwood Avenue museum undergoes a $165 million expansion.

"The windows are phenomenal," Maria Morreale, the museum's communications director, said of the 8,060-square-foot exhibition space. "There is so much light in here. It's a big space that allows us to do a lot, particularly in terms of programming."

Admission to Albright-Knox Northland will be pay what you wish, Morreale said.

While most of the Albright-Knox staff is now housed in Clifton Hall on Elmwood Avenue, guest services staff and and security will be on site at Northland. 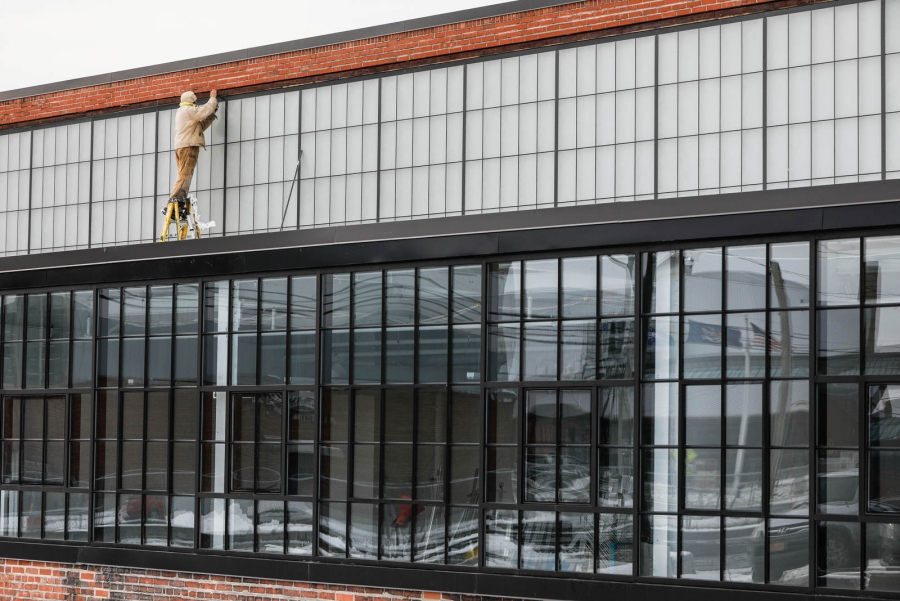 A worker puts the finishing touches on a bank of exterior windows at the new Albright-Knox Northland space. (Derek Gee/Buffalo News)

The building, a former Houdaille Industries plant where workers once made shock absorbers for trains and automobiles, opens on Jan. 17.

The Albright-Knox began moving into the Northland site this month after signing a three-year lease with the Buffalo Urban Development Corp. with an option to stay longer.

"Quite honestly, we just don't know what will happen at this point," Morreale said. "But they had this building, they needed a tenant for it and they showed it to us, and it was perfect.

"The location is great here, right off the 33," Morreale said, referring to the Kensington Expressway. "It's a very convenient spot for everyone in the city, and it's very walkable for the neighborhood."

"They have made a good amount of investment of their own money into the space, and we would love to have them stay," Cammarata said. "I think the idea of having a satellite on the East Side holds true even when they reopen."

The two airy, light-filled classrooms are a big upgrade from the windowless basement rooms used in the 1905 building, Morreale said. Easels for painting and drawing classes, kid-sized chairs, a kiln and supply cabinets beginning to be stocked were evidence on a recent day of what's to come when Albright-Knox Northland opens in little more than three weeks.

A loading dock on the building's west side helped seal the deal.

"That is part of what made this space so perfect for what we want to do with it," Morreale said. "It allows us to load big works of art."

An exterior sign for the museum will be erected a few days before the museum's opening.

The opening for museum members and neighbors – featuring the exhibit "Open House: Domestic Thresholds," by Heather Hart, Edra Soto and Rodney Taylor – will be held at 5 p.m. on Jan. 15. The public opening will be from 5 to 7 p.m. on Jan. 17.

As part of the exhibit, museumgoers will be encouraged to climb on top of and underneath Hart's life-size rooftop construction, loosely based on her childhood home. Performances, discussions and other events surrounding the interactive sculpture will occur until its closing on April 12. 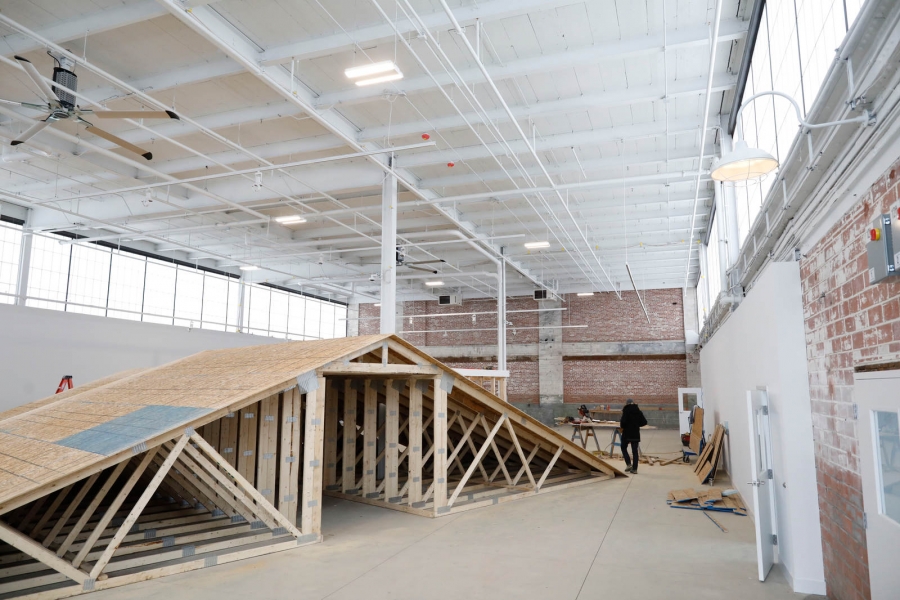 A large installation by artist Heather Hart is under construction in the new Albright-Knox Northland space that will open next month. (Derek Gee/Buffalo News)

Annette Daniels Taylor, an artist, writer and poet, will join the museum's Deputy Director Joe Lin-Hill to discuss the work of Taylor, a Buffalo artist who died earlier this month. The Sunday Insights gallery talk will be at 2:30 p.m. on Feb. 23.

A number of other cultural activities are planned during the exhibition, including a performance of "The Gospel at Colonus" by Ujima Company.

The Northland campus, with extensive investment from New York State, opened a 250,000-square-foot building at 683 Northland in September 2018. The first tenant in the former tool works building was Northland Workforce Training Center. Buffalo Manufacturing Works became the second tenant this past September when it moved into the rear of the building.

Albright-Knox Northland marks the second building being used on the campus, which was last used for storage in 2014 when the city's nonprofit development agency purchased it. It now fronts Northland Avenue after being relegated to the back portion of the former industrial plant.

Cammarata praised the museum for working closely with the local community.

"The most impressive thing for me with them has been the way they have really integrated themselves into the neighborhood," Cammarata said.

He said museum officials have worked closely with the Northland Beltline and Taxpayers Association and participated in community events.

"They are there at any public meetings we hold with our stakeholders and have a great presence in the neighborhood, and it's a genuine presence," Cammarata said. "They are just not there to make sure Albright-Knox is on the attendance sheet."

The museum's AK Public Art mural program also continues to operate while the main campus is under construction. Shantell Martin's "Dance Everyday," a mural the program helped support, is located around the corner at 537 E. Delevan St.