As Tywanda Cross approached the end of her pregnancy, she expressed feelings familiar to many first-time mothers.

“I was concerned about going through labor and delivery,” she said. “It was my first child. I was kind of nervous but ready to get the baby out.”

Thanks to the guiding words and actions of two doulas from an innovative organization called Durham's Baby Café, Cross is one of hundreds of women who have received health advice, emotional support and a few timely gifts as they navigate a monumental change in their lives.

The cafe's success in addressing issues that challenge families in one of Buffalo's poorest neighborhoods helped inspire the State Health Department this year to launch a pilot program to pay doulas in Erie County up to $600 to nurture each Medicaid-eligible mother-to-be.

“Some organizations say they do great work like this,” said Briana Jegier, associate professor of health economics at D’Youville College. “They’re doing it here and getting results.”

Jegier is among a growing number of people who learned about Durham’s Baby Café – the first of its kind in the state – and chose to foster its work.

Churches, Catholic Health, Hope Buffalo and others have donated diapers, clothes and food to help stock the baby café pantry, as well as provide free dinners to mothers, many with children in tow, who gather Wednesday and Thursday evenings to learn how to build healthier families.

Café doulas and certified lactation consultants use the March of Dimes “Baby Basics” book to create a written birth plan to help expectant mothers move month-to-month through pregnancy. They link them to health services if needed. They prepare them to breastfeed, stay with them for nonmedical support during labor and delivery, and pay at least one home visit in the weeks after a baby is born.

“It is a total community effort,” said the Rev. Diann Holt, an ordained chaplain who founded the nonprofit café while she worked as a minority group specialist with the State Office of Children and Family Services. She has continued to serve as café executive director since she retired in 2015. 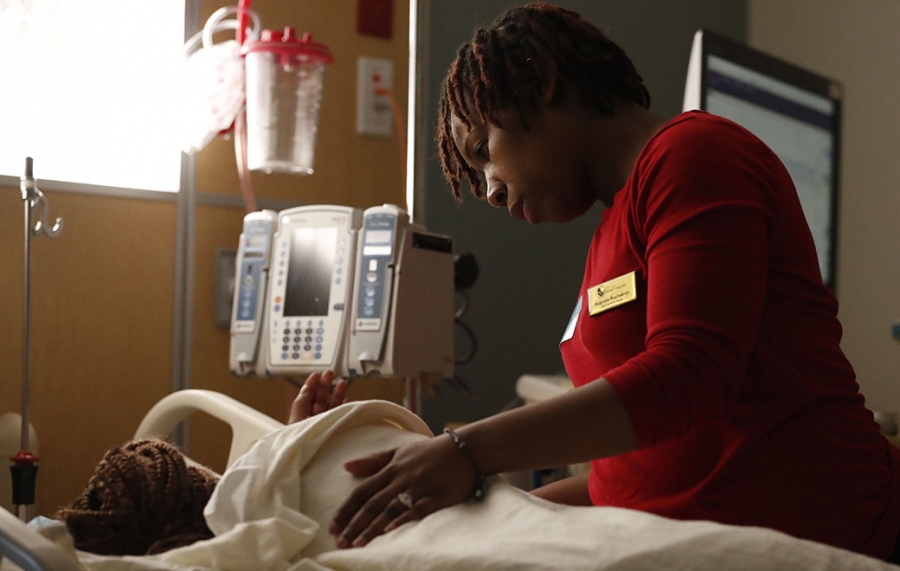 Augusta Rochebrun, a certified doula and lactation consultant with Durham's Baby Cafe, comforts first-time mother Tywanda Cross, 23, as Cross experiences a contraction during labor at John R. Oishei Children's Hospital. Rochebrun is among several women who first came to the cafe when she was pregnant for help with prenatal and breastfeeding support, and now volunteers to do the same for newly expectant moms. (Sharon Cantillon/Buffalo News)

The campus that houses the café sits in a primarily African American community. A black teen, aged 15-19, is nearly five times more likely to get pregnant in Erie County than a white teen in the same age group. A black child in the county is more than twice as likely to die during the first year of life, according to the most recent national county health rankings from the University of Wisconsin Population Health Institute.

Neighborhoods where social determinants of health – including violence, substance abuse, and limited access to transportation, adequate housing and healthy food – factor considerably into those statistics.

“African American mothers die at a three to four times greater rate during childbirth or thereafter than our Caucasian sisters,” Holt said, “so it’s very important that they receive the kind of support that’s going to assist them. This is a matter of life and death because people are lacking in knowledge – and that’s across the board, from the doctors all the way down to the mothers.”

The café uses evidence-based strategies to help moms make healthier choices. Most of the women who volunteer and are helped here work in service-sector jobs with modest pay, Holt said. 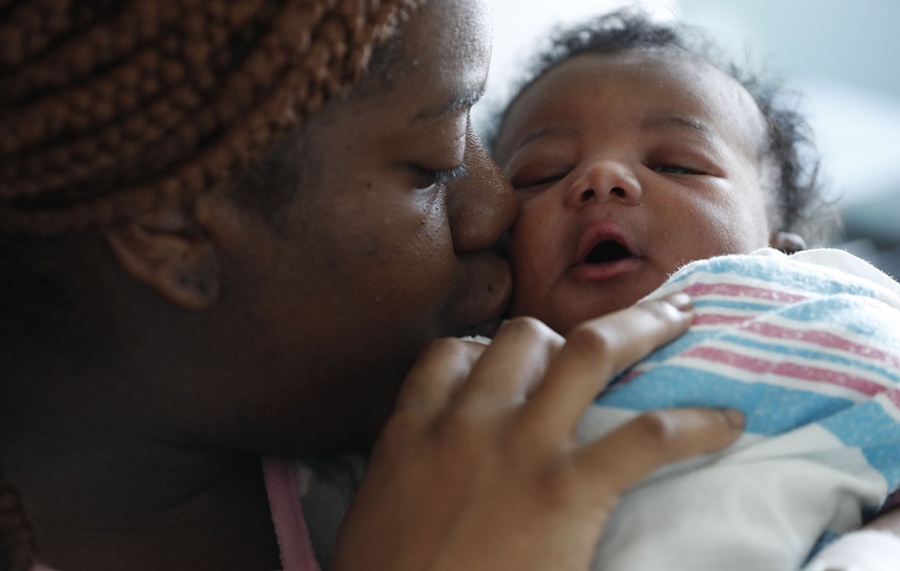 Tywanda Cross, 23, soldiered through a pregnancy that lasted more than two weeks past her due date, and ended with 23 hours of labor that included inducement and a C-section, before she got the chance to kiss her newborn son, Loyalty. (Sharon Cantillon/Buffalo News)

Rhonda Butler, one of the birth doulas who helped Cross, is a caseworker with New Directions Youth and Family Services. Augusta Rochebrun, the other, is an early childhood educator with Head Start. She first came to the café when she was pregnant with her now-5-year-old son.

Catholic Health and Children and Family Services educators regularly visit the café to teach expectant mothers CPR, how to breastfeed and how to properly install a child car seat. The educators caution about pregnancy risks and complications. They also stress the importance of child immunizations. 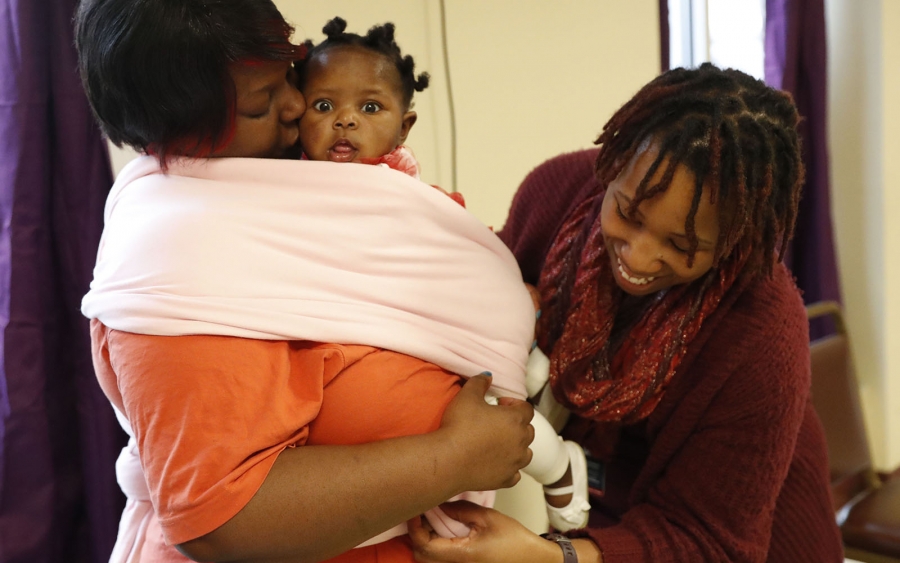 Durham's Baby Cafe provides support in several ways to expecting and new moms, most of whom live in Buffalo, but some who come from as far away as Niagara County. Doula Augusta Rochebrun helps get a baby wrap on Jasmine Hardy and her daughter Janelle, 6 months old, during a cafe gathering earlier this year. The cafe is open Wednesday and Thursday evenings in the Durham Memorial AME Zion Church community center, providing free meals to the families who attend. (Sharon Cantillon/Buffalo News)

More experienced mothers keep watch on the young children – including “Baby Café Babies” born with help from café volunteers and moms – so expectant mothers can focus on those lessons.

New mothers are welcome to pick out a baby wardrobe from a café clothing closet during their first visit back after delivery. 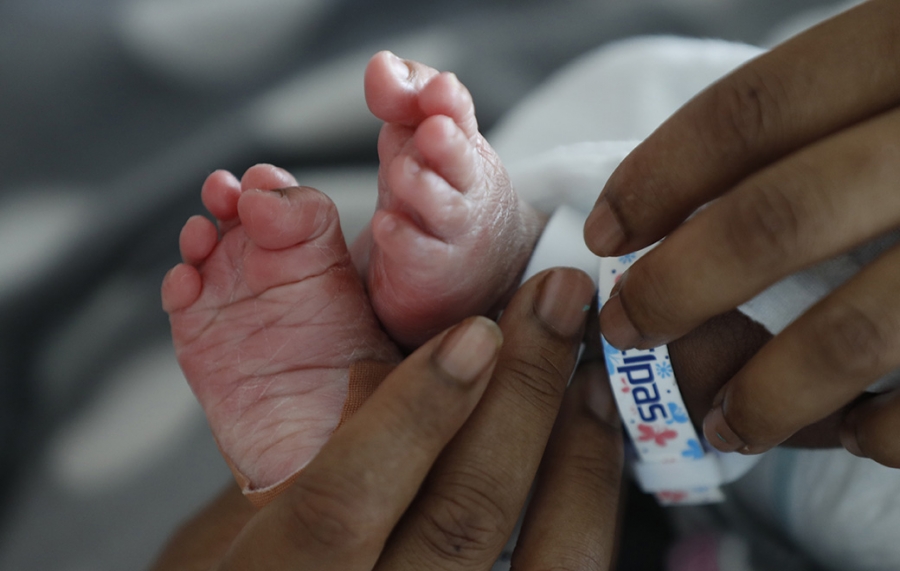 “I’m lucky it was free,” Tywanda Cross says of the help she received from Durham's Baby Cafe during pregnancy, labor and delivery, and the first few months of motherhood. Her baby's heart rate dropped after more than 20 hours of labor and health providers performed an emergency C-section. Despite the challenges, which required a longer hospital stay, Cross expressed fascination the day after Loyalty was born with his little feet and wondered if she should get a tattoo of his footprint. (Sharon Cantillon/Buffalo News)

The café is part of a larger effort by Holt, who also is the Western New York representative of the New York State Taskforce on Maternal Morbidity and Disparate Racial Outcomes. The task force lobbied for the Erie County pilot program that pays doulas up to $600 for coaching  Medicaid-eligible women through the prenatal period, labor, delivery and post-childbirth.

“This service should be available to any family that would like support, not only families that are in a better position financially,” said Shannon Johns, CEO and founder of Calming Nature Doula Service & Center on the West Side. She has seen business grow since the program started in March. 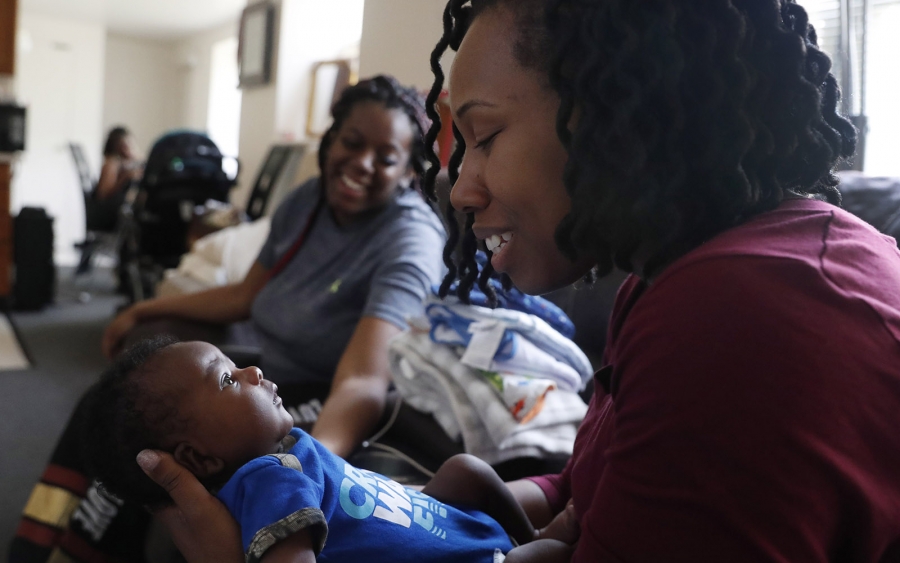 Doula Augusta Rochebrun, from Durham's Baby Cafe, pays a postpartum visit to Tywanda Cross three weeks after Cross gave birth to her first child, a son she named Loyalty. Rochebrun stopped by to find out more about mother-and-baby routines, including feeding and sleeping patterns, diapering, breastfeeding and how mom was adjusting and sleeping. She also checked on Loyalty's development and made sure Cross had scheduled a medical checkup and immunization appointments. (Sharon Cantillon/Buffalo News)

During a state Health Department listening session on maternal mortality last year in Buffalo, and during baby cafes, expectant mothers who are black have talked about feeling judged – particularly if they arrive for labor and delivery without a father – and say the pain and suffering they experienced during the process often went under-addressed.

Jasmine Handy, whose latest delivery was high risk, is among them. The baby café provided a doula and arranged an Uber ride when she delivered her third child while her husband stayed home to care for their two other children, one of whom has autism.

“Sometimes, this feels like the only place we can come where anyone cares,” Handy said of the café. 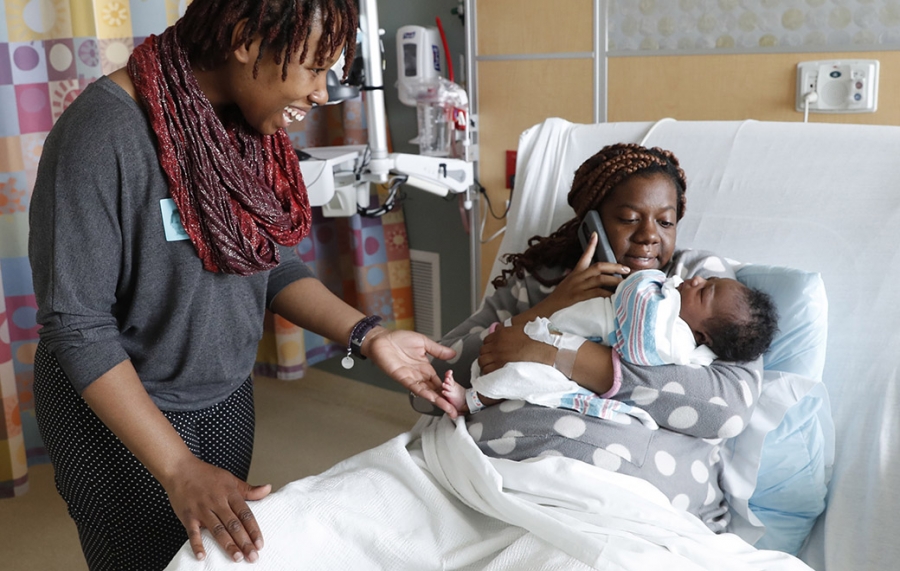 Doula Augusta Rochebrun arrives the day after Loyalty was born to get her first glimpse of the 11-pound, 8-ounce boy. His mother, Tywanda Cross, expressed relief that she already felt much better after a challenging labor and delivery. Rochebrun turned over the last few hours of the labor process to Rhonda Butler, another doula with Durham's Baby Cafe. (Sharon Cantillon/Buffalo News)

Cross – who spent 23 hours in labor – has been among the beneficiaries of free doula care. She gave birth May 18 at John R. Oishei Children’s Hospital to a boy named Loyalty. He arrived at 11 pounds, 8 ounces, more than two weeks past his due date.

She joked this month that she probably ate more than she should have – and figures that’s why Loyalty got so comfortable in her womb. She credited her son’s continued good health to her decision to take care of herself while she was pregnant, get prenatal care at the Erie County Medical Center Family Health Center, and visit Durham’s Baby Café after she learned about it six months into her pregnancy.

Rochebrun walked the Children's Hospital birthing unit hallways with Cross, helped her breathe through the contractions, and take a shower. The two talked about when an epidural might be appropriate; it turned out to be about 14 hours into labor, shortly before Rochebrun turned her duties over to Rhonda Butler, another doula with Durham's Baby Cafe. 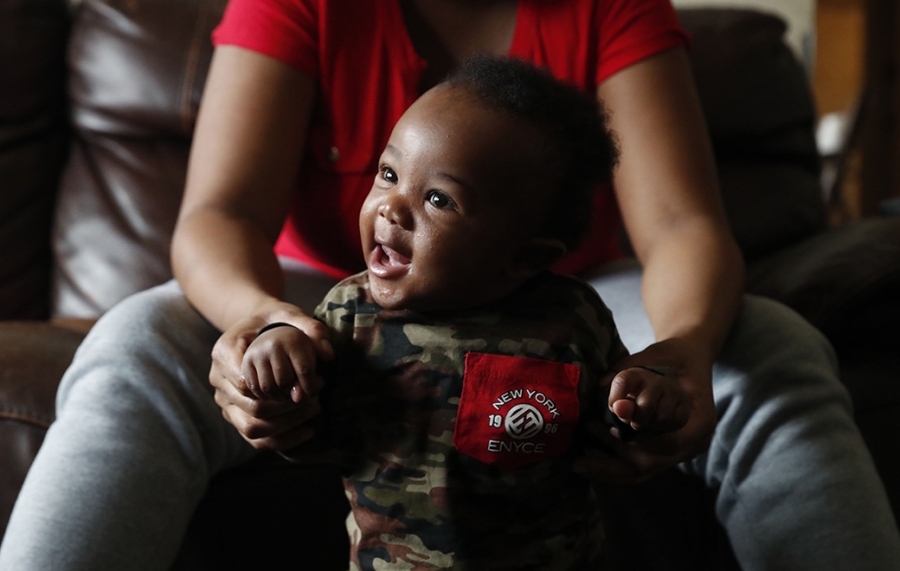 Tywanda Cross and her son live with her aunt, Tina Manuel, near the Broadway Market. They take turns caring for Loyalty so Cross can work second shift at the city bus station. Cross hopes one day to work in the health field. (Sharon Cantillon/Buffalo News)

Seven months later, Cross and her son live with her aunt, Tina Manuel, in a two-bedroom flat near the Broadway Market. They take turns caring for Loyalty so Cross can work as a custodian at the city bus station. She’s been promoted once since she got the job three months ago and hopes to soon land work at the Buffalo-Niagara International Airport. She would one day to like work in the health field.

Achieving those aspirations likely will put her out of Medicaid eligibility. That doesn't matter to the doulas at Durham’s Baby Café, who have yet to tap into the pilot program they helped inspire. They will continue to offer their services free to women across the Buffalo-Niagara region, regardless of color or the size of their bank account, should they reach out to the café.

“We bring in working mothers who understand the community that they're giving back to,” Holt said, “and they come and they give their heart and their hard work in this program with no expectation of reimbursement.”

Funding for the effort can at times be sporadic, she said, “but every time it looks like it's gonna cave in, guess what happens? Somebody does something miraculous and I'm smiling.”