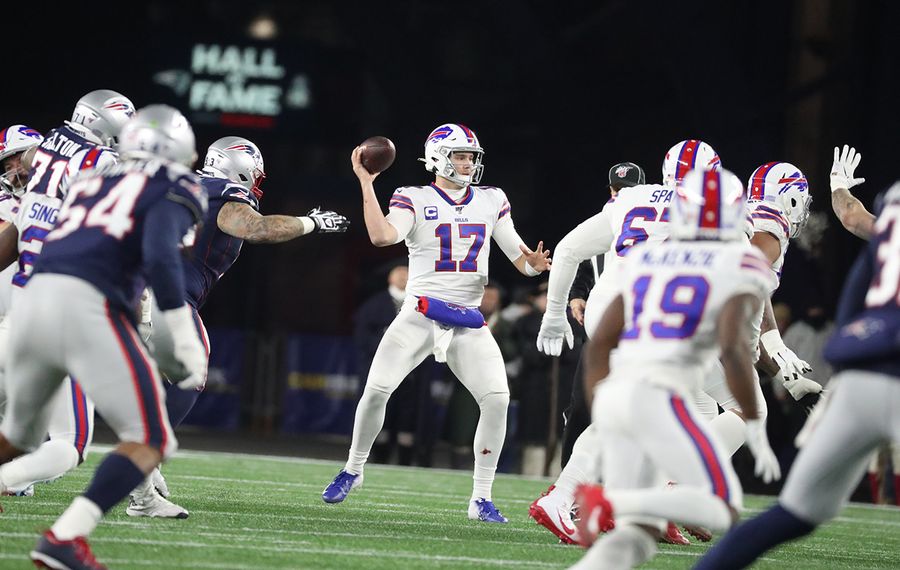 FOXBOROUGH, Mass. – Josh Allen had completed only 15 passes that traveled 20 or more yards past the line of scrimmage in the first 14 games of the season.

It wasn’t enough to rally the Bills to victory. But Allen played a lot better than in the first meeting against the Patriots, when he threw three interceptions and had a quarterback rating of 24.0.

This time, Allen had two touchdown passes, no interceptions and a 102.7 quarterback rating.

1. Smoke to the post. John Brown beat Stephon Gilmore on a deep post pattern for a 53-yard touchdown that put the Bills ahead, 17-13, in the third quarter.

Brown made a great fake to the outside, which caused Gilmore to turn the wrong way and get himself out of the play.

Meanwhile, Allen had to show off his rocket arm. After faking a handoff, and rolling to the right on a naked bootleg, he bought himself a fraction of a second by stepping back and getting the pass off before taking a big hit from defensive end Lawrence Guy.

“I don’t think people realize what a difficult throw that was – and how early he threw it, before Smoke even really made his break,” said Bills backup quarterback Matt Barkley. “He just trusted where he was going to be and threw it to the spot. It was really a fantastic play.”

“So it’s naked and you’re pulling up,” Allen said of his roll to the right. “Guy in my face, I saw Smoke make a really good move and I just let it go up, and he made the play. I really didn’t even see where the ball went but heard everybody screaming and yelling. That’s one that was good to hit because we’ve been practicing on that play for awhile and finally got to utilize it. Smoke made a play.”

Brown had too much speed for deep safety Devin McCourty.

“It was a double move with a pump,” Brown said. “It was a great call and a great throw by Josh and a great block by the offensive line.”

It was the first TD given up by Gilmore this season. McCourty and Gilmour apparently didn’t think Brown was going to run deep on the play.

“We kind of thought we had a bead on the play and we tried to be aggressive on it,” McCourty said. “A call I made in the secondary where we try to be a little more aggressive ... you get beat on a touchdown. I came to the sideline and I’m like, ‘We’re not going to run that anymore.’ ”

2. Drop in the bucket. Allen set up the Bills’ first touchdown with a 33-yard pass to rookie tight end Dawson Knox down the left seam. Knox was ruled down at the 1-yard line, which set up a TD pass to left tackle Dion Dawkins with 1 second left in the half.

Knox has had some trouble with drops this season. But he hung on despite the fact safety Patrick Chung was tugging on his left arm.

“It’s just a corner route,” Knox said. “Josh made a great throw. I had a little bit of separation on the defender. He just dropped it right in there and made it easier on me. I was hoping I’d scored but I was happy Dion got the touchdown.”

Allen had missed Knox with an overthrow of a corner route down the left side in the end zone on the Bills’ first drive of the game.

“I think he learned from the first time earlier in the game, just to give him a chance and let our guys win those matchup battles,” Barkley said. “On all crosser routes, the Patriots try to undercut everything, so throwing over the top is where you gotta go.”

3. Late miss to Knox. With 1:55 to go, Allen had Knox open again, a step behind Chung, in the left side of the end zone on a first-and-goal play from the Pats’ 15. The pass was overthrown.

“The next throw, a game of inches,” Allen said of the play. “I’ve got to put it on Dawson there.”

“It was the same exact route, but I had to shorten it because we were in the end zone,” Knox said. “Part of me thinks maybe if I would have laid out for it I would have got it. But hindsight is 20-20.”

4. Bullet to Beasley. Allen had three completions that went 20 yards beyond the line of scrimmage. The third was a 25-yarder to Cole Beasley to the Pats’ 8 with 2:21 remaining. Again, it took Allen’s elite arm strength to zip the pass between defenders to the receiver, who ran a deep dig route up the right seam.

“That was on the run to his right, throwing back across, which again is a very difficult throw,” Barkley said. “He makes it look effortless.”

5. The final incompletion. Beasley was open in the back corner of the end zone on the Bills’ final play, fourth-and-goal from the 15 with 1:12 to go. But the Patriots got quick pressure with a four-man rush, and Allen didn’t have enough steam on the throw. It allowed J.C. Jackson to break up the pass just as it arrived to Beasley.

“As far as the fourth-down play, they brought zero coverage, and I tried to make a play and just give somebody a chance,” Allen said. “But when we get down there, we’ve got to get it in the end zone, there’s no doubt about that. That’s on my shoulders, and there’s things I could have done differently throughout the game, especially early on, taking some early completions and just finding a way to get in tune and get in rhythm early on in the game.”

Said Beasley: “I told him he did a helluva job at least giving me an opportunity. That’s all you can ask when they’re bringing pressure like that. He’s got to give us enough time to get down there. I was running kind of what Robert was running earlier. I clear out, and then I break to the back pylon. It’s a play we’ve worked. But it just wasn’t enough today.”

6. Pats’ big play. New England’s decisive fourth-quarter touchdown was set up by a 30-yard pass from Tom Brady to Julian Edelman, who ran an arrow route across the field against zone coverage. It was a first-down, play-action fake, and safety Jordan Poyer missed a tackle 12 yards downfield.

“They ran the counter pass,” Poyer said. “It’s one of their things that they run in their game plan. Hard play action got a linebacker sucked up, and he was able to hit him over the middle. It’s just a play I’ve got to make. I’ve got to make that tackle.”

7. Big fourth-down stop. Cornerback Kevin Johnson closed fast to tackle receiver N’Keal Harry on a jet-sweep run wide around left end late in the second quarter. The stop gave the Bills the ball at their 41 and set up a TD drive to end the half.

“Based on the situation I was just aware and tried to make a play,” Johnson said. “I was on the receiver. When I saw the runner coming over, I was reading his body language that he was actually going to get the ball and I just kind of shot it because I knew they only needed a yard.”

With division dreams dead, Bills should use Week 17 for rest