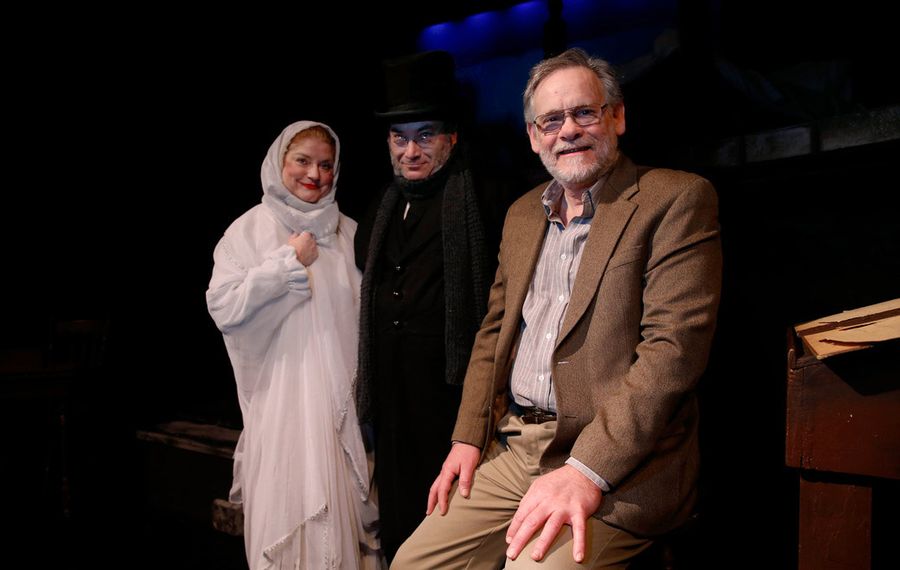 Melanie Vona is living proof that Neal Radice got it right. At 23, Melanie joined about a dozen relatives for Thursday’s performance of “A Christmas Carol” at the Alleyway Theatre. Her parents, true believers in seeing that show each year, brought her for the first time when she toddled.

For Radice, that is the best of possible reactions. It helps explain why he began the play downtown 37 years ago, not long before he formally opened Alleyway in an old Greyhound bus station a few doors away from Shea’s Performing Arts Center.

That happened amid an era of struggle downtown. Many stores and businesses were shrinking, closing down or moving out, taking with them Christmas energy that once transformed the streets. Radice was left to wistfully recall his childhood, when his tavern-owning father and mother “would pour us all into a station wagon” for a Yuletide chance to marvel at downtown lights and crowds of shoppers.

He could not stand watching all that go away. He was working at the time at the old Studio Arena, and he looked around at all the wildly varied versions of “A Christmas Carol,” offered on the theory that people had grown weary of seeing the Charles Dickens classic portrayed in the same old way.

Radice had an opposite belief. He paid $500 to buy old costumes for the show – no small figure in early 1980s dollars – and decided to take his own more traditional crack at it. Not long after he got started, a friend named John Smeathers, a British actor Radice met at a downstate festival, sent him a copy of the Charles Dickens novella, accompanied by the great author’s “notes and cross-outs.” 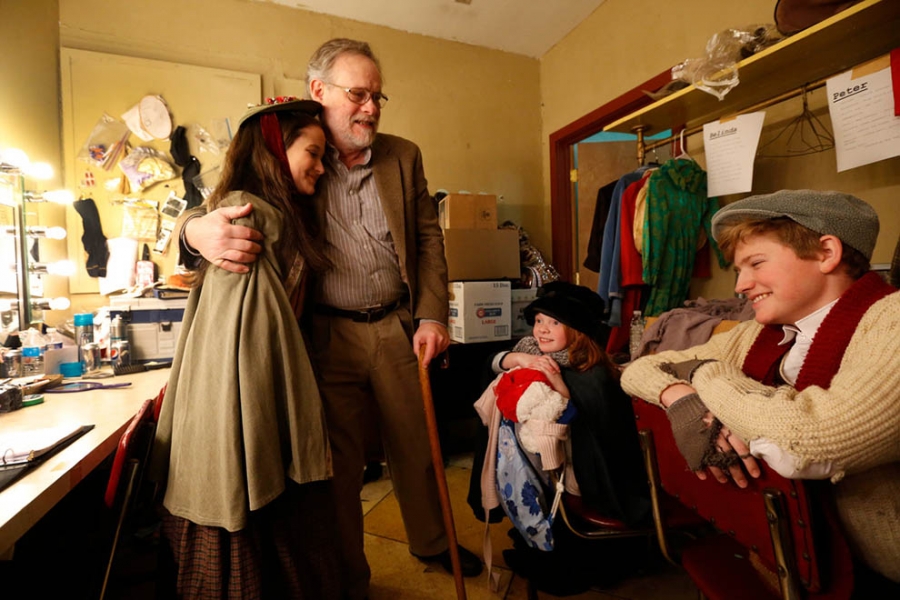 Neal Radice, founder and executive director of Alleyway Theatre, with several children who act in the play. From left are Allison Barsi, 16, now in her fourth "A Christmas Carol," Caoimhe Krueger, 9, and Joe Bilecki, 14. (Sharon Cantillon/Buffalo News)

Using that copy as his basis, Radice wrote a script. By 1985, he was offering his own version of “A Christmas Carol” behind a specific goal. He refused to accept that downtown Buffalo, at the holidays, was a place of used-to-be. Radice believed he could create a long-lasting, flesh-and-blood attraction to bring people back at Christmas.

It worked, beyond even his best hopes.

Sunday is the last performance of the 2019 version of the play. The 100-seat theater has been sold out for all 14 shows, loyalty Radice sees as built upon a message that never gets old. The 37-year run in Buffalo is believed to be – how could it not be? – among the handful of longest-running productions of "A Christmas Carol" in the nation.

He alters almost nothing. Patrons like it as it is. He remembers one year when he gave the spectral Ghost of Christmas Future a pair of burning red illuminated eyes, thinking the audience might appreciate a more ghastly effect.

They hated it. The next year, the eyes were gone. 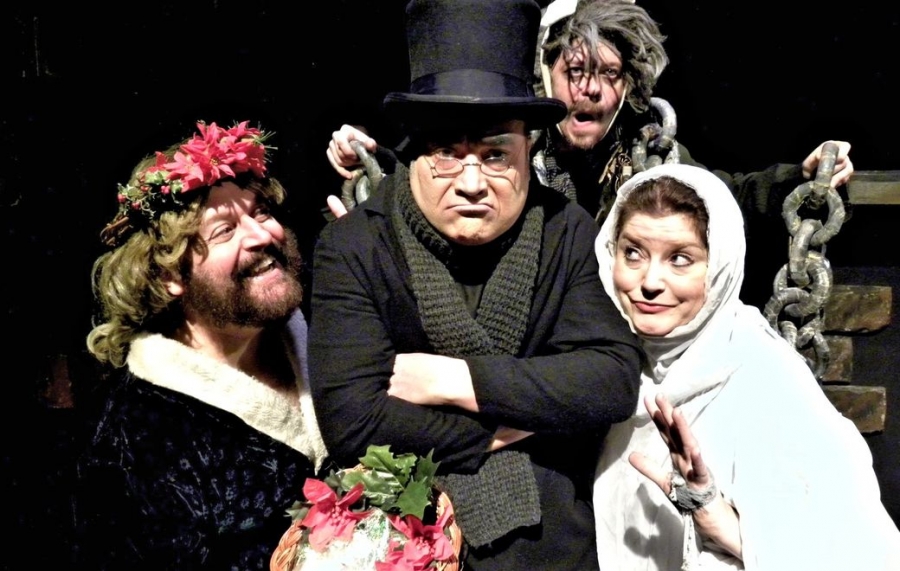 Yet the most monumental element of the place is about to change. Radice, 71, will retire next spring as artistic director at a theater where he spends most of his time focused on brand-new plays. The moment is right, Radice said. He loves Alleyway, and he said it is important for it to continue "with an injection of new blood."

He will be succeeded by Chris Handley, now the associate director. Radice said last week he has no idea if Handley wants him to return a year from now to direct “A Christmas Carol” for the 38th time.

Friday, Handley laughed softly upon hearing that question. His goal, he said, is nurturing the spirit of originality that is a hallmark of Alleyway.

As for that one certain throwback play, performed every December? 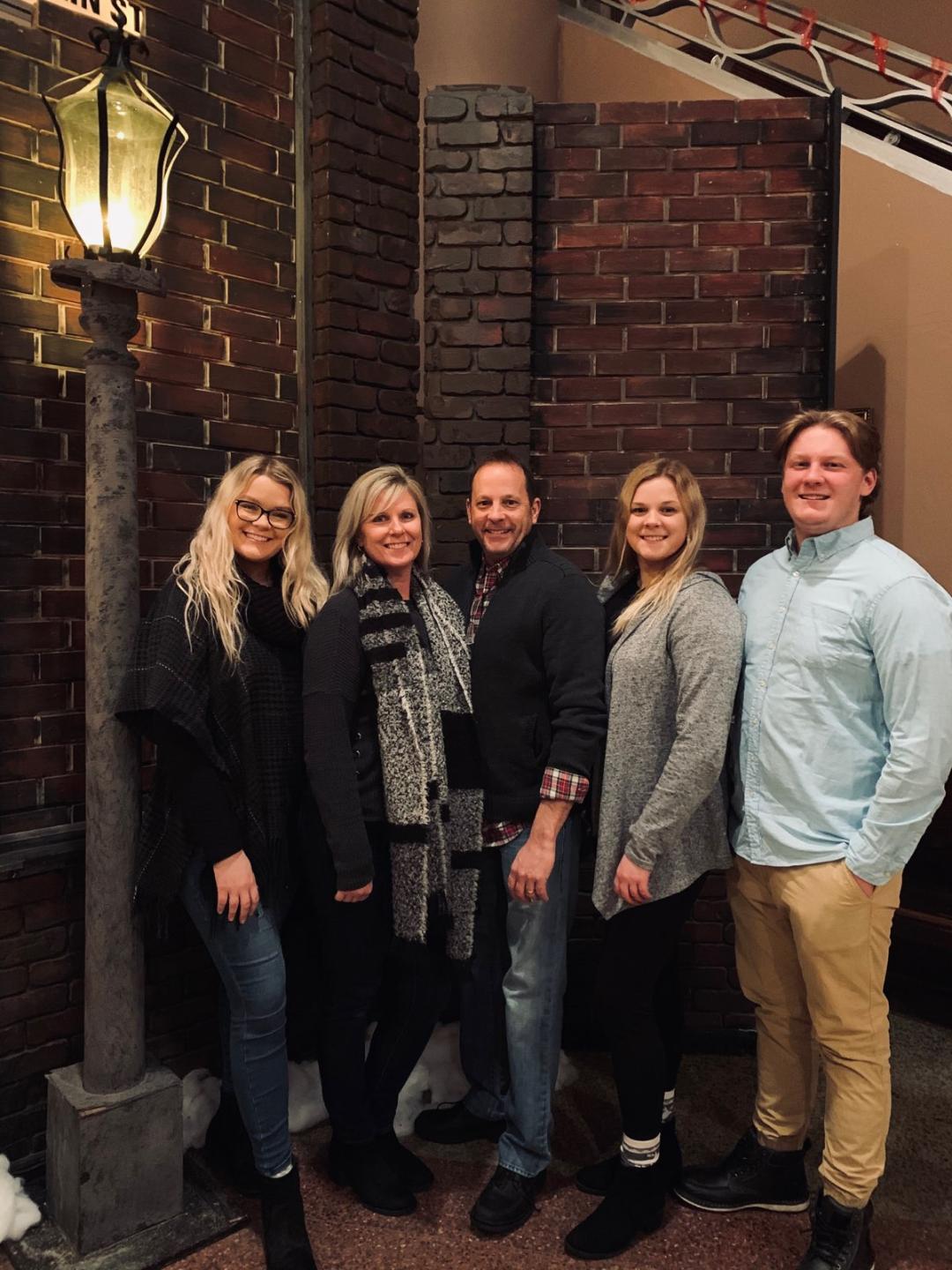 The Vona family, from left: daughter Melanie, parents Kelly and Brian, daughter Mollie and son Sam at the Alleyway Theatre for "A Christmas Carol." (Family photo)

“If we didn’t give them ‘A Christmas Carol,’ I think we’d have a riot on our hands,” Handley said.

So it will go on, undoubtedly with Radice as guest director, sustaining a warm tradition amid a rising downtown trajectory. “Oh my God, it’s a different place,” Radice said, recalling the years when the district around him felt lonesome and forgotten.

The play, as Radice hoped, adds to that energy through a kind of passionate consistency. Actors tend to stay in their roles for a long time; this year's version is dedicated to Jerry Hudson, a rock music pioneer in Buffalo who died in November after many years of playing Bob Cratchit, a role now handled by John Panepinto.

The honor of portraying Scrooge – which has gone to a short list of actors, including Smeathers – has belonged for the last seven years to David Mitchell.

“It’s a story people seem to need,” Mitchell said. “It follows someone going through it all and in the end trying to change for the good, and I feel very privileged to be doing it.”

The script, while true to Dickens, allows Radice to put his own gentle emphasis on events. For years, he served as the narrator while playing Fred, Scrooge’s nephew. While some might see it as a minor role, Radice said it is Fred – with his humor and forgiveness, despite few possessions in the world – who provides a moral center and provokes Scrooge into a life-changing reverie.

In an example of just how long this has kept rolling, Radice surrendered that part when he reached a point in life that was, well, more physically similar to Scrooge than to his nephew.

Joyce Stilson, the Ghost of Christmas Past, is the longest-serving member of the cast, at 29 years and counting. Her crackling front-of-the-stage exchange with Scrooge at the end of Act One serves as an emotional threshold in the play – a hint, for the first time, of a heart amid the ice.

Stilson said she appreciates the subtle Radice touch. Actors who appear with bit parts early on reemerge as ghosts later in the play, a sign that Radice presents the saga as a dream. Stilson loves the way each show begins with carolers mingling with the audience before stepping into the first moments of the story, a means of providing a gently mystical transition.

Most important, she sees the themes of humility and self-examination as a kind of communal longing in a volatile time.

“What Neal has done is to focus on the message,” Stilson said. “We all have the power to make changes, to become a better person.”

Certainly, that is part of what always brings the Vona family back. Melanie was there with her siblings and her West Seneca parents, Brian and Kelly, regulars for at least 25 years. They were accompanied by such relatives as Brian’s brother and sister-in-law, Bruce and Maria, who love the play so much that the carolers from Alleyway sang at their wedding.

"It's kind of a reminder of what's important," said Brian, whose Buffalo Christmas – past and future – pivots off that downtown stage.