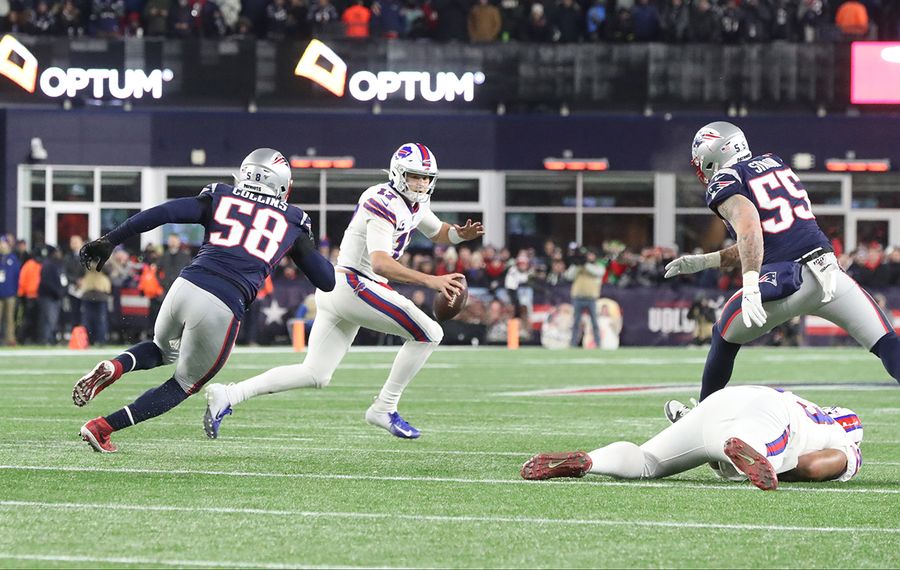 FOXBOROUGH, Mass. – Apparently, there are some things that simply aren't meant to be.

The Buffalo Bills beating the New England Patriots is one of them, regardless of any alleged vulnerability the beasts of the AFC East might be showing.

"It's frustrating," linebacker Lorenzo Alexander said. He knew he was speaking for more than himself and his teammates and coaches and others within the Bills' organization.

For the sixth time since Sean McDermott became Buffalo's head coach in 2017 and for the 32nd time since Tom Brady became New England's quarterback in 2001, the Bills wound up on the wrong side of the final score against the Patriots.

On Saturday at Gillette Stadium and in front of a national television audience, it was 24-17. On Sept. 29, when the teams played at New Era Field it was 16-10. Close, competitive, a reason for hope ... but still, not enough to close the deal.

"You can't come in here and be close," defensive tackle Jordan Phillips said. "You either got to blow them out or that is going to happen."

"Obviously, we have the talent to beat them," Alexander said. "We just haven't executed at a high enough level. And when you play championship-caliber teams, you have to do that and we, for whatever reason, don't."

Just as in the September meeting, the Bills faltered in key moments Saturday. That was enough for the Patriots to come back from a 17-13 deficit midway through the third quarter and improve their record to 12-3 while the Bills fell to 10-5.

The Bills showed plenty of heart and fight and even made, as they did in September, a reasonable case that they were on equal footing with the Pats.

As usual, however, Brady and his favorite target, Julian Edelman, were just too much. So, too, was Bill Belichick's coaching and the Patriots' defense and everything else that has allowed this franchise to win six Super Bowls.

Now, the Pats have an 11th consecutive division title to their credit. The Bills, who would have been alive to win the AFC East with a win and a victory next Sunday against the New York Jets as well as a New England loss to Miami, are locked in as a fifth playoff seed. Their wild-card opponent is unknown, but with no chance to alter their playoff position, the Bills' regular-season finale against the Jets has been rendered meaningless.

There wasn't a clear prize from Saturday's game, either, given the help needed from the Dolphins. But it was a major measuring stick and would have provided at least some indication of where the Bills are in relation to the NFL's gold standard.

As the Bills showed an ability to compete on big stages, such as the Sunday night playoff-clinching win at Pittsburgh, there was a growing sense they were on or close to equal footing with the Patriots. Just when it seemed Brady was looking more human at age 42 and he and the Pats might be on the decline, it was the Bills who slipped and fell.

"With 12 back there, there is always a chance for those guys to win a game," cornerback Tre'Davious White said of Brady. "You can never underestimate him. He is one of the best, if not the best, to play the game."

After a 20-yard Nick Folk field goal cut the margin to 17-16 early in the fourth quarter, the Patriots' vaunted defense shut down Josh Allen and the Bills. And Brady and Edelman proceeded to combine on a 30-yard connection to move New England to the Buffalo 29.

The Patriots worked their way to the Bills' 1, from where Rex Burkhead, whose first-quarter fumble led to a Bills field goal, managed to pull away from would-be tacklers while going around right end for the score. Brady then completed a pass to Edelman for a two-point conversion to make it 24-17 with 5:06 left.

"Obviously, you play well, to an extent, but you want to win the game," Alexander said. "So it's no moral victory or any way that we can spin it to make ourselves feel better. I think the only thing you've got is we know we can play with those guys, whether we're at home or away, so I guess there's no mystique in that sense. We know we can come in here and win. We just have to execute."

Perhaps, though, the Patriot Mystique did get the better of some Bills players.

Allen, for instance, struggled through much of the first half before stepping up in the face of pressure to find a wide-open John Brown for a 53-yard touchdown pass that put the Bills up, 17-13. He seemed out of rhythm with his receivers and generally uncomfortable in completing six of his first 13 passes for 62 yards and a 1-yard touchdown to offensive tackle Dion Dawkins.

"Yeah, I don't know," said Allen, who finished 13-for-26 for 208 yards and two TDs and a passer rating of 102.7. "Whether it's eagerness or anxiousness or just pregame jitters, I've got to find a way to get rid of that. Whether it's throwing more pregame or throwing more right before the game when I'm on the sidelines, just try to get in tune."

How quickly he can get that fixed could be the difference in the Bills' ability to advance in the playoffs or be eliminated in the first round, as they were during their previous postseason appearance in 2017.

The good news is that they won't be dealing with the Patriots for awhile. That's probably a good for a team that still hasn't figured out how to scale the tallest of all mountains.

"The Patriots are a good team, I'll never take the credit away from them, but we just keep coming up short," Dawkins said. "Hopefully, we should see them again and when we do, it'll be a different ending."

With division dreams dead, Bills should use Week 17 for rest