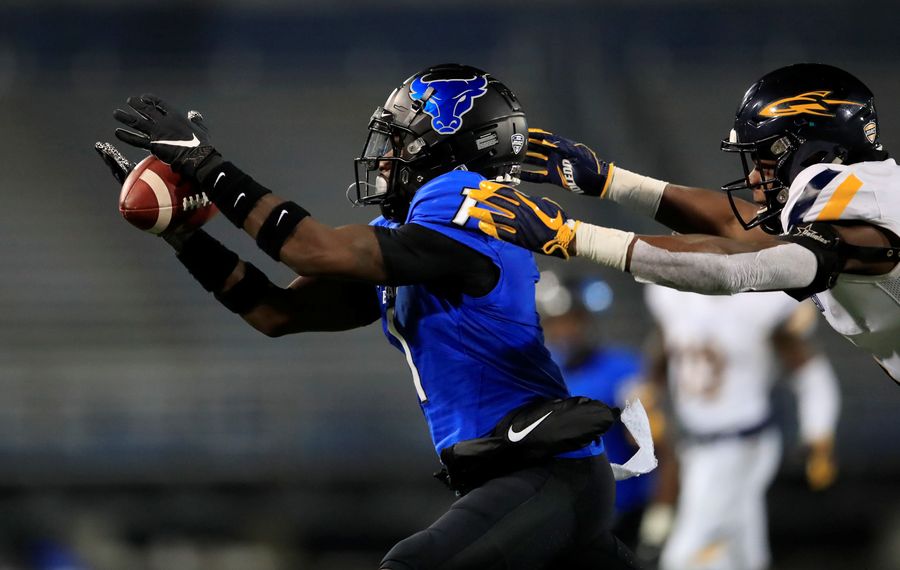 Last time out: UB defeated Bowling Green, 49-7, in its regular-season finale Nov. 29 at UB Stadium. Jaret Patterson ran for a MAC-record six touchdowns, and posted a school-record 298 yards on 26 carries.

Charlotte won, 38-22, at Old Dominion in its regular-season finale Nov. 30 in Norfolk, Va. Defensive end Alex Highsmith had 12 tackles and set a single-game record for sacks (4.5) and tackles for loss (5.0).

Bowl season kickoff: The Bahamas Bowl is the first bowl game on the 40-game schedule, which culminates with the College Football Playoff championship Jan. 13 in New Orleans.

Going for history: The Bulls earned bowl eligibility for the third consecutive season. The  Bahamas Bowl will be the fourth bowl game in program history and UB is seeking its first victory; the Bulls became an FBS program in 1999.

Connecticut defeated UB, 38-20, in the 2008 International Bowl in Toronto.

This is the third country in which UB will play a bowl game: Canada in 2008, the United States in 2013 and 2018, and the Bahamas in 2019. The Bahamas Bowl is the only international bowl game this year.

How the Bulls got here: The Bulls dropped their first two Mid-American Conference games, a 34-20 loss Sept. 28 at Miami (Ohio) and a 21-20 overtime loss to Ohio on Oct. 5 at UB Stadium, and were in last place in the MAC East Division. But UB won five of its final six games and earned bowl eligibility with a 49-30 win against Toledo on Nov. 20. Nine days later, the Bulls secured a spot in the bowl field with a win against Bowling Green in the regular-season finale.

Marquee running backs: To beat the Bulls, Charlotte will have to start by stopping UB’s running game. Led by the backfield tandem of Patterson and Kevin Marks, the Bulls are ninth in the nation in rushing yards per game (254.25 yards). Patterson is sixth in the nation in rushing and has run for a school-record 1,626 yards and 17 touchdowns, and Marks has rushed for 1,008 yards and eight touchdowns. It’s the first time in program history the Bulls have had two 1,000-yard rushers in the same season.

Passing fancy: UB quarterback Kyle Vantrease will make his eighth consecutive start. Vantrease is 93-for-155 passing for 1,116 yards and seven touchdowns, and has been intercepted once. Antonio Nunn is UB's leading wide receiver with 634 yards and five touchdowns on 44 catches.

Defense does it: UB’s defense is in the top 10 in the nation in four statistical categories: Fourth in the nation in rush defense (95.3 yards per game), seventh in total defense (293.1 yards), fourth in opponents’ time of possession (34 minutes, 12.25 seconds) and sixth in red-zone defense (69.23 percent, 27-for-39 opponent scoring opportunities). Also, the Bulls and Miami (Ohio) lead the MAC with 38 sacks.

For the foes: Six years after Charlotte resumed its college football program, the 49ers will play in their first bowl game as an FBS program. Charlotte played its first two seasons, 2013 and '14, as an FCS independent program, then moved to FBS in 2015.

Highsmith, a defensive end, is a first-team All-Conference USA selection, a third-team Associated Press All-America selection and a Sports Illustrated second-team All-American selection. A redshirt senior, he is the first Charlotte football player to earn the All-America designation, and he is one of three players tied for second in the nation with 14 sacks. Defensive back Marquavis Gibbs leads the 49ers with 94 tackles. The 49ers are one of four teams tied for 18th in the nation in sacks (36).

Running back Benny LeMay is Charlotte’s leading rusher with 1,037 yards and nine touchdowns on 180 carries in 10 games, and is also a first-team All-Conference USA pick. LeMay has back-to-back seasons with at least 1,000 yards rushing (he ran for 1,243 yards in 2018), and he has run for at least 100 yards in seven games this season.

Victor Tucker is Charlotte’s leading receiver, with 848 yards and six touchdowns on 49 catches.