With the $8.2 million restoration of the Graycliff estate in Derby recently completed, attention now turns to building a $5 million, floor-to-ceiling glass-facade visitor center.

"When people come to a Wright site there is an expectation of what they will experience," said Bryan LeFauve, the conservancy's vice president. "It's our hope that the new visitor center will deliver on that expectation by providing not only amenities but an opportunity for us to highlight the stories of Graycliff."

A capital campaign to raise the funds for the visitor center is expected to begin in the first quarter of 2020.

The visitor center's plans call for a main lobby and ticketing area, exhibit space, an indoor-outdoor cafe doubling as an event space, an administration area that includes a docent lounge and restrooms. The new visitor center would incorporate the current visitor center and feature an extended wood-clad green roof feature.

In addition, the plan calls for a parklike setting and an attractive pathway leading from the parking lot to the visitor center.

A new executive director, Anna Kaplan, came on board this month. She succeeds interim director Skip Ferguson, who filled in after Robert Wooler left last December.

The conservancy tapped SITU, a Brooklyn-based architectural firm working with HHL Architects of Buffalo to design the building and exhibition space.

"They came to the table with one of the best understandings of the site and the heritage, and all the necessary components that would make a visitor center appropriate," said Ann Casey, an architect and member of the visitor center design committee. 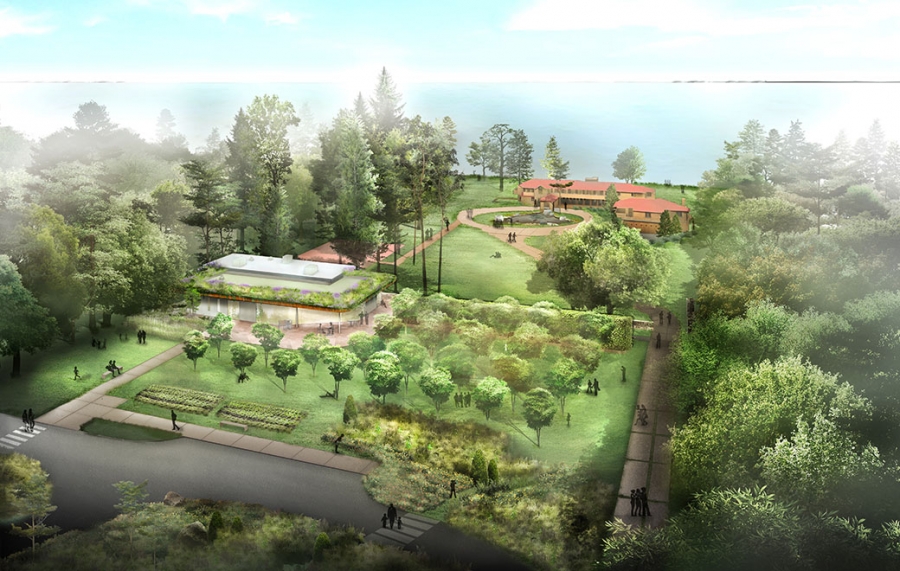 The plan calls for a parklike setting and an attractive pathway leading from the parking lot to the visitor center. (Rendering courtesy of SITU)

The current visitor center was a gym used by the Piarist Fathers, a Catholic teaching order. They bought the property from the Martins in 1951 and sold it to the conservancy in 1997.

"We have this old gymnasium that has really exceeded its lifespan as a gift shop and starting point for entering the property," Casey said. "It's not the welcome we want to embrace visitors with."

Exhibits are planned on Wright, the Martin family and Ellen Biddle Shipman, a landscape architect Wright chose to finish the landscaping. Correspondence between Isabelle Martin and Wright are among the historic documents.

"We are so proud of the story, especially that Isabelle Martin was the driver of this house," Casey said. "It was a home built by Darwin's wife."

Central to the project are using principles Wright espoused: a connection to nature, integrating buildings with the landscape and blending inside with the outside world. They were essential to Graycliff's design.

"We are being sensitive to having something that really fits into the property and is a complement to the house without being a distraction," LeFauve said.

The landscaping plan includes reestablishing pine trees along the entry road, restoring an orchard and vegetable garden, and providing landscaped pathways from the parking lot to the visitor center. The parking lot would be interspersed with shrubs and plants.

"We felt it was important to think of the experience from where you park your car approaching the building, which is generally not part of the consideration," said Basar Girit, SITU's founding partner. "Having this landscape passage with circuitous pathways and a lot of plantings enhances that experience. The landscape experience begins immediately."

Designers intend the planned visitor center, with its seamless starting point to enter the estate, to encourage people to stay longer. 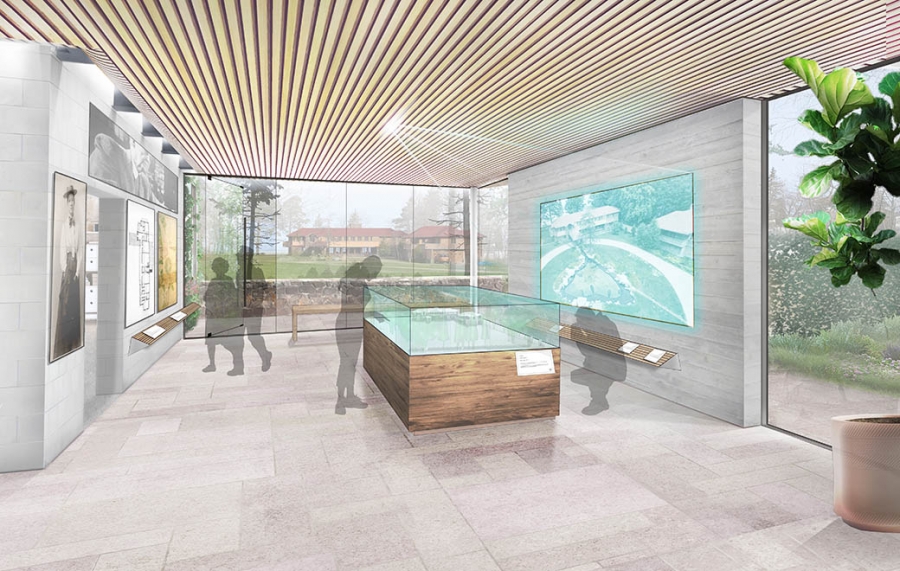 The new visitor center would replace the existing one, which had once been a gym. (Rendering courtesy of SITU)

The conservancy projects attendance in 2019 to reach about 11,000, the highest in the site's history, and it has set its sights on increasing that number. LeFauve said Buffalo's growing reputation as an architectural destination ties right into that."The priority of the conservancy was to restore and protect the Wright building," LeFauve said. "Now, with the increase of cultural and specifically architectural tourism in Western New York, we see the opportunity to really highlight not only the building and the grounds but the whole story behind Graycliff not only to the Western New York audience, but frankly a national audience."

"Anna is a person who has bridged the gap between the art and cultural world and the event experience, which will really allow us to bring those two worlds together," LeFauve said. "We are a historic house and an architectural masterpiece, but at the end of the day people want a great experience, and she is someone who can help us deliver that."

Kaplan, a Buffalo native, formerly owned BT&C Gallery, later rebranded as Anna Kaplan Contemporary. She was also part of the art consultancy Resource: Art, and she conceived and executed the event PLAY/GROUND, where nearly 30 artists took over a former school in Medina with installations in 2018 and 2019.

“With the interior restorations now complete and the landscape restorations finishing up this spring, Graycliff is poised to launch and I’m excited to share it with the public,” Kaplan said. "It's an underrecognized yet iconic place that deserves more attention."

The conservancy announced one change to its plan: A stair tower that extends from the cliff into the lake will not be reconstructed.

The decision was made because the beach has eroded. Also, the stair tower was not designed by Wright, and conservancy members felt the cost of restoring it would be better spent elsewhere. 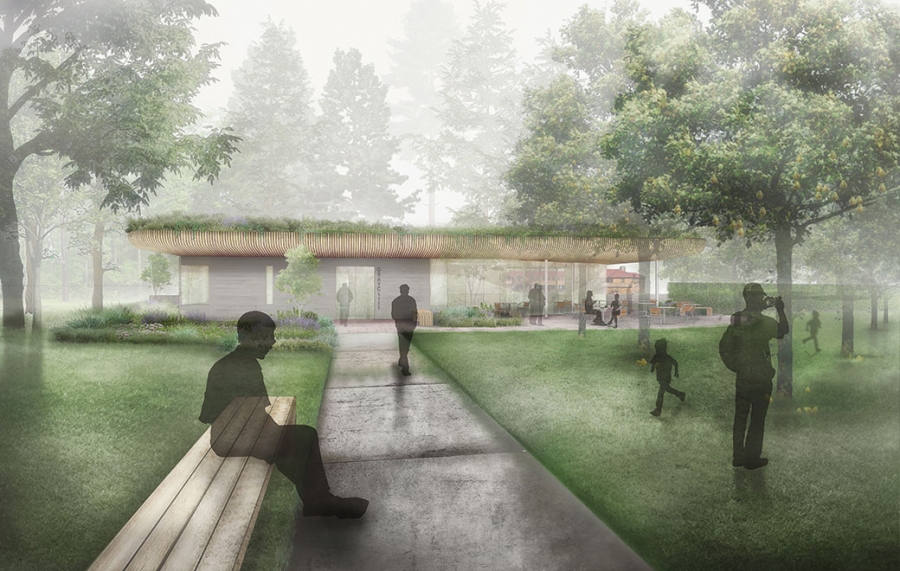 The conservancy says the design of the new center will complement the house without being a distraction. (Rendering courtesy of SITU)