Things are finally starting to feel normal again for the Jacobsen family of 11, a month after a fire ripped through their South Buffalo home and destroyed nearly everything.

"We did get a Christmas tree up," said the father, Anthony Jacobsen. "We're getting decorations. The kids are starting to get into the swing of things."

On Nov. 21, exactly a week before Thanksgiving, Alyssa Jacobsen, 15, awoke to a strange sound. It turned out to be a hoverboard on fire. She screamed and ran to her mother, Alicia. Alicia Jacobsen scooped up her sleeping newborn son and helped get everyone out of the house. They were all safe. But they had lost just about everything. Alicia Jacobsen wasn't even wearing shoes.

In the weeks since, friends, neighbors and strangers from all over Buffalo have rallied to help them.

"The community response has been unreal as far as clothing and food and people just reaching out and checking on us," Anthony Jacobsen said.

A friend set up a GoFundMe page that has raised more than $10,000. Food and clothing were donated through South Buffalo Football Association and the WNY Holiday Partnership, which includes The Buffalo News Neediest Fund, Toys for Tots and Resurrection Life food pantry in Cheektowaga.

And on Wednesday, Buffalo police officers with the Neighborhood Engagement Team took the Jacobsens' children to Target on Delaware Avenue to "shop with a cop," a holiday tradition among many law enforcement agencies in Western New York, including Amherst, Cheektowaga and Orchard Park town police departments and the State Police.

"We do a fundraiser every year between us and the" Erie County District Attorney's Office, explained Buffalo Police Lt. Marcus Rogowski. "We throw a party downtown and with that money, we take people shopping."

This year, they raised about $6,500, which included a $2,500 donation from Dean Gallagher from “Kids Event Tickets." That meant the police officers could do their usual shopping trip with 18 kids they've met through the course of the year through community events – but also help someone else out.

After seeing an article in The Buffalo News about the Jacobsen family, the community policing unit reached out to Anthony Jacobsen.

Wednesday afternoon, police officers arrived at the Jacobsen's temporary home to pick up half the kids. The parents loaded up the rest, including the baby, into the family's van, and rode up to North Buffalo. 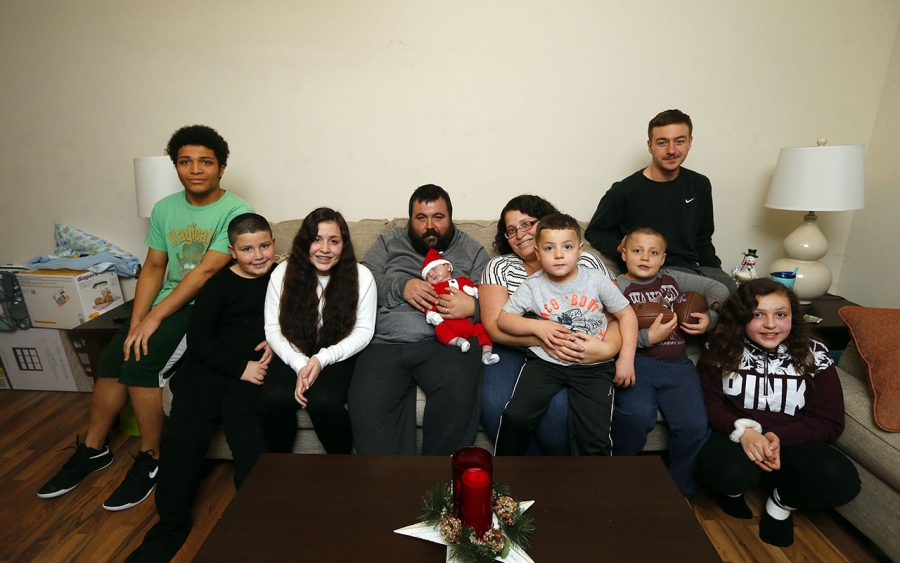 Upon their arrival at the Target department store, the Jacobsens created a mild stir among the some of the other shoppers as an assembled group of local TV reporters pointed cameras and microphones in their direction. The Jacobsens were also joined by Buffalo Mayor Byron W. Brown, Erie County District Attorney John J. Flynn and members of their respective staffs.

A brief news conference was held as the family lined up in front a display of greeting cards. Alicia Jacobsen expressed that her family was already overwhelmed by the generosity that the community had shown them, though there were still lost and damaged items her children were hoping to replace.

"Well, they feel that they need to replace their electronics because they're in withdrawal. Now, whether or not they actually need those things is a different story," she told reporters.

After the news conference, it was on to shopping for the Jacobsens, who broke into smaller groups, each accompanied by an assisting Buffalo police officer.

"It's going to be all socks and underwear," Justin joked with Elias.

"Yeah, all of it," Elias responded.

Instead they headed toward the bedding section of the store to find a new bedspread, sheets and pillow cases for their parents, as Elias regaled Coco with how he had recently renovated his own bedroom, including having replaced drywall and painting.

"Yeah, that was the old house. Sadly, I lost all of that," Elias said.

Coco shared that he enjoyed the part of his job that includes assisting those who were chosen to "Shop with a Cop." 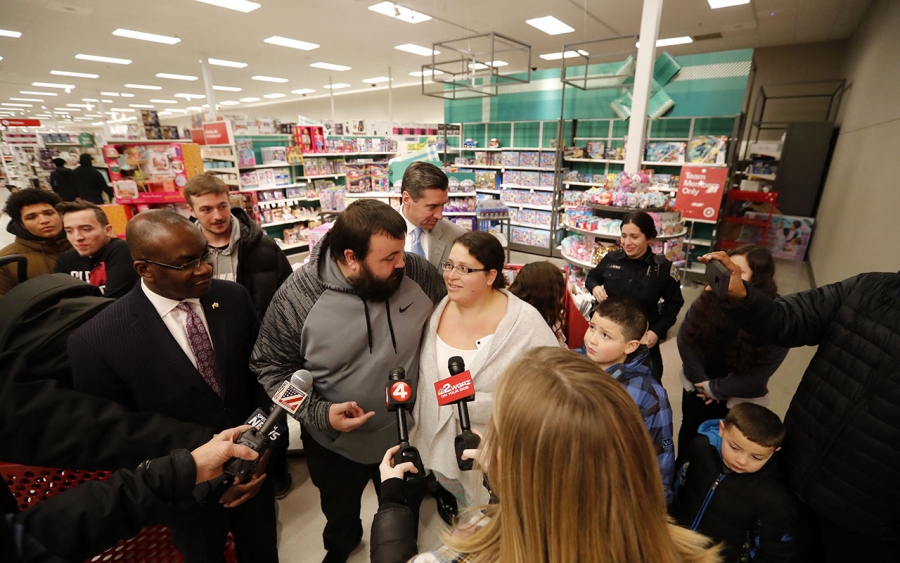 Anthony and Alicia Jacobsen speak with the media at Target in Buffalo on Wednesday, Dec. 18, 2019. (Mark Mulville/Buffalo News)

Headed in the opposite direction, toward the toy department, Officer Matt Inglut joined 4-year-old Lukas and his parents.

"I think we're getting closer to the toys," Inglut said, as Lukas struggled to push his red shopping cart.

Lukas immediately gravitated to a huge box that contained a Lego set for older children.

"This is too big for you. OK, baby?" Alicia Jacobsen said to her second youngest child, as the boy attempted to hold on to the massive box with the officer.

Inglut patiently directed Lukas' attention to Lego sets that were more appropriate for the boy's age and, eventually, Lukas settled on a Batman-themed set of Legos.

The only two girls in the family, Alyssa and 13-year-old Haley, were stealthy shoppers and a bit less obvious regarding their whereabouts Wednesday.

They turned up in the girls clothing department with Officer Joelle Bence, who tried to direct the girls' interest toward some knitted wool hat and scarf sets.

"I think it's awesome," Anthony Jacobsen said of the shopping spree earlier in the day Wednesday.

While the fire was terrifying and the damage was devastating, the father said his family has learned to be grateful for all that they do have.

"Our whole perspective on life has changed," he said. "We're just grateful for everything. Everyone's safe. For us, that's been key. Just remind us of that."

They survived a fire. Now this South Buffalo family of 11 wants to save Christmas.