Shivering amid the peeling paint and cracked plaster of the abandoned Hotel Niagara, Ed Riley said Monday that the long-dormant hotel will reopen on April 1, 2021.

"The ballroom will be brought back to its original historic character," said Riley, a hotel resuscitation specialist from Syracuse.

It seems like a heavy lift, but Riley, who brought the once-grand Hotel Syracuse back to life, said he's actually ahead of schedule here compared to how long it took to begin work on the Syracuse project.

Riley intends to renovate the 12-story Rainbow Boulevard edifice, which was a Travelodge when it closed in 2007, into a 160-room "four-diamond" hotel with three restaurants, a rooftop lounge and full banquet facilities.

So who's he targeting? Leisure, business or event markets?

"All of the above," Riley replied.

He also said the conditions facing him and his general contractor, Savarino Construction, aren't as bad as they might look to the untrained eye.

That's because previous owners did a lot of the interior demolition and asbestos abatement that the project calls for, and there is little mold in the building. 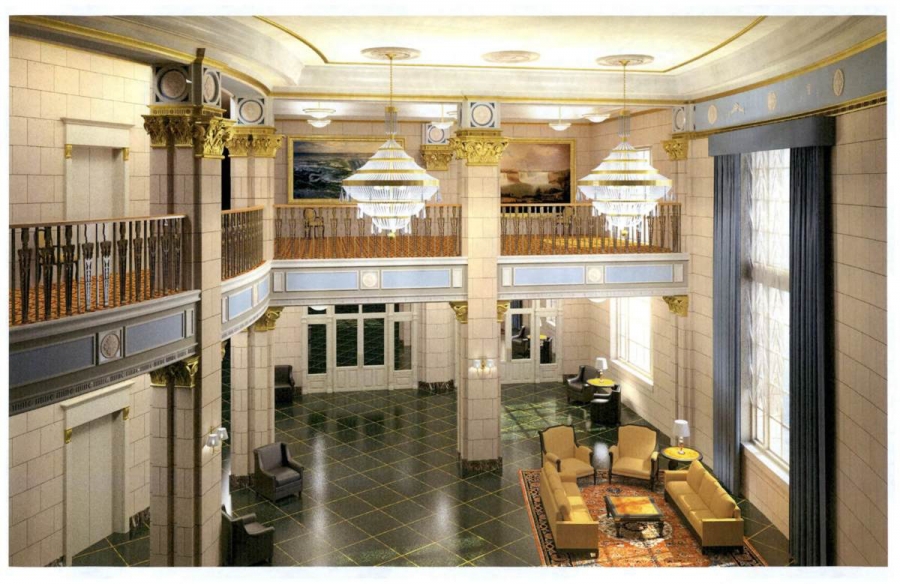 An artist's rendering shows how the Hotel Niagara lobby is projected to look when it reopens in 2021. (Courtesy Empire State Development)

"Anytime you're in a building that's this old, there aren't a lot of documents left on it, you're going to find some stuff," Riley said. "How quickly we discover those things and address them will basically be whether there's any major delays."

The Hotel Niagara will be flagged as a Tribute Portfolio hotel, a Marriott group of 25 other U.S. hotels, including the Reikart House, which replaced the former Lord Amherst Hotel on Main Street in Snyder.

Riley's assignment, the largest historic rehabilitation project ever in Niagara Falls, will cost $42 million, much of which will come from government incentives.

Those include $10.6 million worth of state and federal historic preservation tax credits and what Lt. Gov. Kathy Hochul said was an expected $3.5 million grant from Empire State Development. That money will be paid once the project is complete.

Riley said without the government help, "It eventually becomes an albatross that has to be torn down." 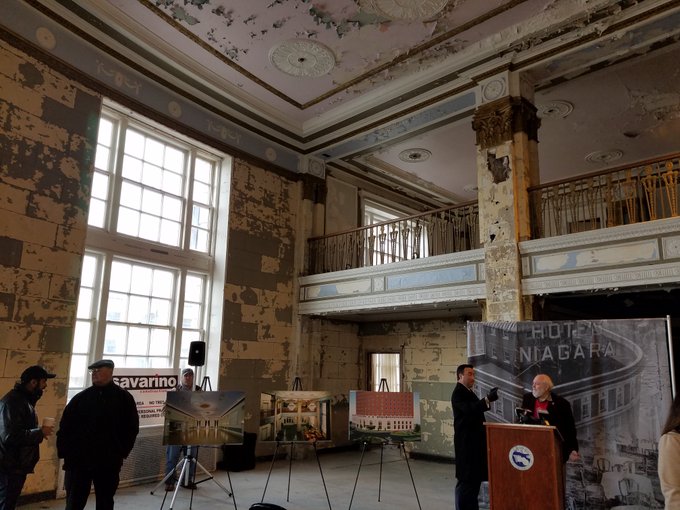 The lobby of the Hotel Niagara on Monday. (Thomas J. Prohaska/Buffalo News)

Riley said it would cost about half as much to build a 160-room hotel from scratch. But it wouldn't be the Hotel Niagara, which opened in 1924 and is now listed on the National Register of Historic Places.

"Once you get the pieces together on the financial side, the result you get is much better and it becomes a destination in and of itself," Riley said.

He said the people who have built new hotels in the Falls in recent years "don't get a brand and don't get the built-in loyalty of the community. It's a new hotel and it's very nice, people visit it, but how many weddings has it hosted? How many events and stories, that have been told about this (hotel)?"

"Soon we're going to have the grand old lady of downtown Niagara Falls, the Hotel Niagara, back in operation," said Mayor Paul A. Dyster. "What a fantastic project."

He joined Hochul and Assemblyman Angelo J. Morinello in smashing sledgehammers into a pillar in the lobby to mark the official start of the renovation project.